February Avatar: Time to Wake Up!!
Welcome to the Official SFG Forum
!!! Happy Gardening in 2022 !!!
Search
Latest topics
» Plant Probiotic (EM-1) that got rid of whitefly
by KiwiSFGnewbie Today at 5:50 pm

anyone growing potatoes in 5 gallon buckets as a complement to your SFG?

I'm doing something similar with some potatoes in one of those old "bullet" shaped BBQ smokers.

I'm pretty much using mostly Mel's mix (maybe a bit heavy with the compost because I have plenty of compost).

So far, so good, but I don't expect to be able to harvest any taters for a couple more months.

I used mels mix for the layer that I planted the seed spuds in and then to be honest I have played around with the other layers. I ran out of mels mix so used some compost with a little extra peat mixed in. Then I made some MM and put a bit of that on top. Now I am onto straw... not sure how that is going.

You can use the same soil for a second planting of spuds, fall or late crop! After that just reuse it elsewhere in the garden, top your flower beds or low parts in the lawn. I guess you could compost it ? 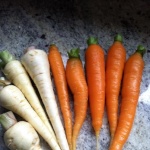 I always dig my new potatoes from my SFG beds and then replant my super small new potatoes in 5 gal buckets for a 2nd later crop. I just put the used mm mix from the buckets back in the SFG garden. By the time it gets more compost added too it and moved to other beds here and there, I never had in problems in 30 years of gardening.As long as they get the light they need they should do fine and with 5 gal buckets you can always move them.

mlayser wrote:]anyone growing potatoes in 5 gallon buckets as a complement to your SFG?

There are several of us growing potatoes in containers - I'm trying it for the first time. When I studied about growing potatoes, I read that the plants won't set tubers if they are too hot, although I don't remember reading a specific happy tater soil temp, and a teacher of a gardening class at my local community center also said container grown potatoes should be placed in the shade. So I elected to place my containers where they receive morning sun but afternoon shade. But if that's true for our area, I wonder what that means for you in Phoenix?

I know you've got some from the grocety store that have sprouted already, but I would call your local Master Gardeners extension office and find out if they can recommend a species that will produce tubers in your climate. Because the thing that's decieving about taters is that a healthy plant above ground does not equate to potatoes growing underground.

I won't know if my containers were successful until I dump them out at the end of the season. If they are then I'll want to do them again, so I'll have to think about crop rotation to keep the soil healthy - probably doing potatoes every other year in them so I can plant legumes, greens, and squashes/tomatoes in the off year. Otherwise I was going to turn them into permanent planters with blueberry bushes.

thanks fo all the great input...

I DO need to check with the local extension office for a more heat resistant species to try here during summer. They fried. I also didn't shade them enough. Starting over...

I compost ALL leaves and vegitable/fruit food scraps and peels, etc so I think I'll skip the Mels Mix (save my vermiculite and peat for the beds) and just go with 100% compost. May add some pine needles to the mix once I see them start to grow. What think ye?

I saw potato towers on Sunset.com that used a bamboo type mat wrapped around a tomato cage. She used dirt in the bottom but then covered the plant with straw the rest of the way up as it grew. It did not show how many potatoes she actually harvested at the end. I was disappointed in that, but it is an interesting idea.

Similar topics
» Can i just mix up the Mel's mix right in the garden box?
» Question about growing potatoes in buckets.
» 5 gallon buckets stuck together
» POLL: How did you find the SFG Forum?
» Need advice on caging plants in 5 gallon buckets and keeping critters out of them.