I was just wondering where others got their online names from.

For example, my full name would be Kabaju Pyta which is a from a Native American language and means red horse. I got the horse part since I'm rather big (over 6', and a little too beefy), and the red part is because I always get sunburned. I later dropped Pyta (red) since no one can pronounce it, and added 42 since that's the answer to life, the universe, and everything.

I'd like to know where some of the other online names come from, like Boffer for instance.

I'm Kim. I had a friend in school who was from Florida and there was a cartoon character she used to watch named (big breath) Kimbies Louise Bernstein Stein-a-go-go...so naturally I got tagged KLBSaGG, Jr. Eventually shortened to Kimbies Louise, then just Kimbies. Some folks know me only as Louise... odd, yes, but this was the 70's.
Don't panic, I've got my towel. 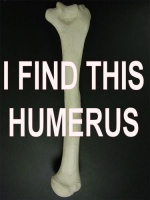 Several years ago, I got frustrated after 6 rejections of my screen name ideas while trying to register on a website. So I made up an acronym, which in polite company is this:

BaldOldFatFellER
It didn't occur to me till several weeks later that the root of the word was polite slang for makin' whoopee back when I was a teen.

I've also learned since then that 'boffer' is a real word. It means "A foam or padded mock weapon used for simulated handheld combat, such as in a stage play or in battlefield recreations."

Does that make me a tool?

Well at least you're creative. No offense to others [cough]timwardell[/cough] but isn't being creative with the name half the fun?

It is fun, but it gets awkward sometimes. I wish now I had registered with Steve, but somebody got it already and HE NEVER POSTS!

i was curious - glad to know now, steve! and thanks for great thread - this is entertaining to read.

figure i should explain my user name then. i'm usually cheerful and the frog is from 'fully rely on g-d'. . . i really don't have a thing for frogs. although they're good eating. yum. country girl. many folks seem to think i collect frogs and give them to me as collectibles. i just have them because of the friend(s) who give them, not because i actually like them. now you guys know a secret, too.

CampRN= camp nurse for boys camp in Vermont 10+ seasons. For the rest of the year RN in a Middle School. Busy, busy

Nidiyao - My daughter Cecily couldn't say her sister Lydia's name, she called her Nidiyao. So I stole that name, cuz it's never taken anywhere!. Poor Lyd, she'll have to think up her own good screen name later.

Mine is probably easy to figure out. My name is Lisa, and I am a professional photographer. I haven't been doing much lately b/c I now have a son, and so now I am a stay at home mom who occasionally does photography. But I used to do it full time. If interested, you can check out my work at www.MomentsToRememberPhotography.com

Belfrybat. One of my mother's favourite expressions when describing an odd behaviour was, "He must have bats in his belfry." It was directly towards me many times. This has been my screen name since the early days of the internet. It is rarely taken, and if it is, I either hyphenate it or put my zip code after it. I also happen to like bats and think they are much maligned creatures. The icon I use is a chubby moon bat that I started using on a weight-loss forum many years ago. I wish I could find a larger picture of it as I'd love to have one framed.

I got my name from my mother..

As for forum Names?

The Compost Pile (my personal favorite)

The Water Bucket / Barrel (a play on the water cooler concept)

I'm sure I'll think of others..

Jeff Buffington wrote:I got my name from my mother..

As for forum Names?

LOL Thanks. The names that will be on the poll have already been selected from posts since the new forum started.

Unfortunately, nothing creative here...just an abbreviation of my 23 letter hyphenated name - Sharon Weatherwax-Ripley. Many thought I would shorten it after the wedding as it is a bit on the cumbersome side. But I have used religiously (stubbornly) for 20+ years.

When I first started using the internet, my favorite song was (and still is) Tom Petty's "Wildflowers" so I decided to use that... only to find that the name was taken, so I changed the I to a Y.

I've used this name on so many forums, that I have numerous close friends who have no clue what my given name is (Carolyn) and only know me as Wyldflower ...or Wyld. I kinda like that!

The name "choksaw" is also the name of a wolf pack that is being breed in the wild but somewhat captive to be re introduced to the US since the northern timber wolf is/was near extinction its a charity that i support mainly because im a wolf Nut, coffee mugs wine glass's pitchers figurines you name it i got it somewhere i also have 3 wolf tattoo's. They just mysterious and captivating animals, gentle but fierce.

Imagine onthe expression a burglars after breaking into your home and hes greated by a rotwieler shepard or pit very intimidating. Now imagine the same situation only to be greeted by the menacing smile of a wolf, can we say loss of all bodily fluid control??? lol

Chexmix - everyone thinks it comes from the snack. However, it didn't start out that way. My mom raises exotic birds (African Greys, Umbrella Cockatoo, ect.). So I had devolped a web site/email long ago using her first and last intial and the words exotic birds = chexoticbirds.

So while on message boards or talking people would always shorten it to Chex. Well since that name/word is most always taken I add mix to it making it Chexmix.

I also describes me at well. I can be fun, nutty (really crazy), salty (salt to put into a cut) or sweet (like candy). It just all in whats going on around me at the time. With five kids and five grandchildren you sometimes get them all in the same day, hour or minute.

Life is good so go enjoy some Chexmix today.

Oahu is commonly translated/nicknamed the Gathering Place.
It's the one I'm on and wanted to distinguish that from the other 7 islands.

No I did not get my name from watching to much Scooby Doo. The last job I had gave me an email account through the company server. Their practice was to take the first 3 letters of your first name and the first 3 letters of your last name and put them together. So I became scoobe. When I got my laptop they thought they were oh so funny. My wallpaper was Shaggy and Scooby running in terror from some ghosty. But I must say it is better than some of my other nick names I've had in the past.

Mine's pretty boring... initials and photo because I'm a photographer. Now I'd wish I'd come up with something way cooler.

My screen name is kinda dull although some here have called me Wardin. It just that I am Ward and I live in Wake, thus, WardinWake.

I am a fish and wildlife management biologist. One of the tasks I do is count bullfrogs. I am female. Making me a bullfrogbabe.

WardinWake wrote:My screen name is kinda dull although some here have called me Wardin. It just that I am Ward and I live in Wake, thus, WardinWake.

For some reason I thought it was more like: Warden Wake, with a trick for the spelling.

bullfrogbabe wrote:I am a fish and wildlife management biologist. One of the tasks I do is count bullfrogs. I am female. Making me a bullfrogbabe.

I have a friend that's in Wildlife Science and is looking for a job. Any ideas where she could apply?

Just a straight forward name. I'ts the area I'm from, however most people on the Sunshine Coast have no idea where it is.

The name “Eerwah” is an indigenous word meaning "death adder"(snake).
This area was occupied by a number of indigenous tribes but predominately the area is associated with the Kabi Kabi, Nalbo, Dallambara and Undanbi tribes.

I havn't come across any 'death adders' but there is plenty of 'Tiapans', 'Eastern Browns' and 'Red Bellied Blacks.

WardinWake wrote:My screen name is kinda dull although some here have called me Wardin. It just that I am Ward and I live in Wake, thus, WardinWake.

You mean you're not the warden of Wake Prison? Whew! That's a relief.