May Avatar: Not Just Veggies! (click this)
Welcome to the Official SFG Forum
!!! Happy Gardening in 2020 !!!
Search
Latest topics
» Rogue strawberries
by plantoid Yesterday at 11:40 pm

» The SFG Journey- agriculture seminar in Organic growing.
by has55 Yesterday at 10:42 pm

» THE LIFE OF MALCOLM BECK-a Texan ahead of his time in organic farming and gardening
by has55 Yesterday at 10:19 pm

» Organic Certification course with free course to give to a friend
by has55 Yesterday at 10:06 pm

» A Louisiana hello
by sanderson Yesterday at 4:31 pm

» Panic Buying due to Cornavirus Pandemic
by sanderson Yesterday at 4:12 pm

» How's the Weather Where You're At?
by plantoid Yesterday at 3:18 pm

» Eddie Willers 1st rookie mistake, what to do?
by yolos Yesterday at 12:30 pm

Here are my moon and star vines. They are just beggining to flower! I'm so excited

Duhh - how many plants is that? They look wonderful!

Here are my moon & stars. The picture was taken on Monday.

Does anyone have blossons yet? I hope to by this weekend.

Wow, Nancy! Your watermelons looks great. I planted Sugar Babies on May 21st, so they're pretty young. They are growing, but aren't nearly as big as yours and they don't have flowers yet. I am hoping that they take off when the weather warms up again!

My sugar babies aren't nearly this big, either!

In fact, they barely have much new growth yet. I'll try to get some pictures of them next time.

2 plants. I'll have to update the pic here soon! They are going crazy, now about 5 feet out of the box. They are flowering, but I haven't found any baby melons yet. I haven't looked really hard though. I also have another in a container that I need to move over by these two.

That's a lot of foliage for two plants! I hope they produce some melons for you soon!

I found the Tomato Tuesday threads and thought to myself, 'wouldn't something like Melon Monday be fun?' - and tonight I find all of you! Both of my Sugar Baby sprouts didn't make it. = [ I suspect damping-off. So, I have started a few more seeds. I'm excited for those of you who are finding blooms - very cool - can't wait to see pics!

The other melon we're trying is Orangeglo. It got rave reviews on Baker Creek's website and was featured in an article in Mother Earth News. When I ordered the seeds I didn't realize they grew to 15-25 lbs! These will be a true test of our new trellises! These little seedlings have made it so far, although they are considerably smaller than the others in this thread. I'll post pics when I can.

I've got Sugar Baby this year and this seedling was planted May 30 so its slow to get started..... 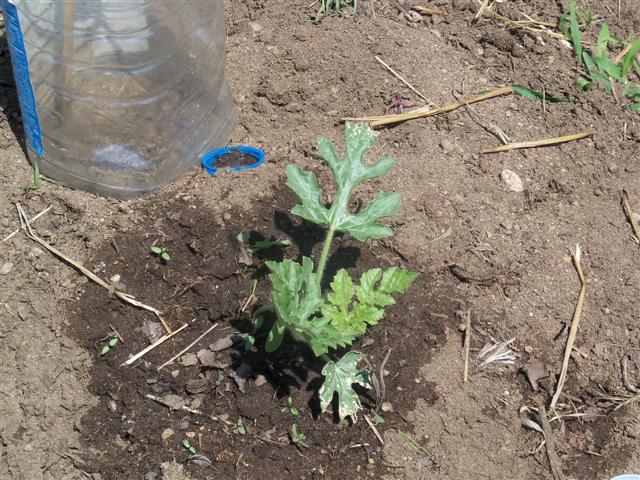 I also planted some seeds that are sprouting.

Quiltbea your Sugar Baby looks nice and healthy, so I'm sure with the right weather it'll grow just fine.

Vickster, good idea to update this on Mondays, but the sun was finally shining to day so I thought I get a picture and post now. I'll start my updates on Mondays starting next week.

Not knowing what to expect and how big the plants would get, on May 21st I planted nine Sugar Baby seeds in one box around the perimeter. Only one didn't germinate. I planted a new seed in its place last week, and it's now growing fine (lower right corner). Since I had originally planned to only have watermelons in this bed, I didn't put a grid in, because I thought they would just spread all over the place. On the off chance that the watermelons didn't take though, I ended up planting four sweet bell peppers and a small tomato plant (Totem) in the middle, so it's not the most attractive box. the Sugar Babies are around the edges. 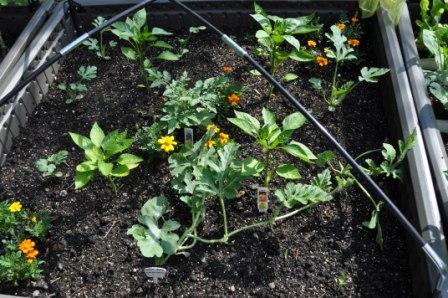 The Sugar Babies all seem to be growing at different rates, which is fine since I don't want to have all of them to mature at the same time, but here is the "Big Daddy" of the Sugar Babies: 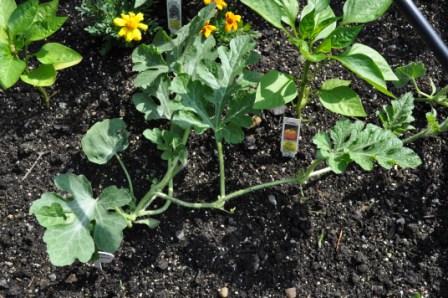 OK, for us "Monday Melonheads" following this thread, here is my update:

Sugar Babies are coming along great. Although I planted eight of the nine from seeds on the same day, they are in varying degrees of size which is great since we don't want them to mature all at once.

The so-called "Big Daddy" plant of them all (front and center below) has doubled in size in the past week, producing the start of about a half dozen blossoms in various stages, and one wee little baby melon - Yea! 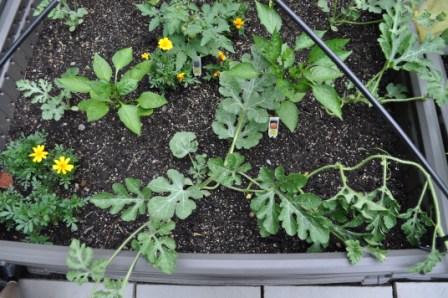 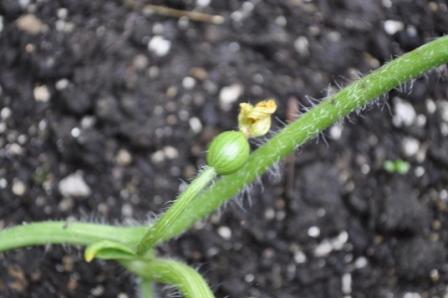 All of my ice-box size are coming slowly. They aren't very big at all yet. However, my moon & stars are taking over the universe! Somewhere in this mess are a few tiny babies. They aren't even marble-sized yet. MC - they look to be the size of yours. 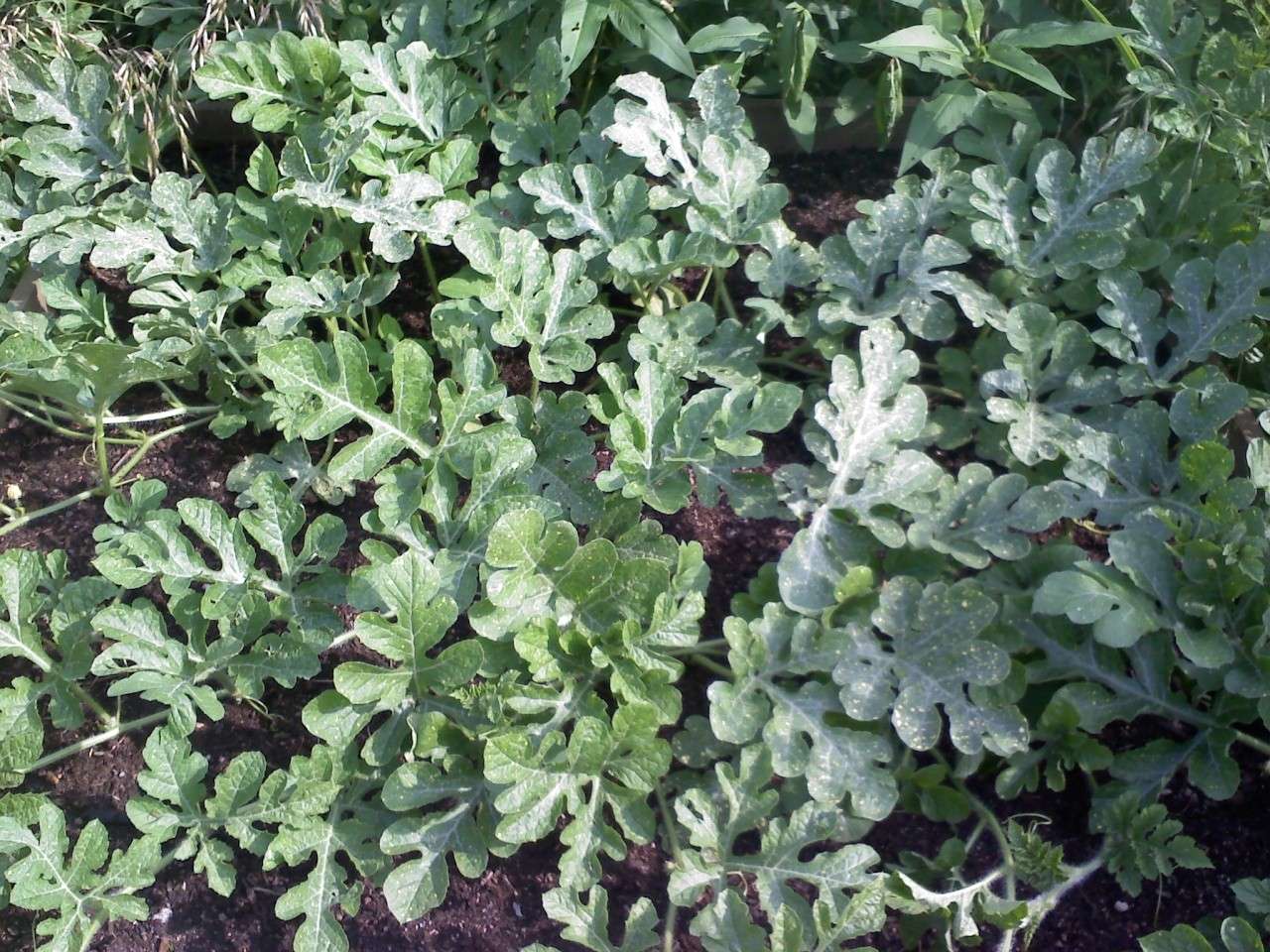 They make me giggle! 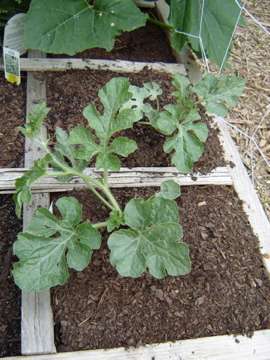 Orange Perfection Cantaloupe - lost one already (damping off?), so hoping this one fares better. 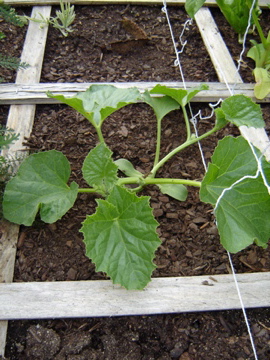 Sierra Gold Cantaloupe - one of these was a 'surprise' - it sprouted about 2 weeks after the first (I had pretty much given up on it - goes to show what I know). 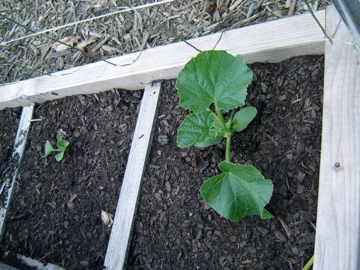 I forgot to get a pic of my new Sugar Baby sprouts, but they are still pretty small and not all that exciting yet.

I'm quite jealous of those of you who have blossoms and even tiny baby watermelons!

This thread is fun - I actually found myself looking forward to Monday!

I know it's tuesday, but I ran out of time yesterday! here are my moon and stars plants as of yesterday. I haven't found any babies on them yet. My sugar baby across the yard has some on it though.

I also have tiger melons, white watermelons and banana melons, but none are very big yet

Duhh - Tuesday is fine - I don't think there is a 'thread police'. *ha* Your melons look great, so happy and full! You've GOT to post pics of the tiger and banana melons - I can't wait to see those. Where did you get them? 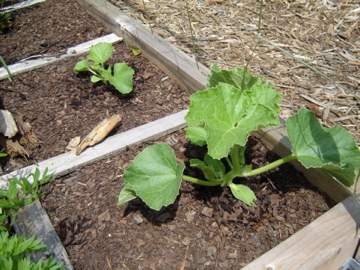 Sugar Baby watermelon. This is my second try . . . hope the growing season is long enough to get some this year. 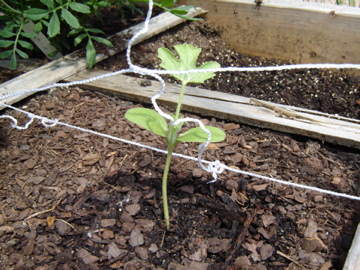 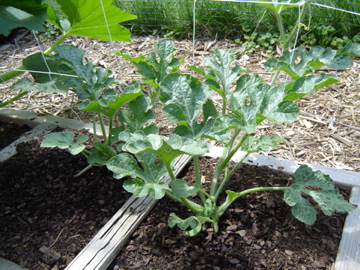 I'm seeing the same pattern with my melons and winter squash that I also saw with my summer squash and cukes. Tons of male blossoms, but no girls have joined the party yet. *sigh* Guess I don't have much choice but to be patient . . .

I ordered the seeds from baker creek. I have plants, but no melons yet. Here are a pic of the plants!

Tiger melon plant. I don't even think these 2 are flowering yet.

Banana melon plants. They are flowering. I haven't looked to see if there are any little ones on it yet.

My sugar baby surprised me. I swear this thing got this size while we were gone over the weekend! 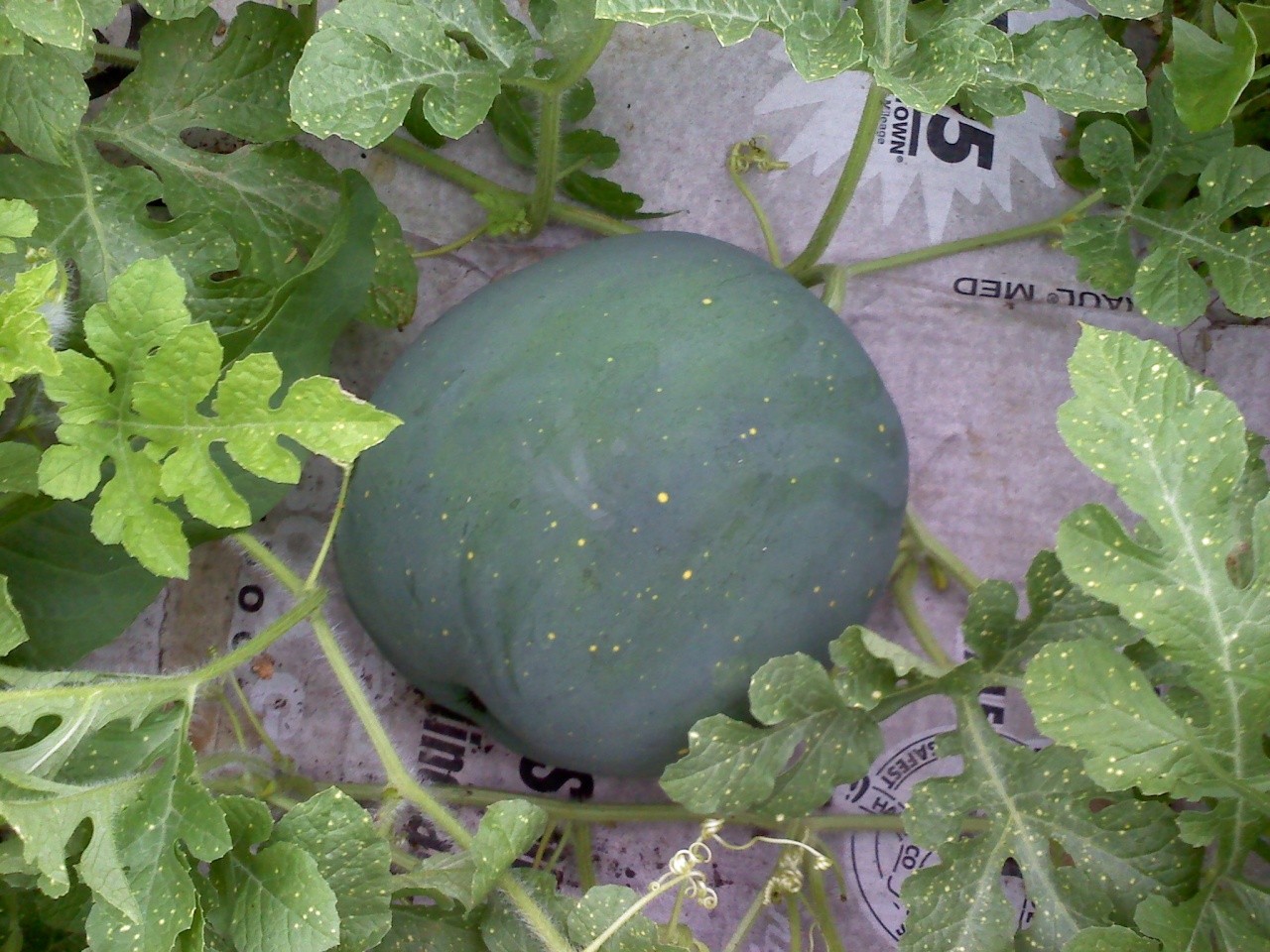 I hope it is hiding well enough from anyone else who may want it. =) There were 2 or 3 others that we could see, but they were still very tiny. The vines have really taken over!

Congrats to those of you with actual melons!

Nancy, do you have your melons on paper of some sort? I don't have anything so large yet, but my vines are running out of the 18" high boxes that they are in, and I'm wondering if I need some kind of protection for them as they are laying out over the plastic pavers (which don't actually seem to get very hot, even in the heat we've had).

Vickster - Are those your melons from last year in your avatar? If so, are they on a trellis of some sort? I'm thinking I may need to corral my vines a bit.

MG - I line the paths at the garden with cardboard and newspaper. The Moon & Stars has grown so big that this melon is growing outside of the box. The vines are a good 8 feet so far! I might try pruning vines with no melons, but I'm not sure about doing that.

WooHoo! While watering the garden this morning and moving the watermelon vines around so that I could maneuver, I discovered "gifts" left by the watermelon fairies hiding under the leaves!! The one on the bottom is about 6" in diameter and was hidden by a tangled mass of leaves from the plant we've been calling "Big Daddy", because it was SO much larger than the other seedlings even though it was planted at the same time.

There are lots of blossoms on the vines, so we are hoping for many more watermelons in addition to these four. 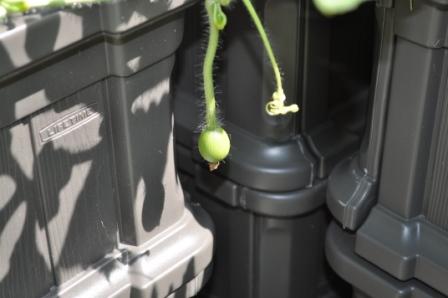 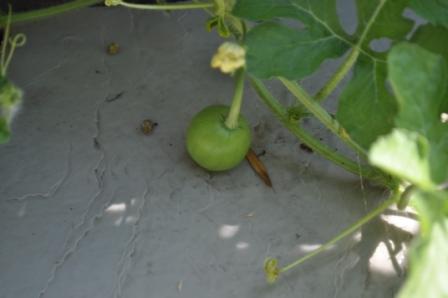 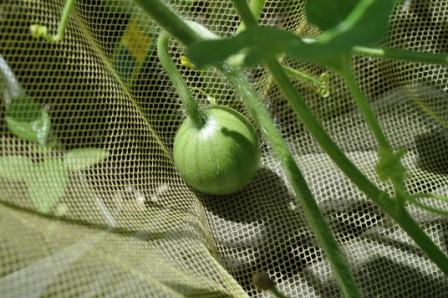 Congrats Masongarden!! I discovered that one of my sugar baby vines with a ping pong size watermelon on it had died. I brought it inside & cut it up into 4 pieces and shared with my husband and 2 kids. What was one mighty sweet nibble of a watermelon. My 2 year old wanted more so I had to go and buy a seedless watermelon last night.

MasonGarden - yep, that was my single Sugar Baby from last year. I had it trained up a trellis, and I'm doing the same thing again this year. Saves lots of space!

Well, I've been absent for a while, and it's not Monday, but I had a few minutes so here are my pics from last weekend.

Orangeglo watermelon - this guy is about double this size now! 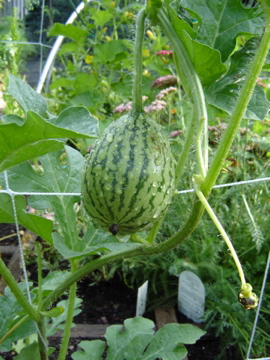 Here is an Orange Perfection cantaloupe - it's about three times as big now! 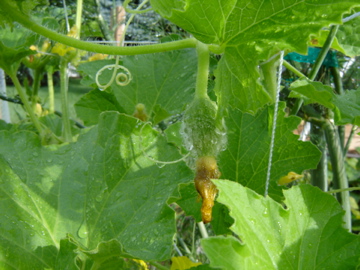 How is everyone else coming along?

I got an email with pics from my son. He has harvested 2 cantaloupes and 1 sugar baby watermelon. The watermelon was sweet and about the size of a bowling ball. The first cantaloupe was a little hard so he waited a week for the second. Said it is the sweetest cantaloupe he has ever had and was almost as big as the sugar baby. Still has several watermelons and about 6 cantaloupe on the vines AND the vines are blooming again. I told him to pick what was ripe and the plants might put out another crop before frost in Nov.

Glad to see those watermelons and cantaloupes coming along!

I had about six maturing, but had to leave town for six days and came back today to find that my most mature Sugar Baby had turned into a foul mess!

It was covered in a whitish fuzzy coating and had begun to turn yellow. Temps were in the high 90's while I was gone, so I'm sure that didn't help (plus maybe some over watering before I left). I had also trellised my vines a couple of weeks ago, but this one was large and I kept it on the ground, so maybe that didn't help either.

Oh well, the good news is that I have about five others growing well and adapting to the trellises, and tons of new blossoms. Hopefully we'll be able to enjoy some fresh melon soon!

Do melons continue to grow like zucchini & cucumbers? I planted several sprite melons and I harvested about 6 melons the other night. The plants are healthy. Are they done? Should I pull them? Our freeze date is not until Nov 15 so there is plenty of time.