December in the Mid-South garden

December in the Mid-South garden

Mid-South gardeners, are you still working in your gardens or are they put to bed for the winter? Have you planted anything indoors? Have you received any great seed catalogs to recommend?

1. Finish raking leaves for the compost pile
2. Mulch newly-planted garlic and onions beds to prevent too much foliage growing during warm spells (mulch flower bulbs, too)
3. Clean up and winterize SFG boxes
4. Lay in materials and start making new boxes (thanks, Ward)
5. Hire someone with a tractor to plow up larger garden plot for next spring, drain oil and winterize tiller - take to dealer if needed for repairs before the spring rush, sharpen hoes, remove rocks from garden soil, put down fertilizer, clean hoes and coat with light film of oil to prevent rusting, ... oh, wait. SFG'ers don't have to do any of that! Instead, hang up your trowel, kick back with some eggnog, and relax after a job well-done.

Quote 5. Hire someone with a tractor to plow up larger garden plot for next spring, drain oil and winterize tiller - take to dealer if needed for repairs before the spring rush, sharpen hoes, remove rocks from garden soil, put down fertilizer, clean hoes and coat with light film of oil to prevent rusting, ... oh, wait. SFG'ers don't have to do any of that! Instead, hang up your trowel, kick back with some eggnog, and relax after a job well-done. End Quote.

You southern gardeners are lucky you still have garden things to do and had crops a lot later than we in the north.
Here's my garden beds this morning after over an inch of new, wet snow. 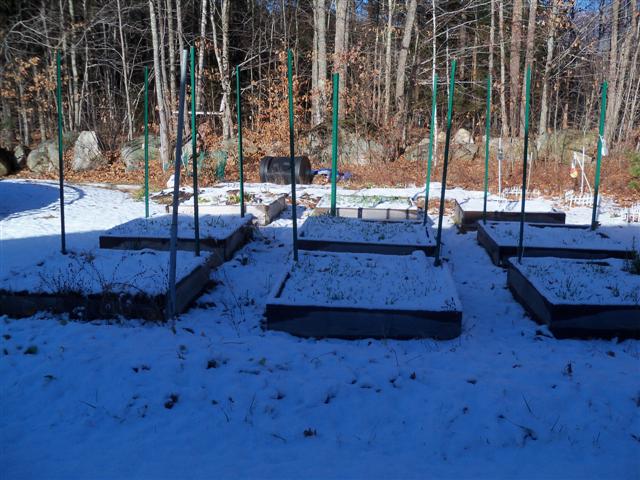 My tools are safely stored away and I am into my quilting projects once again to wile away the long, cold witner.

I received my wonderful Johnny Seed catalog yesterday and that kept me dreaming for a couple of hours. Now I plan for next spring. 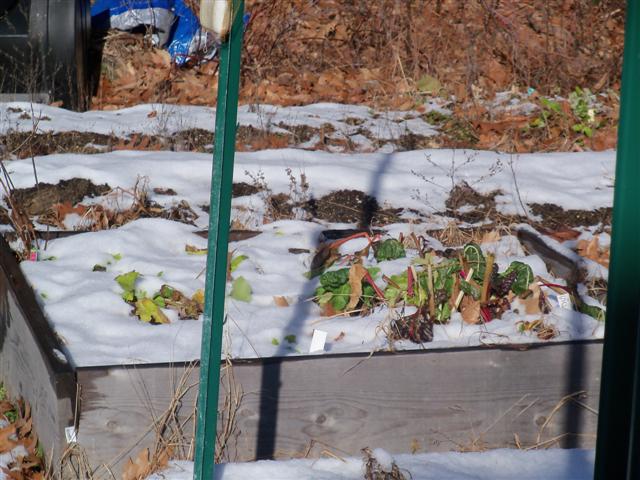 The only crop still going are the parsnips on the left in this box. The Swiss chard on the right is now history. Parsnips, lucklily, can be harvested through the winter months as long as the soil isn't frozen solid.

Enjoy your last days of gardening my southern friends, and enjoy every minute of it. I envy you.

Its been relatively easy thus far to protect my boxes but some very cold air for this area / time of year is coming into upstate SC next week. Looking at low 20's all next week but 18 degrees for a low on Tues morning. Tomorrow I am going to add another layer to my hoop wagons and try to insulate things better. If I can survive this (made it through mid 20's...JUST), then i'm almost positive I could quite comfortably four season garden here where I live. This is about as cold as it gets; for here anyhow.

5. Hire someone with a tractor to plow up larger garden plot for next spring, drain oil and winterize tiller - take to dealer if needed for repairs before the spring rush, sharpen hoes, remove rocks from garden soil, put down fertilizer, clean hoes and coat with light film of oil to prevent rusting, ... oh, wait. SFG'ers don't have to do any of that! Instead, hang up your trowel, kick back with some eggnog, and relax after a job well-done.

Ander...this was priceless. Thanks for the belly laugh

We've had temps in the upper 20's & I have NOT covered my beds with anything. I was surprised how great the lettuce is doing, different kinds of romaine, ready to start cutting now. The carrots, cabbages, turnips, parsnips, cauliflower are doing great. They look kind of wilted in the morning, but perk up as the day goes on. Cabbages are heading, probably could pick one this week. The cauliflower is just starting to head. The rutabaga roots are very good size, but the leaves are sort of pitiful. They had started getting powdery mildew & I had sprayed them, so don't know if the problem is the wilt progressing or the below freezing temps. I'm not happy with all my brussels sprouts - they are full of sprouts, but they are all open, not a tight little ball like I had hoped for.

Parsnips aren't quite large enough to pull, but the turnips (roots), carrots & rutabagas are really sweet tasting. I guess the only thing that could have made me happier was to somehow have a ripe tomato. I miss those the most.

I have enjoyed my garden immensely this year & glad Mel redid the book & changed the mix formula.

We've had temps in the upper 20's & I have NOT covered my beds with anything.

I think i'm babying my crop if truth be told. It's my first SFG (and while not new to gardening), I think more than anything I wanted an excuse to build those hoops! This is the week that the covers will actually be needed even though i've been at it now for a couple of weeks. The wind chill is in the low 20's right now and one wagon just read 42. That second layer made a big difference ! I think my crop will be fine and once this passes, I will take a leaf out of Dixie's book and let them get 'nipped' at a little. After all, things sweeten up that way.

We just harvested the last of the peppers and tomatoes from the greenhouse, but we still have greens, spinach, carrots, garlic, leeks, and beets outside covered and doing fine.

Just went outside and crawled under my plastic covers to harvest some greens. 19 Degrees outside but 40 under the wagons. Helped myself to an extra large helping of the following : Chard, Spinach, Romaine, Beet Greens, Kale, Red Lettuce, Black Seeded Simpson and Cilantro. 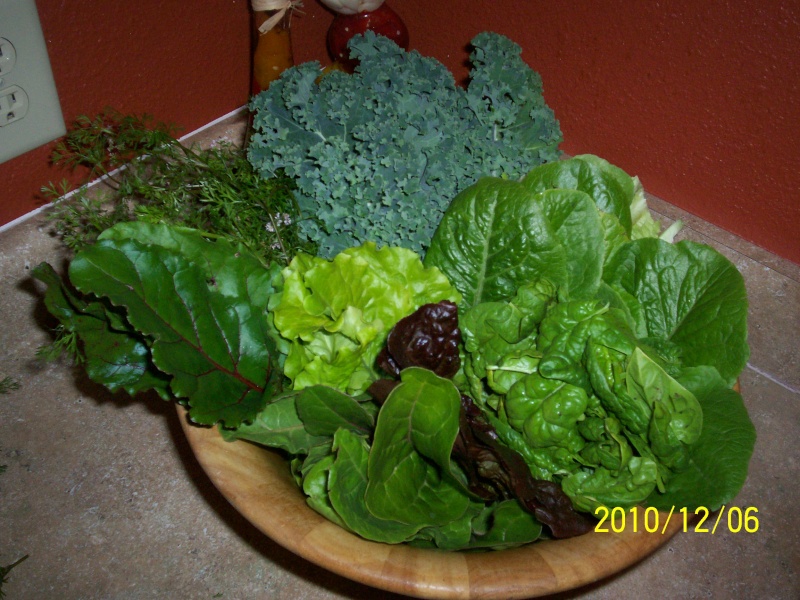 A little easier to see the different types in this one. 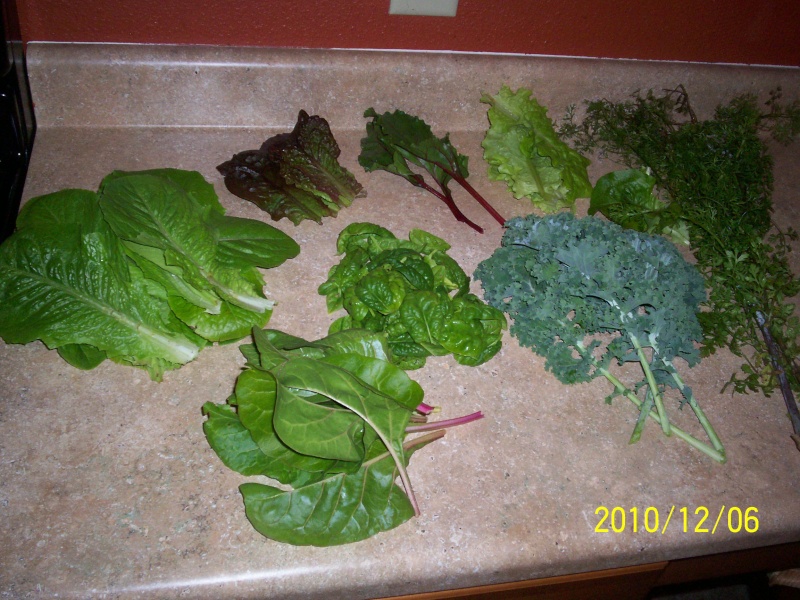 That looks sooo good. It makes me want to try harder next year to extend my season. But with our crazy climate, I've had single digit temps already even though I'm in zone 7. Winter's not quite here, and I'm getting tired of bean soups!

Day before yesterday I had a small mess of kohlrabi leaves and beet tops for lunch that had been in my 'fridge since Thanksgiving, but I hadn't been out to the garden since the deep freeze hit a few days ago. Yesterday I was craving a fresh salad so I ventured out to see if there was anything I could salvage for lunch. Even though the large leaves were all browned and wilted on most crops, underneath the smaller leaves were doing just fine.

I picked enough arugula, Red Russian kale, mustard, fennel fronds, parsley, scallions, and celery root leaves (I found a small celeriac hiding under a broccoli leaf) to make a large salad for both of us. I also pulled a German Giant/Parat radish the size of a softball which I knew would be too hot or hard to eat, but I had to give it try. The top part of it was frozen, and I had to pry it out of frozen mix, but I cut that part off and what remained was one of the best radishes I've ever eaten - so crisp, and very mild. I peeled the outer red skin off which seemed to be sloughing off. That left a normal-looking, huge red-skinned radish to slice into the salad. I added plenty of tomatoes from the green ones I pulled on November fourth that have been ripening in our garage. The salad tasted so good. There are still turnips to be harvested in the garden, too, as well as collard greens, but I left those for another day.

I read excerpts of Eliot Coleman's new book online about winter gardening, and he makes the case that while certain crops will grow fine in winter, the smaller leaves take cold better than large ones. My garden is living proof of that. Our temps went down to 19 degrees and the crops had no protection at all except for the larger leaves which could have helped protect the small leaves, I suppose.

Next year I intend to plant some hardy lettuces, spinach, and greens at the end of the season to cut as baby greens during cold weather. Cold-hardy crops don't grow well in the cold, but they remain edible while they hibernate.

oh, *wiping drool away* gosh, i am wishing i was your next door neighbor right now!

interesting you note about the smaller leaves doing better than the large ones. would be intriguing to me to find out if it's because of the covering of large leaves or if it's just that the smaller leavesa re more hardy as eliot coleman seems to infer in his books.

next to mel's book(s), i gotta 'fess up that eliot coleman's books are favs here.

combining the two methods - sfg and cold crop growing with shadowboxes/hoops/whatever you call the protective covering on crops over winter seems like a match made in heaven.

i miss fresh salad - and i refuse to pay those ridiculous prices in the store for the wilty stuff.

boffer wrote:That looks sooo good. It makes me want to try harder next year to extend my season. But with our crazy climate, I've had single digit temps already even though I'm in zone 7. Winter's not quite here, and I'm getting tired of bean soups!

But what about a small green house or something? Ive been reading about others success:) I cant remember them all but I know Jaybird has his up now and is lookin for a March harvest. Then the ones made out of windows? Im just asking, because I have big plans, its time thats all I need.

I want to extend my season as well and I know I can here, just sending positive wishes to you for yours being extended!!!

It certainly tasted good too Boffer ! I'm wanting to build a hoop house for next season as taking covers off and on each night has been a pain at times. Manual / automatic vents would take care of keeping the temps reasonable for the daytime but come summer, would I want the plastic replaced with shade cloth? (also a bonus for insect relief). I'm wondering how to do this without wasting the plastic for just the early spring as i'll need to re-attach for late fall. I'll have to attach it semi-permanently to keep it in place for windstorms.