I harvested 2 of my Honey Boat delicatas today. They grew quite a bit larger than the regular delicatas I have grown before. I wasn't quite sure when to harvest them since they were on the wire trellis, but when I touched them they fell right off, so I guess they were ready. I cut one in half, scooped out the seeds (small seed cavity) & cut in half again for 4 pieces that were fairly even in size & zapped them a few minutes in the microwave, then sprinkled cinnamon, brown sugar & butter - YUMMY. 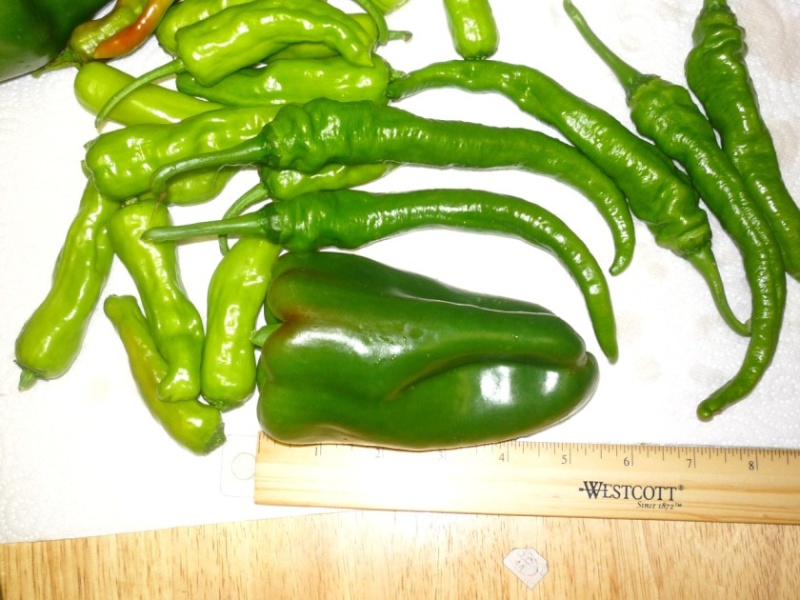 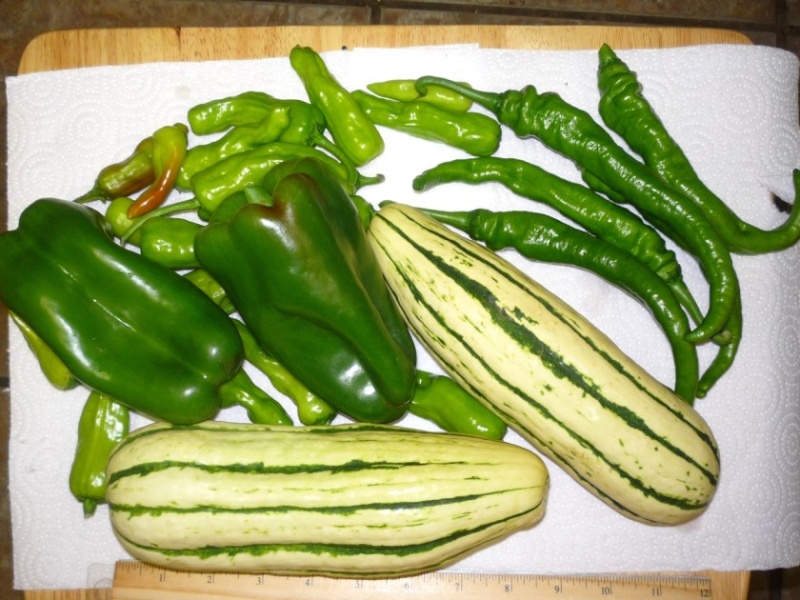 I've finally started getting more peppers that I started from seed - Hungarian hot yellow, although I didn't wait for them to get yellow. They are very hot, but not as bad as the cascabella. I also picked 2 Emerald Giant bell peppers. I'll grow them again, even though they have an irregular shape & you can't stuff them. They are very thick-walled & sweet. DH found some regular Cal Wonder pepper plants at the feed store a few weeks ago. They were in big peat pots & not root bound & have done really well. They are just starting to bloom, so hopefully I will have enough for pepper relish & to freeze.

Tomatoes are about gone - the blight has gotten to them. I pulled out several of them today. There are still lots of blooms on them, but since it has been in high 90's-100, I don't know if they will set fruit or not, I doubt it. I sure will miss them.

I'm still getting cukes, thanks to the wire trellises. I can find them & keep them picked so the vines continue to produce. I have planted 3 more trellises throughout the season & just pulled the vines on the first ones I planted in the Spring.

I lost the last section of corn I planted. It was just beginning to tassle & the wind blew part of it over. Before we got around to getting it back up & putting wire around it, my son's hybrid wolf decided it would be a nice bed, so he trampled it & dug him a nice cool spot. He won't stay in the fenced yard, so I don't know what we'll do next year. He's pretty old & lost a hind leg to some pit bulls roaming the neighborhood, so he gets babied quite a bit & I would hate for him to be tied up.

I hope everyone is still excited about their garden. This will be my first year to do any fall planting. I started brussel sprouts, 2 kinds of cauliflower, Perfection Savoy drumhead and late flat Dutch cabbage today.

In case I have never mentioned it, I LOVE SFG!

I never heard of Honeyboats before.
I particularly like their small size, something new everyday here.