May Avatar: Not Just Veggies! (click this)
Welcome to the Official SFG Forum
!!! Happy Gardening in 2020 !!!
Search
Latest topics
» Tom Thumb
by OhioGardener Today at 3:57 pm

Oh wow!  Those are tame!  At my old place in the country, I would see them all the time, but they were not into being anywhere near you!

Yeah, those turkeys grew up around here...they're everywhere! They aren't afraid of us, or sauntering across busy streets.

I potted up and brought in my basil and parsley yesterday.  Seems kinda early, but it was 35 when I get up this AM.

The basil would have been nipped fersure.

The duct cleaning service is currently at my house.  It's so noisy so I was glad we were able to go outside in the sun for a while.  I picked the last butternut squash and a few leafy greens for dinner tonight.  When we get down to the hi 20's I'll cover the greens if there's enough left to make it worth while.

Our yard is full of turkey droppings; is it okay to add them to the compost pile? (The droppings....not the turkeys....) 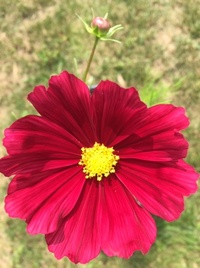 @Ginger Blue wrote:Our yard is full of turkey droppings; is it okay to add them to the compost pile? (The droppings....not the turkeys....)

I would if I had it.  I use goose poo from the pond shore across the road even though others have stated they wouldn't use wild bird droppings due to the possibility of disease.  I also collect rabbit poo from the top of the snow in winter.  Personally I feel safer using wild animal manure as opposed to domestic manure, which can be full of chemicals and who knows what. But that's just me.  I may die from this practice tomorrow.

We're heading into a warm up and I think it started today.  Shorts, T-shirt and bare footin' in the garden!  Yea!

Took all my trellis's down except the cherry tomatoes one since they are still going.  I didn't think there was much left in the garden til I went out just now and harvested for a veggie pizza I was throwing together for dins - tomatoes, garlic chives, celery, parsley, chard, basil, pepper, oregano and scallions. Also used previously harvested garlic and mushrooms.  Mm mm m!

Picked these for later: 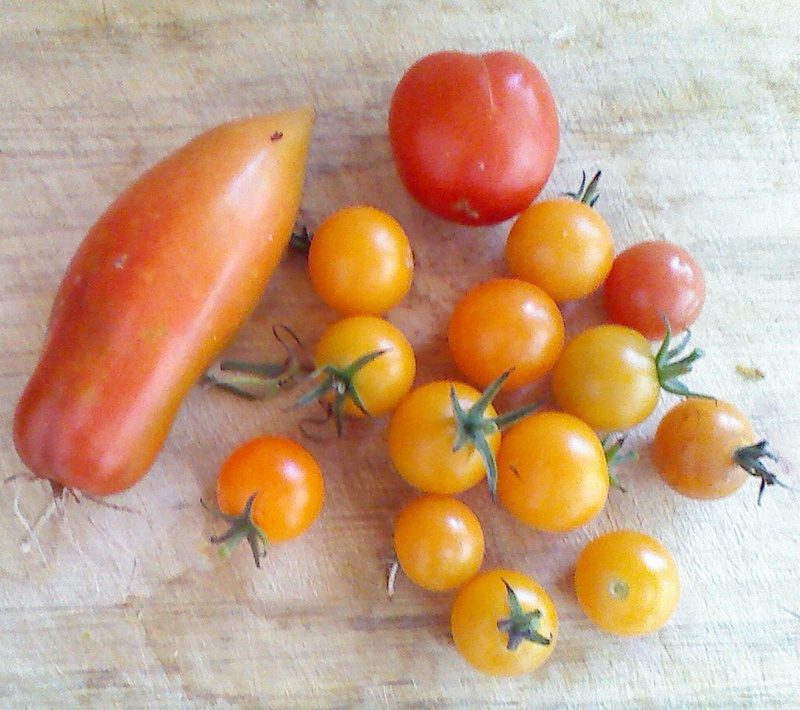 Also, the Montauk daisies are in full bloom now and the Sheffield mums just opened today! 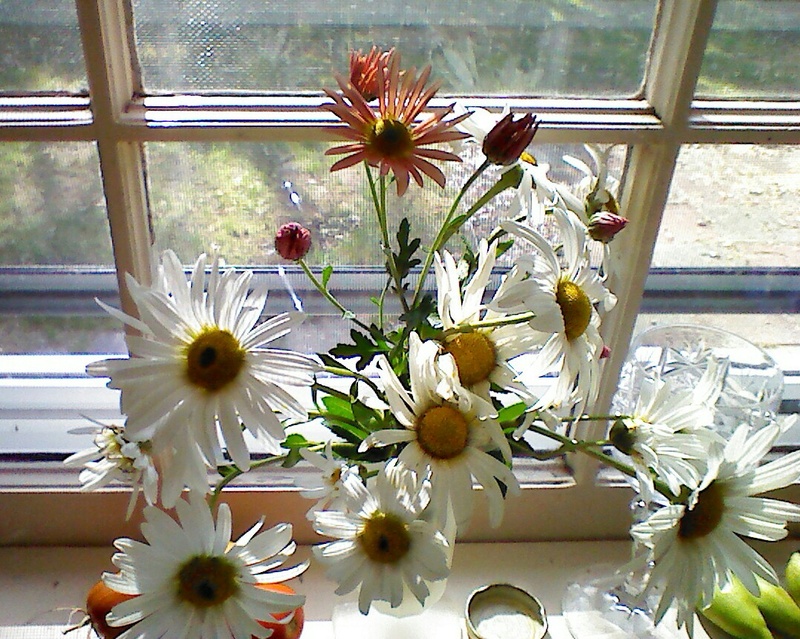 Between the gaura, the mums and the flowering broccoli, the bees are in their glory!

Yummo!  Sounds great!  And flowers!  My nasturtiums and marigolds and geraniums are still going strong, but nothing else bloom wise....maybe a random lantana....

Plants are doing good, peppers, and a few remaining maters.

Will get a look at my radishes and leaves...this weekend.  Last weekend no bulb action at all on the radishes. 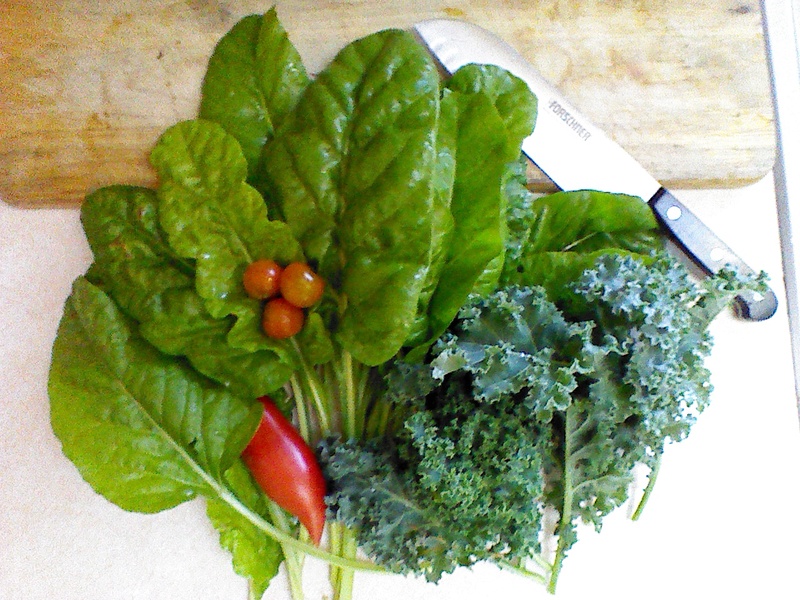 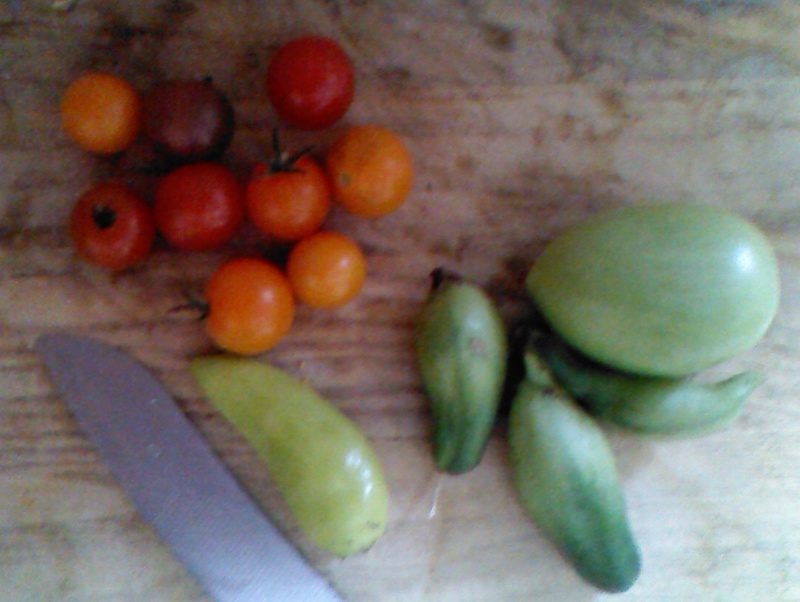 I'm hoping that banana pepper and those green maters will ripen but even if they don't I'm amazed to be harvesting them still since I don't think we've been out of the 40's until today.

And nothing is covered.

Any one else getting surprises?  Or covering to extend the season?

I need to check my kale and chard. We have been below freezing a few times so I'm not sure how they are doing.

Hey all, are you getting much snow out of this one? So far we have 3"sticking to the ground. It is wet and heavy.This caught me by surprise. I have beets left in the garden, looks like they won't over heat, I hope.

We had our first frost 2 days ago, late for us.

Supposed to rain tonight so I mowed up 12 mower bags of leaves then composted and planted 6 squares of garlic today. 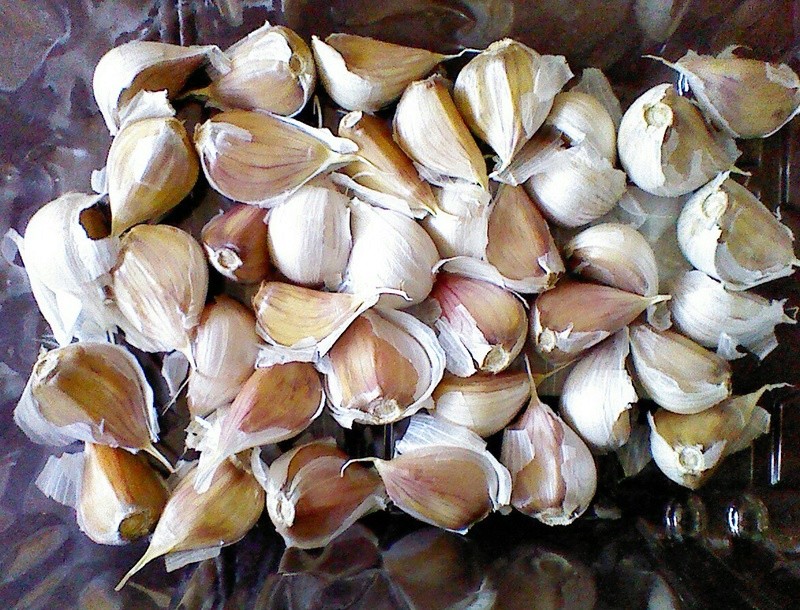 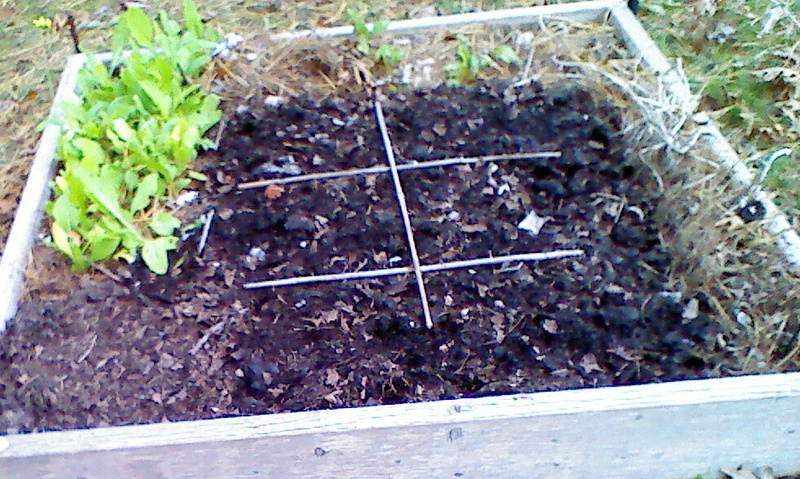 Only 36 cloves this year...so far. I may stick in a few others as the squares at the top and to the left open up.

Some of the zinneas are still going and the Sheffields are in full bloom. The bees are in their Glory! 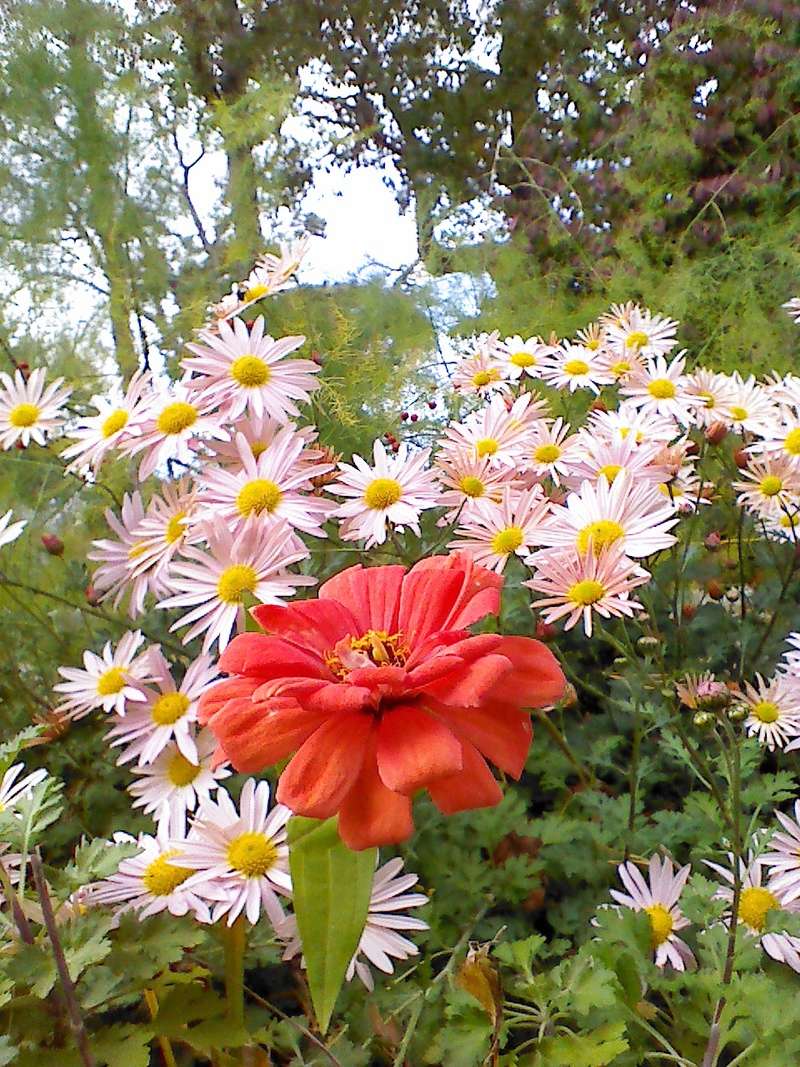 Gorgeous!  How do you space your garlic, CC?

I put 5/sq and then added 1 between each intersection...under the grids. I don't think I've planted this closely before, preferring to alternate 5/ sq with 4 in a diamond, but others experiments with 9 per sq seem to have worked out so I'm getting more daring in my middle age.