This was my 4th season using a tumbler. I consider it sort of a winter toy.
I'll start filling when things in my yard are done, that's around December.
This past season was my finest somewhat finished compost and that was because it was the fullest of all the years.
Here are my findings, right or wrong, I'll probably stay with them.

A full tumbler will complete in time, much longer than my piles, however, will finally finish, I always transfer mine to main piles in spring.
Should tumble frequently so items don't get bogged up together. If a clump has banded together, and not frozen, prod with a tool and tumble, material must be loose and airy.

Above all else, keep from getting soaked.( not enough ventilation to dry ) if wet, add browns till moisture is absorbed..Getting soggy can occur over time using kitchen scraps. I keep straw, newspaper and various cardboard material around just for this.

Keeping the tumbler out of the weather is a great help, no extra moisture will run in.enough moisture is usually provided in the greens added.

Tumble slowly and feel material churning inside. I know of folk trying to spin it like those spinning on the price is right tv game show.

As I mentioned before, to me a tumbler's a toy, some consider it a tool, which it really is. It will warm up, not nearly as a pile does.  It will freeze solid in winter, I just keep adding then.. 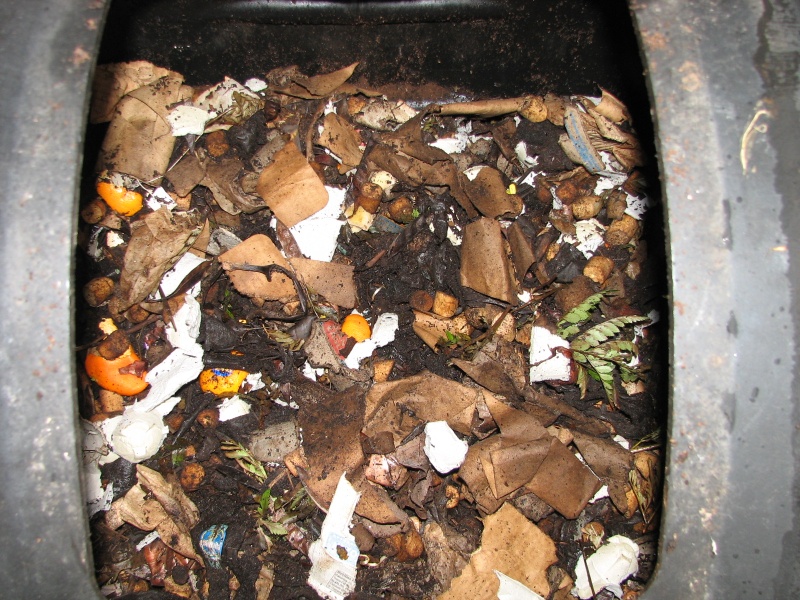 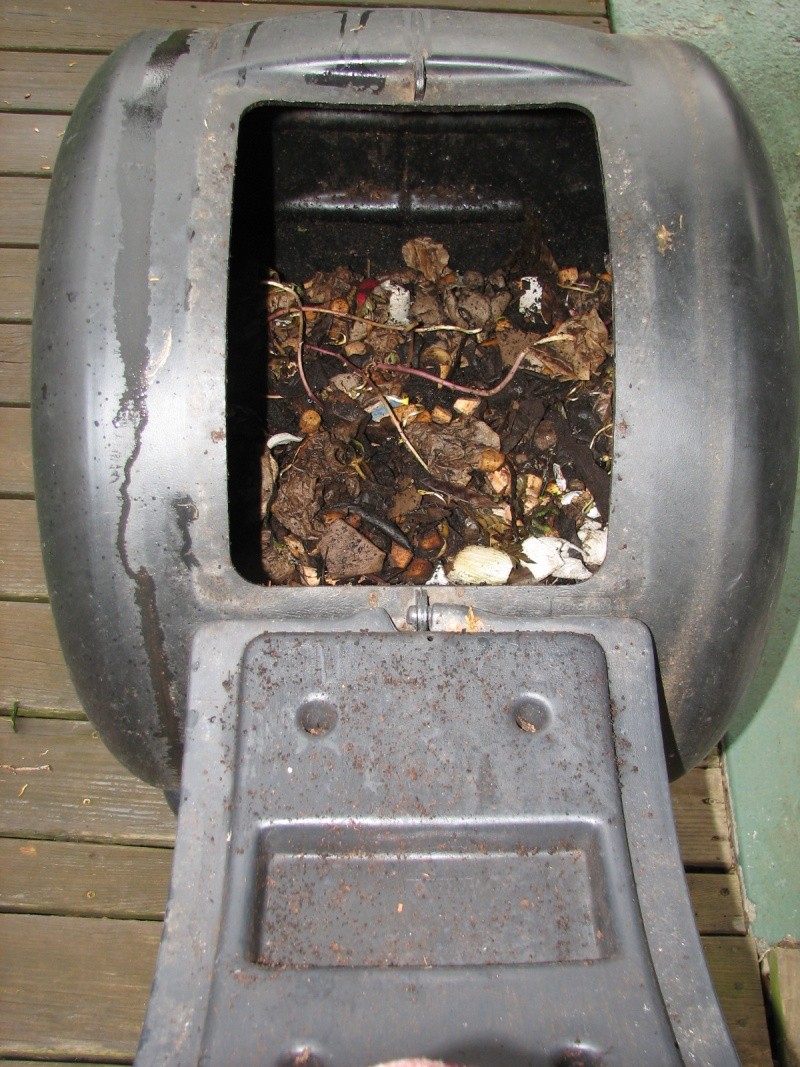 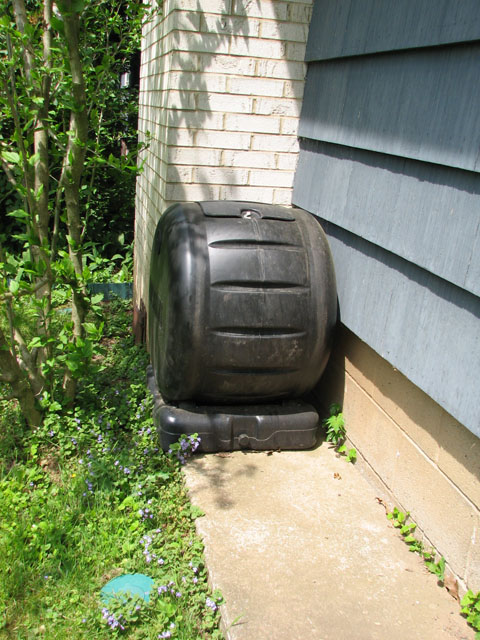 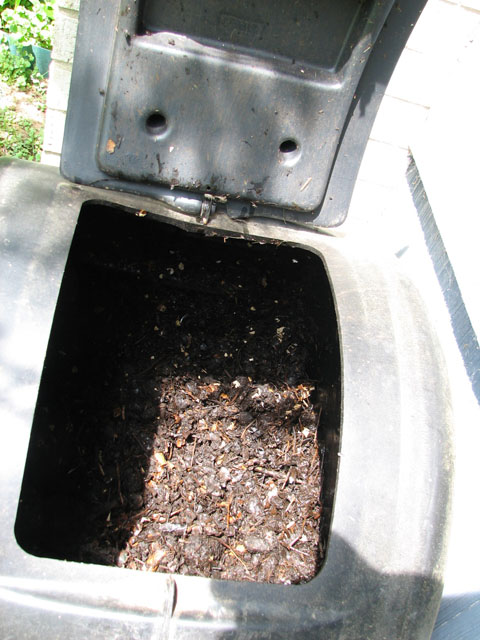 @sanderson wrote:Thanks for the topic, Jimmy.

Can you help me?

We bought an Envirocycle tumbler this year. It is the 17 gallon size. 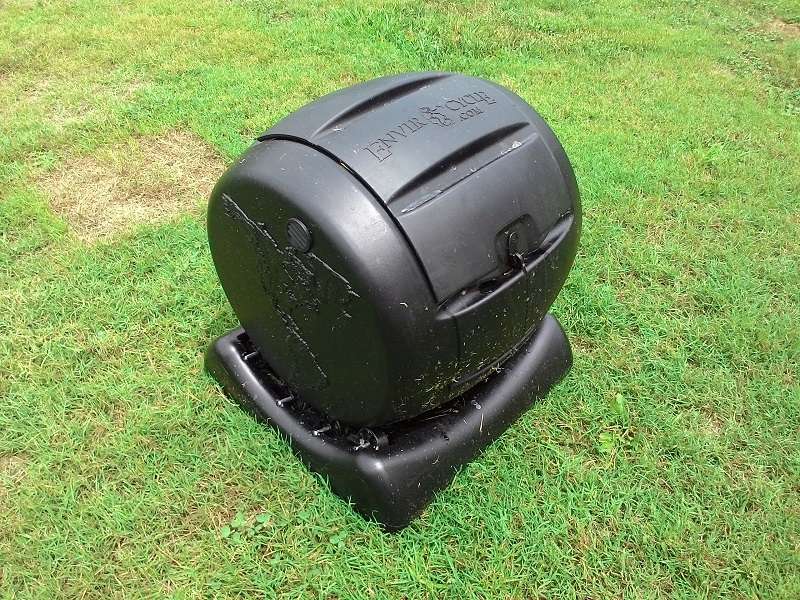 We filled it just the way the instructions said. 75% greens (kitchen scraps) and 25% browns (shredded cardboard).

It takes us 1 week to load the thing to the top and now it has been one week composting and the contents are not hot, only 80 degrees. We are turning it twice a week. 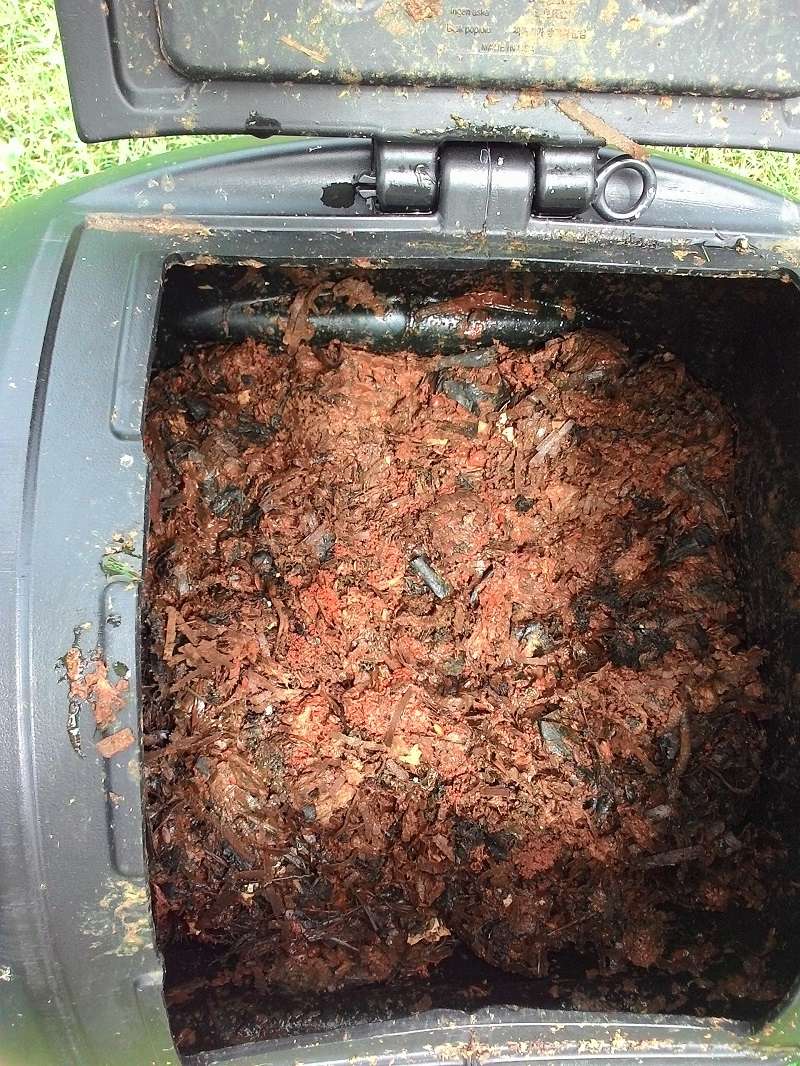 Our kitchen scraps are what is left over after juicing our vegetables. I know there are a lot of enzymes in the juice, but not much left in the pulp by the time we are finished with it. I don't know if that matters in making compost, but...

Put some gloves on, get a handful of the compost and squeeze it.  If you get more than a drop of liquid after you squeeze, then it is too wet.

@yolos wrote:Put some gloves on, get a handful of the compost and squeeze it.  If you get more than a drop of liquid after you squeeze, then it is too wet.

Okay so I did that and got about 20 or so drops. Way too wet. I added another 2 1/2 gallons of shredded cardboard and gave it a good spin. I suppose I should keep checking for wetness each time I turn it and continue adding cardboard until it is just 1 drop.

Here is a write up of how to tell if the moisture is correct in a compost pile.

Hi Leone
Don't get to excited about heating up a tumbler, not going to happen.
It can get warm, however, I've never been able to reach temp's I get in my compost piles.
There's just not enough mass to do it. That heat comes from many zillions of microbes rubbing against each other.
Tumblers just not able to hold that many. Tumblers are much slower than piles, however they do work if not forgot about.
Mine was just a learning tool on the road of compost knowledge.

@sanderson wrote:And rotate slowly so the material can tumble and mix.

Okay, thanks so much for the information. I really appreciate it.

Just bought a used toy off Craig's List for $60, a Lifetime 80 gallon composter. It looks like the one that JohnKat83 has. There is an interior bar to help break up and aerate the material.  The second photo is where it will be set.  It will replace the wire cage.  This is a heavily wood chipped area between the Big compost bin and crepe myrtle tree on the left and the Dwarf orange tree on the right.  A nice shady place. 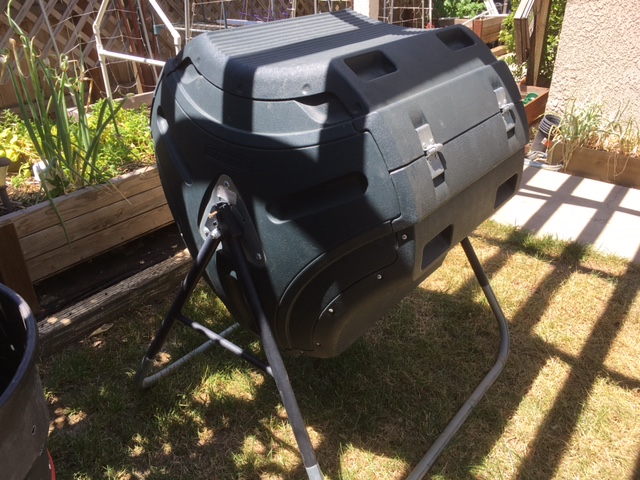 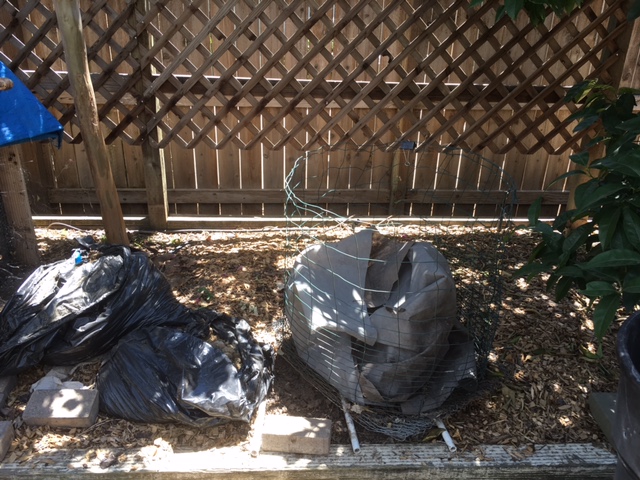 you will enjoy it, a very interesting tool. now consider a microscope to see what is happening. There are a few serious composters on Facebook. They provide some interesting info.

@jimmy cee wrote:you will enjoy it, a very interesting tool. now consider a microscope to see what is happening. There are a few serious composters on Facebook. They provide some interesting info.

Glad to see ya!  Missed you

I've only had my 27 cu.ft. bin since last Fall. Turning the material is great exercise but I am zapped after turning it. I'm a few months older than sanderson

.  I have room to add another bin which would mean I would not have to move the material twice each time I turn it. Now I'm waiting to see the results of sanderson's rotator bin which may inspire me to go that route.

I Like the tumblers idea  , having a bust up back  etc made it very difficult  for me to turn my original 310 litre blue food barrel tumbler  once a day . ..if I left ti much longer it settled too much & became a heavy slab of matter in the bottom of the drum . If that occurred I had to use a tiny long handled fork to remove it & put it back in .

Like has been said  it's pointless leaving the perforated drum device outside open to the elements for it is a rain magnet , the contents suck up any rain from around the vent holes or doors & then it becomes  too wet to work .
I tied  a  waterproof sheet over the whole device & secured it with four rubber bungees taking it off when I turned the barrel . .. keeping it dryish helped no end  .


Over this last couple of years I've been collecting bits & bobs  to motorize a decent sized composter drum version
I'm not quite there just yet , it looks like it's going to be a race between me making one & me being composted instead

I've got a heavy duty stepper motor & speed control from one of these jelly on a plate fat wobbling /reducing machines . The lowest speed suitably geared down via a few track racing cycle gears  should see me obtain one RPM  every 10 to 15 seconds .

Meanwhile I've had to let the five in use composting  bins do all the composting by themselves , I've only managed to turn each one over into a new bin once in 13 months , as physically things are slowing down for me big time .


I've just has a silly thought or is it  .  It's to do with hydraulics , counter balances &  gravity ..it sounds complicated but in reality is so simple that ancient humans used the idea to raise things that were too heavy for a couple of men to lift/move  .

You'll need two long strong ropes about five times the circumference if the drum , one or more strong heavy duty water tight bag , bucket or sack capable of say 5 gallons or so of water  ( A Britihs gallon weight 10 pounds
Wrap a long rope round the drum , tape it on over the first foot or so so it stays put as you wrap the rope round the drum  , securely attach a very large strong plastic bag , bucket or sack  to the rope having put a fu=iller tube  in the neck if you are using a sack .
Tie the other rope to the back sack or bucket &  lay this rope out straight .
Now fill the bag bucket or sack with water from a hose pipe
If the weight of water is enough   it will take very little effort to m ove the drum & it will wind the second rope round the drum as it heads to the ground .
When the water container is on the ground  empty it . reattach it high up on the now wound on second rope & fill as before to turn the drum back in the opposite direction .
.
If you can you might be able to get the water bags set up on an over head pulley set up so you can stop the drop as the height of a stool etc so you can pour the contents of the bag into a bucket or three for watering the garden later on

I've only had my 27 cu.ft. bin since last Fall. Turning the material is great exercise but I am zapped after turning it. I'm a few months older than sanderson

.  I have room to add another bin which would mean I would not have to move the material twice each time I turn it. Now I'm waiting to see the results of sanderson's rotator bin which may inspire me to go that route.

Personally I think you'll regret that. I am going to make 3 bins larger than I had. Not much larger, however try to work the bin in a day apart. It won't hurt the turning at all. And when I did tire I just took smaller fork fulls. A 27 cubic foot bin is a nice size to have and gives great results.

I use a small round , tapered tined pitch fork that was specially made for me by Bulldog Tools , Birmingham UK . to fork things over and dig  in the garden outside of the ANSFG beds  .

Using a brand new  two tined pitchfork they made the  U flat where it joins the shank , after squaring the original tines up  they , welded the new set in place , then they put it on a long pitchfork shaft .  All four tines are now about 1.5 inches apart  & seven  inches long t.
A slight one inch curve has been formed across the front plane to help making scooping things up easier .

I filled the compost tumbler about 1/3 full with mowed alfalfa hay, horse manure and last summers wheat bedding straw as a brown. Had some old non-fat milk so I added half of that. Watered and slowly tumbled to mix thoroughly. Now it's watch, wait and learn.
____________________________

@sanderson wrote:I filled the compost tumbler about 1/3 full with mowed alfalfa hay, horse manure and last summers wheat bedding straw as a brown.  Had some old non-fat milk so I added half of that.  Watered and slowly tumbled to mix thoroughly.  Now it's watch, wait and learn.

When material in a tumbler lumps together, that is an indication of to much moisture....Your temperatures are great

I just realized that a tumbling composter actually has yet another use.

If it's one of the ones on a stand that you can get a wheel barrow under, you can use it to mix your MM.  Dump equal amounts of everything in.  Tumble about and empty into the wheel barrow.  Nice and easy - at least in theory.