May Avatar: Not Just Veggies! (click this)
Welcome to the Official SFG Forum
!!! Happy Gardening in 2020 !!!
Search
Latest topics
» August planting
by has55 Today at 10:41 am

» CANADIAN REGION: What are you doing July, August, September
by Kelejan Yesterday at 7:19 am

Kelejan ... I had to fill out and send in that same "still alive" paperwork for my 89 year old mother a few weeks ago. Problem was that she was about to miss the deadline and would have been cut off. I fax'd it to the UK and then the pension office telephoned and said they would extend the deadline as long as we mailed in the original copies. I think she has to do this every year. One thing I could never understand is why those English pensions are not indexed for inflation for UK expats living in Canada but they are for expats living in some other countries like the USA. It's something to do with Canada (a member of the Commonwealth) not having a pension treaty with the UK. Very strange.

Kelejan ,
We have the same problem in reverse .
Mother in law being the last of the older family died  in Canada some six years ago having part of a British Army war pension because of her second husband & her first husband who was in the RAF .
Whilst we are trying to conduct the closing up of the estate by email ,  we still have to send recorded signed for letters  to back up almost all the emails we've sent . All due to there having been several new people at the Canadian solicitors and all previous correspondence on the missing peoples computers seem to have disappeared.  It's so frustrating because she'd supposedly got everything put in order by her Canadian solicitors two years before her demise.

There is a little matter of about $ 12,000 Can .  outstanding and can we get it sorted ?
Unfortunately No ! ,  we keep getting bleats about the Canadian inland revenue requesting more paperwork because the account is not closed for which the solicitor will no doubt be be charging us an arm and a leg for .

trolley driver/PLantoid, I know what you mean about British Pensions in Canada not being indexed.  When I started out my pension form the UK and Canada were about even.
Now the Canada give me about twice as much and  added GIS (guaranteed income supplement) to bring me up to a certain income level.  It is unfair that Canada has to make up the shortfall.  We have been fighting for fair play for years, as we paid out National Insurance just like everyone else. This also applies to Australia and New Zealand, also South Africa.

If I lived south of the USA/Canada border, my pension would be indexed. If I was able to snare a nice American male, my UK pension would double.  I am not sure what the total extra money required is actually, but it is a drop in the bucket compared to what is spent on some things, such as 50 Billion Pounds to the EU every year and all the expenses that the MPs get.

Hope you get things sorted out, and soon.

With all the technology, one still has to send the paperwork by mail; I think that     was why my original stuff got lost.  It takes ages anyway; I sent the second copies and I think it got there two days after the second deadline which is why I faxed them to make sure they got it.  Anyway, my money has been transferred to my bank account yesterday.  I don't know if I have to do this every year.  This was the first time, and I understand that they have to be careful as I assume some people keep their elders "alive" rather longer than they should.

As you can imagine, I am now feeling much happier and more relaxed.

What an amazing photo: 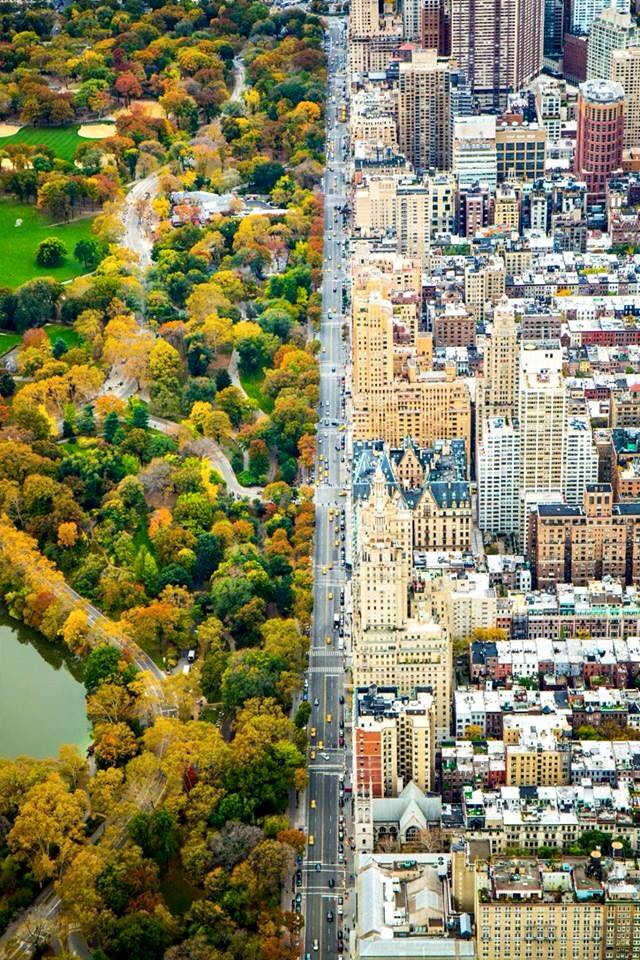 "The split of the two worlds between architecture of the city and the Central Park. New York"
https://www.facebook.com/WonderfulEngineering/

Stunning contrast. What foresight those planners had, and the overwhelming temptation to exploit that land. NYC would not be the same.....nice pic!

Yeah Central Park is a major milestone in making cities livable. Building something like that today would be more or less unthinkable; we don't have as much vision or optimism as we used to.

Something very similar in Vancouver, B.C. where we have Stanley Park, which if it had not been protected, would now be full of skyscrapers and humanity, instead of a wonderful oasis for the people of Vancouver.

Here in my local town we have a wonderful Millenium Park alongside the Columbia River, and we now also have the Millenium Ponds, and outdoor complex of three pools of differing sizes. It is turning out to be a very beautiful place. It is taking years in the making, 15 to date, and each year it gets better and better.  It is all paid for and we only update when we have the money for it. Some of the area will be left semi-wild and will be home to the Camus, a rare species of wild flower that seems to be viable in our park and not elsewhere so needs to be protected.

Beautiful, Kelejan! Preserving wild space in cities is so important!

We have a green belt around the older parts of Ottawa. The more recent suburbs are on the outside of the greenbelt.  The greenbelt which is run/controlled by the National Capital Commission has plenty of woodlands, wetlands, wildlife and trails for hiking and cross country skiing.

In England London has a Green Belt that is called the Lungs of London.

Unfortunately, it has always been under attack, especially now there is talk of building on it due to the numbers of people migrating to the UK.

Here in British Columbia we have the Agricultural Land Reserve, which is self-explanatory, and over the years that has been nibbled away on a regular basis.

The trouble with using these kinds of land is that when some of it is used, it can never be replaced.  It is gone forever.

Why is it so bright outside?  What's that blue stuff above me?  And why aren't I getting wet?

@AtlantaMarie wrote:Why is it so bright outside?  What's that blue stuff above me?  And why aren't I getting wet?

I don't know because it is not bright outside and I sure can't see any blue stuff.

When it darkened here, I saw these lights flickering above me....  I wonder what they are....

LOL - I can finally see some blue in the sky and actual sun.

On our road trip across NV at night, I had husband pull over to the side of the 2 lane. Confused, he got out of the car when I did. Then I pointed to the sky and the Milky Way belt reached from horizon to horizon. There were so many stars in the sky that I couldn't find the Big Dipper and Orion, the only 2 I know. Living in the city of pollution, fog, and farm land dust, true blue sky is uncommon now. Only after it rains, and you know how often it rains here, Until he met me, I don't think he stopped to smell the flowers, or wonder at the MW. Just stick with me, baby.
____________________________

I love astronomy. Took it in undergrad, very interesting. I have an Astroscan telescope, idiot proof, but the kids broke my Barlow lens over the summer. That is my Christmas present to me.

Right now the Perseid meteor showers are going on. Need a moonless night, or moon dark. And just get cha some sleeping bags and watch.

Sky Guide is a great app. I am sure there are tons! Happy sky gazing! Puts things in perspective...

I miss the stars in our town as the street lights are so bright.  Some time ago  someone crashed into a light pole and the whole town was in the dark for about half an hour.

I took the dog out just to see the stars.  I could hardly  believe what I have been missing all these years. Just a blaze of stars. I actually put in a "Thank You" in the local paper to the person who had caused this mishap. I did make sure that he was not hurt as I did not want to cause grief if he had been killed or injured.

It would be lovely if we had a monthly fifteen minute lights out so that everyone could see the stars.   I am sure the police would have to be on duty in case any baddies decided to take advantage.

Seeing the stars on a pitch black night.  Do you realize how incredibly fortunate we are that we once could have this experience?  Even my lowland home here on Kauai has more ambient light than I would like but up in Koke`e, our 3500 ft high mountain retreat, the sky is dark, the night is quiet and we can indeed see the stars.  How lucky we are.

I have read that folks in cities have so much ambient light that they cannot see the stars.  Also, those with high buildings don't even see sunsets and sunrises.  What a shame.

I know, I live in a sparsely built part of town, and our back yard is dark. The street lights are dim and far between. It truly is a gift to look up and see the stars and other celestial wonders.

One fun thing you can do is go to NASA Spot the Station and sign up for their emails about when the International Space Station will be flying over you. They will ask for your location, etc. Very accurate! And really cool to see that thing orbiting around up there, with all those brave people and scientists on board...It is really bright, I think most folks could see it.

And EarthSky news offers a free newsletter about what's up (pun intended, that is how I remembered the Leonids...not Perseids as I previously sstated).

KJ, That's cute about your husband and stars.

I found this link. I found it has an interesting topic, Study Shows Fast Results with Vision Training