» Using misters
by OhioGardener Today at 7:32 am

» What are you eating from your garden today?
by OhioGardener Yesterday at 6:03 pm

» Winter ponderings about my Mel's mix
by sanderson Yesterday at 12:52 pm

Will my plants ever survive?

My poor Cabbage plants where almost destroyed by those "Waskly Wabbits" I put a fence up and they started to recover but now they are being eaten by cabbage worms.

I just went thru all my plants and found alot of eggs but didn't see any of the worms. I trimmed the plants so there are no holes left to make it easier to spot any newly eaten leaves. Where would the worms be hiding? Do they eat anything else besides cabbage? I did check all the other plants and found a few eggs on some broccoli and cauliflower.

Anyone else having problems with these worms.

oh yes, they destroys all my cole crops last year. I ended up giving in and using Seven

But this year I am prepared! They are already covered, and I have some extras that I am planting uncovered a little ways away

psst! did you plant some sacrificial cabbage?!

oh I like that "sacrifical cabbage". Do i need to do a ceremony?

If you can, cover your cabbages (and broccoli, if you have any) with some insect mesh, otherwise you'll always have caterpillar problems.

We set several onion plants around each of our cabbage plants this year, and devoted three squares entirely to onions in the 4' x 4' box in which we planted our eight cabbage plants. I watched several times as the white cabbage moths (with the one black spot) flew over the box, hesitated, and then flew on. So far I haven't seen a single worm - (knocks on wood/head.)

Our daughter is finding a few worms on her cabbage - she lives near Salt Lake City - and I suggested she tell her four-year-old son she will pay him a dime for every cabbage worm he brings to her. If he's anything like our kids were at that age, there won't be a cabbage worm left within 10 miles.

If you feel you must spray, rather than Sevin I recommend using Bacillus thuringiensis (Bt) sold under names such as Dipel or Thuricide. It is a bacteria which makes the worms sicken and die within a day or two of eating it, but it won't harm most beneficial insects, fish, or humans. There are forms approved for organic gardeners. I used it years ago on a very heavy infestation, and it worked unbelievably well.

@boffer wrote:psst! did you plant some sacrificial cabbage?!

You are funny Boffer.

Believe it or not, I saw the first white moth hovering over my broccoli plants on April 29.

But by that time, I had all but finished up with the broccoli harvest! They were late, my friend.

I sort of suspect our weather had something to do with all of this.

I specialize in "dumb luck" and my onions just happen to be in the same box as my broccoli. No plan involved. I JUST read that planting mint and oregano near cole crops as well as mulching with mint and oregano sends the momma moth else wear. It seems to work. I was seeing the moth every time I was near the garden until I potted up oregano and mint from the herb garden and set the pots on the lattice grid around the broccoli seedlings. That same afternoon I saw ONE moth flit near the box and fly away. I have not seen any since. I'll still be looking for worms, but so far it seems to do the trick.

I have PLENTY of oregano; it truly grows like a weed. I used to toss the extra into the compost but now I set it to dry on the grid where the broccoli is. Once it turns into a crispy critter I crumble it around the broccoli.

Pots of mint and oregano on the grid (they are now, when I snapped the pic some were in squares) 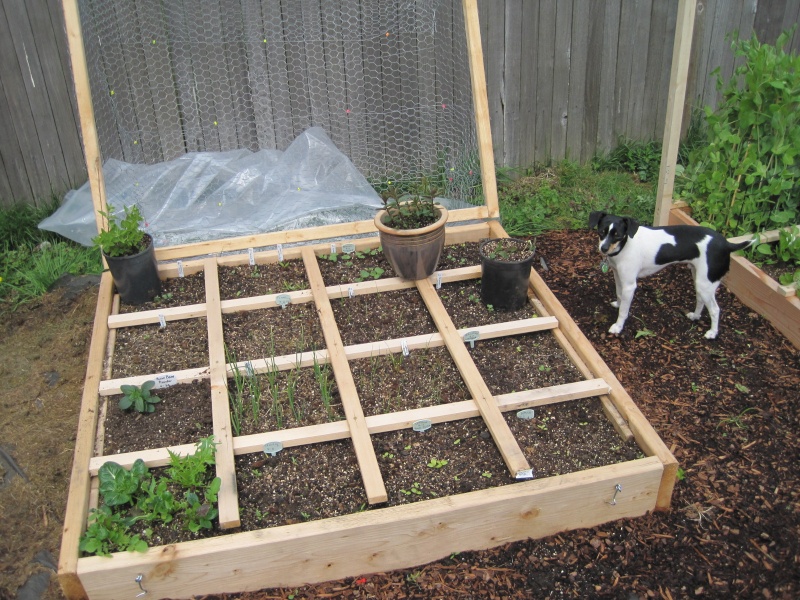 Good idea! Thanks. I'll have to put a few pots out by the garden. I don't have any room in the bed for plants right now. I am also going to try some diatomaceous earth because of the little worms I already have. Thanks for all of your responses.