May Avatar: Not Just Veggies! (click this)
Welcome to the Official SFG Forum
!!! Happy Gardening in 2020 !!!
Search
Latest topics
» beneficial nematodes
by OhioGardener Today at 12:43 pm

» Planting Asparagus seedlings.
by OhioGardener Today at 11:56 am

Tomatoes Not Suitable for SFG

Tomatoes Not Suitable for SFG

Based on his experience with this method, he said tomatoes were not suited for a SFG. There were several reasons. Because the plants were so large, they shaded the other smaller and shorter plants. Because there is little ventilation between plants, they are prone to fungal infections. He recommended that the home gardener plant them in pots with plenty of sunlight and, more importantly, with plenty of space between the plants. The greater the space, the better the ventilation and therefore the less likelihood they would become diseased.

I have never grown tomatoes in my SFG but my wife has had great luck with the method recommended by this AEA.

I welcome any dissenting opinions.

Tomatoes Grow Happily in a SFG for Me!

Any tomatoes that I have ever planted in a SFG have always thrived!!!
I have either placed 4 in the middle or 2 - 4 at the back with a fence or the netting - at numerous locations throughout the years and these tomatoes are always abundant in their growing and giving!!!

I do tomatoes in both SF beds and in buckets growing up trellises.  The key is pruning the indeterminates up the trellis to allow for the ventilation as the agent is correct there and keeping them on the north side to avoid shading the rest of the bed.  Determinate tomatoes take up more room in the bed than I am willing to give them so they get a cage in a bucket.  Lack of planting squares for all the different veggies I wanted to plant is the biggest reason  I switched over to buckets, but I have had good success with north trellised tomatoes in the bed.

erbarnett, I am curious if the Ag agent had first hand knowledge or if that person was using the book smarts? I guess it would depend upon a lot of things........local climate, weather, variety, spacing, proper management with trellising and pruning, proper inspection and treatment of any noted disease.....

I have had tremendous success with growing tomatoes in my SFG.
https://squarefoot.forumotion.com/t3574-the-end-of-july-7-weeks-until-frost

Haphazardly supported wicked tall gilberties on the north side of a 4x6 box. 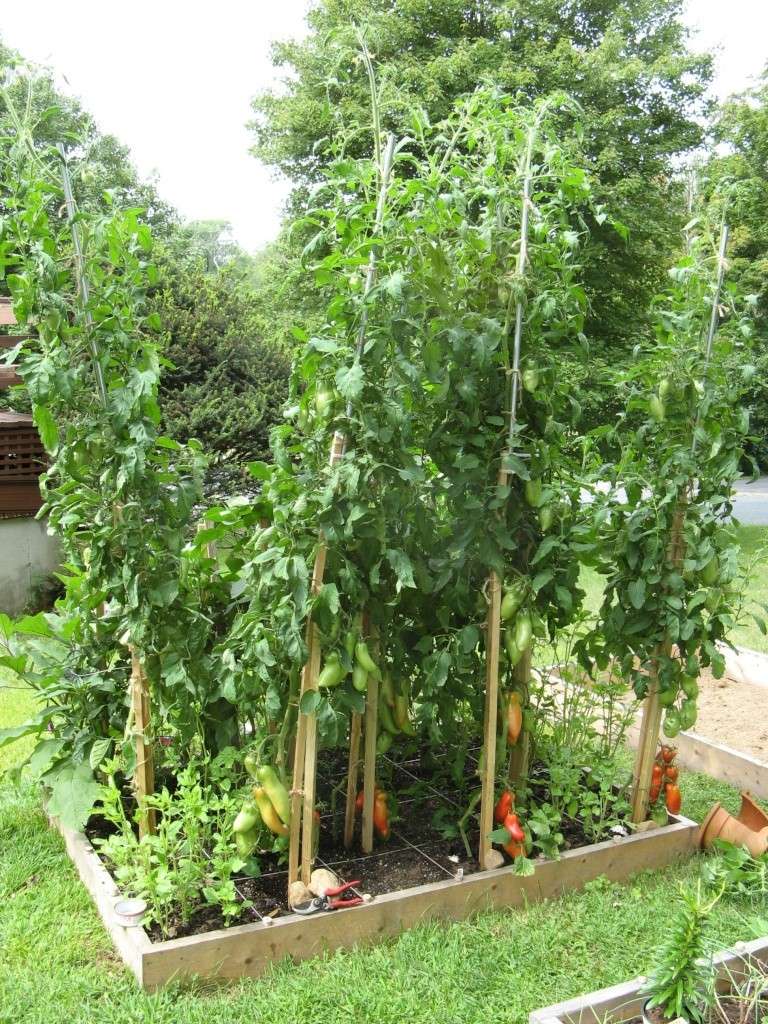 My 8 foot tall tomato plants beg to differ with the AEA.

Camp - those gilberties are amazing!

Ebarnett, I didn't plant my butternut squash in my SF boxes this year - I didn't have the room to spare. I planted some in pots - large pots - with beautiful, hand crafted MM. Others were planted in areas with mediocre soil. And I made a new bed with the same MM as what I used for the squash.

The results were - best plants are the ones in the SFG box. Second best are the squash in the mediocre dirt. Third are the squash growing in pots. My conclusion? Grow in pots as little as possible.

And this is my - ?4th? - year successful tomatoes in SF boxes. One needs to select wisely what else goes in the box, as is true of all boxes. Never mind companion planting, just space and sun/shade needs, as you mentioned. And pruning the plants helps a lot. I have one bed of tomatoes that I never pruned, and it's a jungle. I don't expect high yield from that box, but I do from my others. 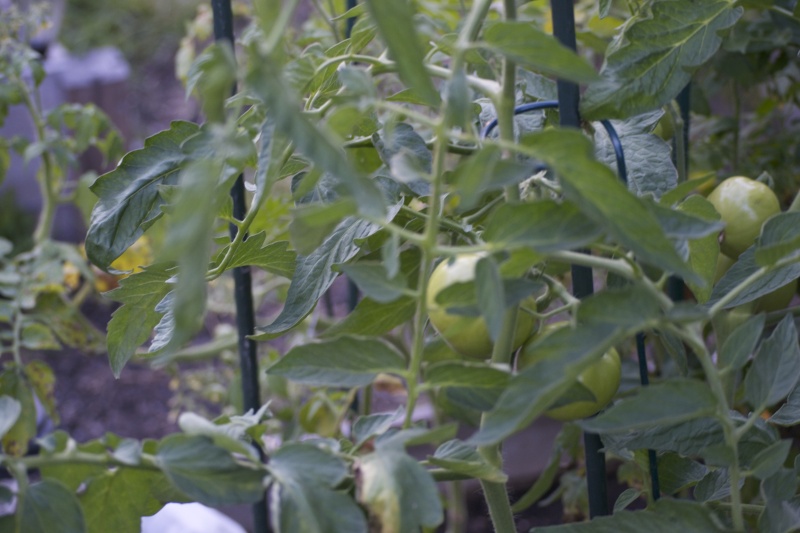 My determinate toms are in 5 gal buckets while my indeterminate toms are in beds.  Both types have MM as the "soil".  What I've found is that of the 14 indeterminates planted 1:square next to each other, sharing a trellis and carefully pruned/suckered, 9 have gotten early blight.  Of the remaining 12 dets in buckets & caged, only 2 have gotten early blight.  Mind you, I've been careful when watering and I made sure to prune the lower foliage preventively on all the toms.

I've also noticed that some of the indet. toms really dislike sharing the trellis and/or being pruned (Black Krim for one), having a stocky, blocky habit which would be better suited to be left to spread out in it's own container, or planted over 2 squares.  I recall that others have commented on wanting to give their toms 2 squares in their future plantings as well.

So for me, at least, I'm going to grow most of my toms in buckets next year, leaving just those varieties that have a lanky habit and which don't seem to mind sharing the trellis in the raised "proper" SFG beds.

Click "Preview" each time you post a photo. That will "clear" it to allow you to choose another photo.

Based on his experience with this method, he said tomatoes were not suited for a SFG.

My experience has been awesome this first season with Mel's mix, not only tomatoes, but everything I have tried so far except spinach, working on that now. I have always trimmed my tomato plants, 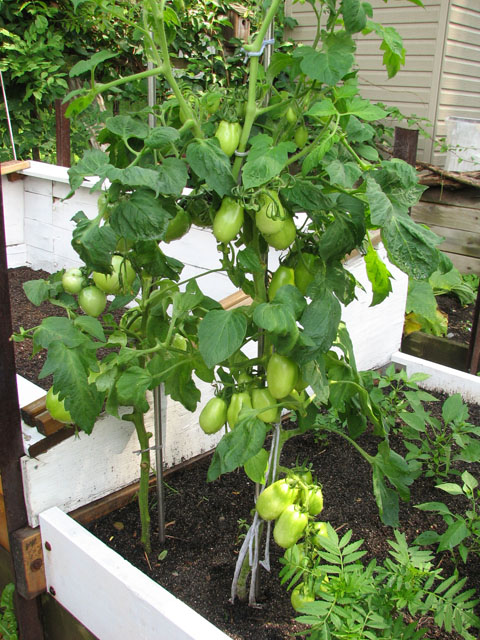 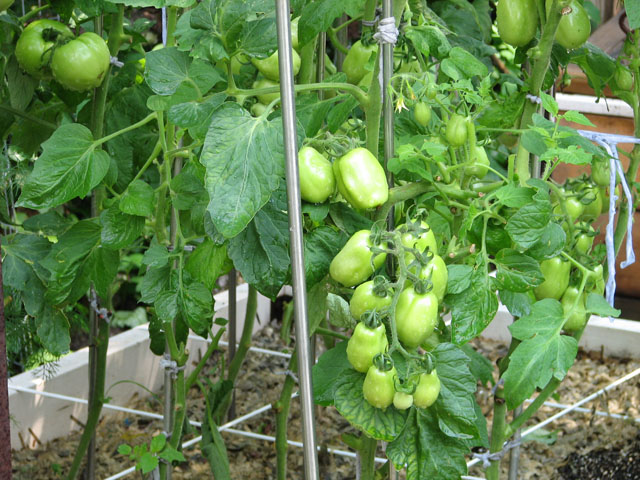 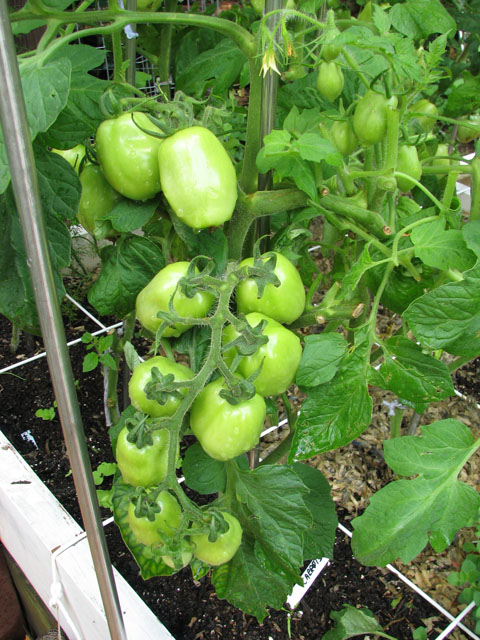 I've had a lot of disease/wilt/viral problems sweeping through my neighbor's garden, where I grow most of my stuff. The tomatoes either growing naturally or pruned so that their leaves and branches are furthest from the ground have had far fewer problems than the ones I either let grow too wide and wild at the bottom or bought as already very bushy transplants (I had heard you were supposed to buy them that way -- bad advice methinks!) from a nursery.

I've had several rounds of disease trying to make its way through my plants, and the more I prune, the better I seem to be doing.

I suppose some of that is likely to be because a root system that had previously been feeding multiple stems and many branches eventually winds up having to take care of far fewer, and can perhaps keep those especially vigorous?

At any rate, growing close does have its problems, but pruning seems to solve a lot of them. And growing them so they don't need pruning in the first place is probably the smartest thing.

My 8'+ determinant begs to differ, also.

I think that naysayers need to TRY before they criticize.

One master gardener told me she didn't think SFG worked at ALL then proceeded to tell me how successful her mom's SFG is and loves how easy it is.  HUH?
____________________________
I have seen women looking at jewelry ads with a misty eye and one hand resting on the heart, and I only know what they're feeling because that's how I read the seed catalogs in January - Barbara Kingsolver - Animal, Vegetable, Miracle

My garden success with toms would beg to differ also.  I had only limited success with tomatoes UNTIL planting them in SFG's.  Having them properly spaced, held up by a trellis, and pruning (altho' only haphazardly) made SO much difference in my crops!  Looking forward to this year's harvest once again!

Clearly, with good management and luck with weather tomatoes have a place in the SFG. And buckets.

I am growing an indeterminate called green grape, this is my first year for this variety, i don't trellis or cage them. I just let them pile on the ground; that helps protect them from the heat and doesn't take up any of my garden space. Except for the daily horn worm "hunt" they are doing well. 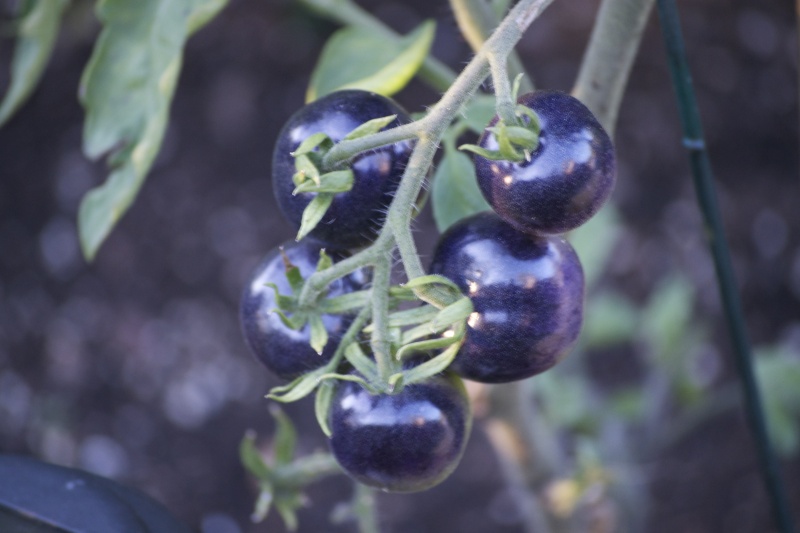 Above - Indigo rose tomatoes - reviewed in another thread. Beautiful, not very flavorful.

Below - This isn't a great photo, but there are huge numbers of flowers that will hopefully turn into white currant tomatoes. 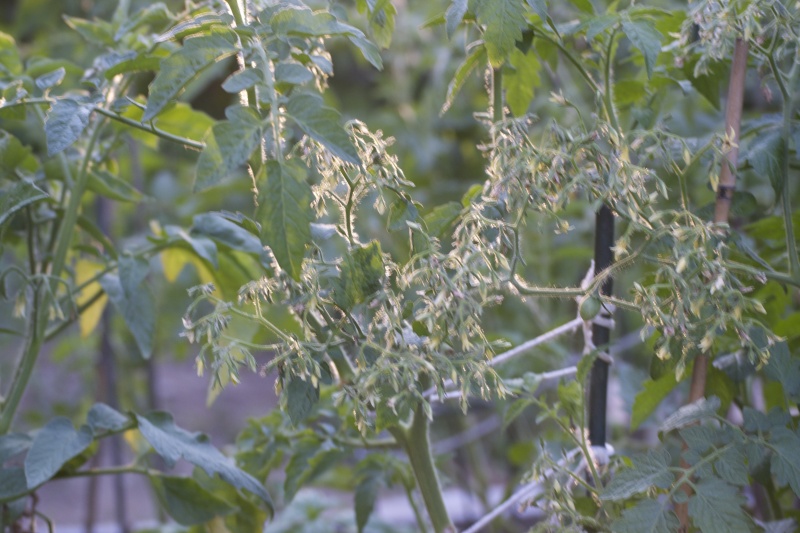 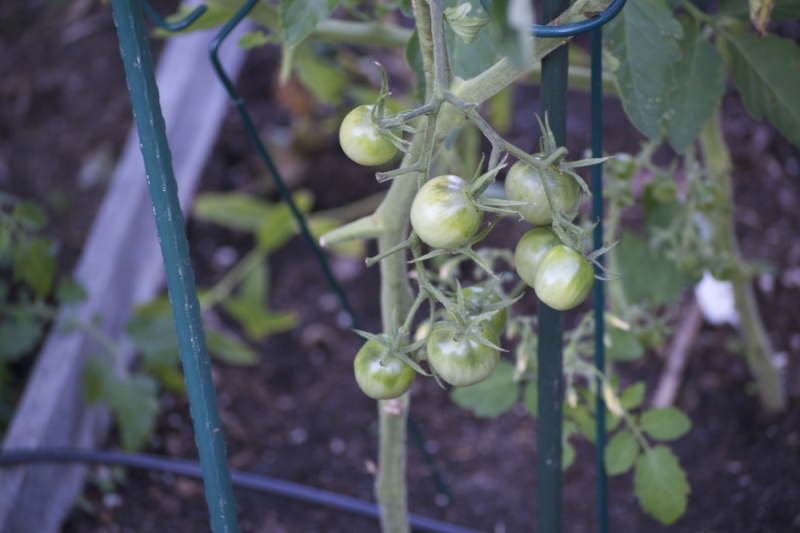 Two birds with one stone - tomato photos, and figuring out how to post multiple photos in the same post. (A problem referenced in another thread - thanks, Camp!) 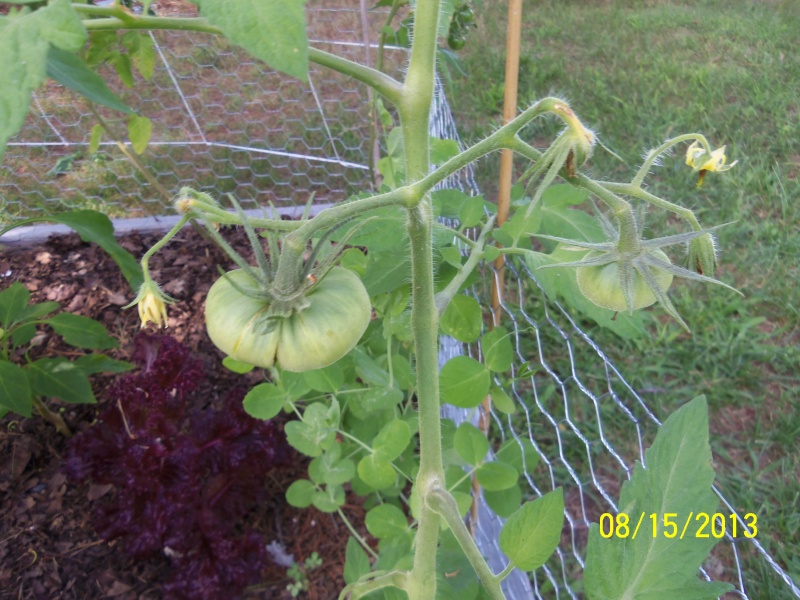 I'm a nut for planting the tomato suckers that I pull off my plants. They're everywhere, loaded with fruits and growing like crazy.

@erbarnett wrote:... he said tomatoes were not suited for a SFG...

Tomatoes are not suited for a SFG - unless you want 8' tall, dark green, healthy plants, with so many tomatoes that you can't count them all.

But seriously, I LOVE my SFG, and my heirloom Tommy Toe Tomatoes are my most healthy plants.
Madge

This is a pic of two tomatoes, planted in 3 square feet.  I pruned it some and tied it up, but finally just let nature take its course. I put up my cattle panel arch after planting, and thought these could grow up two small trellises, tied to the top center of my arch.  With Cantaloupe & watermelon climbing the arch on one side, and beans climbing the other side.  Bad planning on my part.  But only because they took up the space that was to be my pathway.  They really just needed a side of the arch for themselves. 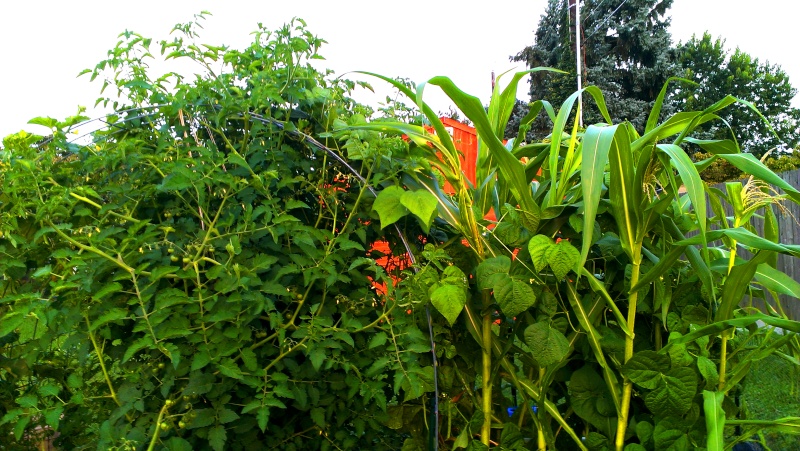 The jungle of leaves have helped keep the plants cooler in our 90 degrees this summer.  But next year, I promise their daughter plants a cattle panel arch of their own, (and proper pruning). 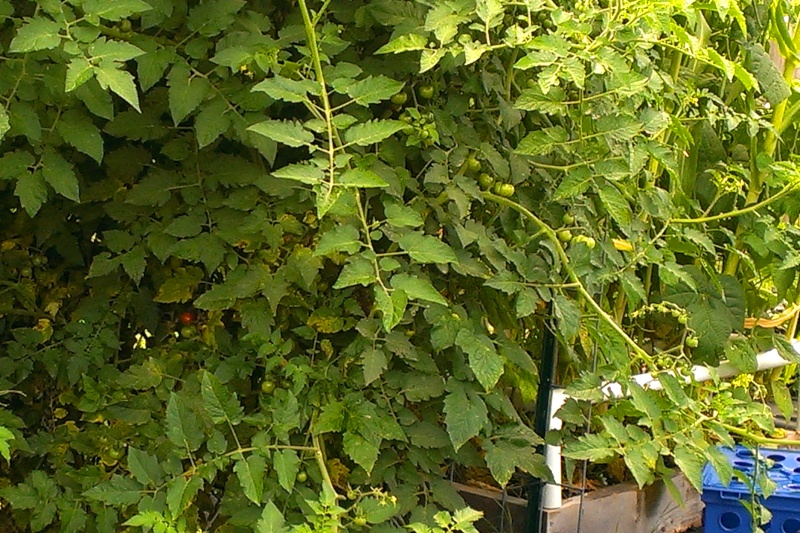 Here is a pic of same tomatoes in the middle of the arch, on July 17th.  Best laid plans... 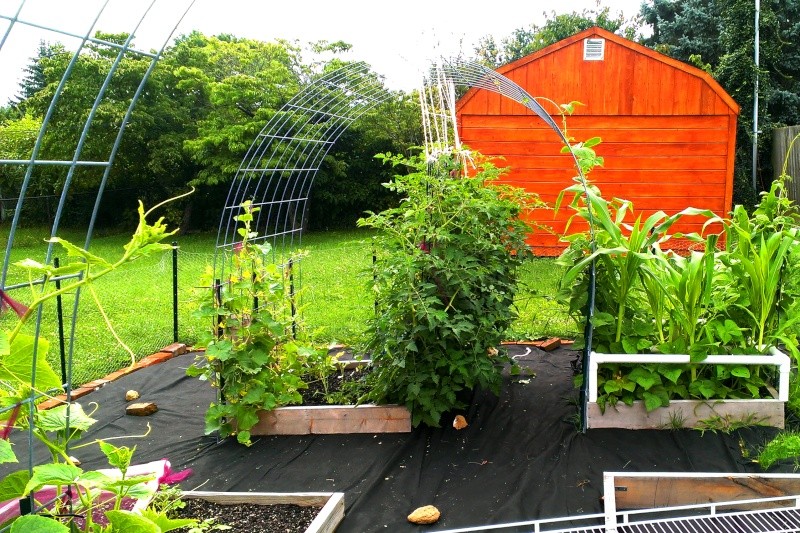 Wow, that is some great growth, unit649! Those tomatoes really branched out!

Unit, So clean and green. Congrats!

I live in an area known for having a hard time growing tomatoes, as we have a pretty short growing season here in Idaho. I have grown tomatoes with great success the last 3 summers...and this year I let my volunteers (I had SO many toms last year and the plants just kept going that in sept when we got our first freeze I still had green ones on the vine that rotted and got tilled under, seeds from these germinated in the spring and gave me volunteer plants) from last year come up just to see what would happen. I estimated that they would never produce in time, since a seedling in June surely would never grow big enough in time to produce a tomato by the first freeze here..and boy was I wrong. Pretty amazing. There is no garden like an SFG garden...Toms included. :DGive it a try. You can always do pots later if you don't like it.

I have decent luck with tomatoes and the SFG...but with our wacky weather over the past two summers even hybrids like Celebrity and Jetstar have cracked, split, scarred, and sunburned on the SFG trellises...just not enough shade to protect the fruit from the brutal sun and weather.

My best tomatoes come from old school caged plants with plenty of leaves to shade the fruits.