I'm finding out that the hot, overcast, foggy morning, late afternoon showers days we have had for the past weeks are the driving force on my tomato blight. 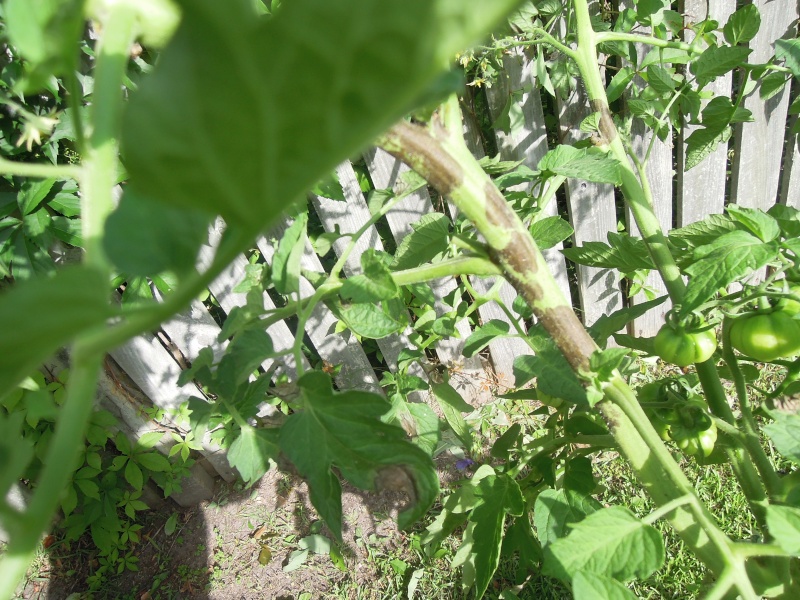 It is airborne and can be spread from potatos. I have potato fields withing 1/2 mile of the house. It is the same disease that caused the potato famine in Ireland. Prevention is the best thing and I had sprayed with Neem which is a fungicide, but it got away from me. Now all I can do is trim out what I can, spray with a copper fungicide (if staying organic) or go to a chemical fungicide. Or rip out all my tomatos and start over.

I'm going for all three. Some will get copper, others will get the chemical and still others will get both as they can be mixed. The ones worst affected I'll rip out. And I bought some new starts this morning which I will plant in buckets in the side yard and start in with the copper spray immediately.

Curious for an update on your tomatoes, what has worked best for treatments for you?

Almost weekly sprayings with copper fungicide. After cleaning up the plants, I have been able to keep the blight contained. May have helped that the potato fields got harvested.

Wow, that's great! Way to go Kay, I think I might have panicked and pulled everything!

Ok maybe I am freaking out but I have something going wrong with my biggest cherry tomatoe plant. 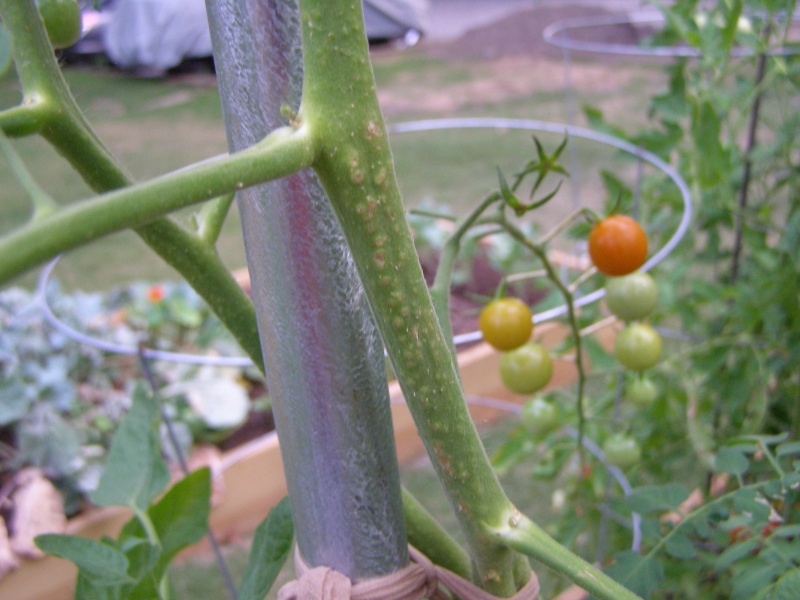 and yet another place

some of the leaf issues 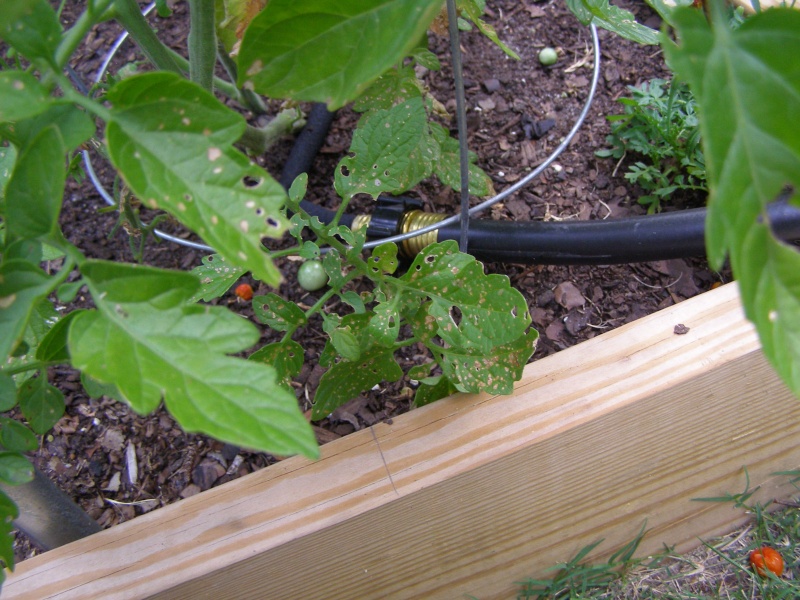 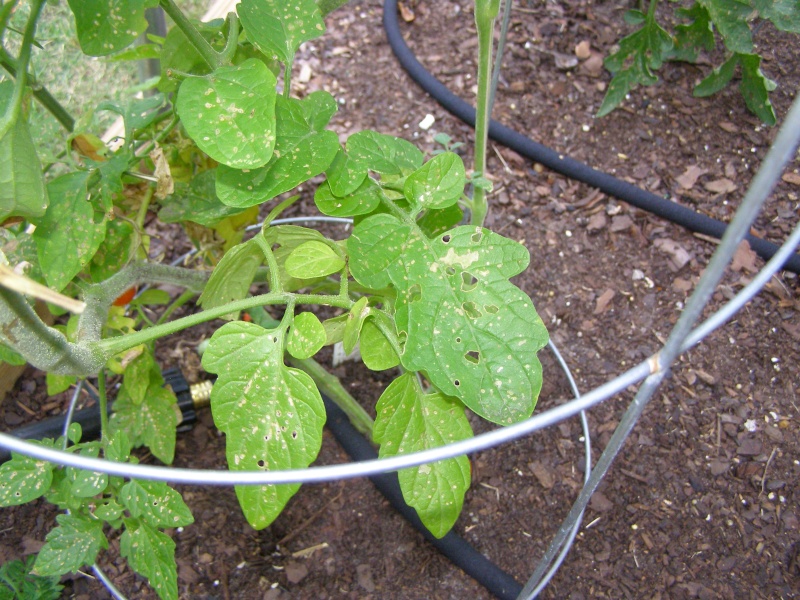 I heard there is a major breakout of late blight from another e-mail source( organic gardening or Burpee or ...)I accidently trashed it there were pictures of the various stages. Now I am afraid I got it. What do yall think ????? Do I need to preemptively tear the plant out???

Your plants look too healthy for blight. It may be this
http://www.ehow.com/info_10046492_small-bumps-tomato-vines.html

I have a site that you may want to look through. I found two other sites also but the following site has more to it. It had so many things listed that it may be time consuming but it is informative. http://www.ipm.ucdavis.edu/PMG/selectnewpest.tomatoes.html

Look up early and late blight, the symptoms don't match yours. You may find what you are looking for on this site. Good luck and let us know what you found.

I am glad to know I was just "freaking out". The tomatoes( and cukes) have been the highlight of my garden so far this year. I about killed my green pole beans by not seeing the aphids( cursed little boogers, looks like the insecticidal soap is starting to work), and pickle worms have come back on the cukes(BT time); PM is tring to rear it's head on the squash( neem holding it somewhat in check). There is just so much to learn and so little time before disaster strikes.

Walshevak wonderful pictures so we can see what blight looks like and you described your treatments so wonderfully! I am so glad that you are having success with your war on the blight! I have learned so much from your posts!

A BIG THANK YOU to the both of you: Triciasgarden and walshevak

Just be prepared for the dog days of summer. Tomatos need warm weather but do not set fruit if the night time temps are in the high 70s. And I've never been a season without some sort of blight hitting. Usually the one that just affects the leaves and turns them yellow and brown and more like the lower leaves in you picture. Wish some of the Texas folk would join in so we could see what happen in the region that gets hotter earlier. I am going to be more diligent with my fungicide spraying from now on. My cukes are not looking too hot either and I'm going to get some starts and plant a few extra JIC.

All of my tomatoes look really good except this one. Do you know what's wrong with it? It is a brandywine?

Now that looks like early blight. Trim and spray with fungicide. Start with the least toxic, baking soda a water blend. Believe Rowena posted the recipe. Or Neem. If you need to step up, copper fungicide is considered organic. As I understand, you will never get rid of it, but you can slow it down enough to get a harvest.

Thanks Kay, I think I am going to pull it and put it in a bucket away from everything else. I still have a few extra tomatoes I haven't found a home for yet so I will replace it while everything else still looks healthy. I will trim all the lower leaves and bury the stem up and start with the baking soda solution, we'll see how it goes.

The one in the middle is the same as the early pics. not as full but it does have some fruit. I kept it isolated for 2 weeks. Rest responded quickly to the copper fungicide. 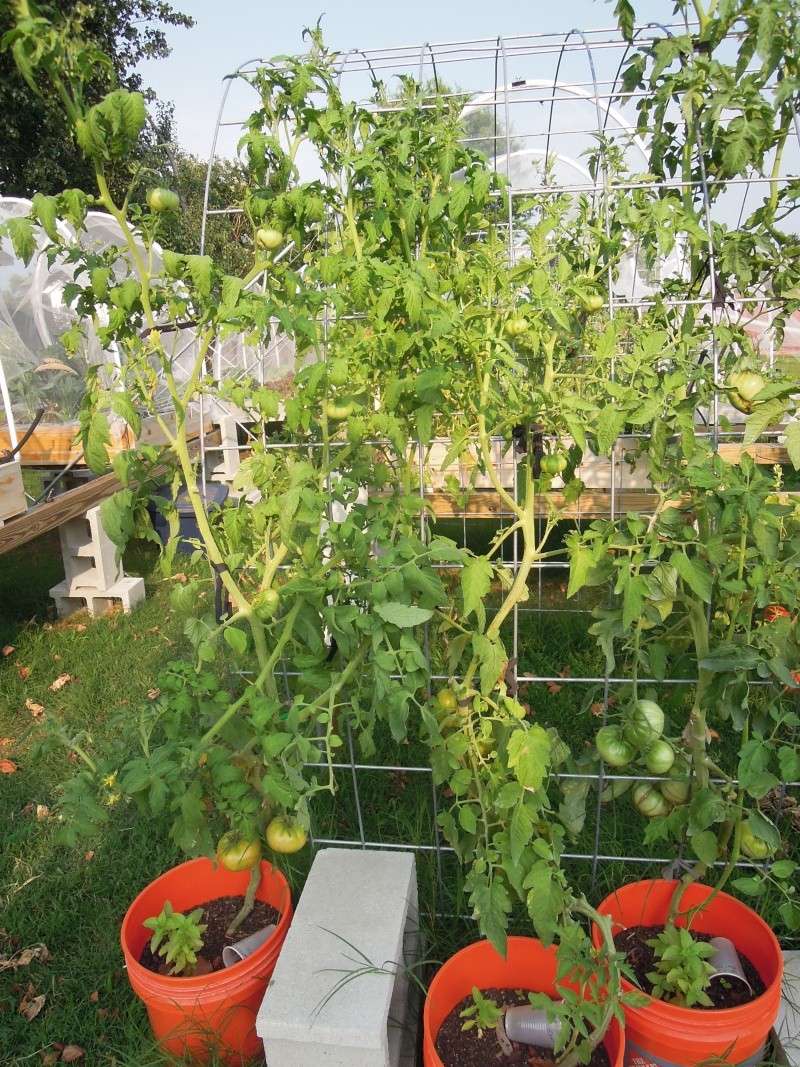 All had the black spots on the stems. I really soaked the black spots and they are now more faded dark grey than the original dark black. I am assuming the fungicide killed the fungus and just the faded spots are left because they didn't get any bigger.
Remember early blight is in the soil. Late blight is airborn. You might be better off planting new maters in buckets.

Yeah, you're right, do you think I should move the other 3 that are planted in the same box. They show no signs and are growing great. I am just glad this happened in the smallest box I have (1x4) . Maybe I'll just do away with it to be safe and plant some more malibar spinach. That would be affected would it?

Update on the black splotches on the stems. After weeks of treating with neem and copper fungicide, here is a picture of one of the blight splotches. 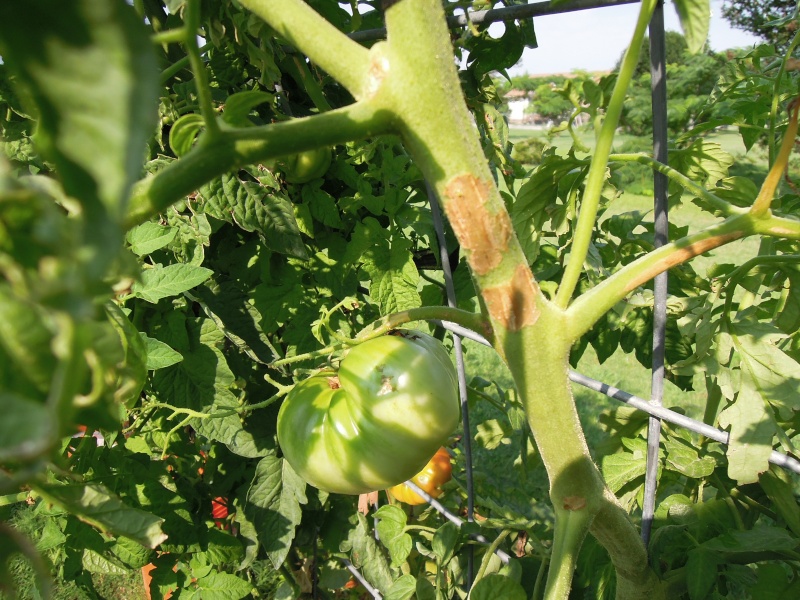 It has healed over and the plant is producing.

That is amazing Kay, I am still new at learning diseases of plants. I did not know that blight could be halted like that. You did good! Good lesson for all of us!

@Pepper wrote:I am glad to know I was just "freaking out". The tomatoes( and cukes) have been the highlight of my garden so far this year. I about killed my green pole beans by not seeing the aphids( cursed little boogers, looks like the insecticidal soap is starting to work), and pickle worms have come back on the cukes(BT time); PM is tring to rear it's head on the squash( neem holding it somewhat in check). There is just so much to learn and so little time before disaster strikes.

Wouldn't it be nice if we didn't have to work so hard sometimes at finding out what could or is eating or attacking our plants! Each year I expect to plant, water and harvest and think any problems I had last year won't happen this year. Duh! This year because of this forum I am able to learn so much and realize I had things going on I should somehow have learned what to do about it! I haven't even begun to learn about worms.

Gardeners Supply puts out a newletter via email. This was in the latest.

Does anyone have a problem with Septoria Blight in their raised beds ?  What do you do about it ?

@Kyblue wrote:Does anyone have a problem with Septoria Blight in their raised beds ?  What do you do about it ?

Good morning! Septoria, early blight and late blight are all distinct diseases found on tomatoes, potatoes and eggplants. The best thing to do is be vigilant in your observations of your plants, removing any suspect leaves with lesions and treating as necessary.
Management is based on understanding the conditions that lead to an infection. By increasing the air circulation in the beds through pruning any leaf stems below the first flowering fruit body  and any upper congested areas and watering at the soil level, not giving the plants a shower, will help the plants resist infection.

There are a few good websites and back threads on this forum for further information.
Blight <~~~click

@Kyblue wrote:Does anyone have a problem with Septoria Blight in their raised beds ?  What do you do about it ?

Kyblue, I got Septora this yr. We had about 25 inches of rain in June. Supposed to water at least an inch per week, not per day!
The tomato plants were about 6 ft tall, real bushy with lots of tomatoes on. The toms. are in a bed in full view of the house. I watched, rain coming down as hard as it could, The Septora started on one end of the bed, and proceded to the other end. All the leaves came off, but the fruit remained. I was just sick, but, I went directly to a chemical fungicide. I sprayed weekly, the stems looked good, no spots on them. I picked the Toms, then sprayed. I harvested 6 gal. bags of toms, but could not save seed. Don't know if it could be passed in the seed or not. On the few sunny days we had, I covered some of the trellises with cheese cloth.
Now the plants(some still alive) have put on some more stems with leaves, but it is so hot that the blooms will not set fruit. Hey, no rain for four days straight!
I think next yr. I will try a preventive spraying, don't know if any blights can be prevented or not.
Jo

Thanks for the reply's and advice.  I believe Camprn has pointed out what possibly could be my primary problem, Air Circulation..I have never seen tomato plants grown like they did this year. Next year we will allow more space between them to allow for more circulation.

This is my first year using raised beds, and was not really sure what to expect from them. So this year we used both the raised beds and the old fashion soil garden and compared their production.  We made 2 4x4x12" and 1 4x10x7" beds for used this year. One 4x4 bed was for early tomatoes, and we had tomatoes a month earlier then anyone else around here, the 4x10 for tomatoes and the other 4x4 bed we used for Cucumbers, Lettuce and Onions. We also planted the same in the soil garden but plants two or three time more of everything. We could not believe how much more we harvested from the raised beds then we did from the soil garden, even with the blight hitting the tomatoes. This year we will be adding at least a 4x8x9" bed and maybe more, depending on how much "home made" compost we have. we will stop using the old fashion soil garden completely.

My best option could be to plan on preventing, or slowing down, the blight should it hit again and then use some type of fungicide later in the season. Again, Thanks for the feedback..
Regards,
kt