Hi! My garden is growing like crazy - and the cucumber plants are taking over the trellis. I just blew the money for a Polish fermenting crock and really hope that I can get a good recipe here. My favorite "store-bought" pickles are "Farmers Market" by Clausen (or maybe Vlasic)? Anyway - they're at my upper limit for "spicy" dills. So how do I get there? I bought a book but just really want this first batch to turn out well.

PS - I promise not to sell your recipe for millions and hog it all.

PPS - If you're interested, I got this one: http://www.harvestessentials.com/5-liter-stoneware-fermentation-crock-pot-from-poland.html 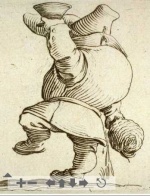 Hi,
Congratulation on your beautiful jar! I make sometimes pickled cucumbers just in glass jar. You can make them in anything, but it would be a real pleasure to make them in a jar like yours.
I am from Poland (where your jar came from) and this type of cucumbers are very popular food in Poland. They are called here, in the US, "cucumbers in brine". In Poland such cucumbers, when well sour, are used in many recipes, and my favorite is a soup made out of such cucumbers.

I buy cucumbers in brine in my local store. They are made by the company Topor's from Detroit and they have two varieties: cukes in brine and "new dill cucumbers" (which are just cukes in brine but "young", not fermented for long). These are the best fermented cukes I have ever had in America and very close in taste to Polish original cukes in brine.
There are several recipes for making cukes in brine, but the main thing is hygiene of preparation, water, salt, stems of dill with seeds, garlic.
Here is one recipe I translated for you from Polish:

For 5 liter jar:
*4 kilograms (about 9 pounds) of cucumbers
*Enough water to cover a jar
*Salt – 1 Tablespoon per 1 liter (32 oz.) of water
*10 – 12 garlic cloves
*Fresh (or dry) dill bundle (that one with stems and seed heads)
*1 chopped horseradish root (about 2” long, or even less if you do not want cucumbers to be too hot – adjust to your taste)
*Horseradish leaves (optional)

How to make it

Wash cucumbers well. Peel garlic cloves and horseradish root – wash them. If using horseradish leaves, wash them too. The jar should be well washed and rinse with boiling water (the lid too). Boil water with salt. Let the water cool down. If you want cucumbers to be ready for eating fast use hot water.

Put tightly in the jar: layer of cucumbers, some garlic and pieces of horseradish (and leaves), dill, next layer of cucumbers, garlic, dill
and horseradish – and so on. Do not put too much dill – just a few stems with seeds (I would say 4-6, depending on how large they are)
When water is at room temperature pour over the cucumbers. All cucumbers must be under water. If they float up and stick out of
water use some very clean thing to weigh them down (like a small jar filled with water on a small plate, etc.). You do not have to seal the
jar, just opposite – the fermentation process needs air (you can cover the jar with its lid which should allow air in. If the lid is very tight cover jar with clean tea cloth or cheese cloth). Put in warm place and cucumbers are ready in about 2 – 3 days. You can also eat them after one day (different taste). The more they stay in the jar the more they will turn sour. Refrigerate them so they won’t turn sour too quickly.

The cucumbers should be crispy. If you smell foul smell, cucumbers are soft, and bad tasting something went wrong and you should discard them. When you have everything clean you shouldn’t have any problems.

Thanks Jola! Haven't got the pot yet. but your recipe will be the first one that I make.

I use this recipe which I got off the web somewhere but can't remember where.

Directions
1. Clean the glass jar and lid thoroughly in your dishwasher or with hot soapy water.
2. Combine the water, salt and vinegar in a saucepan; bring to a boil over medium heat.
3. Remove from heat; cool to room temperature.
4. Pack the cucumbers and the remaining ingredients in a 2-quart (2 litre) glass jar, and pour brine (water/vinegar mixture) over them, covering the cucumbers completely.
5. Store, covered in the refrigerator.
6. The pickles will be ready in 7 days, but the longer you leave them in the refrigerator the better they will be and will keep refrigerated for months (if they last that long!).
7. **NOTE** since the peel is eaten on these pickles, make certain to wash and scrub the outside of the cucumbers well to remove any dirt, I use a small nail brush to scrub the outsides.