Was laughed at this weekend

@KelliK wrote:
Is the fish, blood and bone meal available together or separately? More than just showing off, I would like to have a really great garden to feed my family.

Espoma markets a wide variety of organic products, either separately or as mixes.
http://espoma.com/p_consumer/org_trad_overview.html

@kbb964 wrote:and when you show them the fruits of your easy labor you can make them eat Mel's Mix !

Kellik scratch a tiny bit of fish, blood and bone meal in each square as a dressing and setting up boost a week or more before planting /sowing and water it in well if this is your first ANSFG bed . It's just to cover all the bases in the event of any purchased ingredients not being the quality materials they purport to be


I've said this for your beds develop in quality over a few years once you get making your own composted manures to Mel's formula . Plus I'd not like to see them have a giggle at your expense if things were not 100% ideal for growing in.

Is the fish, blood and bone meal available together or separately? More than just showing off, I would like to have a really great garden to feed my family.

Thanks for taking the time to give me a tip.

Here in the UK it is a single pack mixture of all three components ,you'll have to see what the guys on your side of the pond say.

I'm a first year SFG and I'm going to use this in my beds to give it a boost. It is a little hard to find but I see there are several listed buy you in VA.

If anybody else has used this chime in please.

The Nay Sayers are having a change of heart

The garden is IN! This past weekend, my Husband and my Dad helped me put the garden in. After a couple "we are going how far for what!" comments (1.5 hours away for worm castings) and then "A REAL horse farm, here?!" They proved how much they love me and entertained the journey.

We had a great opportunity to explore our little part of the country and get materials to better our lives, and it was fun!

So back to the house we went. I busted out the tarp, laid it out, gave the guys rakes and started dumping. I put in the chicken (Chikety doo doo), leaf (organic leaf grow from Southern States), cow (from Meadows farms), worm (Veteran Compost), and horse (free from craigslist, composed for at least 3 years and located just outside the horse stables- it had no smell, was nice and brown/ black with very little wood chips). They initially wanted to just dump everything in at one time and buy a rototiller (DH has to have his toys!) and I told them no, a simple tarp and some rakes would be enough.

You see... I read the book and it has saved me so much trouble doing it the way it is suggested. Our family has always been row farmers and Dad couldnt wrap his mind around this new way, but once I explained all the nutrients and he quizzed me a little, he was quiet and I could tell he was processing the info.

So as I am dumping onto the tarp they are mixing and groaning about not just dumping it in. Then I bent down, grabbed one corner and asked them to do the same. Once both of them walked their side over (to mix it) they both said "ah!, so much easier!" and I laughed. They happily let me dump and we mixed four batches and let the kids water in between each batch. They really soaked the garden, but I think it needs it in the begining, just to get everyting "together" and the verm and peat activated. When the MM was all in, the two of them just had this look of complete satisfaction, the MM was well mixed, it wasn't an all day event and now, it was done.

My husband then marked out the squares and screwed screws in the side so I could tie in my grids (I decided to go with string instead of more wood- its easier on my eyes and still has the same effect.)and was done for the day. I tied in my grids and both my nay sayer neighbors came over (I think my husband had a chat with them about how easy it was lol). They saw me doing the grids and later planting some starters from Merifield. They were amazed at how nice the garden looked and how quickly we got it in.

Now, I know they will be watching me. Our one neighbor has had her plants in for about a month, so we will see the difference in the MM.

If I could figure out how to post pics, I would, but for some reason my computer here at work won't let me. I will try to send some from home. 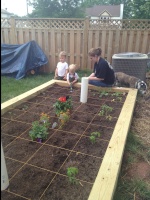 I forgot to mention that I also put in the worm tubes (again another explination to the hubs and dad) and added the occupants (the boys LOVED this part). And on top of the garden I added a gallon size bag of free Starbucks coffee grounds. I didnt get the bone meal, it kind of just slipped my mind. If you all still think I need it, I will get it and add it in.

On a side note, the castings I got from Justen at Veteran Compost had a lot of worms in it already. I probably didnt need to add any more as they were wiggling all about before I even added the tubes. Oh well.

And next year you won't even have to do that much!!

don't feel bad i was laughed at 10 years ago,when i moved up on this hill.
now several folks around here have raised beds and are close cropping.

My method with the bunny poo
I just broadcast it. and what is left over I put in the composter

there is a bunny rescue near me, yes every year people get bunnies for Easter and 3 months later are looking to have someone take them off their hands

I go and take bunny pellets from them 3 times a year. They used to give me bunnies too, but I think they figured out what I did with them.

SO Happy to say

That my Nay Sayers are slack jawed at our garden. I have to now say its "our garden" because I dont want to hurt all their feelings.

My husband said after learning about the six baby eggplants, 35 tomatoes, 4 cucumbers and an over abundance of herbs (especially dill) that "You really did your homework and got all the right ingredients, I am sorry I doubted you"! Justice is going to taste as tangy as those beautiful eggplant at our "Garden Party" later in July. I walked over to my neighbors and her toms are half the size of ours, and she planted them two weeks before I did.

on a positive note though, my neighbors are so impressed with our garden, they are bringing kitchen scraps for the worm tubes. We have mighty happy wormies.

I am happy for you. When I first read your message, I knew this would happen.