Can I get some ideas for 36" high raised SFG's?

Can I get some ideas for 36" high raised SFG's?

Neewbie here ... I would like to start planning a 36" tall raised garden so no bending is required. I would love to see some pics or glean some ideas from those who have ventured down this path. Thx...

search 'Table Top' or 'TT' in the upper left corner where you see "google" make sure the little box is clicked for "search SFG Forum". There are several people who do table top gardening on here who have shown pictures. As for a really tall box, I haven't seen any on here, perhaps I missed them?

@igolfat8 wrote:Neewbie here ... I would like to start planning a 36" tall raised garden so no bending is required. I would love to see some pics or glean some ideas from those who have ventured down this path. Thx...

Do a search for table tops. There are lots of ideas in several different threads. Here is one:

I still have a few TT pictures in my personal gallery to look at.

@ModernDayBetty wrote:...As for a really tall box, I haven't seen any on here, perhaps I missed them?

Not sure what you mean by 'really tall'.

36" is standard kitchen countertop height. I'm just under 6 feet tall, and find that height comfortable for me. There is one exception: my carrot box is 41", and that extra height makes it really easy to plant and thin carrots.

I have a couple of 28-30" boxes that I made to grow broccoli, cauliflower, and BS in (ie tall plants), but I don't like the lower height.

The ONLY reason for this is since lumber is usually sold in 8' lengths, you can get 4 legs out of one 4"x4".

You can practice both heights. As boffer mentioned, standard kitchen counter height is 36". Well standard dining table height is 30". This way you can see what is most comfortable for you. Don't forget to figure in the height of the mature plant for harvesting.
____________________________
I have seen women looking at jewelry ads with a misty eye and one hand resting on the heart, and I only know what they're feeling because that's how I read the seed catalogs in January - Barbara Kingsolver - Animal, Vegetable, Miracle

@igolfat8 wrote:Neewbie here ... I would like to start planning a 36" tall raised garden so no bending is required. I would love to see some pics or glean some ideas from those who have ventured down this path. Thx...

Welcome ,
Hope you have a long and enjoyable stay here at the All New Square Foot
Gardening ( ANSFG ) site .

Look in the gallery of the site ( in the green banded headings line ) if you have not already done so. There are several sorts to suit all pockets (providing your arms are long enough to reach them

).
My beds are fixed brick built ones ..I can't bend much ,they are brilliant at 36 inches high ( 900 mm ) Some beds are just the tray with a floor , set on cross bearers which are slid in hollow concrete blocks that are stacked on each other .

There is also a simple diagramatic scheme in the book " All New Square Foot
Gardening by Mel Bartholomew " for simple trays .

If you don't have the book yet getting it might save you wasting time , effort & money , by seeing everything we work by.
It is available in the site shop & is a certain way of knowing you have got the correct book

Wow. You grow your own BS? I thought it just came naturally...

I hope I have better BS this year than last...

and my BS improves with each passing year.

Has a plywood bottom atop milk crates stacked 2 high. All milk crates donated by local merchants. I found some discarted plastic lattace some one had put out as trash and nailed that up around it looks great. One mans trash ...

Hey thanks for the warm welcome. I did order the new book and just waiting for it to arrive. I went to the local library tonight in hopes they had the SFG DVD so I could view it before the book arrives. Unfortunately we got to the library just as they were closing. We are really looking forward to trying this new method of gardening. Several have mentioned using plywood in the floor of the bed. Wouldn't this rot out after a year or two or am I missing something? I did see the awesome brick raised bed and I am totally envious! Maybe someday when the ship load of money arrives I can do that too

You build a house one brick at a time .. don't wait for your ship to come in .....life's too short .
Buy a few bricks at a time , In two & a half years time you could have the bricks and learnt how to build them

Nice one Luci .... I'm rotflmbo .
I will stay awake all night , trying to think of a suitable site friendely reply.

Naaaah...don't stay up all night, Plantoid. Just go beddy bye and let your subconscious come up with it!

My neighbor is about the same height and is VERY well endowed. Once while she was checking to see how the spaghetti sauce was doing, she managed to pull a Mrs. Doubtfire on me.

We had to ask for a WOMAN salesperson when she needed a new gas stove. The three of us were rolling on the floor when we explained the situation to her.

I'm 5'7" and the new TT I just built is 24" at the bottom of the bed with 2x8s for the sides. So the top of the bed is about 32 inches. I can reach across the bed (it is about 30 inches) from one side easily. I think I am going to like that height and plan on putting up to pepper size plants there. 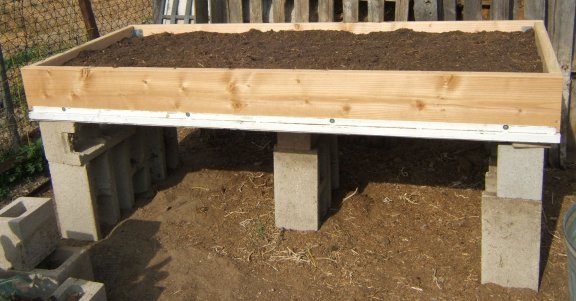 Hubby built a taller raised bed out of cinder blocks for me because I'm partially disabled. It is 4 ft by 24 ft long. The north side has two poles with netting strung so I can do vertical growing. I have a chunk of wood with foam rubber attached to it that I use as a seat and sit on the cinder blocks so I don't have to stand too much.

We filled the bed more than halfway with logs and branches ala Hugelkulture (Google about that). Then we filled it with straw mostly to even it out a bit. The final 6 inches has Mel's mix.

I have a permanent grid in only one direction. We put strings down the long way attached to bricks on the ends to keep them in place. The short way, we each foot on the cinder blocks, and I put down two yardsticks when planting to keep my squares straight.

I know Mel says it's not a SFG without a permanent grid, but... well, I've seen permanent grids installed and then the gardener just broadcast his lettuce seed and had a mess. I feel actually planting to the SFG makes me more SFG than someone who has a grid and ignores it.

If I were changing things, I would make it 3 ft by 24 ft. Reason being
when I have vertical crops growing I can't sit on that side and it's a
bit hard to reach the set of squares right next to it.

But overall, I'm quite satisfied with it. It's big enough I can do serious gardening, I can stand long enough to tend vertical crops, but can do most of my gardening sitting.