Has anyone grown blackberries in a Sq. Ft. garden? I bought a blackberry plant and am not sure where to plant it, in sq. ft. garden, a large pot, or in the ground. Will need to devise some sort of trellis for it as well.

Also, I bought three baby dwarf trees -- mandarin, almond, and jujube. This was a bit ambitious for my tiny urban plot. There's only room for one in the ground. The other two will have to go in containers. The nursery said I should use real soil in the container, dug from my yard. Does anyone have any ideas about the soil to use for container trees?

you will find as you are searching this forum, that due to raspberry/blackberries being a very invasive plant...they recommend planting on its own and not in the garden. you can build its own smaller box if you want. My plant is to plant them in my tree area (still gets good amount of sun). I have a large bare area that i'm going to buy lattice and nail to 2x2 and post in ground. I plan to dig a large hole for each then put the MM in the hole to help it grow. Eventually the plant will grow thr the clay/dirt area and really take root. But that's my recommendation.

The newer thornless blackberries aren't as invasive. See this post from Josh when I posted a question last year. Mine did not spread by roots, but they were only planted Spring of 2010.

When reading blackberry posts, remember that blackberries in the south and midwest mean a plant this is very different from those grown in the PNW. I'm not sure which kind you have in California, but here, blackberries grow on a cane and can be managed by pruning. As I understand it, blackberries in the PNW are an invasive vine. (Someone please correct me if that's wrong.)

When we planted our fruit trees, the accompanying paper said to dig a hole, mix the included fertilizer pellets with the removed dirt, and use it to fill the hole around the roots. Our trees have all done fine. As long as you don't have heavy soil that will compact around the roots and impede water flow, your soil should work. Otherwise, mix in a little organic matter or vermiculite to improve the water retention and drainage.

Is there a label on your new Blackberry? That would help a lot in knowing what to expect. This might sound dumb but saying you have a blackberry is almost like saying you have a dog, there are so many different kinds, sizes and temperaments.

@sheslostit; I personally would not use regular MM in that hole. Clay soil with a hole dug into like you are describing can end up being like an underground clay pot. When you put an artificial soil mix into the hole there is a fair chance it will get root bound just as if you were planting in a pot. If I were planting that tree in clay soil I would still make a mix but would replace the peat with the soil that comes from the hole (1/3), coarse sand for the vermiculite (1/3), and compost (1/3). My understanding is that this will give your tree a better chance to develop a strong root system that will penetrate the clay.

It also seems like a good idea to under plant with deep-rooted vegetation like alfalfa and fava beans though this may not be practical for your landscape design.

How far down is your hard pan?

thanks for the suggestion....still learning. I will try that. As for how did is my hard pan???? not really sure. I guess a few more things i need to figure out.

Thanks for the replies. It's a Black Satin Thornless blackberry, semi-erect. Perhaps I should plant it in a container just to make sure it doesn't become invasive. And maybe put MM in the container.

As for the container trees (mandarin and jujube), still not sure what soil mix to use. Maybe MM with extra compost.

I've never grown either of those trees casey. My experience is with Meyer Lemons. You can use regular MM. I put a layer of compost + over the soil of my trees in the spring. I currently have a two cherries (one pie one multi-sweet) two pears (one multi and an Orcus) and a small bay laurel. I lost all my lemon trees when we moved to the city. There was a late snow that took me by surprise. They did not survive after years of babying them at our mountain home.

The reason you will not need to use extra compost (in my seldom humble opinion) is two-fold. First you do not want to make weak wood from too fast of growth. Second, every three years they need to be removed from the pot, given a root trim (to encourage feeder roots instead of the big kind that hold a tall tree steady) and repotted in fresh mix. If anything, I would personally go easy on the compost. I put worms into my tree pots. The worms keep the soil from compacting. My philosophy is to keep the worm environment happy and they will keep the tree healthy. My compost feeding is for the worms who than turn it into something useful for the tree. I want the moisture level in the pot to be good for the worms, don't drown them, don't turn them into dehydrated mummies, just keep them happy and in turn they will keep the tree happy.

It is ok to use potting soil (no Mirical Grow please! the worms don't like to eat Frankenstein chow) or MM in a container. What I wrote about clay soil was directed to someone who wanted her plant to eventually grow into the clay. You don't want that in a pot. I hope that makes some kind of sense.

Debs....thinking she should ask for another lemon tree for her birthday

ander217 wrote:When reading blackberry posts, remember that blackberries in the south and midwest mean a plant this is very different from those grown in the PNW. I'm not sure which kind you have in California, but here, blackberries grow on a cane and can be managed by pruning. As I understand it, blackberries in the PNW are an invasive vine. (Someone please correct me if that's wrong.)

A blackberry vine or bramble is very invasive. I live in FL and had one in my backyard as a child. After 10 yrs or so, it had taken over a quarter of our backyard. My mom didn't prune or anything, she wanted the blackberries. I recently bought two Ouachita thornless blackberry plants. They are thornless, grow on upright canes and are pretty easily contained. I planted mine right into the soil, they are pretty hardy and it freezes here only a handful of days in the winter. The new hybrid blackberries won't produce as much as wild vine types, but they are very hardy and easy to contain. I still wouldn't want one in my box, I think they would get too big. 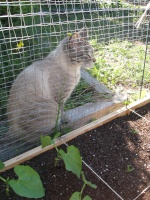 I'm expecting a delivery today of my pots and planting mix for my fruit trees. My yard holds water, so I have to plant mine in containers. I imagine MM would be way, WAY too loose for a tree, which probably wouldn't be able to support itself in the stuff if the wind happened to blow.

I bought 6 45-gallon containers. The obviously very knowledgeable man there at the nursery (who has a very large collection of his own container-grown fruit trees) told me how to pot them. He said he pots his in a 1:1 mix of garden soil and pine mulch (both of which they sell in bulk). He told me the mulch keeps the soil broken up and aerated, and slowly breaks down and feeds the trees.

I was relieved, because the less-knowledgeable lady I had spoken with beforehand said I should pot them in some very expensive mix they sold!

He told me to use root stimulator (properly diluted) when I planted them, then again at half strength two weeks later, to help lessen the shock. I also bought some fertilizer, since the mulch isn't going to be feeding the trees right away.

As for blackberries... they are growing wild all through our ligustrum hedge and azaleas. I need to figure out how to clean out the neglected yard without killing the blackberries.

I'm ordering some fruit trees this week and although I have more space, I'm going to plant dwarfs so I can pick my cherries and apples without a cherry picker! Here is a website I found useful. They sell in CA but they have a lot of info on pruning to keep size down and also give guidelines on how close you can actually plant fruit trees (18-24" apart according to them).

One thing to remember with thornless blackberries is they are a hybrid. Any of the berrys that fall to the ground can sprout new vines and these will not be thornless. My dad had a thornless growing on our fence when I was a kid but we had several that came up from seed and they were covered with thorns. If you plant it in the ground and some start coming up from seed I would cut them off.