I am sort of doing both...I went and bought a new shop light and am waiting on my bulbs and browsed Burpee and bought http://www.burpee.com/vegetables/tomatoes/tomato-collection-hall-of-fame-prod001735.html I am SOOOOO excited to get these PLUS start the Dixie Sweets as well as plan my 3 sister box....I am on the fence about start my corn indoors I have heard conflicting reports....we have a short season so I would like to have a head start...I am just so excited that the season is almost here I all but floated through Lowes hehehe I could go on forever

ok heres one i may need advice,comment's,i told ya so's on this idea

my back sidewalk runs east to west hence the delemma,heres what i came up with as far as planting and where

EDIT;; SORRY NO PIC I CANT GET THE ONE FROM PAINT TO DOWNLOAD

this may end up amounting to didly

but theres only one way ta find out

I gotta say, I don't understand your picture, boog. (Bearing in mind, I may the village idiot over in these parts.)

auntij,
That sounds like a great assortment of tomatoes. I like the idea of buying plants when there's no other alternative.

I bought 3 Oregon Spring toms last spring from Territorial Seeds.
They, too, sell and mail several crops as seedlings, including herbs. I wanted to try a tomato that was safe to transplant a month before last frost since I had none ready that early.
They were transplanted and they stayed alive and well, but growth slowed to a minimum during the cold days and nites. As for flavor, I have to admit they weren't very tasty, but it was nice having those early toms instead of buying from the market and all my others were just blossoming. I actually had a cherry tomato I started in my A-frame give me fruits about the same time and it didn't get planted til a month later but was protected well in the A-frame. Cold slows down growth.
I know you'll enjoy your lovely assortment of toms.
I, too, have some Dixie Sweet Heirloom seeds I'm eager to try this year.

boog,
I can't quite figure your plan either so I'll just say plant your peas and toms on the north side of your box.
Cauliflower and broccoli and pepper can get quite tall so those would be next.
Keep all the shorter crops toward the south end. They don't differ too much in size so any plan would work for them.
Good luck. 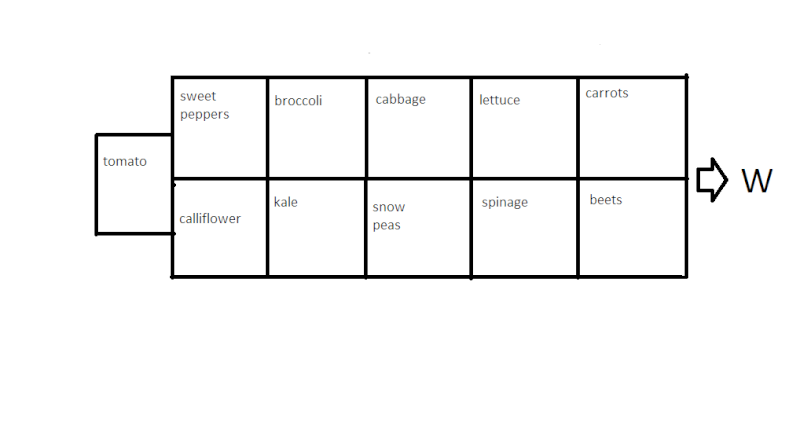 If it was my decision to make, I would put the cauliflower to the south and peppers to the north. Otherwise it looks good.

Yes, it was pretty darn funny, and I am VERY glad there were no witnesses! (Megan vs. 20 feet of rampicante vine and a good helping of pole beans into the mix....)

Boog, my one comment is that you may want to put something between the tomatoes and the peppers. I had tomatoes adjacent my peppers last year, and they competed a bit. (The tomatoes won.)

I was poking around outside this afternoon. One of my fall pansies, thought dead, is blooming!! (Please pardon the weeds.) And I can see signs of life from the salvia, too. 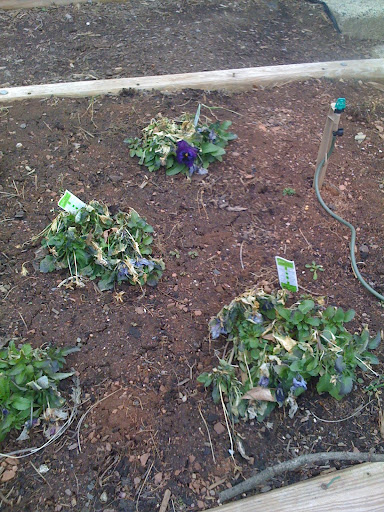 oh Megan, those pansies will perk right up soon.

For a little bit anyway... that bed is destined for milkweed and celosia, if I have my way! (Plus some onions lingering from last year.)

Speaking of pansies, anyone ever had a primrose overwinter? Those things are rather pretty, too.

My mother kept primroses in Washington state, up in the islands, and they were quite hardy.

@Megan wrote:My mother kept primroses in Washington state, up in the islands, and they were quite hardy.


I've always heard they are hardy. And, I think they are quite popular across the pond. And, I just figured if pansies made it through, primroses would, too.

I planted primroses a couple years back in between my daffodils, hyacinths, and azalea bushes. They looked amazing until the weather warmed up a touch. I was trying a dual-season thing with primrose/pansy and then impatiens. However, the primroses lasted so long, I couldn't get the impatiens in without ripping the primroses out. Indirectly, what is worrying me between my lettuces, broccoli and incoming beans.

@BackyardBirdGardner wrote:I was trying a dual-season thing with primrose/pansy and then impatiens. However, the primroses lasted so long, I couldn't get the impatiens in without ripping the primroses out. Indirectly, what is worrying me between my lettuces, broccoli and incoming beans.

I've always thought of primroses as a cool weather plant, but then again, I only saw them grown in a cool climate.

My experience last year was that the lettuce lasted quite a while. I grew a mesclun mix, and it seemed that just one of the varieties (and I'm not sure which) was a veritable magnet for flea beetles, though. I didn't stagger my plantings of my three lettuce squares enough, so they came to maturity all at the same time pretty much. I managed cut and come again for a while; longer, in fact, than I expected. Even when they were starting to bolt I didn't find them too bitter. But eventually I ripped them out and moved on.

I haven't grown broccoli yet, just broccoli raab, which is a wonderful spring crop. (A local friend told me they had trouble with actual broccoli so I decided to sidestep the pain.)

My pole beans were sprouted but small by mid-May, according to my notes last year. I thought I'd lost time but turns out I had PLENTY of time with them.

i'm gonna have fun ta work in the morning

@BackyardBirdGardner wrote:Speaking of pansies, anyone ever had a primrose overwinter? Those things are rather pretty, too.

I have primrose that I planted in the ground in 2004 then moved to a pot in 2005 and they are still growing strong. They only bloom in the cooler weather, but the plants stay green all year. Sorry it is much too dark, rainy and windy, to try to go outside and get a photo.

We have moved them from zone 7A in the valley in Oregon to 8B or 9 A on the coast of Oregon. We did up pot them to a larger pot last year.

Same storm system, but we got snow instead if ice (thankfully!). What started out as a Winter Storm Watch for 4-8 inches ended up as a Blizzard Warning for 8-16 inches. Supposedly the Blizzard Warning is over, but it is still snowing and the Interstate is closed the entire North-South length of the state. I wish you success getting to work and will be thinking of you while I am plowing through the streets on my way to work as well!