March Avatar: Spring Will Be Here Soon -- Promise! (click this)
Welcome to the Official SFG Forum
!!! Happy Gardening in 2021 !!!
Search
Latest topics
» The SFG Journey- SQUASH STINK BUGS **SECRET** HOW TO CONTROL
by has55 Today at 4:01 pm

This is the rootball of a Brandywine tomato plant that was grown in an 18 inch deep container. 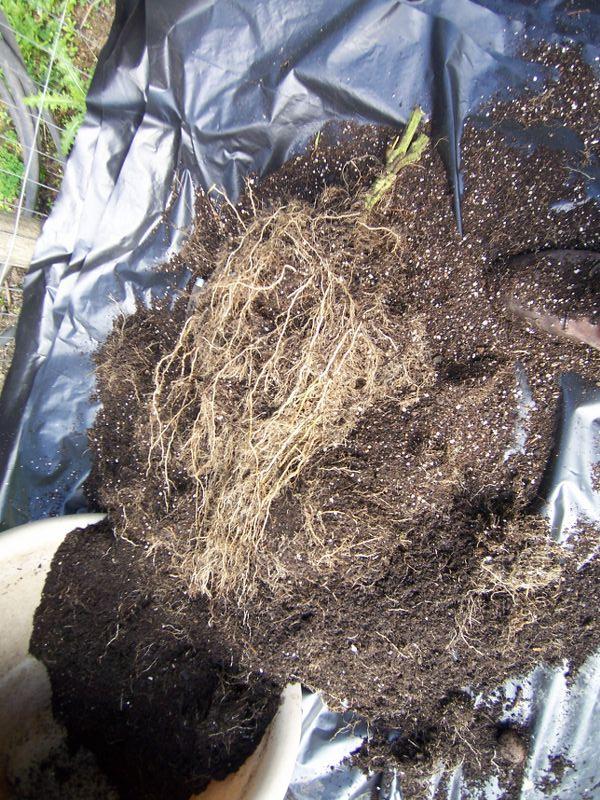 The rootball on the left is a Brandywine tomato plant grown in a 6 inch deep sfg box. 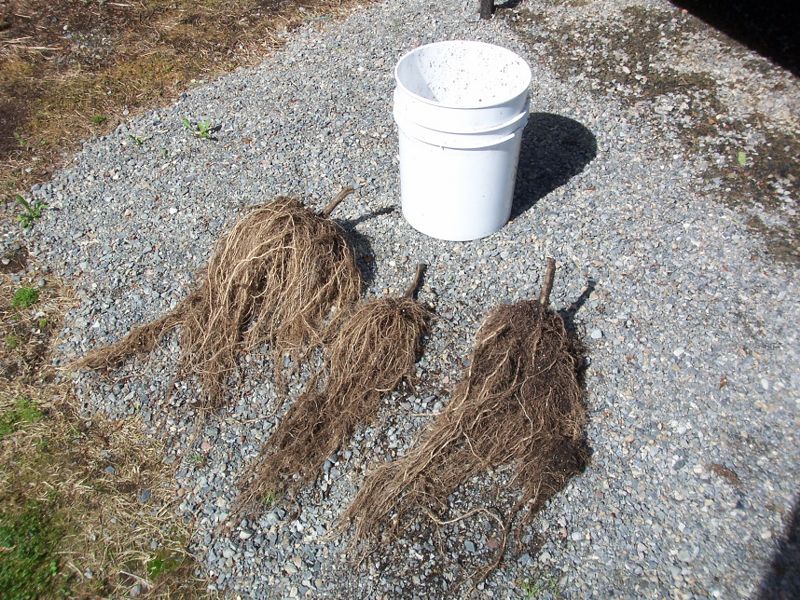 The other two rootballs were different types of tomatoes grown in the same box; they were planted one per square, right next to each other.

Although I do understand that six inches might not be enough for watering purposes in the hottest climates, I don't understand why the disbelievers can't get it-six inches works.

Boffer, I remember you said you were going to take pictures of your tomato roots, glad you remembered!

I have 22 tomato plants (pulled 2 early that were not true to type) -- all growing in 6" of soil. They all are still growing and have tomatoes ripening. The Opalka heirlooms are 7-foot and have no where to go. I clipped the tops off so the energy would go to the fruit, but the suckers near the top keep going. It's kind of interesting to see how far they'll go before it frosts!

Granted this hot weather we're having here in WV this September is unusual (95 degrees today!), but I know 6" of soil (really less) works. We did mulch heavily with straw this year, which I think really helped retain water better. We are having drought conditions now and the lawn grass is dead, but the SFG shines like an oasis amongst the brown.

We have people stop by to look at our garden often and they don't believe me when I tell them everything is growing on top the ground in those 6" boxes. All the farmers around have long since plowed under their gardens, but I'm still canning!

And these are Brandywine roots that had free/unlimited water while growing in my 6 inch deep sfg wicking box. (read about the wicking box here.)

The tomato plants in the wicking box had the smallest root structures, yet had more fruit than my other plants. 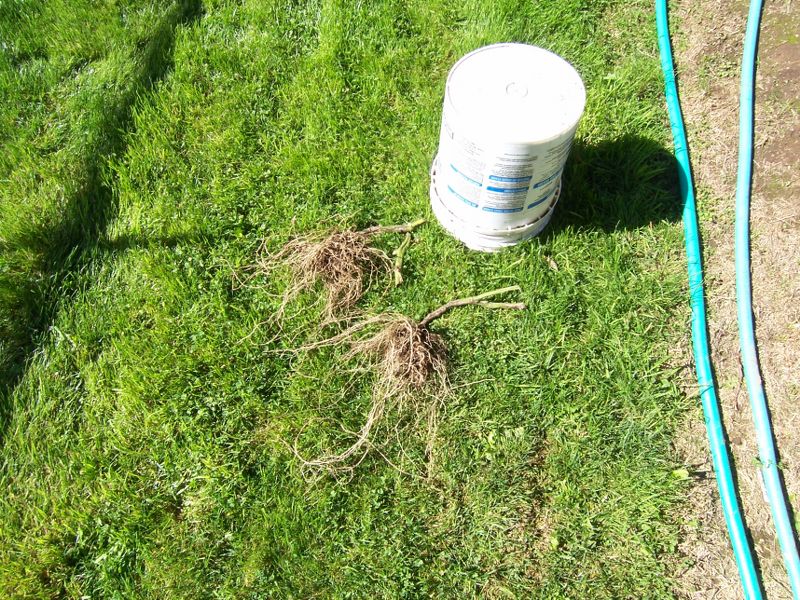 boffer,
Here's picture of the roots from some of my tomato plants this year (just pulled them up yesterday). All were grown in 6" of soil (really slightly less than that). The four on the left are the Opalka heirloom paste tomatoes, and on the right are four of the WV '63's all purpose heirloom. I did not dig around to get all the root because I have lettuce and spinach growing in the same boxes (2 x 8 square ft boxes). Because of drought conditions this summer I did mulch heavily with straw, but this is typically the way the roots look with or without mulch. They grow smaller roots mostly in their own square and then send out the big tap root wherever it can find room. I notice that the Opalkas have more little roots. They are thin stemmed wispy-like vines -- which were about 10 feet+ tall! 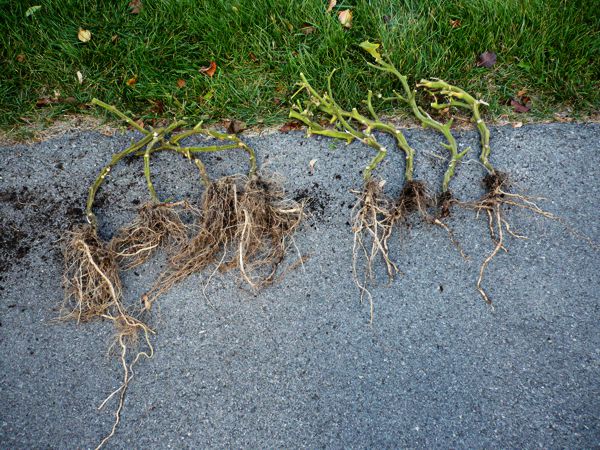 Thanks, Patti. And unlike me, you had a tomato harvest worth bragging about!

Thanks, boffer and pattipan, for such interesting posts.

It is sooooo wonderful to read about bountiful harvests and canning.

It gives me something to look forward to next year.

If only I could convince the deer to go eat at someone else's buffet..I mean.. garden!

LOL We've got some raised beds that we put up temporary, make-shift fences around every summer to keep the deer out. We've decided to put up a permanent fence by next year, but get this: My wife said: "I want to put up the fence, but I think we should plant some stuff outside the fence for the deer!"

I think I was pretty red in the face when I said to her: "blankety blank the deer-we've got five acres for them to graze on!"

@boffer wrote:My wife said: "I want to put up the fence, but I think we should plant some stuff outside the fence for the deer!"

I think your wife and I would get along well boffer! I would be thinking the same thing if I had deer coming into my backyard and I was trying to protect my garden. You could always just plant them some lettuce or something. What do deer like to eat?


Deer like anything that you would plant in your square foot garden! The only thing I've not seen them eat is rhubarb and Swiss Chard.

Just Monday of this week, I forgot and left the deer netting open on one entrance to my raised garden. Wednesday, 3 broccoli, 1 cauliflower, and most of my green tomatoes are gone. The sugar snap peas had just started to produce a fall crop and they were eaten to the ground. The deer seem to love the wildlife buffet they think we set out for them.

Roses!! Fortunately, I live in town and don't have a problem with deer but people here who live on a green belt, often have trouble with deer eating their roses.

We planted nine tomatoes 1 foot apart in a 1' x 8' x 8" box of MM. I eventually lost five of my tomatoes to the usual summer nasties, but four are still alive - one each Sweet 100 cherry, Rutgers, Italian plum, and Big Boy. (Hmmm, all are hybrids - maybe I should rethink the whole heirloom thing.) We made a newbie mistake in the beginning and didn't water enough when we filled the box, so the MM has shrunk down to nearly half the depth of the box.

The Rutgers and plum tomatoes are barely holding on but still have a few fruits ripening. However, even though we topped our Sweet 100 and Big Boy plants a few weeks ago, they have been growing laterally since we stopped pruning them in late summer. Those two indeterminate tomatoes have now spread to take up 8 feet of trellis width and are loaded with tomatoes. And all that from what could be no more than a 4-5 inch depth of MM at the most.

Here are photos I took today of the tomatoes. 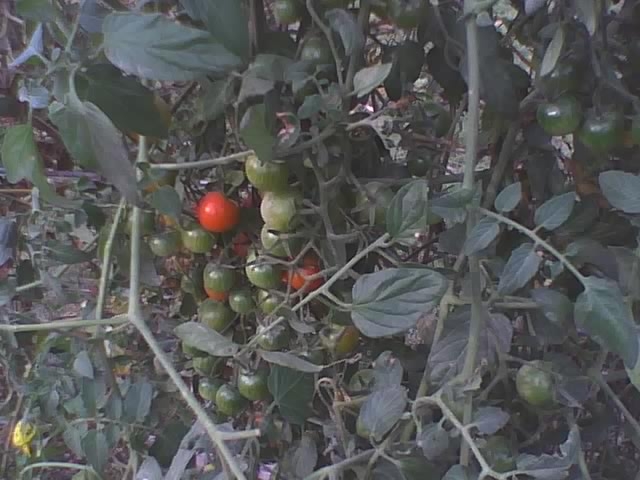 Here is one of the whole Sweet 100 plant. The Big Boy is on the left. 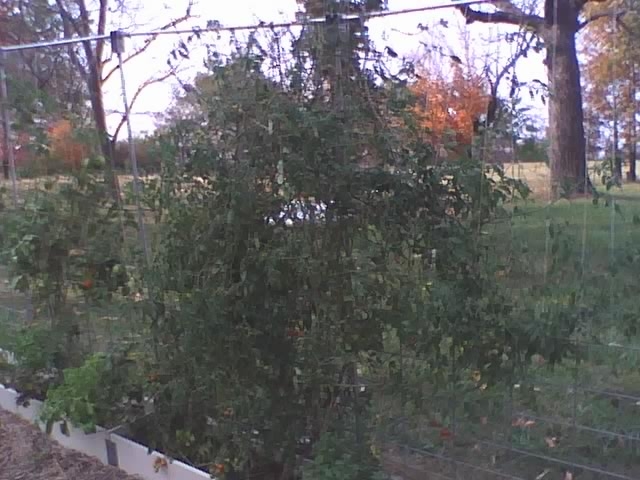 Here is a photo of the Big Boy plant. It isn't as healthy, but it is loaded with tomatoes. 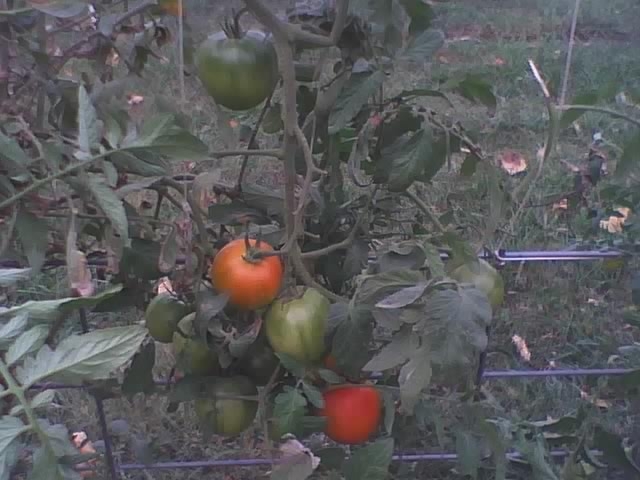 I pulled up some of my tomatoes that were still producing so that I can move trellises and get ready to replant. This bed is a little deeper, maybe 10 inches with a bunch of layers of papers, cardboard and Paoerwoven feed sacks on the bottom. I am sure the feed sacks at least are still intact as I took apart another bed with them on the bottom and there was no sign of them decomposing yet.

Anyway all these roots were in the top few inches, laid out like they were in the bed. The side of the bed would have been on the left and the roots went at least 2 foot in one direction and over 3 foot in the other(this is in a 4x8 bed). The square is made of 1 foot rulers to show the size. These were planted one per square on on a west side trellis and this plant was between 2 other toms with similiar roots, except I had to cut some of the other roots so as not to disturb my garlic. 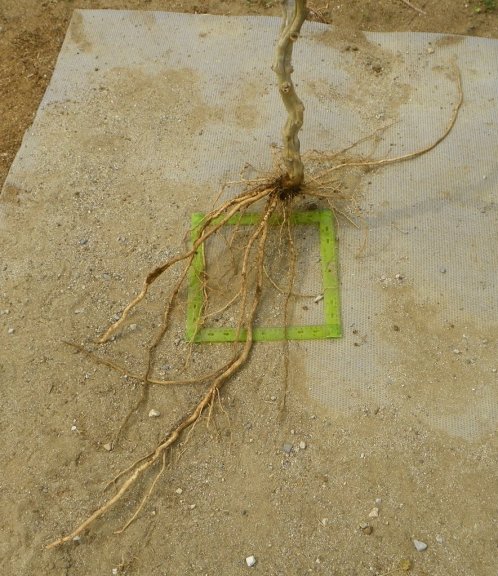 Real evidence for it shows to all just how shallow tomatoes can successfuly grow in Mel's beds , providing the nutrients and watering are correct .

YAY! That's what mine looked like too, but I wasn't smart enough to get a picture especially with rulers for a size guide!