May Avatar: Not Just Veggies! (click this)
Welcome to the Official SFG Forum
!!! Happy Gardening in 2020 !!!
Search
Latest topics
» Looking for an exotic pepper
by bgardner Yesterday at 11:47 pm

» mega-sized SFG?
by OhioGardener Yesterday at 7:48 am

» Happy Birthday!!
by AtlantaMarie Yesterday at 6:22 am

» How to: Care for your garden in the winter
by dalepres Yesterday at 2:22 am

I recently elevated my beds and omitted the hardware wire..
With 3/4" flooring along with 15 inches off the ground I'm not at all concerned
about anything coming up from under.. I did apply a good quality weed barrier and that was just to keep the mix in 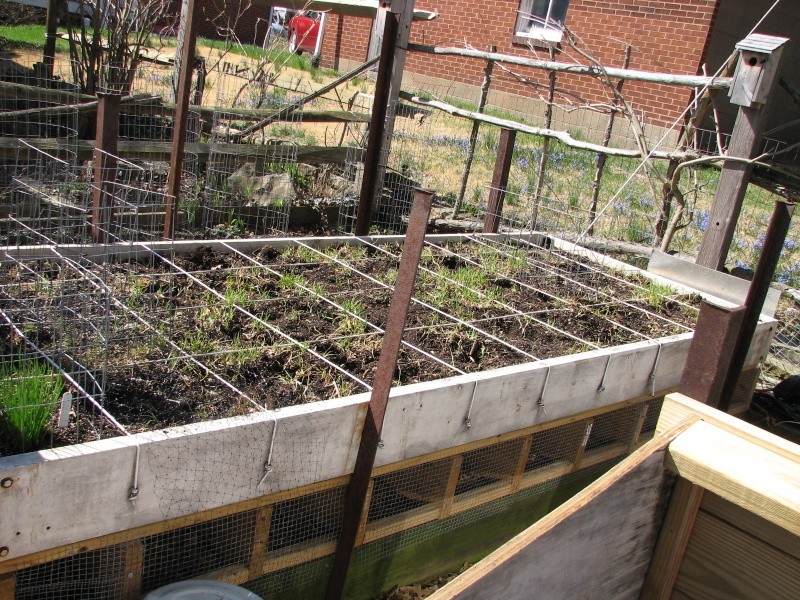 @ralitaco wrote:...what method you find works best to secure the Hardware cloth to the wood. (staples, screws w/ washers) Also how far apart do you space them?
In the above picture I see it wraps up on the outside of the box...any structural reason for this as opposed to having it on the inside?...

That's my neighbor's box, and it's still functional after 5 years.  The wire is on the outside just because it was easier to install.  I think he used Romex staples.  I use galvanized wire fence staples or screws/washers spaced every 6-8 inches

@ralitaco wrote:...do you keep it at that height for the entire length of the box thereby allowing the eventual sag to be somewhat hidden by the sides?...

It will sag some regardless, but the foam board reduces it.

@ralitaco wrote:...Which foam board do you use? Is it the Blue stuff? Does it prevent any of the sagging? Do you cover it with plastic? How long has it lasted?...

I've used the white, foil-faced white, pink, and blue.  It was a matter of what I had on hand, or if I had to buy, what was cheapest.  Don't use foil-faced; the foil kinda disintegrates.  Even though they cost a bit more, the pink and blue don't make nearly the mess while cutting that the white does.  The sharper your cutting tool, the less the mess.  I don't use plastic or weedcloth liners with the foam.  After the box is built, I take a screwdriver and randomly poke holes in the foam for drainage.

My oldest box with foam is 6 years; no deterioration at all.  I'd recommend using at least 2x8's or stacked 2x4's to regain the depth lost to the foam board.  Especially if you foresee the use of mulch in your gardening.

I know plywood is convenient and easy, and folks sound cavalier about replacing it when it rots out.  But I have over 20 boxes off the ground, and the thought of replacing all those bottoms is enough to make me give up gardening!

Plywood, in general, doesn't fare well in my climate.  I did do one experiment with a plywood bottom and setting the box on cinder blocks to get it off the ground.  Here's what the plywood looks like after 3 years. 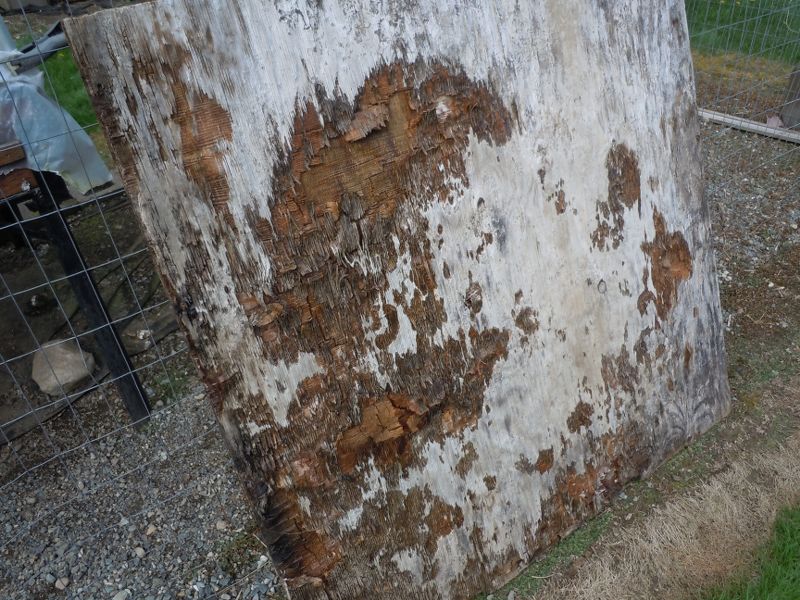 It's rotted through the middle ply. 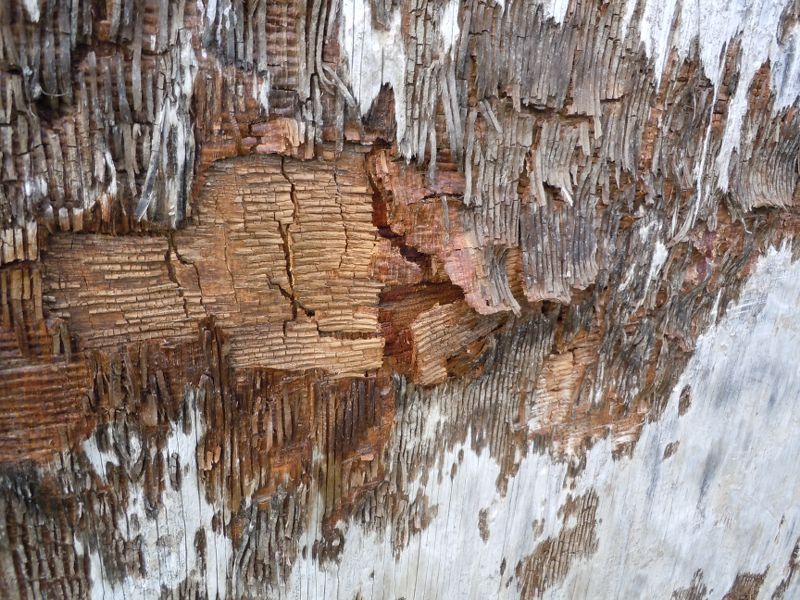 @boffer wrote:See how the weight of the box sits on top of the post; this way nails and screws aren't carrying the weight.   Each corner should have knee braces on it.  Another plus, the 4x4 takes up less space inside the box. 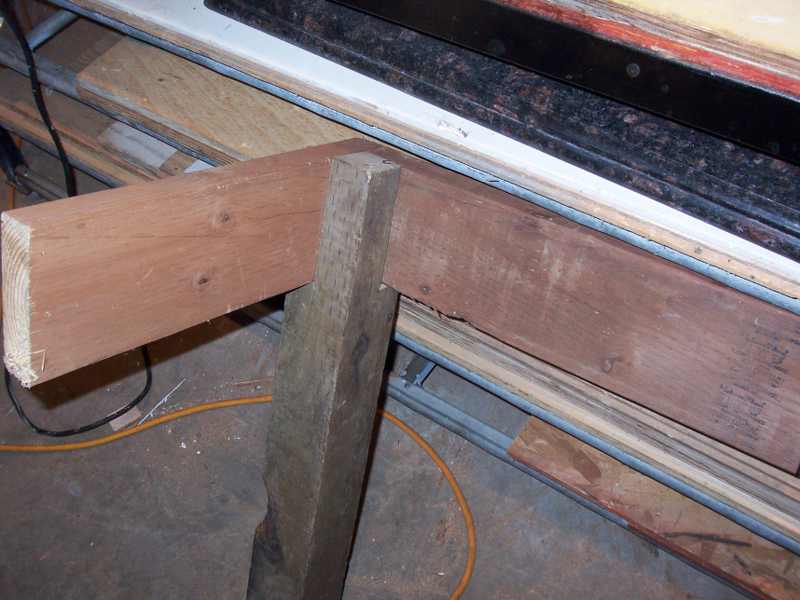 These two methods of attaching posts are simple to do, and I feel comfortable recommending them because I know they will hold the weight.

This is essentially how I built my box. How do you attach the plywood to that frame? Or do you install joists and build a box to sit on top of that set up like you did with the metal below.

In other words is the picture above demonstating how to build the box or how to build a table for the box to sit on? I think the answer to that question will really clear things up in my mind. 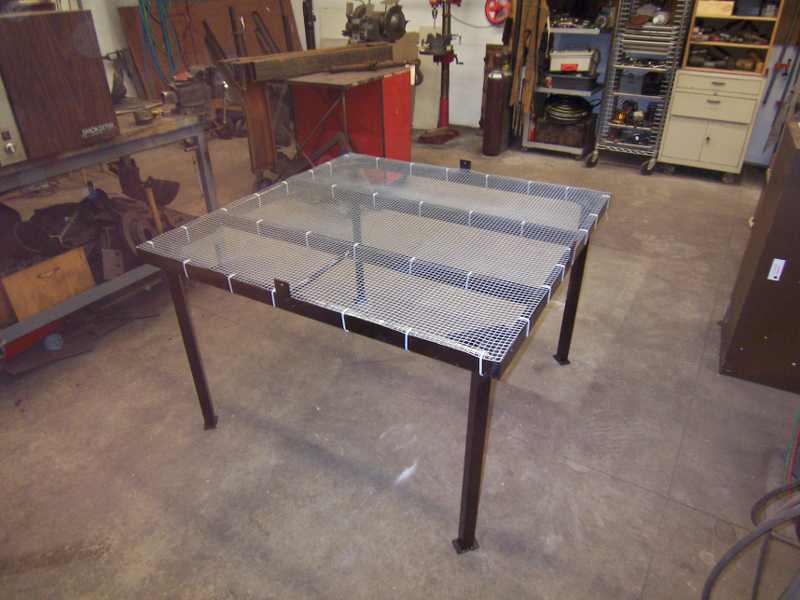 Here it is with a box on it.  I have plywood on this box because I'm using it for an experiment this summer.  At the end of the season, I'll take the plywood off and just use the welded wire that I already put on the frame.  (I'll lose the zip ties then, too) 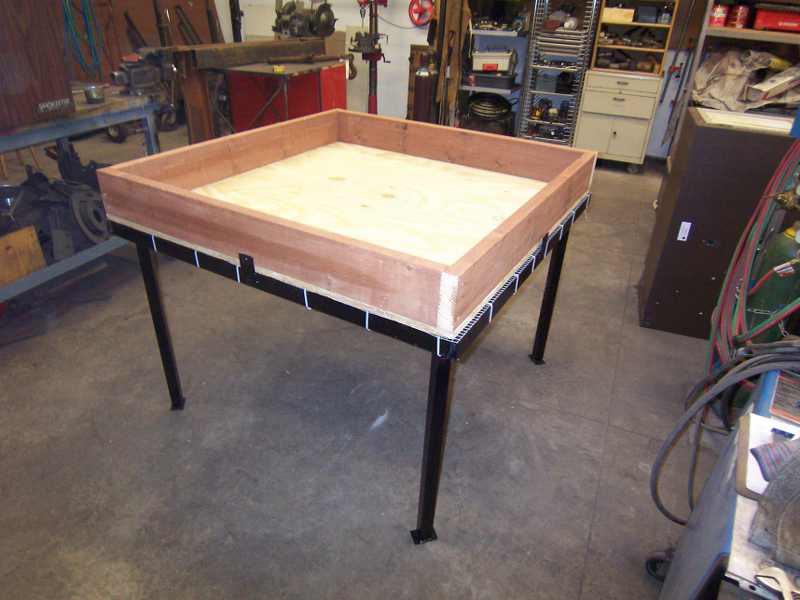 (See here to get an idea about the amount of weight we're dealing with.)

I'd notch the plywood corners to fit around the posts.  Then I'd use 1/4x2 or 2½ galvie lags spaced 6-8 inches around the plywood perimeter to attach it to the 2x frame.

Then I'd sit in the middle of box and ask my wife if she could live with the little bit of sagging that she saw!

My wife's not that picky, but if she was, and didn't like a little sag, I'd put a stiffener in.  A piece of old bed frame (angle iron) laid across the middle inside the box, fastened every 5-6 inches with nuts and bolts.  It would be out of sight and not take up any space to speak of.

@boffer wrote:I'd notch the plywood corners to fit around the posts.  Then I'd use 1/4x2 or 2½ galvie lags spaced 6-8 inches around the plywood perimeter to attach it to the 2x frame.

Then I'd sit in the middle of box and ask my wife if she could live with the little bit of sagging that she saw!

I installed a ledge all the way around with outdoor deck screws spaced about 8" apart. 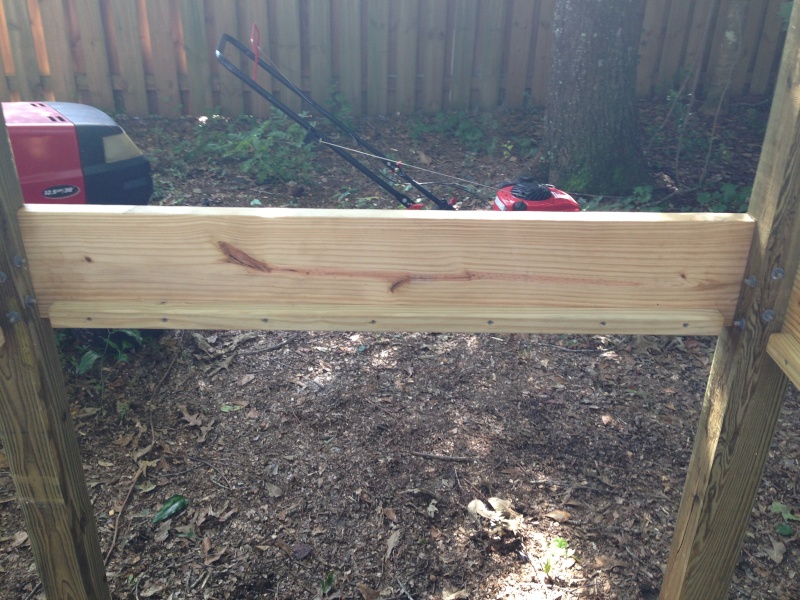 With the plywood supported ONLY by those ledges, I filled the box with MM and completely saturated it. I saw no sagging of the plywood. 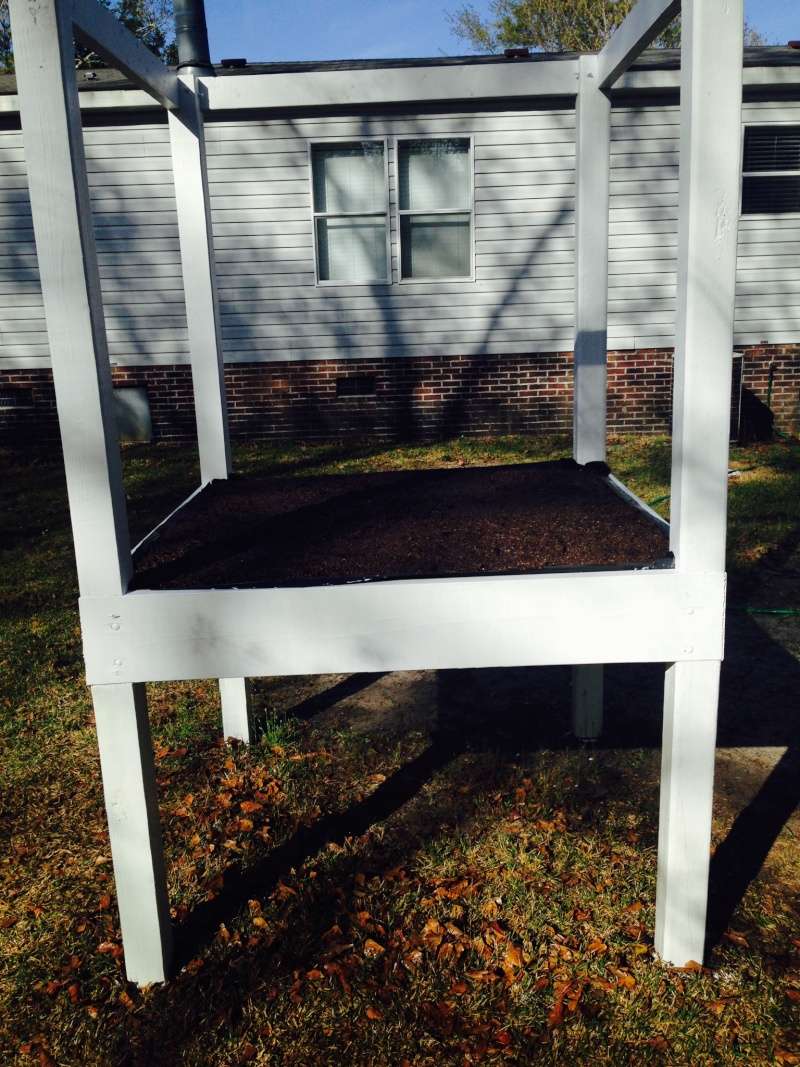 If the plywood would not rot and I didn't read in one of the threads about needing support every 2', I would not worry about it. However, since I saw your photo of the rotted plywood and the underside would be the last to show signs of rot,  I felt like I needed something under it to support it in the event it rots through.

And thanks to your FANTASTIC test I think I am going to put 2 pieces of conduit under the plywood. I believe I can do that with the least amount of trouble and expense. When it comes time to replace the plywood, I will look at doing something different. Also, if after some time I don't think the conduit is going to work, I could notch out the 4x4's some more and put in a 2x4 "table" for the plywood to rest on.

Almost forgot, I am going to screw the plywood into the ledges too. I found a Sag Calculator and there seemed to be a big difference if the "shelf" is Fixed or Floating.

Anyway, thanks for your help as always.

@jimmy cee wrote:I recently elevated my beds and omitted the hardware wire..
With 3/4" flooring along with 15 inches off the ground I'm not at all concerned
about anything coming up from under.. I did apply a good quality weed barrier and that was just to keep the mix in

It looks like you have 2x6's spaced every foot supporting the plywood, is that correct?

I wanted to comment on height of table tops but it would have highjacked the topic is was reading earlier.  I don't remember what the title of the post was, though!  Everyone has been so active today that the Latest Topics I read earlier (in blue) have already rolled off my screen!

The top of my tallest TT is 24" which looks really nice but is not really comfortable when planting,even for this 5'3" woman.  But, they look nice and the plants can get to 4' (6' from the ground) and still be comfortable for me to reach.  When the boxes were on the ground, I could reach plants 5 1/2' tall, and now for my "just off the ground" plants, I can reach those are 5' tall.

My point being, I don't think there is a perfect height for backs and for knees and for keeping us older folks off ladders.  It is a personal preference as to which is the most important need for the individual. If I had a real garden area, I would have boxes at different heights for different types of plants. But, never on the surface because of invasive roots.

@ralitaco wrote:[quote
It looks like you have 2x6's spaced every foot supporting the plywood, is that correct? 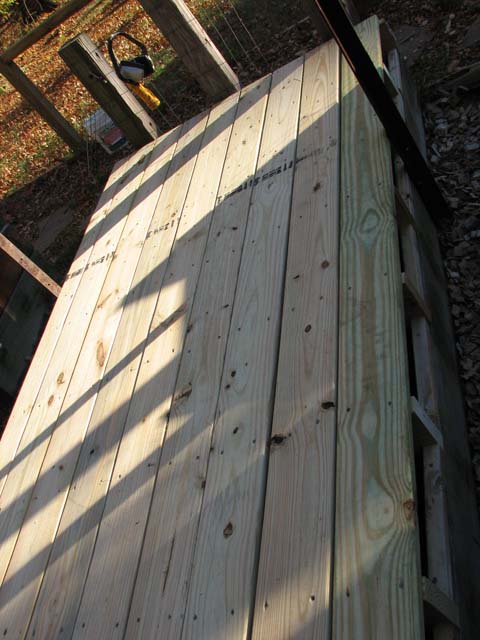 @sanderson wrote:I wanted to comment on height of table tops but it would have highjacked the topic is was reading earlier.  I don't remember what the title of the post was, though!  Everyone has been so active today that the Latest Topics I read earlier (in blue) have already rolled off my screen!

I believe that was in this thread: How Long Does MM Last
PS1914 was talking about elevating her beds and I made this comment about the height:

@ralitaco wrote:One last thing...the height of the bed can vary, the one I have is about waist high (I will measure later) and I think it is maybe 6" too high. I am thinking about cutting down the legs at some future time.
I know Sanderson has some that are about 4-6" off the ground.

@boffer wrote:We haven't talked about the height of TTs in a while.

I have found that 36-38 inches is my preference.  I made a couple boxes at 28-30 inches thinking it would be a better height for taller plants like broccoli.  But I didn't like that height afterall, and after a couple years I raised them.

I also increased the depth  of a couple boxes that were at 36 inches, so they ended up at 42 high.  That's too high for me; I found that I would be stretching and reaching for an inner square, and my body would crush the plants in the squares that I was reaching over.  One of these years, I'm going to take a hack saw to those legs!

I have some boxes in my greenhouse that are raised about 6 inches off the ground.  That's a good height for veggies that get planted one per square like tomatoes or broccoli.  It's not a good height for veggies like carrots and beets that have many planted per square and then need to be thinned.  I imagine somebody with healthy knees would find 6 inches off the ground easy to manage for all their veggies.