May Avatar: Not Just Veggies! (click this)
Welcome to the Official SFG Forum
!!! Happy Gardening in 2020 !!!
Search
Latest topics
» SFG Journey: Memorial Day
by has55 Today at 4:36 am

» what do you put in the compost that other may not of thought of?
by Jazzlover Today at 2:08 am

» Can you continuously add material to a pile that is composting?
by mollyhespra Yesterday at 10:08 pm

» Cheerleaders needed, please. This is daunting.
by mollyhespra Yesterday at 9:30 pm

» Eddie Willers 1st rookie mistake, what to do?
by Scorpio Rising Yesterday at 9:01 pm

» What Have You Picked From Your Garden Today
by OhioGardener Yesterday at 10:34 am

Has anyone ever used tea bags for starting seeds?  Sounds like an interesting experiment that I haven't tried yet.

I'm going to try it.

Thanks for the discovery!

But it's definitely worth a try, and would solve my "radish starting" conundrum more easily than making my own peat pots. So here's tea "pot" one using a upcycled milk carton and 8 tea bags: 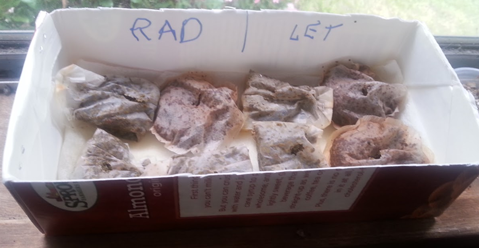 The teabag should be used first , is this correct?

@has55 wrote:The teabag  should be used  first , is this correct?

Yes, correct.  I started collecting them yesterday, one per day...

Since it really isn't specified in the link, does the variety of tea matter? Say an Orange Pekoe vs Chamomile. I do know and have seen research on the effects of caffeine on seed germination which at 1% in solution can reduce. I grew up in a time when you were given tea and toast when ill so don't know why but I seldom ever drink tea but do use Byron's Second Cupper (Orange Pekoe) made with a used bag as a seed soak for larger seeds, particularly peas and beans. I am trying to drink more herbal teas but again still that stigma. I did see a formula for using Chamomile Tea from a Canadian Nursery to use for watering seedlings to reduce the incidence of dampening off but still need to research before recommending. As Markqz mentioned, biodegradable bags do make a difference from what I read in the little research I did. I would also like to point out urine is sterile initially but left out suffers contamination much the same way a used tea bag would.

Sometimes cool-sounding ideas are posted on the internet, but you're not sure the people involved actually tried it.

Here's what the "contest" is looking like. The box on the end is growing Merveill lettuce in Mel's mix in home-made starter cells. They are bursting out of the gate. The four tea bags in the middle have Merveille also (unless I mixed up). Two of them may have actually started growing (you can't see it in the photo).

On the left, four radish seeds in tea bags have started.

My feeling is that there isn't enough "stuff" in your typical tea bag. It dries out too fast, and there's no depth for roots. Maybe if you stacked two bags it would work better. Maybe I'll try that for the next batch. Still, if it works for radishes that would be something, since there's no way it pencils out to purchase expensive peat pots or even disks when radish sells for 50c a bunch.