» Message from Sanderson
by yolos Today at 10:20 am

» Hello From Far Southwest Texas and Northwest Ohio
by AtlantaMarie Today at 7:29 am

» Questions about compost for Mel's Mix
by sanderson Yesterday at 11:33 pm

» Are these good for first mel's mix?
by sanderson Yesterday at 2:27 pm

» Is this enough variety for compost mix?
by sanderson Yesterday at 2:14 pm

I need to start prepping and freezing tomatoes, that will be canned when there is enough to drag out the equipment.

1. The first year I just used a submerged water bath and the seals are still good. Maybe 2014? Last year I pressure canned and they looked unappetizing, some solids at the top and lots of pinkish water. Can I go back to water bath? Maybe double the citric acid?

2. Last year I also peeled and cored the tomatoes. I did not squeeze out the jelly and seeds. Does anyone squeeze out the seeds and jelly? I want more tomato meat in the jars and less liquid, like my first year.

We always use hot water bath, and have had excellent results with it. We typically core the tomatoes, and then put them in the VitaMix to pulverize them. Then they are heated and canned with no water added.
____________________________
Never plant without a bucket of compost at your side.

With sauce, I just cut into big chunks, put in a pot with a little water, cover & steam for a while. Once cooked, I run through a food mill to get rid of seeds/skins, then crock-pot on low with the cover off till it's the consistency I want. Then either measure & dehydrate or water-bath can with a little lemon or citric acid. Seeds/skins get dehydrated & then powdered. I use the powder as a thickener.

(With the dh'd sauce, I measure into quantities I like, i.e. 2 cups. Then when I get ready to re-hydrate, I know how much water to add.)

Here's a link to the National Center for Home Food Preservation: https://nchfp.uga.edu/how/can3_tomato.html

They don't have anything specifically about diced, but it's the same instructions.... Under the Whole/Halved tomatoes, follow Tables 1 for water bath. Tables 2 & 3 are for pressure canning.

Sanderson, depending on what you are doing finally with the tomatoes, I think the variety of the tomato would dictate the quality somewhat of that which is being canned. Paste tomatoes by their nature have more meat, less seeds and liquid. Many beefsteaks become a mess with liquid dribbling down your chin when eaten fresh in the garden. I think you grow the variety that best suits your final intentions. I can say this the flavor changes as the tomato goes from fresh to processed. The soil that the variety is grown will alter its notes and productivity but not its physical characteristics.

Dan,  I have a long history (other folks remember my battle to get ANY tomatoes to grow successfully, including 2 years with leaf viruses) with my tomatoes and so I grow all types, including paste to cover my bets.  So, any tomatoes harvested are successes.  The one faithful variety is Snow Fairy.  Fine for salads but a little blandish.  I like acidic juice dribbling down my chin!

My varieties are : Snow Fairy, Rutgers, Cherokee Purple, Mortgage Lifter, Arkansas Traveler and San Marzanos as heirlooms and a Beefsteak and Sun Gold as hybrids. Summers reach 110*F and desert-dry and hot breezes.

AM,  Thank you for the link!

I am going to can 8 lbs today using a water bath.

Sanderson, now I am wondering did you try any of the varieties recommended by the California Extension Service? Part of the responsibilities of a land grant university is to develop varieties of fruits and vegetables that do well in their home state. I also look up what the commercial growers grow and they are have letters and numbers and not one cute varietal name. Here is the link and there is a link in this link to take you to the numerical alphabet varieties the commercial growers use. They are probably hard to come by unless you know a farmer/grower or you are in the market for a 50 lb. bag of tomato seeds.

This link showed a great way to transplant a leggy transplant where as I always would get the post hole digger out. I would have thought California would have more zones than the three they have listed.

Dan, Yes, I frequent the ucanr.edu web site. It was how I discovered my tomatoes had 2 different leaf-hopper transmitted "leaf curling" viruses. This paper clumped zones together to create 3 Mega regions for the purpose of the tomato study.

Due to California's geologic creation and ages, plus including Short- Medium- and Long-Day latitudes, it actually spans Zones 4B to 11. That is why CA is just a productive and important state for growing U.S. produce and other Ag activities.
____________________________

To get  bigger chunks of tomatoes . I filled a pressure canner with tomatoes them=n poured in a couple of kettles of boiling water & put the lid on & and let it go  cold over night by which time the skins on the toms were nice & wrinkly .

It was just a case of gently pull the wrinkle to break the skin & squeeze the flesh & seeds out into a stainless steel bucket stood in the kitchen sink ( keep the skins in the fridge  for later ) .  When all 56  pounds of tomatoes were skinned , the dish washer had hot cleaned a lot of jars and lids . I put the seals in a pan of just boiled water & put the lid on it .
I started fill the jars with whole toms but any bigger than a egg were  cut in half & slipped in the jars  and the glass Weck jar lid less the seal was put onto keep flies out of things .
Once I'd got 8  pint jars of toms like this full to with in an inch of the top ,I used a cup to taken out some of the juices innth bucket that had drained off the skinned toms .   Took  a quart and added a bit of salt & some lemon juice as per the Ball Blue book on canning , then used the juice to bring the fluid level to an inch from the top ,  took out air bubbles & added the softened seal , glass lid & securing clips then , used the canner to pressure can them . This gave  something akin  to a can of rough chopped  tomatoes .
Some toms were put through the food processor & well chopped up but you could still see the small chunks .. these came out after canning as a very liquid tomato  mush


Those skins
The skins were well whizzed in the food processor ( not the liquidizer )  with a plastic blade , it collects the skins on the blade and sheds the flesh in a way we'd not thought of , . the cold pulp was then put through a sieve to remove any bits of skin & seeds not cut to bits  .

The resultant pulp ,  some of the tomato juice &  several skinned tomatoes were then put in the liquidizer 7 turned to liquid then strained in a sieve to boil down to make the recipe for ketchup ( also pressure canned ) . It's lost a lot of colour despite being stored in a cool dark cupboard , some of the jars of ketchup have separated  to liquid & tomato sauce ... need to reduce it further before canning .. perhaps by 1/3  weight like you do when boiling fruit for jam

This year we hope to put whole skinned tomatoes in the jars and perhaps whizz up a couple of pounds of skinned toms to add as liquid .. we will still pressure can them in the  22 & 1/2 quart All American Canner as we know this safe way of canning is good for two & a half years storage

The beauty of tomatoes is you can freeze them in up to 10 pound bags , then can them in winter .

Once well thawed the skins can be pulled off easily & the flesh with seeds  pressure canned as they are . top up the filled csnning jars with defrosted juices to which lemon and a slt have been added

The remaining juices that escaped during the thawing in  containers  can be boiled to sterilize them then frozen for a soup base flavours in ice cube trays or poly bags etc.

Always follow a research-based recipe when canning. For tomatoes, I like the crushed tomato recipe from the National Center for Home Food Preservation.

UC Davis has put out a nice document including a chart of what can and cannot be steam canned. 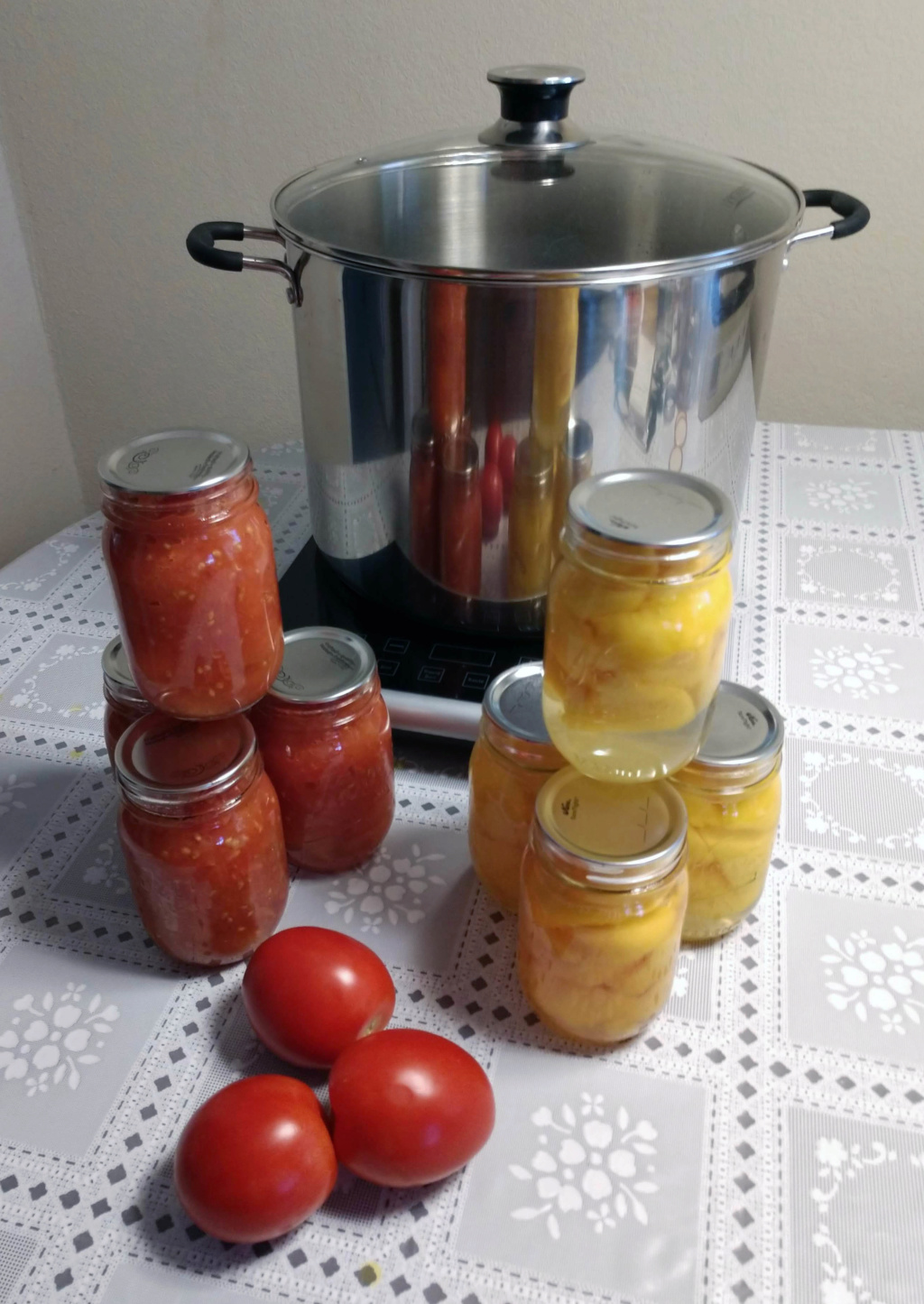 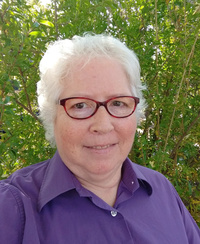 It would be much easier to buy a multi-use water bath/steam canner.

The Victorio has a gauge on top that lets you know when the steam has reached 212 degrees. That is the problem with trying to use the pressure canner for a steam canner or the older dome steamers without a gauge. You have to take the temp of the steam to make sure it is at 212 deg before starting the processing time (#7, pg 3, Guidelines for Safe Canning of Acid Foods in a Steam Canner). However, if you want to do a test run, use a water bath canner rack (the ones with the folding handles) inverted, in the bottom of the pressure canner, filled with water just to the top of the rack. Have the water at 140 or 180, depending on if you are doing a hot pack or raw pack, place the jars on the rack, lock the PC lid on and bring the water to a boil until you have a full stream of steam from the vent pipe. Use an instant read thermometer to check for 212 deg then start timing. You cannot remove the lid during processing. This releases all the heat. That is why you cannot process any high acid product that takes longer than 45 minutes. You risk running out of water.

I personally would not try using a PC as a steam canner and I don't guarantee that your product would be safe. That's too much of a risk for me. Be careful using an instant read thermometer, you don't want to burn yourself.