What building material? And how high?

What building material? And how high?

Background: I've read the book. I live in 7a/b (Atlanta, GA) on a small suburban lot. I've done a couple of 4x4 SFGs for the past few years to get the hang of it. One is a traditional 6-inch high-on-the-ground type. The other is 10 inches deep and waist high. *hopefully* by next year, I will have moved a gi-normous shed that is sitting right in all my full sun. SO, I hope to be able to plan well and get more garden in!!

My questions right now:
1) How high/deep can I make my boxes? My raised garden that is waist-high is one that we purchased and assembled (so it was $$). But I LOVE the height of it. I have back problems, and I love not having to kneel and bend. so I know that when I make a larger garden, I will need something higher than 6 inches. I"m wondering how high I can build on the ground (which is more expensive to fill). Versus buying more to-be-assembled raised beds which cost more, but require less filling.

2) IF I built them on the ground, what kind of building options do I have? Mine are done in Cedar. But I"ve seen cinder blocks, and a corrugated aluminum (for housing?). I want to explore my options, cost, and ease of use (as I will be the primary constructor....).

I"m excited to possibly be building in a big space next year!

EDITED: The approximate space I'll have if shed is moved is about 15'x25'. And, I"m totally open to doing a combination of on the ground and elevated beds (waist high). 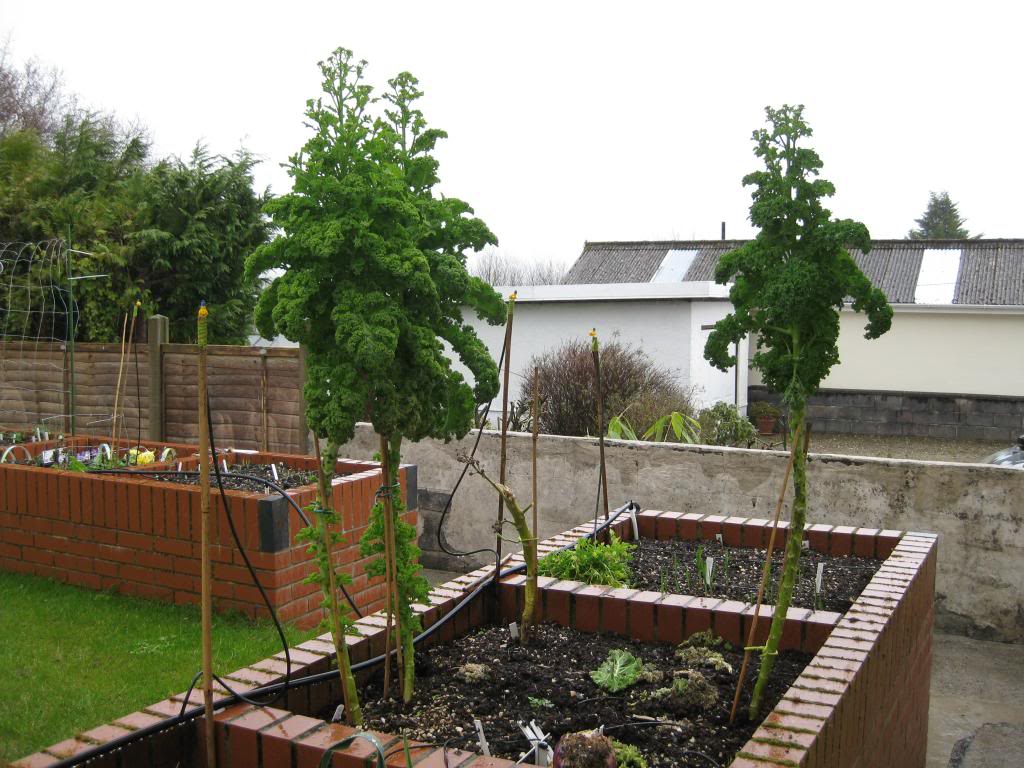 I too have various disabilities and ill health . This is my answer to rickety table top beds and having to rebuild them every five or six years .
They are now into their third year .picture taken a few days ago in May 2013 .
I have about 240 sq feet of such beds containing veg in the rear gardens and flowers on the frontage , because of the slope of my land there is a step of 15 inches or so . These beds help make the retaining walls as well as give me two heights I can work from . All the dividing walls are properly keyed in bricks for maximum cell strength ...no wire ties etc used .

Yes, these initiqally these beds were expensive when set against a simple wooden frame made of scrap wood . They should see me turn my toes up & migrate the the great ANSFG upon high or down below and then some .

These beds are 36 inches tall and obviously can be built to a far greater height.
They were constructed with a hole through the foundations and with weep holes at the first course of bricks for drainage .

Initially I had them filled with neat stable muck & straw which I wettted well every day and covered in a tarp to get it to sweat and drop down , then a week or so later filled level with the top with leaf mould and again watered heavily & recovered every day till it dropped down a foot or so .
I then added my MM to about 9 inches deep and when that had settled several months later topped the beds ( grew some crops mean time ) to the top where you see in the pictures with fresh MM .

One or two beds got a filling of 18 " of MM as I was experimenting , I got some fantastic long root crops and all the brasssica grew like trees . But that depth is not needed nor is the cost of it all wanted .


In my days of good health I built beds like a letter "T " or a tall mushroom for a disabled folks home at various heights so that those with wheel chairs could get the chairs tucked in under them . The upright bit caller the plinth being made of cast reinforced concrete with a central drain point , the top was also cast concrete , the wall was engineering bricks set in the wooden frame work that I cast the tops in , carefully mortared in place before the steel weld mesh reinforced concrete top was cast . The end of each brick was cut with a stepback of 1& 1/2 " so that it hid the supporting reinforced concrete lip
It might seem over the top but because of people needing to use the brick work as support in a public place it had to be nigh on bomb proof

To do it cheaper the walls could also be cast concrete if your able to get a truck with the mixer to direct pour them in place in your gardens .
That way a construct full foundation with steel work and make the casting mould around it them get it poured in one go and vibrated in.