» Patio Tomatoes at the Kitchen Door
by MacRadDoc Today at 9:18 am

» Mulch question
by MrBooker Today at 6:37 am

» CANADIAN REGION:What are you doing January to June 2021
by Kelejan Yesterday at 1:25 pm

I've got another question. Once all the stuff in my compost tumblers decomposes, do I need to buy 4 different kinds to go with it? I was thinking that that since I'm putting different things in there, it would cover all the bases of the five. Am I correct in my thinking?

That's what I would think too, b/c it is lots of different sources.

Personal opinion only. Since my compost pile is all vegetation, I plan to add one or two manure based composts to my homemade stuff. If I ever get a source of manure for my compost, I may chance it without the additions.

Obviously the more differing sources you compost the better balance of nutrients and trace elemnets in the final product.

...so if I get some manure and/or worm compost, I should be OK?

LeeAnne12, if all of the ingredients of your homegrown compost is vegetation, composted manure would be a good addition.

I would look at the compost you have, and add enough manure to make it 20% of your total compost. Mel says your individual ingredients should be no more than 20% of the total.
Hope that makes sense, it did in my head

Can I just say this about that....

My very first square foot garden was filled with mel's mix that was 1/3 peat, 1/3 vermiculite and 1/3 home-grown vegan compost. That box turned out to be the best box of all most all of the rest of my boxes.

In all fairness I obtained my bins from a wildlife rehabilitation place and they came with trace amounts of deer poo. I also put worms into the bins when they came up with the weeds (no worms were harmed in the making or harvesting of the mix....grin) I filled the bins with kitchen scraps, weeds from my herb garden and grass clippings. It was and is the best box of mix to date.

The next two boxes were filled with whatever combinations of 5 that I could get. Worm castings, chicken and beef poo, mushroom compost, local recycled compost and some from Whitney farms. I also included something called a 5 way soil conditioner in one of them. Neither of them was as lush and strong as my home-grown-only box. I have since done another box with homegrown (it takes a while to make) and yet another with 5 bags mixed compost. Once again the homegrown out preformed the commercial by a long shot.

I cringe when I read that peeps are using both bagged chicken and beef poo in one garden. Because of the diet fed to agro-business animals (from whom the majority of bagged poo comes from) they are full of salts and chemicals. The chemicals will not directly hurt your garden but I suspect it is the salts in the poo that makes a less lush box. Mushroom compost is full of chemicals AND is mainly peat. My favorite organic nursery no longer sells beef poo and are picky about where they get their chicken poo because (IN HIS OPINION) you might as well cut up your money and throw it into the garden for all the good it will do. (repeat....HIS OPINION)

I like 80 to 85% vegetation (kitchen scraps, clippings, mowings) in my compost with about 15 to 20% (if that much) vegetarian poo (vegetarian poo comes from bunnies, llamas and their kind, sheep, normal goats, and horses......chickens ARE NOT vegetarians, like bears they are omnivores).

My experience has been that things grow well in a box with 1/3 commercial compost made with 5 kinds or brands of bagged compost. But the best boxes are mixed with homegrown vegetarian compost. My commercial mix boxes are improving as home-grown is added.

Having chickens and soon to have bunnies, I am hard pressed to get enough no-poo compost into my bins. It is a year long process of adding grasses even as I cut down the amount of lawn space on my urban farm. I LOVE when someone has spoiled hay they need hauled off. We go to parks and rake-n-bag leaves in the fall before the maintenance guys can get them.

I do not in any way represent anything to do with SFG. I'm not even a master-gardener. If in doubt, take the advice of those already approved by the association. I am just saying what works best for me. (and hoping that you will not be afraid of your own compost)

I'm hoping that is the case with my own, since we've been composting for a number of years now. It's good to hear that someone else has had success with it already 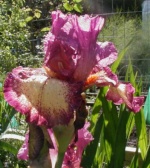