February Avatar: Time to Wake Up!!
Welcome to the Official SFG Forum
!!! Happy Gardening in 2022 !!!
Search
Latest topics
» Ads are back
by OhioGardener Today at 8:35 am

» Soaking Seeds for Better Germination
by OhioGardener Today at 8:30 am

» Should I buy this compost tumbler??
by sanderson Today at 3:38 am

If you knew absolutely zilch about canning (me and the wife), how would you go about learning? We'd like to use this year to experiment with it, then next year plant a lot more produce in order to store.

A couple years ago, we learned from the Ball Blue Book (makers of the jars, etc) that was $5.95. And, a thirty year old hardcover book from a garage sale. Plus, lot's of info on the net. We didn't know anybody to ask advice of, so it was all book learnin'.

Haven't poisoned ourselves yet!

This is not from Ball but you may want to try this link: http://www.uga.edu/nchfp/

Botulism can be deadly. Please, please please, do not use recipes older than 1988. It is worth every penny when you buy the new jars. Follow directions and keep everything clean.

Contacting your County Extension Service Agent is also a good way to network in your area with folks that know how to put up food.
http://www.csrees.usda.gov/Extension/ 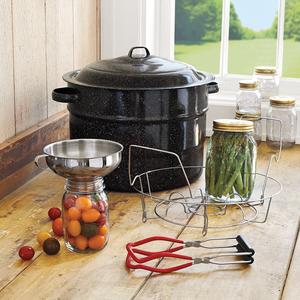 This has got some awesome & easy pickle recipes. My favorites, Dilly beans and the Bread & Butters. YUM!!!

I second the dilly beans (from the blue book) and the crock pickles sure make me pucker! mmmmm good

Most places have a preserving book right in the canning section. also, contact your local extension office, they always have tons of information. Or there is "canning for dummies" also

It is really easy, i promise!

camprn wrote:
Botulism can be deadly.

Eegad... that's enough to scare me off of this project.

I've got the big steel pots for sterilizing the jars, but I haven't found one of the big giant pressure cookers anywhere locally. Anybody have a good, affordable source for those?

the gauges and pop valves are readily available new, as long as the lid fits snug, they last forever

This site has a wealth of information, including many step by step canning instructions. This links to the canning tomatoes page, but surf around the site for more!

Your best self-help will be Ball's Blue Book. Contact county extension agents for more "extended" info. They have lots of pamphlets and can help with questions. Don't be afraid to ask!

Habitat for Humanity store is another source. I found pressure cooker (not canner)

Anyone out there old enough to remember half gallon canning jars? My canner is the tall kind that holds 7 half gallon jars.

I saw a canner last week at Walmart. It looked like it would hold quart jars. I think it was around $60. If you buy a new canner it will have instruction book with timing instructions.

As mentioned before, follow the directions & you'll be safe. Your county agriculture office will have loads of info & recipes FREE. They might even have a community cannery.

You can also have your pressure gauge checked for accuracy at the extension service.

My advice to a first-time canner would be to begin with high acid foods such as pickles or fruit which can be canned in a waterbath canner, rather than a pressure canner. Jams and jellies are also good for beginners.

In water bath canning, one covers the jars with at least an inch of water and boils at a rolling boil for a prescribed time. In a pressure canner, a small amount of water is added to the canner, the lid is closed tightly, and steam builds up under pressure which heats the food inside the jars higher than the boiling point of water. That is necessary to kill botulism toxin. The chance of getting botulism from correctly-canned low-acid foods is almost nil if the food is properly canned and prepared. However, it would probably be safer to begin with high-acid foods until you're confident that you know what you're doing. (Botulism does not grow in acid environments.) It is recommended to boil all home-canned low-acid foods well before cooking. They used to say at least ten minutes, but I've seen some websites which recommend twenty minutes.

Tomatoes used to be considered a low-acid food, and therefore safe for waterbath canning, but they now say there are so many variables affecting the acidity that tomatoes are no longer safely canned by waterbath unless acid is added to the jars in the form of lemon juice, vinegar, or ascorbic acid. Otherwise, can them in a pressure cooker.

Having said all that and frightened some people, I will say please, please, please don't let a fear of botulism keep you from canning your garden harvest. I have canned all my life, as did my mother and grandmothers before me, as well as most of the women in my community. None, not one single one has ever to my knowledge suffered any ill effects from home-canned food. (Well, except for my neighbor who once forgot to check that the gauge hole on the pressure cooker lid wasn't blocked. They say she never did get all those tomatoes off of her ceiling. But that was operator mechanical error, not from the food itself.) Botulism is very rare, and it occurs in commercially-canned foods as well, so don't fear of it keep you from home canning.

Buy yourself the latest Ball Blue Book or get info from your county extension office. Use a sturdy canning funnel - Bridge Kitchenware sells a great stainless steel funnel - and get a good jar-lifter. I burned myself more than once trying to remove hot jars from the canner with tongs until I finally broke down and bought myself a good jar-lifter. Although I will occasionally waterbath in thinner jars such as mayonnaise jars, I only pressure can in commercial canning jars. I try not to scrape knives on the inside of any mayo jars I plan to use for canning. That could weaken the jar and allow it to break in the canner.

With high-acid foods, if they spoil you can see it. Either the lid will be bulging, or you can see mold growing in the jar, or there will be a bad smell when the jar is opened. Botulism has no taste, odor, or smell, so I really stay on my toes when canning low-acid foods such as green beans, soup mix, potatoes and salsa (if one adds peppers or onions, salsa becomes a low-acid food and should not be water bathed, but canned only in a pressure cooker.)

In more recent years, I have begun freezing most of my low-acid foods because after all those minutes of high pressure canning, and then boiling them long enough to be safe before eating, the veggies were nothing but mush and I'm sure many of the vitamins were lost. I still pressure can tomato juice and soup mix, and waterbath our abundant crops of pears, but I freeze my green beans, tomatoes, onions, peppers, corn, peas, and okra. I waterbath pickled cucumbers and beets, pickle relish, and sauerkraut, and I make lots of jellies and jams.

Good luck with canning! There is no greater sight of summer for me than to see newly-canned jars of pickles, tomatoes, and pears lined up on my pantry shelves, waiting to stave off the wolf of winter.

Thanks for all that info ander... and for putting more fear into me.

I went to the extension office today and asked for info and they looked at me like I was from outer space. They rummaged around and found an old, old book and said I could get online and order it from a university somewhere. I thanked them for their time and left.

I didn't mean to instill fear in you, just caution.

I cringe when I hear some of the old-timers around here still talk about open-kettle canning. Decades ago, people would bring their veggies to a boil, put them in a jar, and screw the lid and band on tight. The lids usually sealed because the food was boiling when it was put in the jar. But that's all they did, - no pressure canning, no water bathing, not even a hot water bath. They assumed if the lid was sealed, then the food would safely keep on the shelf for months. I suspect that method was the cause of most of the rare botulism outbreaks which occurred. The food was heated enough to seal it in the jars, but it wasn't hot enough to kill the botulism which loves to reproduce in a sealed environment.

I also saw my cousins "can" sausage by frying patties of sausage, stacking them in a fruit jar, and pouring hot grease over them. They put the lids on the jars and turned them upside-down. They said the grease "sealed" the jars, making the sausage keep safely on the shelf for months. Needless to say I never ate breakfast with them after that, but in all fairness, both of them lived to a ripe old age.

So again, it's rare that food-borne illnesses happen, even with improper canning methods, but when I know I will be serving the food to my grandchildren, I try to follow all of the latest recommendations.

(In fifty years our grandchildren will probably look back at us and say, "How did they ever survive with those crude canning methods? My grandma even used a pressure cooker! Everyone knows the only safe way to preserve food is to add Martian dust, or heat it in a home-fusion reactor.)

And I'm talking too much again, so bye.

[quote="jjphoto"]
I went to the extension office today and asked for info and they looked at me like I was from outer space.

JJ where are you located?

Texas - up by Lubbock. Where the wind is blowing about 50 mph and just broke one of my birdfeeders.

When they say to "boil the food before tasting" does that mean you put the sealed jar back in boiling water for the allotted time?

How do you prepare your veggies prior to freezing and what do you freeze them in?
Thanks

Thanks for taking the time to write such informative posts. You're a wealth of good information on the subject.

Your line about tomatoes on the ceiling reminded me. We started canning just a couple years ago. We started with the water bath to build up our confidence for using the pressure cooker for the first time. Wife and I finally looked at each other one day and agreed it was time to try it. So there we were in the kitchen with leather welding aprons on, gloves, and full face shield protection. (dang we got hot) No horror story to tell about it but.....somebody finally said to me 'you know, there's less pressure in that cooker than there is in your car's radiator'. Well phooey, I'm not scared of radiators (although I respect them when hot) why I am scared of a pressure cooker?