@Boffer - ha it's 30' actually...I had planned to make it as long as the space allowed, which is 50' or 60' with room for a 3' aisle on either end, but I just ran out of money. So I'll extend that one next year before I start a new bed farther down the hill.

@NH - Yah the boards are only 6'; that's all I could fit in my little civic. At first I just nailed diagonally through them, but realized that wouldn't work at all pretty quickly. I got these things (wood joiners or something?) that are like little metal panels with spikes coming out that you bridge across the two boards and fasten them together. That still really didn't work too well, which you can tell even from the distance of the pic, but it's good enough.

@NH again - Ha thanks! That's Allie; she's the middle-child. I also have Ben (3 1/2) and Olive (7 mo.)...I'm making a video of my garden progress (basically all the same stuff as these pics but in video form), and you'll at least get a peak at Ben if I ever finish it, as he likes to "help" me.

Love the pics of the garden and the kids. Beautiful.

Well I figured it was time for a garden update! I've posted some of these pics in the Tomato and Potato threads, but I'm going to post all the pics in this thread so that I have them all in one place, since this is kind of like a mini-blog, lol, and I'll probably refer to it in the future. If anyone thinks it's rude or anything to post pics in multiple threads though, I won't do it again, just let me know!

Anyway, I have a few questions for some of the pics so if anyone could help me out with them I would really appreciate it!

I finally stopped pulling off my strawberry blossoms and I have a few coming in! 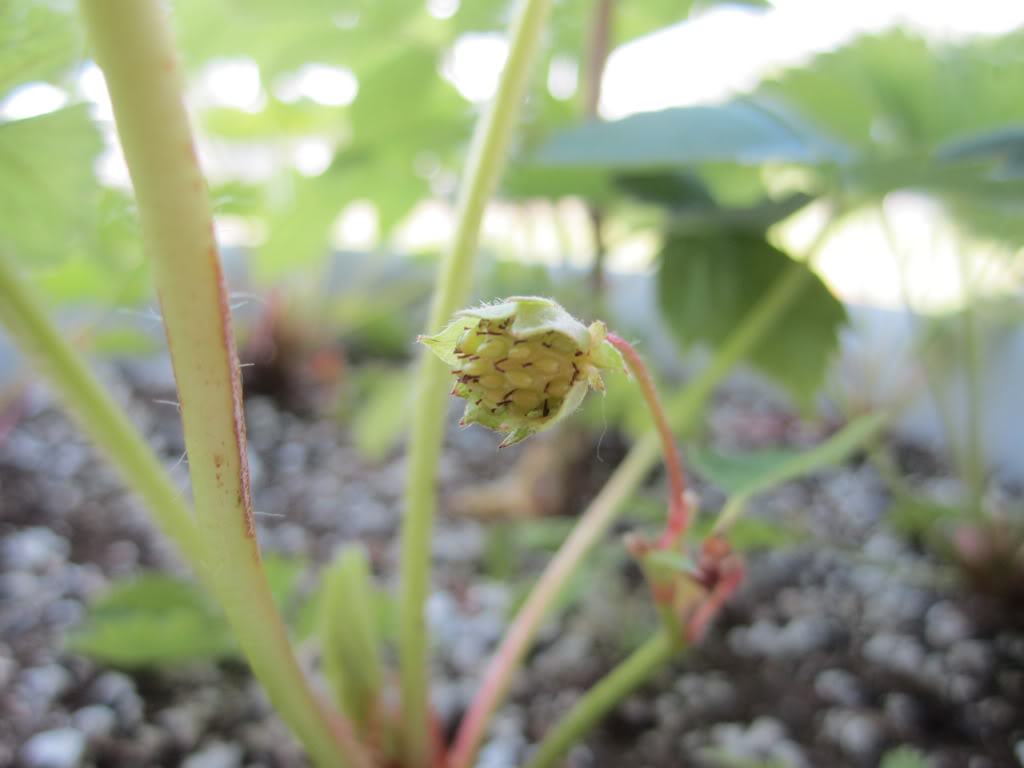 The raspberries are doing great! I don't think the two canes I have (one never came back to life) will produce as much as I need, but they both have more than one 1st year canes growing, so I'm guessing I can separate them and plant them in their own pots after they go dormant? 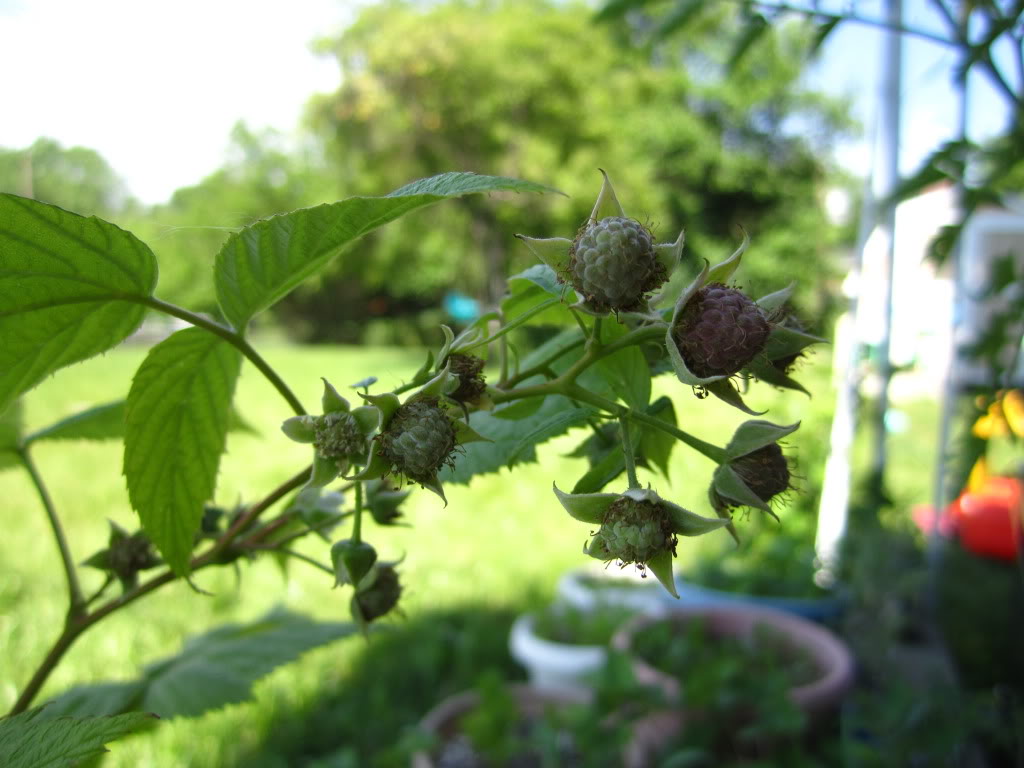 All of my herbs are growing likes weeds, as always, except for my cilantro, as always. I use cilantro more than any herb I grow so it's annoying that it's the only one I can't get to flourish, lol. Anyone have any tips for why it's having trouble? 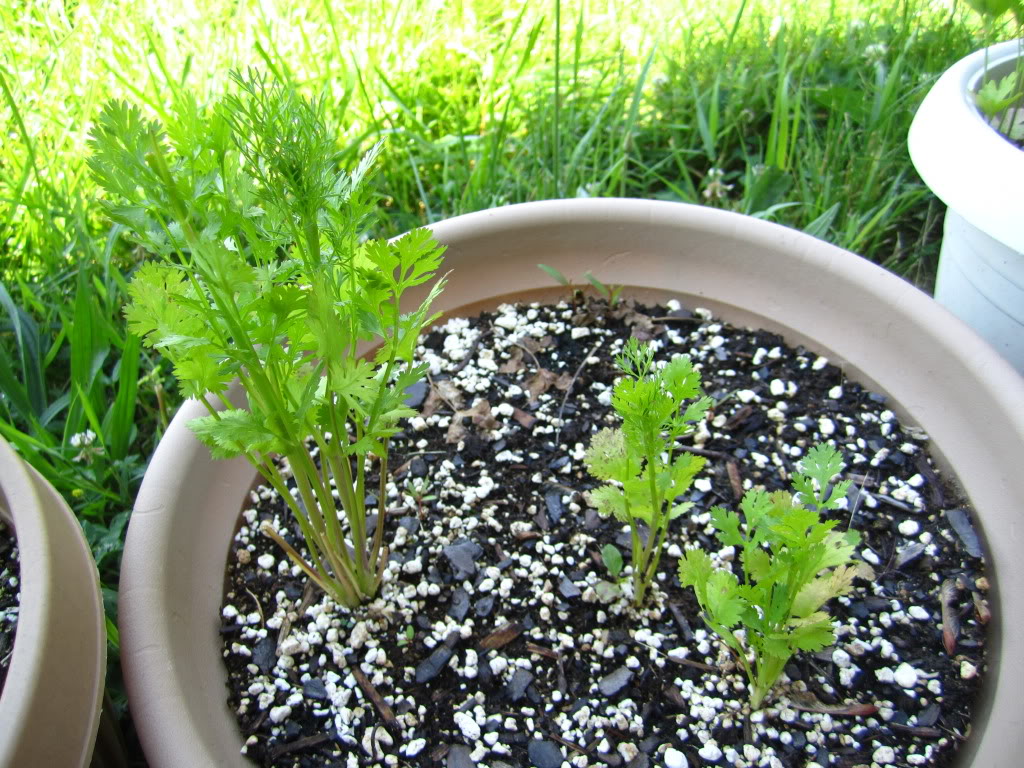 Potatoes all seem to be doing great! The pics are Yukon Golds, Beauregard sweet potatoes, and the store-bought russets in my compost pile. 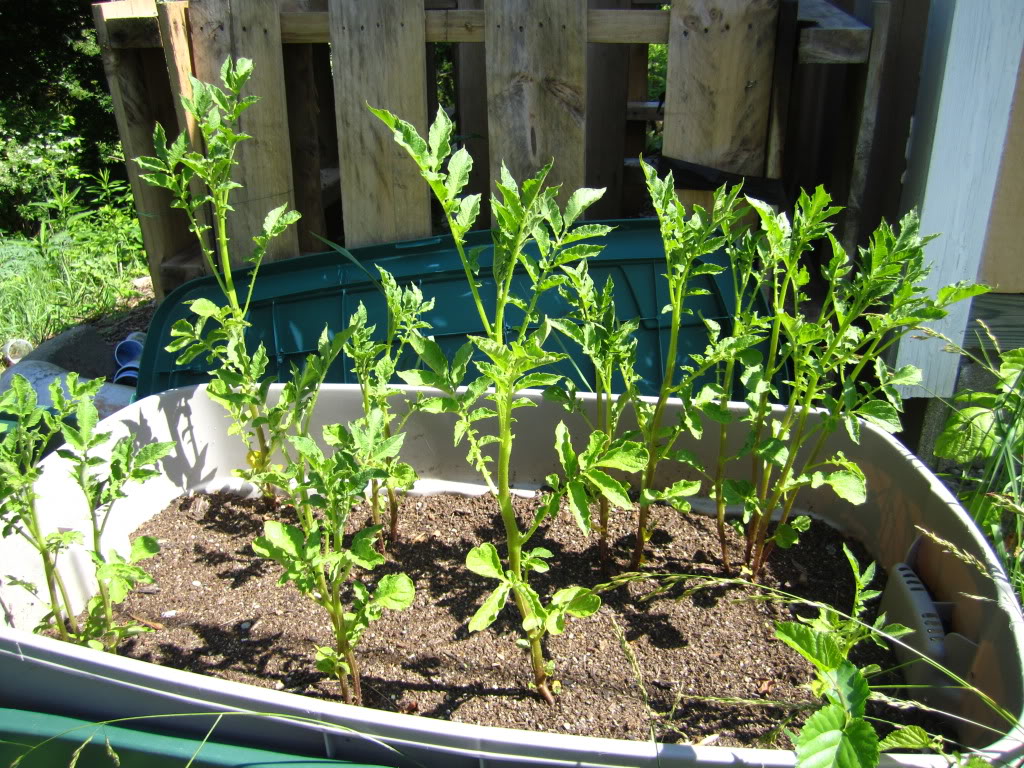 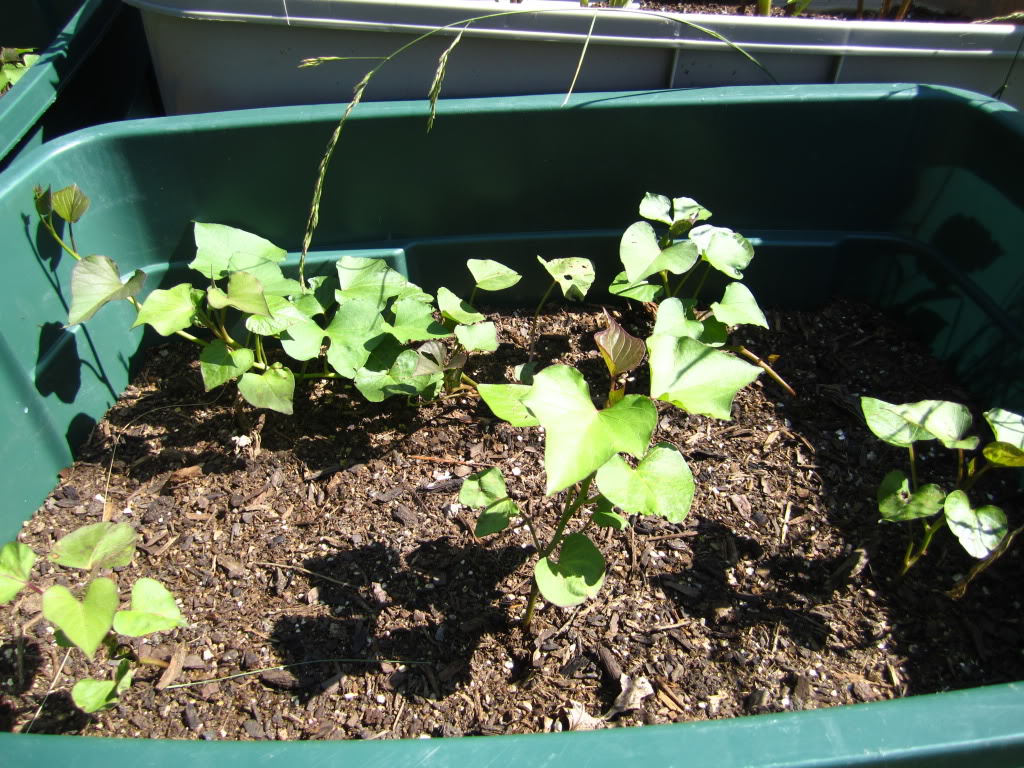 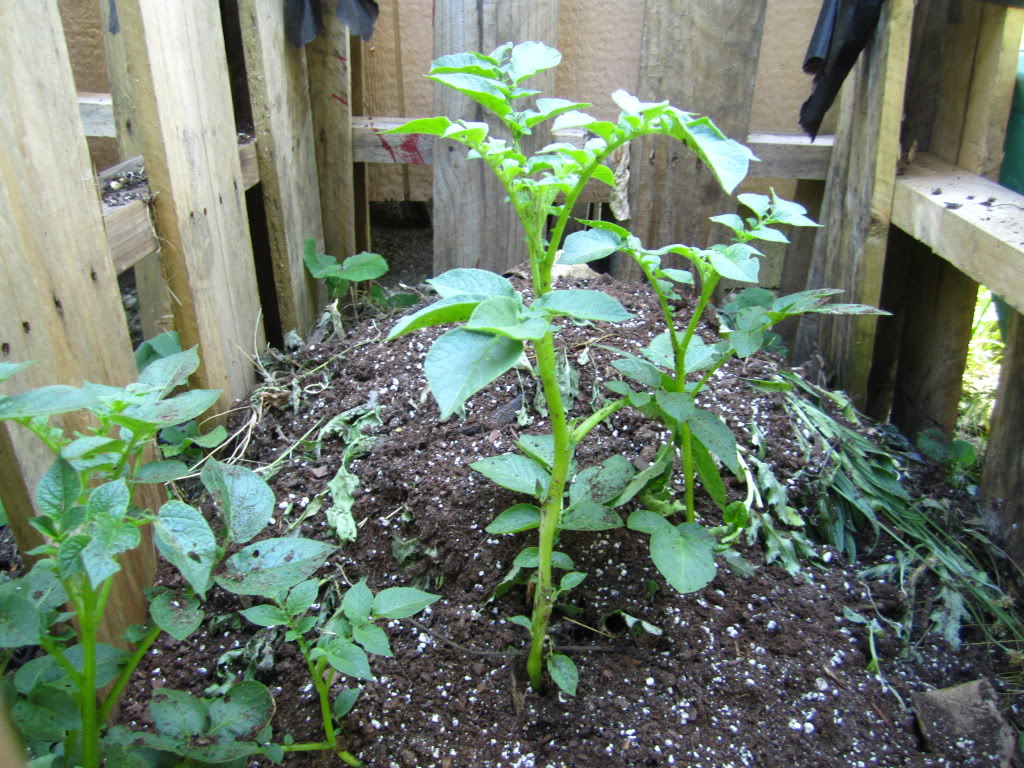 Romas, 6 of 8 of which I've fashioned these trellis-type things for, and I'm tying them up the middle stick as they grow. It's working out well so far! 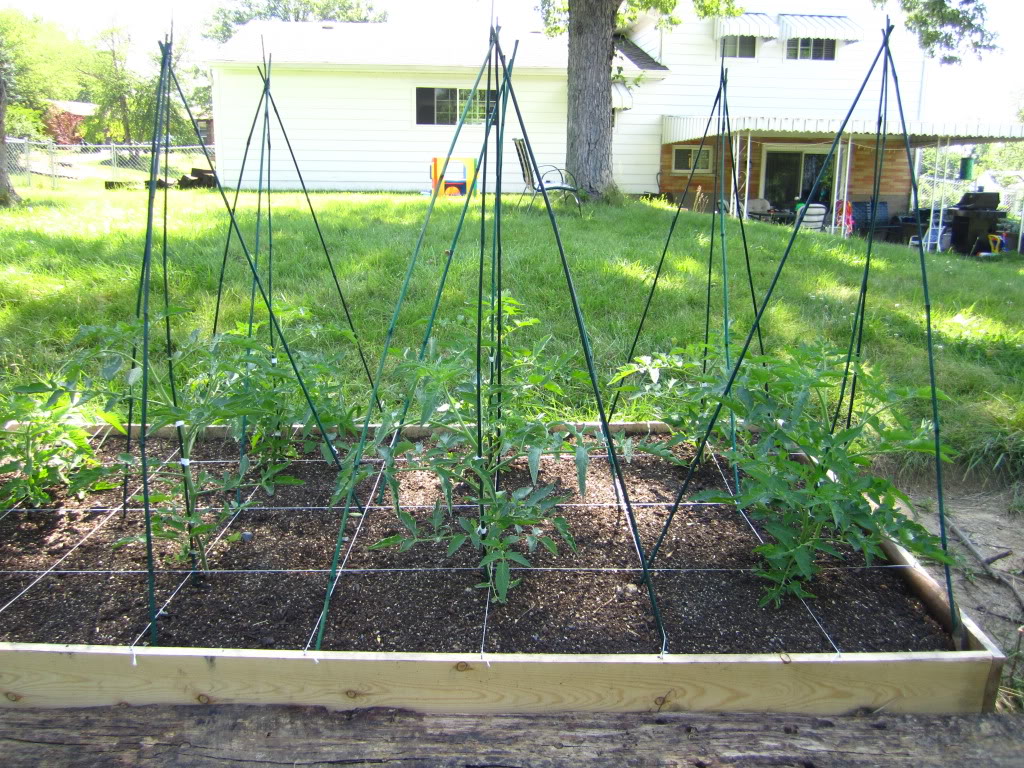 Now this is a sucker, correct? But I don't cut them on the Romas, only on Indeterminates, right? 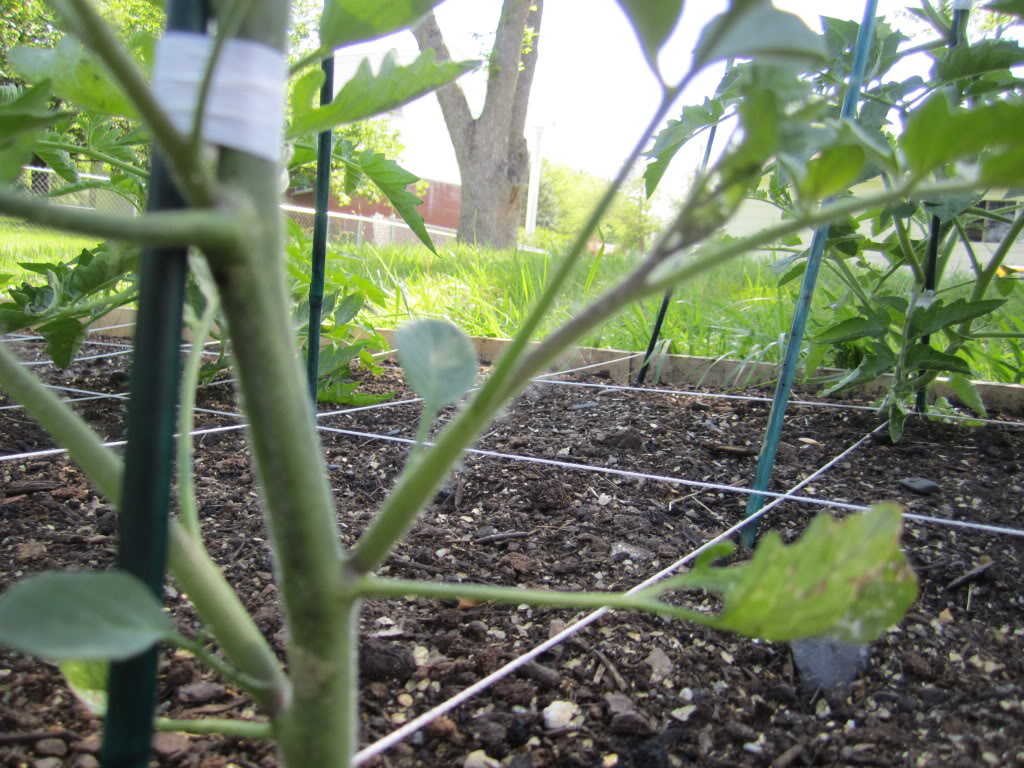 Romas are all working on their second set of blossoms! 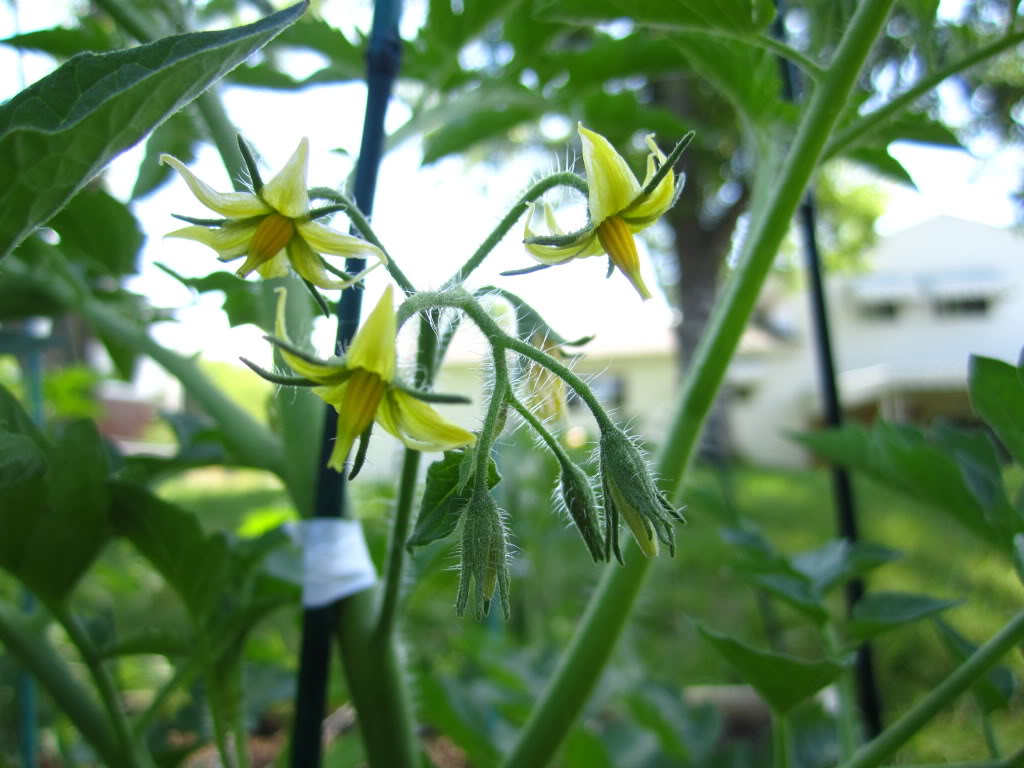 The "long view" of the garden, showing all my indeterminate tomatoes (Chocolate Cherry, Nonna's Prize, and a random heirloom mix) along the back (left) side and bell, chocobelle, lipstick, jalapeno, and cayenne peppers in the front (right) three rows. Down toward the end are a succession planting of bush and black beans as well as some onions that aren't doing much and aren't pictured elsewhere. 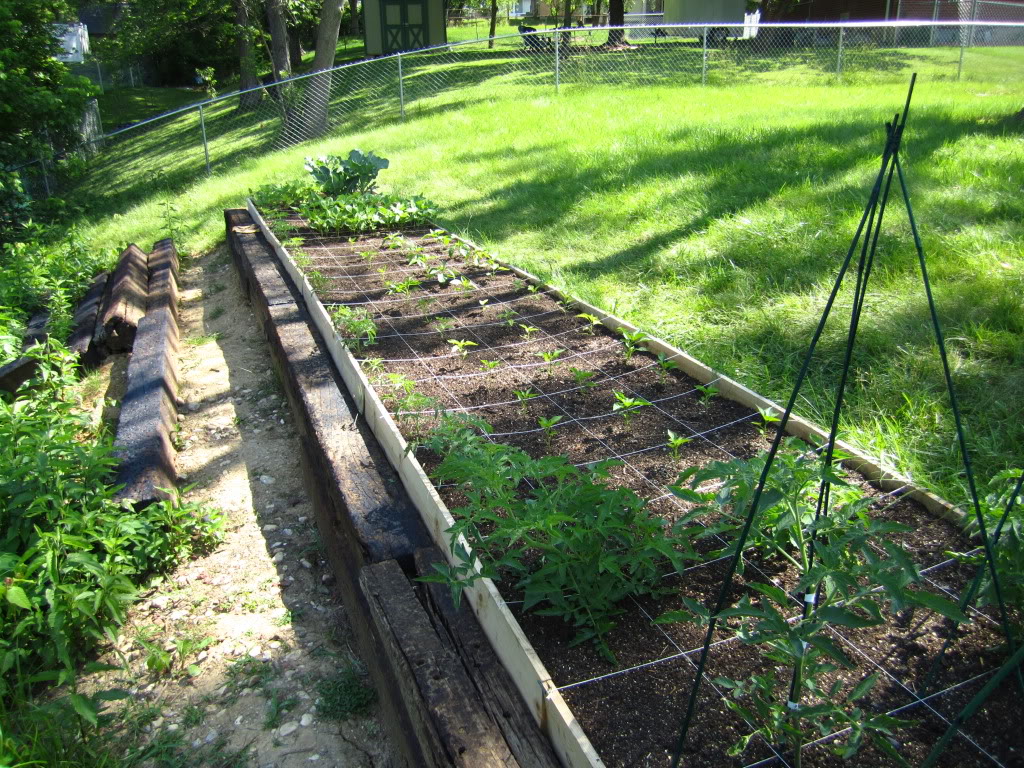 This bell plant already seems to be getting some blossoms ready, but it's only about 6 inches tall, and I only transplanted it a day before this pic was taken (2 days ago)...should I pinch those off when I can reach them or no? 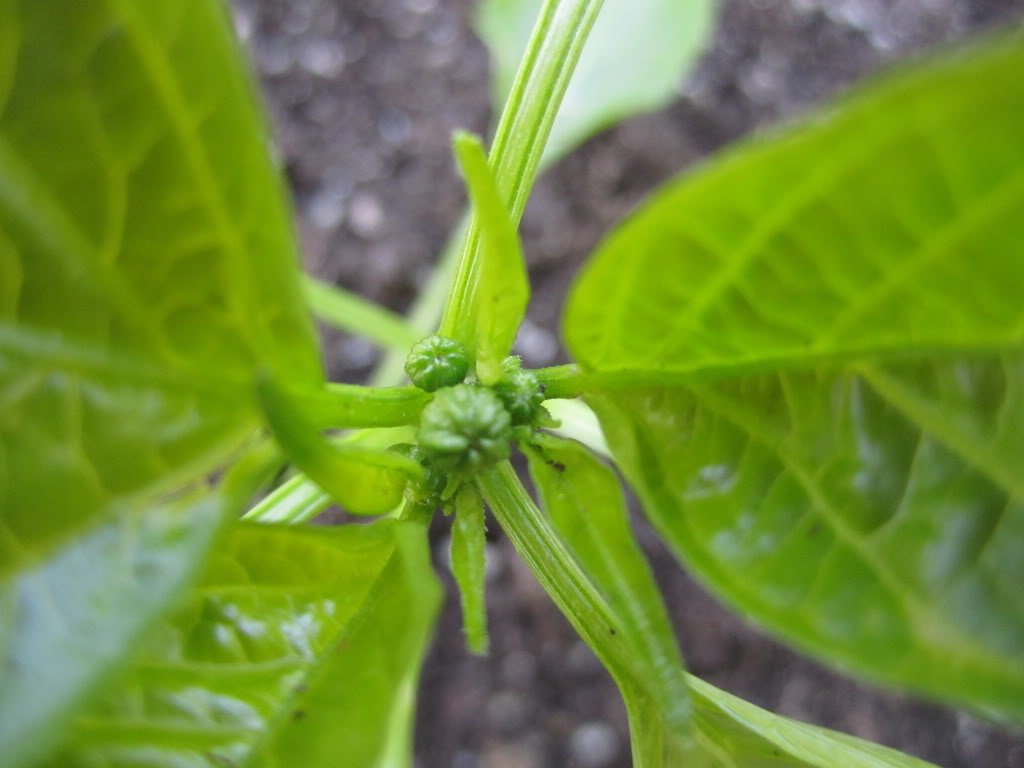 The same plant from the side. To be fair, I did plant it 1/2 to 1 inch lower than it was in the cup. 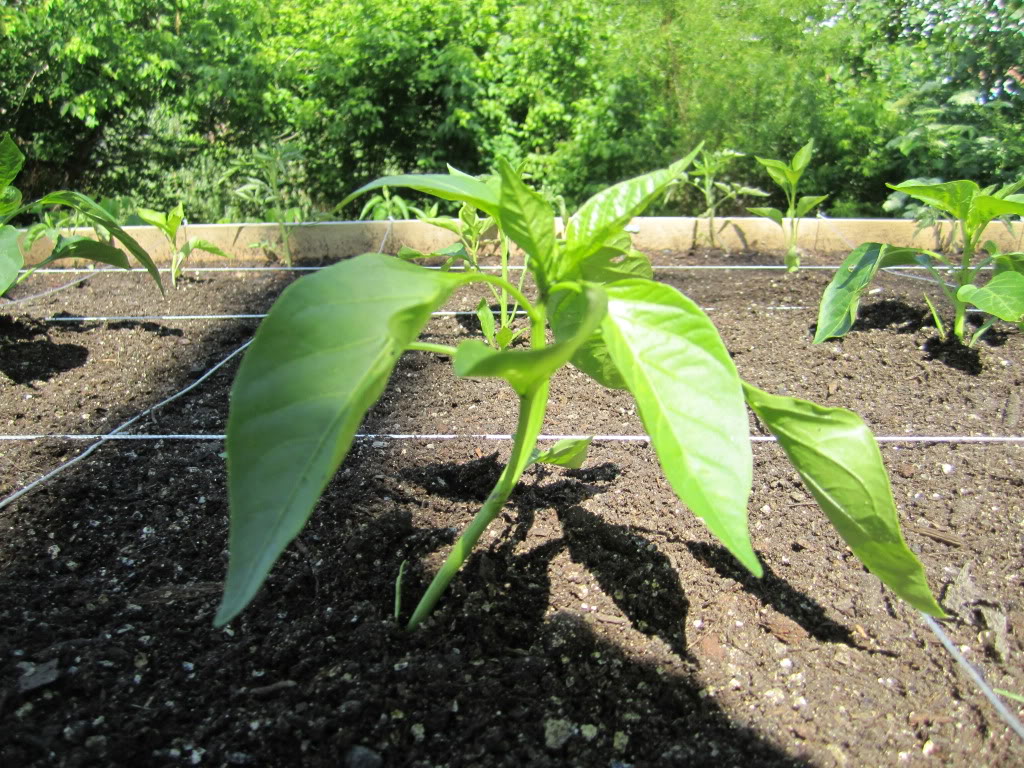 The "pretty side" of my garden.

Broccolis and Cauliflowers are going nuts, beans and peas seem to be growing slowly but surely. 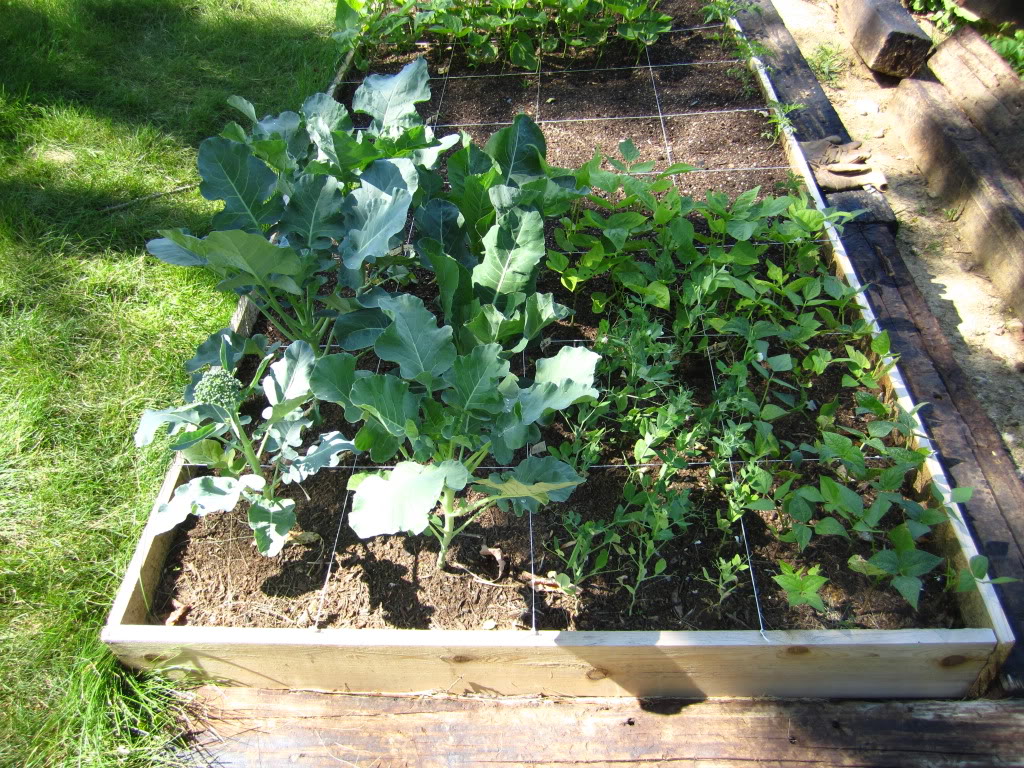 I don't know how clear it is in the above pick, but while most of the broccolis are quite big and haven't started on a head of broccoli, this one is substantially smaller and does have a head growing. However, it appears very loose. Is it bolting early and should I just pull it? 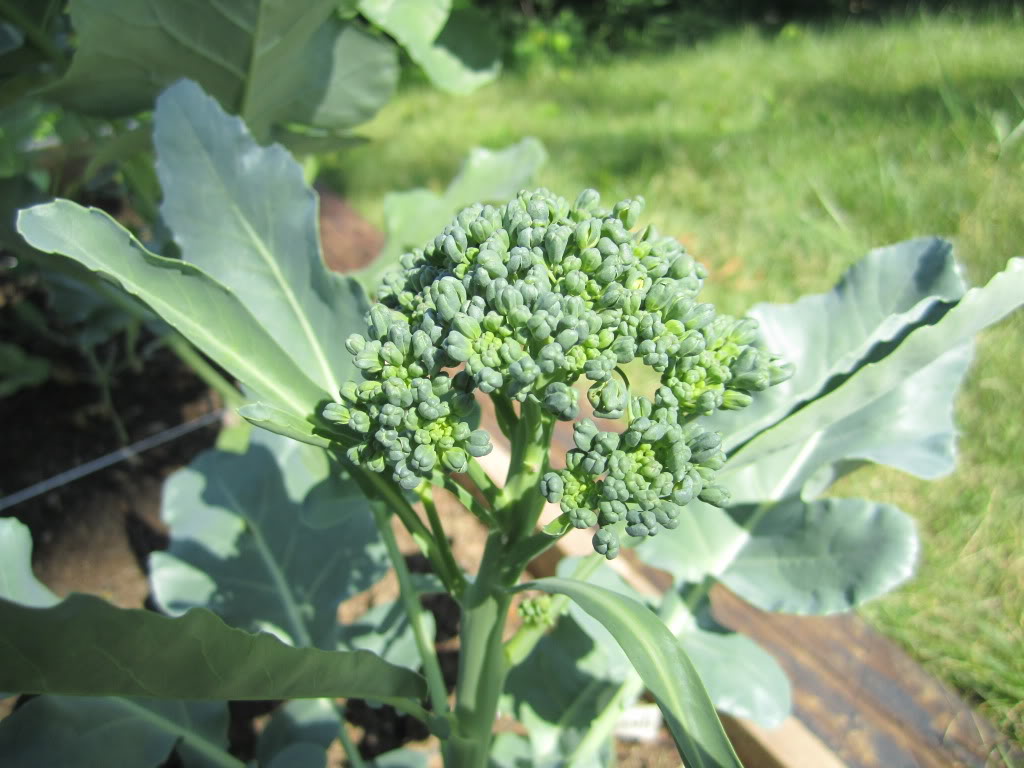 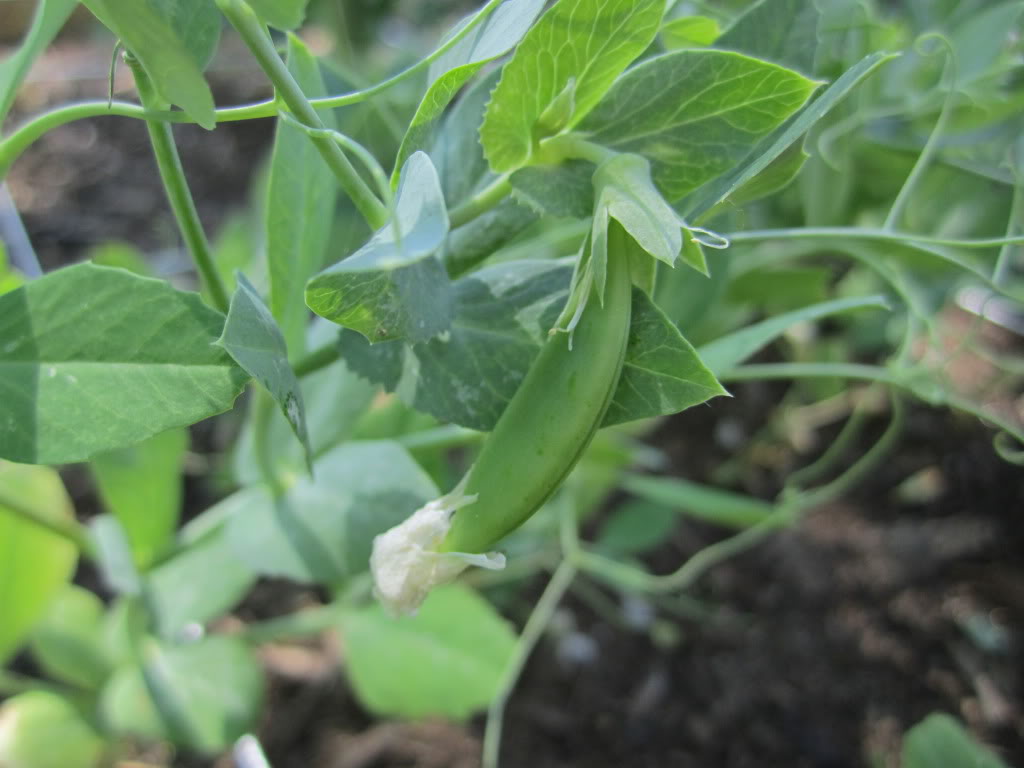 The sugar snap peas are really small, maybe 8 inches tall, but they're all flowering and growing peas...I've never done these before, are they just that small or is it because it's so late in the season or something? 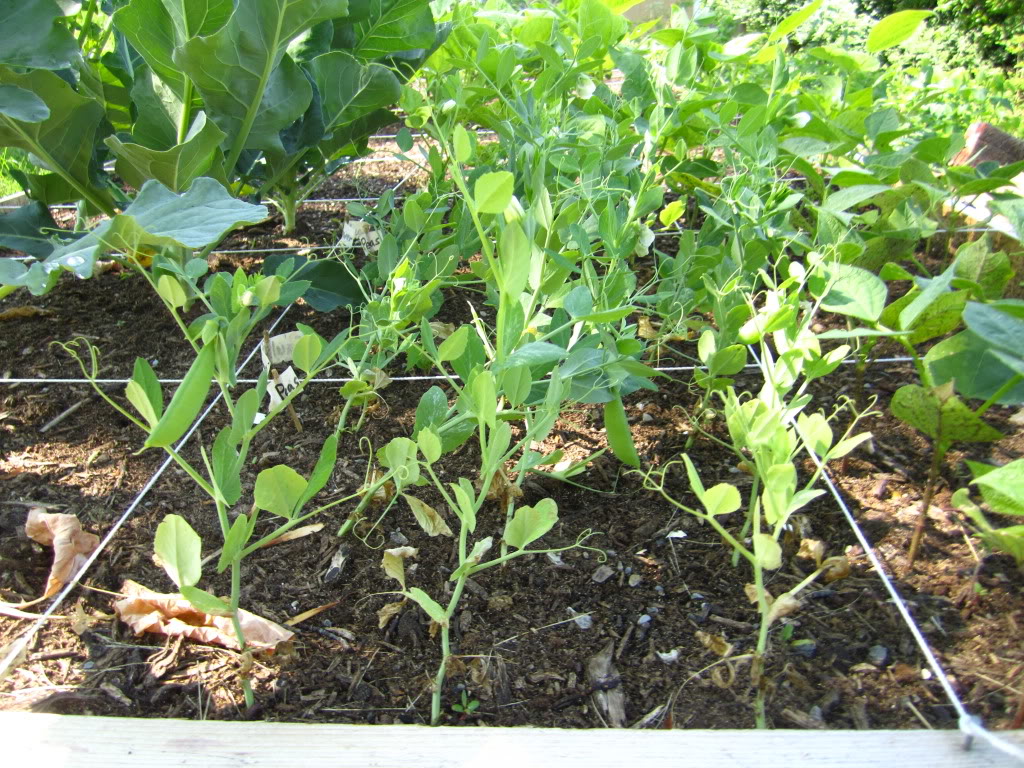 Ok I think that's it for now! Thanks for checking it out; have a good one.

I don't know how clear it is in the above pick, but while most of the broccolis are quite big and haven't started on a head of broccoli, this one is substantially smaller and does have a head growing. However, it appears very loose. Is it bolting early and should I just pull it?

It's past its prime; snip the crown and pop it in your mouth! Leave the plant for a week or two to see if it will develop any side shoots for you. If not, then pull it.

Plants are like kids: few of the seeds in a package will turn out to be the same size, shape, and mature at the same rate, just like the kids in a large family are all different.

But Boffa, all the kids in a large family are not born at the same time, unless you are an Octomom. (I wonder how they are all doing? OK, I hope.)

True, but if the kids all have the same parents, they will have enough genetic markers to identify themselves as siblings and who their parents are. If all the seeds in a package came from the same flower, that was pollinated by the same source, they too would have similar genetic markers that would identify their origins, yet allow for individual characteristics. Excuse me now, while I go look for my waders!

Kelejan, I have not heard anything on the octobabies in a long time. I also wonder how they are doing.

@boffer wrote:It's past its prime; snip the crown and pop it in your mouth!

Thanks for the info boffer! I thought that might be the case.

Does anyone know if I should snip those future blossoms off my bell pepper?

I know I just popped them off my 6" tall pepper plant! In my area it is WAY too early for peppers to set fruit, especially on such a small plant (silly pampered nursery transplant!), so I popped them off to give the plant time to grow to full size and set a really good crop instead of 3.

Great looking gardens Mike.
You made up a lot of Mel's mix
Please post pictures when you are completely planted 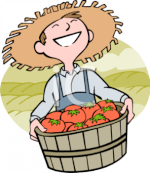 @Goosegirl wrote:I know I just popped them off my 6" tall pepper plant!

Thanks for the info GG, that's the confirmation I was looking for! They were just in cups too long, I think that's why it started so small. Luckily it's the only one to do so thus far!