If you live in an area with little winter sunshine, and want to get a head start on your spring growing season, an H3 (heated hoop house) is a relatively cheap, effective method to do so.

I've been using two traditional cold frames for five years. The biggest problem with them is that when the sun doesn't shine, they just can't stay warm. This year, my H3's outpaced my cold frames by 7 weeks. I'm on my second plantings in my H3, but I haven't eaten produce out of my cold frames yet. To be fair, I've had an extra cool and wet late winter and early spring, so I don't think the difference will be so large all the time.

For someone who doesn't have the room inside to germinate seeds, a H3 is a good alternative. I used one H3 to germinate 50 broccoli and 25 cauliflower seeds, planted 5 per square. When they reached 6-10 inches, I started transplanting them into their permanent beds, a few each week. They're all doing well despite some freezing overnight temps. I planted 3 tomato plants in March. Rather than up potting, I planted four tomatoes just to keep them until I could plant outside, which won't be until mid-late May. I'm also germinating multiple squash and cuke seeds.

I just built my third H3 and remembered to take pictures. Here's the process, along with commentary, since I'm learning all this as I go along. Insulation selection was based on what I had on hand or convenient.

The soil heating cable: I bought locally, but it's sold on the internet.. It takes a surprisingly long length of cable. The longest cable will heat 12 sf, and it costs ~$3/sf. I used the longest cable in my first box that was 15 sf, so the cable was a little undersized. It worked just fine for cool crops. I used a kill-a-watt meter to measure power, and I figure it cost me 12¢ per day to operate. My second and third boxes, I put two cables in each box to have more versatility. (for instance: heat on for warm crops on one side, and heat off for cool crops on the other) The thermostat is fixed at 74°; I can play a little bit with soil temperature by moving the thermostat higher or lower in the MM (ie. closer or farther from the heat source on the bottom)

The instructions say to mount the heating cable on ½ inch welded wire, then flip the piece of wire upside down to put the cable on the underside so it will have protection. Um...I didn't do it that way, and the heating cable is unprotected. I raided the utensil drawer in the kitchen for the oldest wooden spoons and spatulas to use in my heated boxes in lieu of a metal trowel; plastic utensils would be safe to use also.

My first box was a retro-fit: I put the cable into a 6" deep box, and I lost 1" of MM due to the insulation. That shallower depth hasn't been a problem. My second and third, I made the boxes 8" deep. This is one inch Styrofoam insulation that I had on hand. 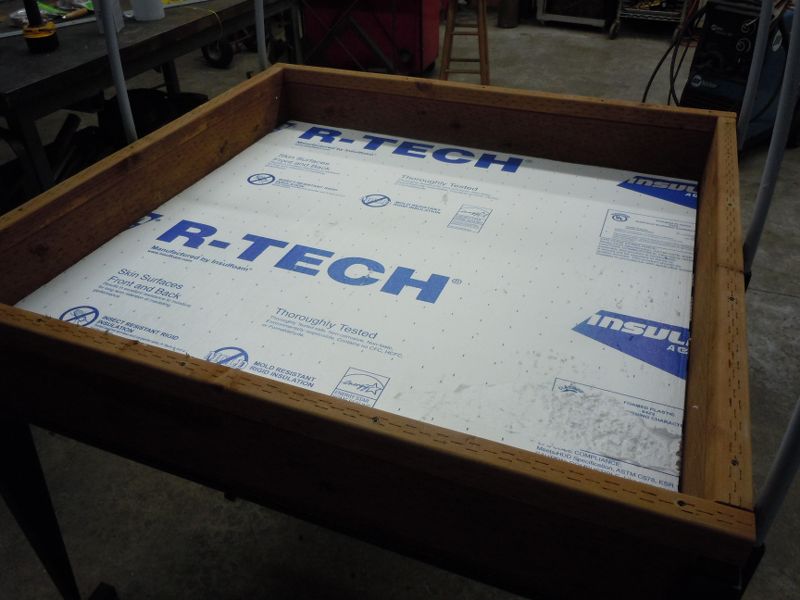 Then I lined the bottom and sides with ¼ inch bubble wrap sandwiched between foil layers. 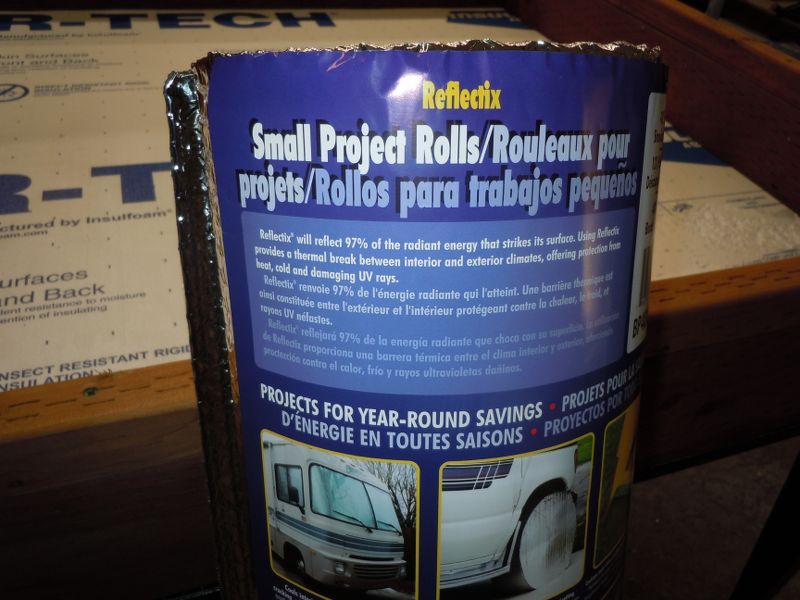 I found a roll locally that was 4x10 feet, which was perfect. 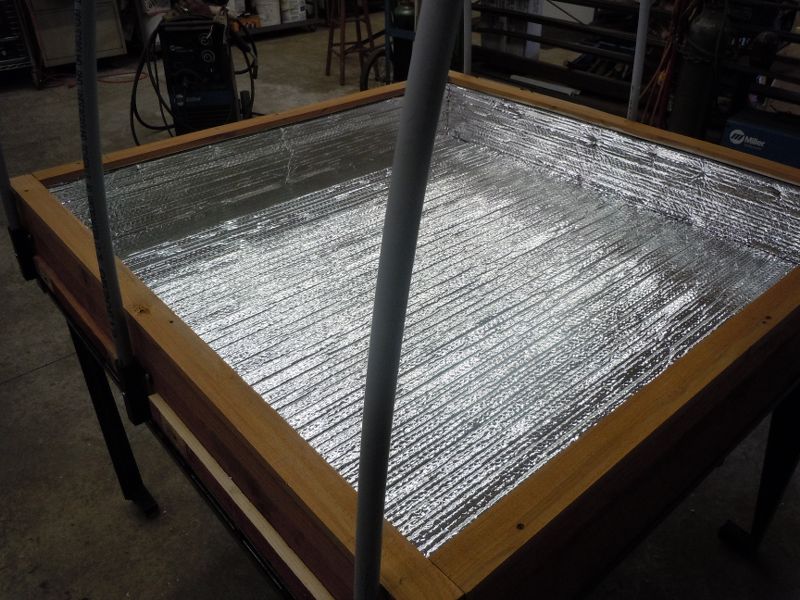 I put two cables in this box. The little clear plastic tube holds the thermostat. 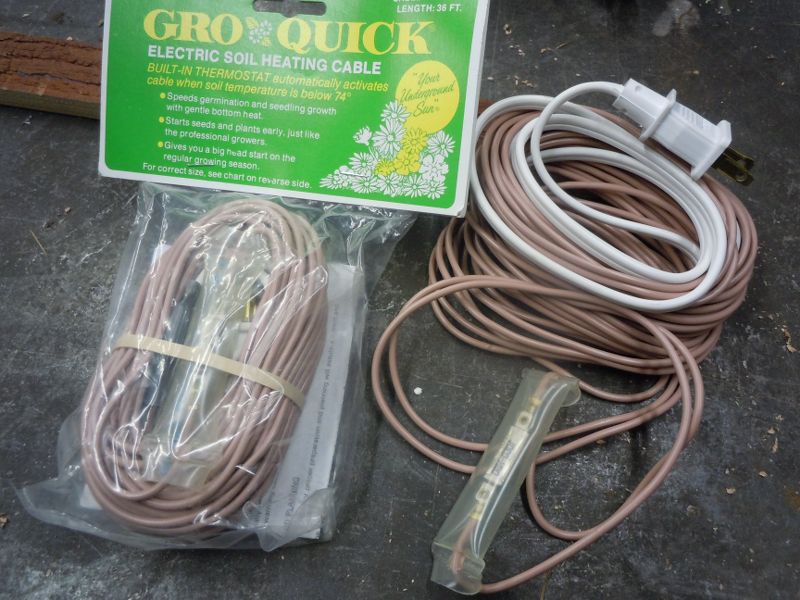 I took a bunch of pictures for this view, but I'm not a good enough photographer to deal with the shiny reflective foil. You can see how I used regular duct tape to keep the cable attached and lined up on the foil. I left some slack in the cable on both sides of the thermostats so they could be lifted up into the MM. The cable does not get 'hot'; it gets barely warm to the touch; that's why it takes so much. 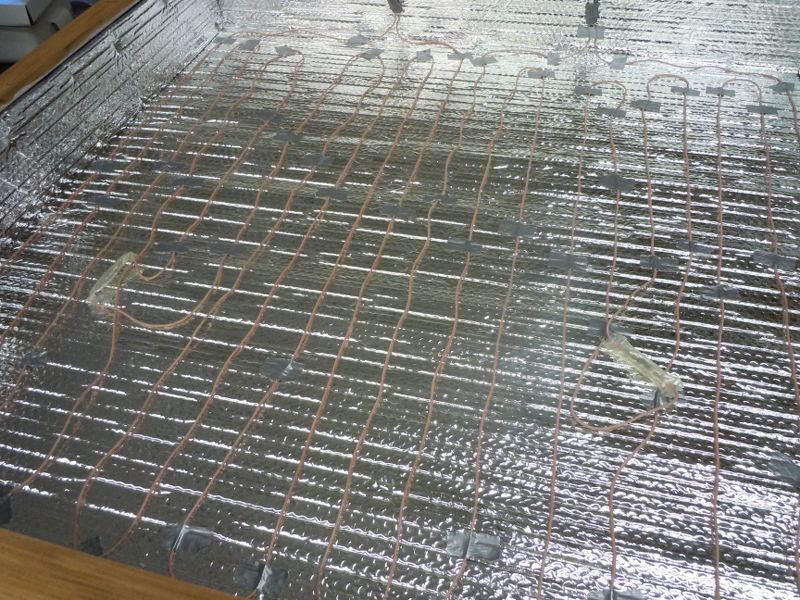 This is how I safely secured the zip cord to the box. 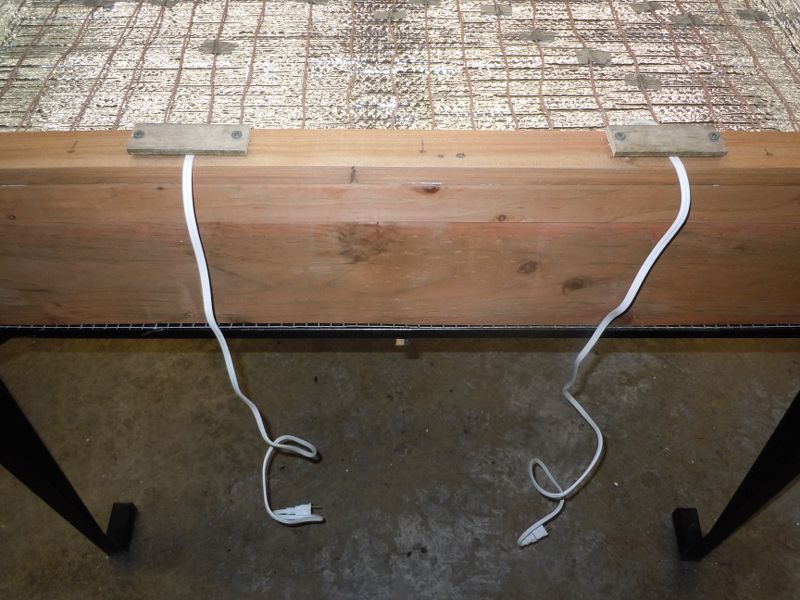 Make your hoop house however you prefer, and go for it! I haven't tried using an H3 to extend the season in the fall yet. I may try some lettuce and spinach this year.

The great results I described above were with cool crops. I had the heat on for about six weeks. 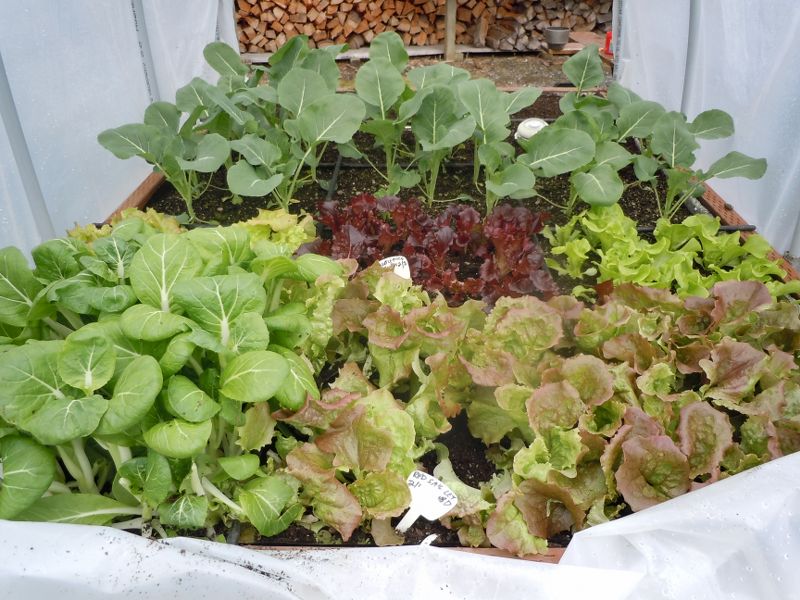 This box, I've had the heat on since mid-March for the tomatoes, artichokes, and peppers. I do use a supplemental lamp for the warm crops for extra heat on cold nights. 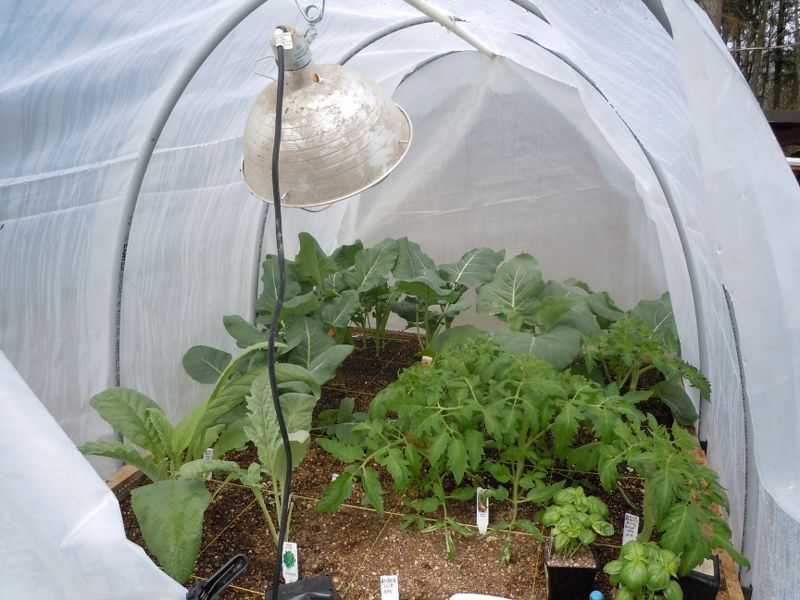 Thank you so much. I really like the detailed commentary on building the box. Since I "steal" your ideas frequently, I want to use this one too.

How did you handle drainage?

That's awesome! And great tutorial! How cold do you think it could get until this wouldn't really work anymore? 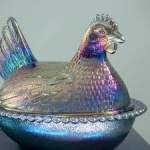 I wondered about drainage too. We had a convo on an earlier post about lining boxes with plywood bottoms. Where we ran into trouble was trying to figure out how to drain it (as poking holes seemed to defeat the purpose of lining the boxes to prevent contact with the plywood). In the end, we just used the plywood as is, but I'm still looking for other solutions. In his book, Mel just uses the word "plywood" and specifies the thickness. He doesn't specify the type of plywood needed, like he does when he talks about the boards for the sides. Not sure if it needs to be the expensive formaldehyde-free stuff or if regular plain old sheeting is good?

It does seem that your regular solution of hardware cloth and weed clothes would allow for drainage and still give you a box "bottom". I may try that next time. But am curious now how you drain your heated boxes, too.

I guess I glossed over drainage. It's a TT, with hardware cloth bottom, so there is drainage around the perimeter of the box, where the sides meet the bottom. Just as an afterthought, I took an awl and poked a dozen random holes through the bubble wrap and Styrofoam. Whether the holes will help with drainage or interfere with heat retention, I'll probably never know.

When it comes to extended cold temps, I don't know. In late Jan and early Feb, I had overnight temps in the high teens. The soil stayed at 53°+ which is plenty warm enough for cool crops. There are too many variables to consider: depth of the thermostat, depth of the soil thermometer, where to place the air thermometer, short term cold temps might be irrelevant, long term consistent low temps could be more important...who knows? I always err on the side of lazy: it works or it doesn't. YMMV and so will mine, from year to year.

For anyone with spring fever, it's just another technique to explore, that pushes the limits.

Betcha can't guess whos idea the garden was and who thinks the other has already spent way too much money on it... 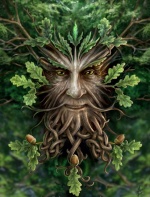 Hoggar wrote:...Betcha can't guess whos idea the garden was and who thinks the other has already spent way too much money on it...

The way prices are rising, you're going to recoup your investment quickly. Besides, you could be using that money to throw darts and drink beer with the boys!

Na it would just go to my boat restoration project...

I may have to give this a go. Over/under is placed at Thanksgiving before I am asking more questions about how to get this set up correctly...lol.

boffer did you put this in the garage or was it outside all winter? What are your outdoor temps like in the winter?

kputikka wrote:boffer did you put this in the garage or was it outside all winter? What are your outdoor temps like in the winter?

This year, I used them outside as a means to get an earlier start on the growing season and as germination beds to grow transplants. Lowest temperature was 17°F. It was not a problem inside the H3 for cool crops. I started the third week in January. I think the bigger problem is the lack of sunshine and short days in my climate and latitude. The plants were warm enough, but even being outside under 'clear' plastic, there just wasn't enough light. I think I'll wait until Feb 1 to get started next year.

i have not tried this. but i have heard ppl talk about it. use a black 55gallon drum of water. during the day the water heats up and at night it will help keep the house warm.

agian i have not tried this ether. but if your garden is close enough to your dryier vent you could run the vent into the greenhouse to help keep it warm at night. one good load of clothes and its warm.

i plan to do both this winter and next spring. has anyone done these tricks? how did they work?

Passive heating can only work if the sun is shining, and even then it's not very effective and efficient. It would be better to upgrade to a passive collector system to warm your barrel. I've read feedback reports on dryer venting as a source of heat. The bigger the family, the better it works.

I don't get much sun in the winter, or in the spring, or in... In a heated hoop house, for just one thin dime a day for electricity, I get the heat and dependability to do a lot of early season stuff that I couldn't otherwise.

yea i know you need sun to make the barrel work. and for where you are your set-up works great. maybe i should have started my own thread lol. sorry if i hyjacked yours.

Why don't you start another thread. Backyardbirdgardener did some experimenting with black milk jugs this spring and would have some feedback to contribute.

I have a huge commercial heating radiator in my stash, waiting for me to get around to building a passive solar collector system to heat water to warm the greenhouse I haven't built yet!

What was the impact on your electric bill?

(I am loving this idea!)

Wow, so if one has temps in the winter that range from -30F to 30F for 4 or 5 months, that doesn't seem cost effective. Never mind all the energy expended on a personal level... Usually by the time Thanksgiving rolls around I'm ready for a rest. I threw in the towel on growing food year round in my climate of 5a

camprn wrote:Wow, so if one has temps in the winter that range from -30F to 30F for 4 or 5 months, that doesn't seem cost effective. Never mind all the energy expended on a personal level... Usually by the time Thanksgiving rolls around I'm ready for a rest. I threw in the towel on growing food year round in my climate of 5a

You're probably right. I don't have a clue how things would work below 20°.

I have moderate winter temps and moderate summer temps. Over the course of a year, I have less heat to grow veggies than you do by 25%. I need all the help I can get!