March Avatar: Spring Will Be Here Soon -- Promise! (click this)
Welcome to the Official SFG Forum
!!! Happy Gardening in 2021 !!!
Search
Latest topics
» What Have You Picked From Your Garden Today
by OhioGardener Today at 5:28 pm

» What are you eating from your garden today?
by Scorpio Rising Yesterday at 8:42 pm

» Are My Cukes And Zukes Done For?
by Scorpio Rising Yesterday at 12:26 pm

should I pinch the buds off and let it send it's energy to the new tiny branches?

Shannon, hope you get an answer, my eggplant seedlings (pretty big now) are blooming in the house!
I need to know about pinching flowers too.

I do not usually pinch the blossoms but I do pinch the terminal ends earlier in the season, to make the plant bushier.

What does this mean? I am trying to grow and eggplant, and it appears to have a bud on it now. Am I supposed to do something?

@clfraser wrote:What does this mean? I am trying to grow and eggplant, and it appears to have a bud on it now. Am I supposed to do something?

you may go ahead and leave the bloom as that is where your fruit will develop.
Here is a brief tutorial on pinching terminal (growing) ends of a plant to make it bushier with more growth, thus increasing the blooming and fruiting potential.

Awesome! Thank you. I really should use google and you tube more often. Yall are so helpful.

for the much needed info.

Amazing FBmom! I just started mine about a week and a half ago and they have only just sprouted. You grow girl! I am still on rookie status with eggplant. In my chilly, wet mountain valley I was lucky to get a couple of flowers that would drop off after a few glorious days of blooming. But they are beautiful blooms.

Lotsa big beautiful purple (and all their other colors) ornaments to you who are growing this beauty! 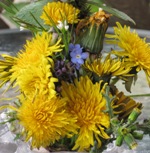 I'm just hoping we have an unusually warm late spring and summer. Last year I had 3 eggplants and one nasty little fruit that never finished developing.

In my usual over anxious need to get started, I planted pepper and eggplant seeds inside in late Feb and early March. Since they can't go out until at least May, I don't know why I start so very early.

Especially, when here on the cool, damp, foggy coast, the OSU extension service says they are not even suitable for me to grow.

Does not matter, I will keep on trying. We might have a warm summer one of these years.

@Furbalsmom wrote:snip.... I planted pepper and eggplant seeds inside in late Feb and early March. Since they can't go out until at least May, I don't know why I start so very early.

Especially, when here on the cool, damp, foggy coast, the OSU extension service says they are not even suitable for me to grow.

.... We might have a warm summer one of these years.

I don't usually quote anyone but this is the 2nd time today I've talked about Boffer's heated, covered tabletops. You gotta get you one.

As quiltbea was famous for saying about the soil blockers, I'm not getting kick-backs

Debs...what am I doing in front of a screen when it is sunny and 60 outside?

I saved Boffer's instructions on making the heated beds and did a bit of research to locate the heating cables locally. I probably will convert one box later, just not sure if I can do this before I have to get these warm weather plants outside.

I especially want to try peppers and eggplant and to warm up those sweet potato starts during the growing season. (all the things the OSU Extension Service says I can't grow here on the Coast) I also want to try the heated beds for winter and early spring seed starting outside. His results were amazing, such early salad and his plants looked so sturdy and healthy.

I did not look at the cost, but in Washington, Fred Meyers sells heated rubber mats to put under a starting flat. I wonder if you could slip something like that into the bottom of your pepper and eggplant squares just to get them going this year?

Just using the cloche Chris made for me on my Broccoli... the one that was under that cloche is probably 4 to 5 times larger and bright green (instead of a purple-gray-green) compared to the same broccoli that was put under the big top or under a clean milk jug. The mats were probably made in China, everything else at Freddie's is. So if that is an issue for you than you will have to keep looking (I am).

Way back when I had the French intensive garden in Robe Valley, I won an electric cable for wrapping water pipes (to prevent freezing) at a raffle. My pipes were good to go, so I snaked it in my cold-frame and had early something that year, doubt it was tomatoes. If you were to plant your peppers/eggplant in rubber pots you could wrap them with heat tape (I think that is what it is called) and put a pretty bell cloche over them (maybe set the rubber pot into a ceramic pot). You just might get fruit.

Debs....who is running out of $$ and wants someone else to try the expensive ideas so she can try it next year.

I pinched off the first bud and boy am I glad I did. It has branched into two leaders and the side shoots are growing realy well now. Plus it must have gained an inch in height over night.