» What are you eating from your garden today?
by OhioGardener Yesterday at 8:06 am

Anyone out there tried crosne tubers?

Anyone out there tried crosne tubers?

Just read about a vegetable called crosne, or Chinese artichoke, which sounds like it would be delicious, and perfect for a table top bed. (read whole article here: http://blog.oregonlive.com/homesandgardens/2011/04/daily_home_garden_tip_crosnes.html ). From the picture, they look alot like sunchokes a/k/a Jerusalem artichokes. We grow sunchokes, but these sound even more delicious. Whadda 'ya think?

They're little guys -- no bigger than the top two joints of your little finger, and not even as big around.

My son is fascinated with them because they look like grubs.

They're boiled and tossed with butter here, and are supposedly delicious. (they're also blindingly expensive in the stores, so we haven't tried them yet, and I don't want to grow them to have him not like them!)

Thanks, LaFee.....like grubs, huh? BTW, how DO you pronounce crosne? Wonder what the grandkids would think about being served vegan grubs. Our sunchokes look kinda like mutant fingerling potatoes. They grow down below the main garden, alongside some gapevines, and do quite well with benign neglect. They sure are good dug out and steamed for dinner this time of year.

You CANNOT laugh at this -- but I've never heard the word pronounced in English or French, so have no idea!

Merriam-Webster online says it's like crosneh...and I don't think you want to KNOW how it comes out in French!

But,.....but, aren't they named after a town in France: Crosne, where they were first grown? Sheesh, even the 'net misleads. "snicker"

That's correct -- it's named after a town in France.

Man, I'm afraid to attempt pronouncing "crosne" in English.....afraid some wag will speak up, "Geshundeit!"

Should be pronounced "crone", n'est-ce pas?

Which, around your mother-in-law, could get you into trouble...

I googled it to find where to buy the tubers and mostly got a big list of real estate for sale there. Apparently this photo is a bit deceptive. But it does sound and look interesting to try.
http://media.oregonlive.com/homesandgardens/photo/crosnesjpg-3024c72e6dbcbff8.jpg

@LaFee wrote:No, MissM, the s is pronounced, but it's more of a "z", with the gutteral "r" in French.

Guess I need to re-sharpen my French. It has been a while...

I am remembering more of it now that I'm back in Cajun-land, though.

Getting ready to sign my kids up for French with Mango through our library system. They want to learn Japanese, too.

Actually, they want to learn Japanese, and I want them to learn French, because of our heritage and where we live.

Crosne and other unusual vegetables

Westie, thanks for your research, the website you posted is the article from The Oregonian newspaper where I first heard about crosne. Being a very curious person who always wants to try "the next new thing," it set me off. From what LaFee wrote, they appear a bit tiny to be of much use. Think I'll stick with the sunchokes we're already raising, and my new venture: Japanese sweet potatoes. Perhaps later try yacon and/or oca, all curious ancient tuber vegetables. Wonder if anyone else out there is raising unusual vegetables, hmmmm?

I have yacon and oca in the ground now. My first try, so I haven't even tasted them yet. I'm going on a recommend from another forum, so we'll see how it goes.

Thanks for posting, Odd Duck. Hope to hear what you think of your new veggies when you've had a chance to taste them. How large were the oca and yacon tubers you planted?

The oca ranged from tiny, about 1/4" tubers in clumps, to about 1" across and 1.5" long. I "bought" 3 plants, but they had to be shipped bare root and what I got was 4-5 large tubers and twice that many small and down to tiny tubers. I didn't try to separate them all, some were too stuck together so I just planted those in clumps. I figure when I harvest this fall, I'll be separating large and small tubers, save the smalls to plant and eat the large (at least, that's my hope).

The yacon was 2 plants, each tuber about 1" across at the fatter end, 1/2" at the skinny end, and about 3" long. I'm hoping to harvest about the same way, eat the largest, re-plant the smallest.

They all seem to be settling in and growing, so we'll see what I find this fall.

My family grew these in the garden (old-style SFG!) We called them “Denebian grub devils” (after the Denebian slime devils mentioned on a Star Trek episode.) Decades later I came across an article online and found out what they were really called. Chorogi is another name for them, and their scientific name is Stachys affinis. I’d tried to look them up before, but with no success since my dad didn’t remember the real name or where he’d ordered them.

Once I moved and had garden space, I started trying to acquire some. I finally someplace, but they were out of stock. So last year, starting in October, I had their page up in a tab and I checked it almost daily to see if they were in yet. Just before Thanksgiving last year I received my order (and stored it in my fridge.)

On 4/18 I planted 13 squares at 1/sq in my old-style SFG.  The plants look somewhat similar to mint, especially  when they first come up: 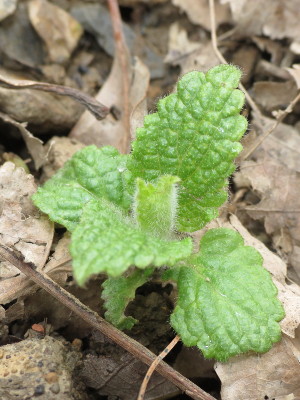 I pinched the tops a few times (pinching back to 6” once they are a 1ft was recommended somewhere.) They were not much bothered by bugs – a few grasshoppers and some 4-lined bugs. I thankfully did not have a problem with voles – I’ve had them before (and had at least one this year) – they purportedly like these. Here they are on 6/22 and a month later on 7/24. The plants in the middle of them are an arugula in front, and a buckhorn plantain in back (and my pole beans behind that.) 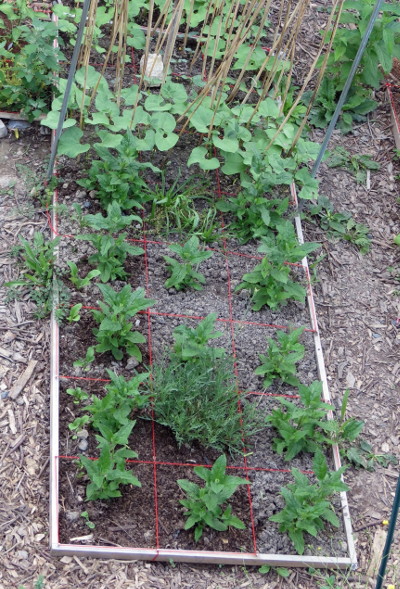 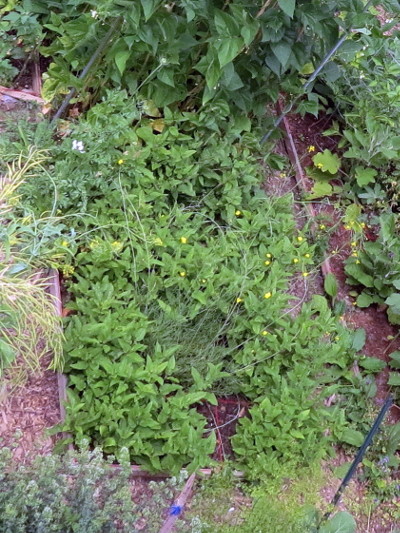 I harvested them after the plants were pretty much yellow, on 11/20. They are tedious to pick out of the dirt. Here’s a plant ‘peeled’ back to show the tubers: 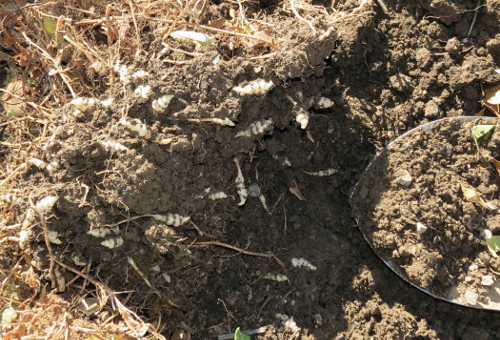 Companion plants says “3-5 dozen tubers per plant” so I should have hundreds, and I think that’s accurate: 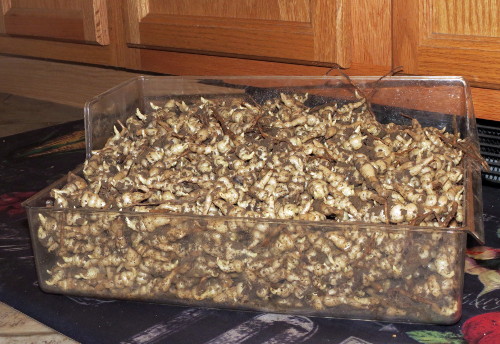 /\This is about 11-11.5 lbs (which includes the weight of the fridge drawer, and the remaining dirt.)

I’m storing them in a cooler in the unheated garage. Coolers seem to work well for maintaining high humidity. My parents will be happy to see these at Christmas dinner

– they were traditionally served then when they grew them. They are fairly easy to clean with an old toothbrush, although it takes a while to wash them one by one. We usually just served them steamed with butter and salt. 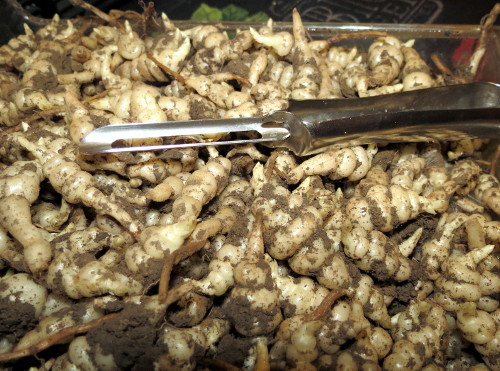 Although I used a peeler for scale, they are not peeled before eating.

I plan to grow them again next year,

I love growing (and eating!) unusual garden fare so as soon as I saw your post, Beetles, I knew I had to give these a go!
I just placed an order for some and they should arrive here Monday.  Cheers!

Never seen it before!  Wow!

Where to get crosnes tubers, pickles and other recipes

@GardenGal wrote:I love growing (and eating!) unusual garden fare so as soon as I saw your post, Beetles, I knew I had to give these a go!
I just placed an order for some and they should arrive here Monday.  Cheers!

! Some additional comments on growing these:
1. They are described as invasive. They did send out roots/tubers outside of their squares, and since my old-styleSFG is not raised, they were also under my paths, but
a. They did not travel as far as Jerusalem artichokes, and since they are much smaller, I suspect you can remove strays you find the following spring by just pulling them out. Jerusalem artichokes you need to dig out the piece of tuber because it won’t come out when you pull the greens, and will keep growing back (and because of that I do not put Jerusalem artichokes in my ANSFG beds.)
b. I suspect it will be easier to lift the crosnes out of the MM, and sift it with ones fingers to makes sure none get left behind. (And I bet MM-grown crosnes will be easier to clean than ones grown in dirt with sticky clay!)

2. I can’t do this with my plan next year, but I think a checkerboard planting pattern would work better – using the alternating squares for other plants on top, but expecting the tubers will be under the other squares, too.  I say this because there seemed to be a heavier concentration of tubers underneath the buckhorn plantain plant when I harvested. Those alternating plants would ideally be not-rooting vegetables (that you cut rather than pulling the rootball out for less disturbamce). So maybe greens like lettuce, spinach, mustard in the spring, followed by soybeans, bush beans, or pak choy. Or parsley or basil for the whole season.

Sanderson -
I got mine at Companion Plants:
http://companionplants.com/catalog/product_info.php?products_id=1330
I was happy with the customer service, but it doesn’t look like they’ve updated for the harvest this year.
Cultivariable has fall preorder: https://www.cultivariable.com/catalog/stachys/
(and all sorts of new to me stuff! )
Norton Naturals appears to have them in stock: http://www.nortonnaturals.com/product-p/ca.htm

, but not available until fall 2017? (I can’t read French):
http://www.lasocietedesplantes.com/?p=productMore&iProduct=351

Gardengal, where did you order from?

For hot California climates, I’ll add that I read that drought stress will reduce their yield, and that they are more likely to flower in hot climates. You don’t want them to put energy into flowers, so make sure to keep them pinched so they put their energy into the tubers.

I really don’t find them as ‘artichoky’ as the Jerusalem artichokes and I don’t know about safe home-canning practices for these.  I found these fridge pickling efforts, though none seem particularly like an artichoke marinade:
http://www.greenbasket.me/tag/crosnes-recipe/
http://www.foodrepublic.com/2016/10/13/what-are-crosnes-the-sunchoke-alternative-now-in-season/
https://stonecircles.wordpress.com/2010/07/10/pickled-crosnes/
http://www.gourmetsleuth.com/recipes/detail/pickled-crosnes
The Japanese pickle them with red shiso but I don't have a recipe (and my shiso didn't grow.)

I am glad too!  What do they taste like?  Potatoes?

@Scorpio Rising wrote:I am glad too!  What do they taste like?  Potatoes?

It's been a long time since I had them - I actually haven't had any of the harvest yet, so I'll update this when I do because I'm sure my sense of taste has both changed and I've gotten better at describing flavors. But my recollection is that, cooked, they had more of a sweetness (not that they were very sweet) than starchiness. Really I don't recall them being very flavorful.