May Avatar: Not Just Veggies! (click this)
Welcome to the Official SFG Forum
!!! Happy Gardening in 2020 !!!
Search
Latest topics
» TD Painting
by Kelejan Yesterday at 10:26 pm

» frustration
by Yardslave Yesterday at 12:29 pm

Well, it looks like I could not have picked a worse time to plant my fall crops. I looked at the weather after I planted instead of before and it looks like it will be quite hot for the next 5 days or so. Oh well, hopefully things will germinate. The hardest thing is keeping the top bit of soil moist. The sun is intense. I was thinking of trying to shade it for the next week or so.

Let me know if anyone else has already got lettuce, cabbage, etc started and how it looks in this heat.

Yes Chopper, I 'm with you ! the first day of fall?? ha , the week before when it was cooling down I got my first box done and planted broccoli and cauliflower and kale with some lettuce ! the sprouts are transplants and I am hoping they will survive this oncomming onslaught of heat. So far so good, this morn I put some screen over the box , the kind you use for your windows but it is black and cast a slight shadow , so I'm hoping it will prevent the direct sun from cooking them , you know how this sun is here! good luck girl ! lets keep each other posted.

I put together a temporary shade thing for the newly planted bed. It is a sheet over two 10' PVC pipes. I tied the ends with twine. Just a temporary fix.

Below are pics I took from my bedroom balcony. 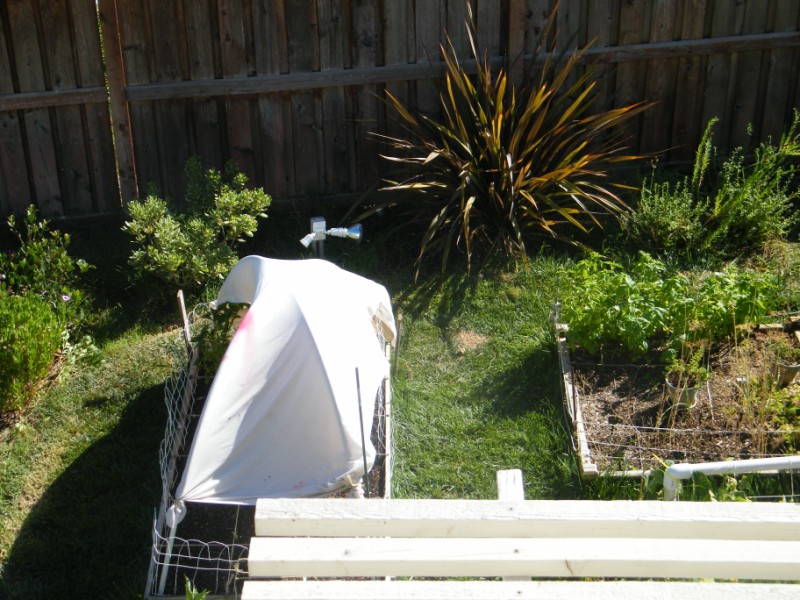 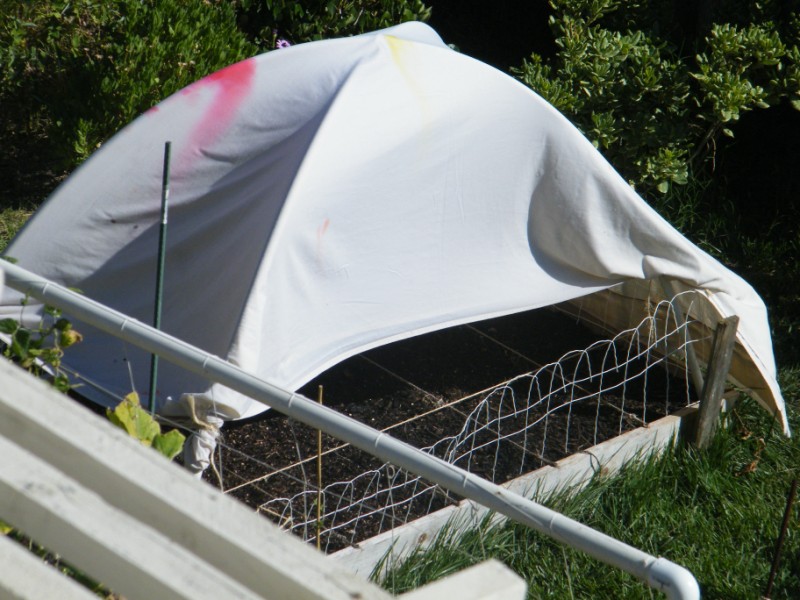 I put lettuce in a month ago and have been harvesting some for salads but today I noticed it a little wilty looking so I cut a bowl and rinsed it then to the frig, I just looked and it's all crisy again. I have new lettuce just out and I think I will shade it all for the next week. Going to be TDM (to darn hot) for them.

Works for me Chopper! just do what we have to to get through this heat wave and hopefully it will turn fall like soon.
Outsideasy, nice to know someone is succeeding in this heat! enjoy your salad !

Well Chopper, how are you faring in this record heat wave? I've lost 2 pole beans , 1 broccoli, 1 kale. A moment of silence for the fallen.....

I have been babying the garden. Twice or three times a day watering. Mainly because I have freshly planted squares I do not want to dry out. The tomatoes, which are almost leafless, are getting a tad sun-scalded. but this is the tail end of their production. I felt one yesterday and it is possible it has already cooked itself into tomato sauce.

The beets were looking none too happy, but they are tough. The only other thing that 'looked' stressed was a pot of mint. And I know nothing will kill that. The summer flowers, except zinnias, are looking like they are done, but that is to be expected.

In the meantime, two of the squares that I planted 5 days ago have sprouted. One celery and one beets. The last time I planted celery it took FOREVER to sprout so I think the heat and excess water actually helped. I planted a bit more than needed hoping I would get two or three to sprout and I have about a dozen instead. It will be hard to thin.

I pulled out a pepper plant after picking the last wimpy pepper. I have never gotten a pepper that wasn't more like a play pepper - thin-walled and small. I will ask about that on another thread...

So: could be worse. Today it is overcast so far and that makes a huge difference. And 90 feel like 70 or something. Practically cool.

yeah, compared to yesterday ! ha, sounds good you fared pretty well, amazing isn't it that sprouts come up in this heat ! glad to hear it !