After a rotten summer season, I decided to clean up and pull everything out of a few squares so I could put in fall crops like broccoli and cauliflower. Imagine my surprise when I found these kaliadiscope carrots and purple top turnips lurking under the surface. They were tiny but sweet.
arrrrrrrrrrrrrrrrgh unable to host an image.
Also harvested my first (maybe my last) beefmaster tomato. There are a few more on the vine, but just barely starting to lighten up. No color yet.

There are a few unidentified tomatoes turning pinkish (these were supposed to be tomatillos) Ha! These are kind of weird. The tomatoes are in clusters of about 6. But, two sets of two tomatoes are growing together, joined at the stem end. Sort of like Siamese Twins. Some have funny growths that look like appendages coming off the tomatoes. This particular tomatillo/tomato was a transplant from saved seeds started by a friend.
My tomato plants in 5 gal buckets planted in MM have produced at least some ripe tomatoes.

The tomatoes planted in my sfg with amended soil (not Mels Mix) like in the earliest book are lush and have lots of little green tomatoes. But the tomatoes are so small, I think very few will ever ripen. I got one Early Girl about a month ago, and nothing since from that plant. A few plum type tomatoes are actually getting light green so there may still be hope.

Bush beans are pretty much done. Spring/Summer broccoli is gone. Peppers never made fruit, nor did eggplant. Sugar Snap Peas came in early August and lasted till about two weeks ago.

One lemon cucumber is being picked for dinner.
One artichoke is ready.

Fall lettuce from transplants are doing pretty good. Just planted some Drunken Woman Frizzy Head lettuce seeds about 5 days ago along with some miniature pok choi that I plan to eat as baby plants if they come up in time. These are supposed to be 45 days.

Still unable to host an image. I must be suffering from brain burps. I will try again later.

Still unable to host photos, but if you go to my personal gallery, I was able to upload a few pictures there.

Boffer You are the Man! Boffer helped me post my pictures

Here are a few pictures of my harvest on 9/13
Kaliadiscope (sp?) Carrots, Purple Top Turnips and very few yellow and green beans
The carrots are white, yellow, orange and purple.

LOL I think I didn't do a very good job! Your thumbnails link to thumbnails!

I noticed that in your personal gallery some of your thumbnails linked to thumbnails and some to full size pics.

Do you have an image program on your computer that makes thumbnails? Could that be what you uploaded?

A red tomato that big on the PNW coast this summer! I wanna see it full size!

Having problems with the photo program on my laptop, which is much faster than this old PC
Please excuse the out of focus pictures, I was also using a new lens and haven't got the focus down yet.
First Ripe Beefmaster 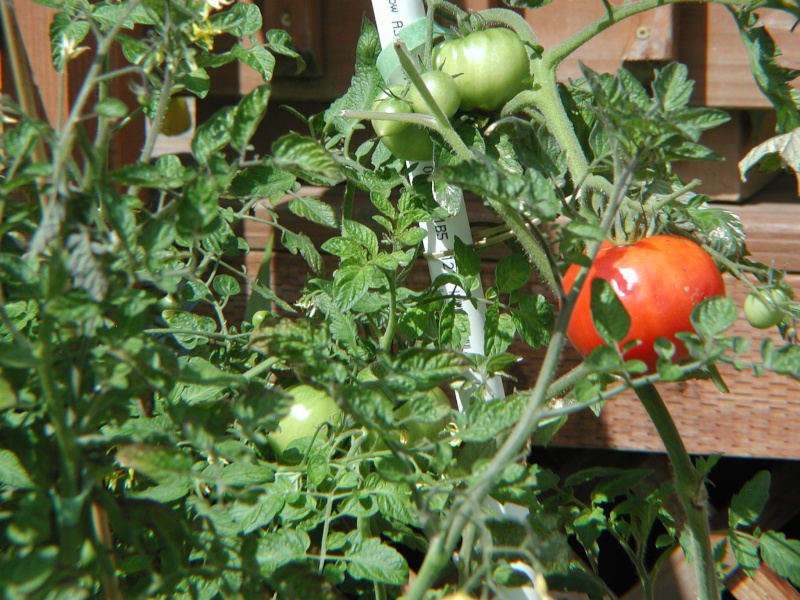 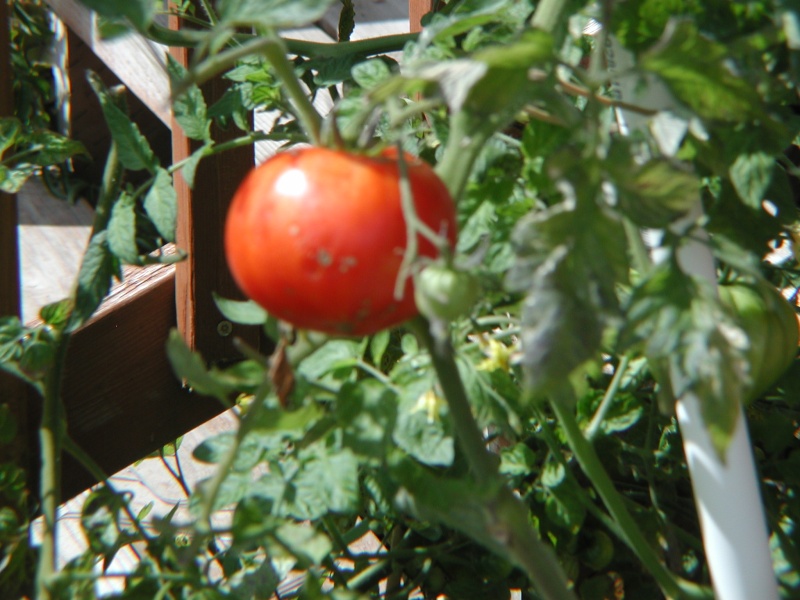 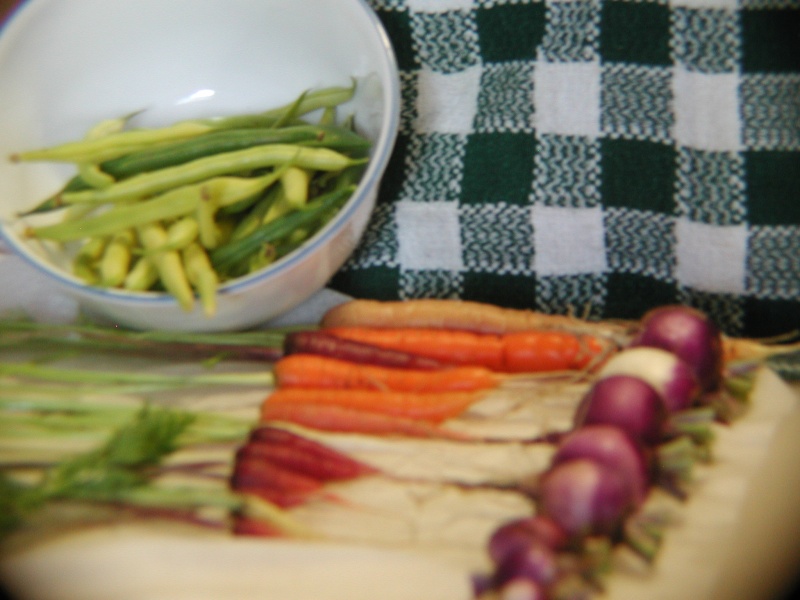 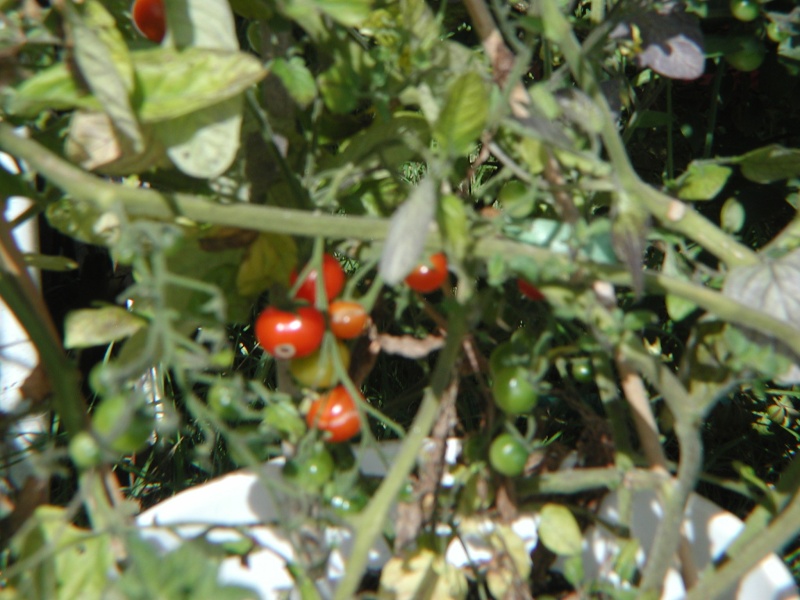 Green tomatoes still on the Beefmaster 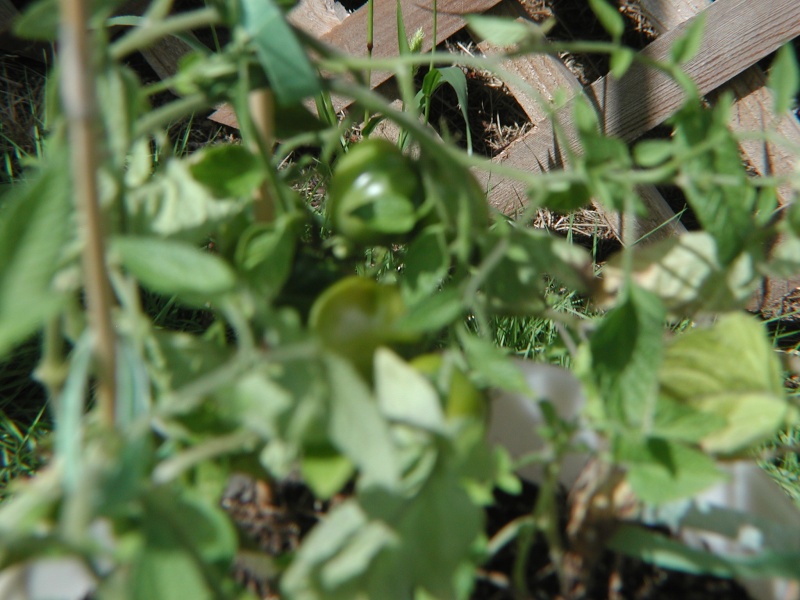 ...and you managed to take pictures on the one day of summer this year!

Boffer, Thanks for the support. I went out today and took a few more pictures. Finished my fall planting transplants of sugar snap pea starts, red admiral broccoli (supposed to overwinter?) green broccoli, and red cauliflower. Previously transplanted Baby Freckle Face lettuce, Yugoslavian Lettuce (starting to bolt already, it's certainly not hot, I think the starts were a little too old). Last weekend I seeded Drunken Woman Frizzy Head Lettuce and some baby bok choi in large bowl shaped pots on the deck. I love MM in containers.
Forgive the weeds, these are in my sfg based on amended soil from the original book. Working on 4X4s for MM and using MM in all of my containers. 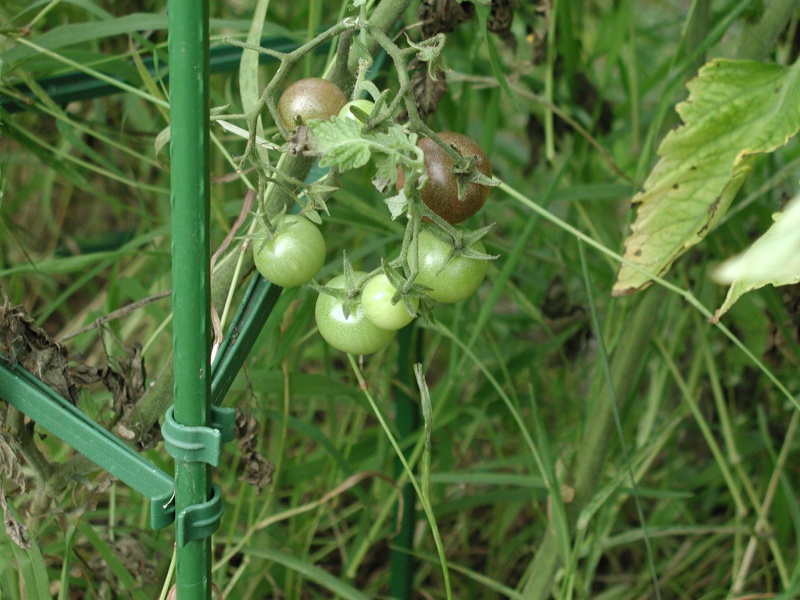 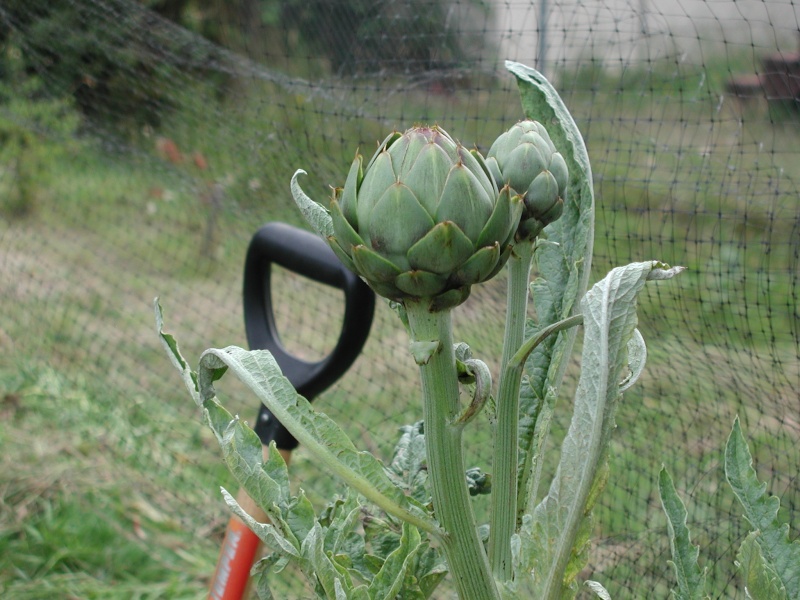 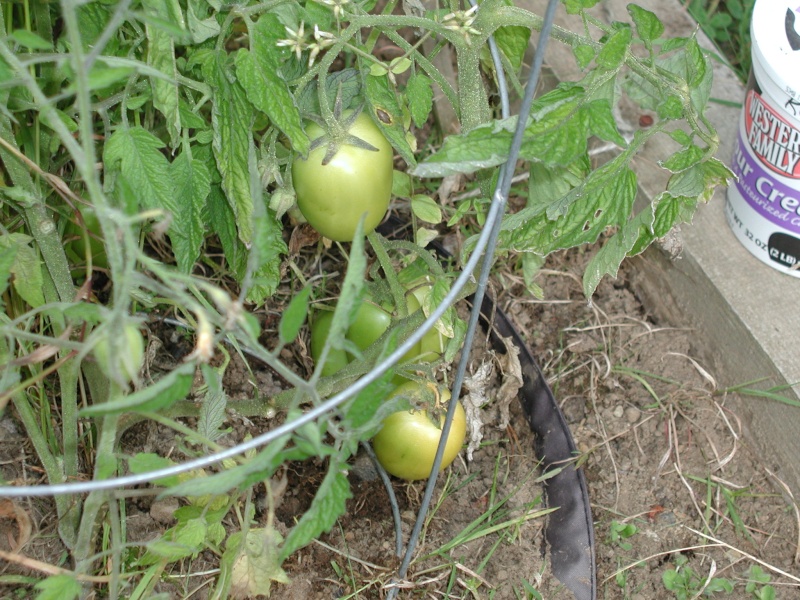 oooooooooh, artichokes! WIsh I could do that!

How old is that artichoke? I have some seed that I bought on impulse, but after I saw how long they took to grow, I hesitated. When should I plant them?

I'm surprised more folks don't grow artichokes. I planted these chokes in April from starts. They're one of the few things that did well for me this year despite the lousy weather. To quote Josh: "If I can do it, you can do it!" Our fruits never get as big as the store bought. We grow them for the beautiful flowers that the bumble bees love. 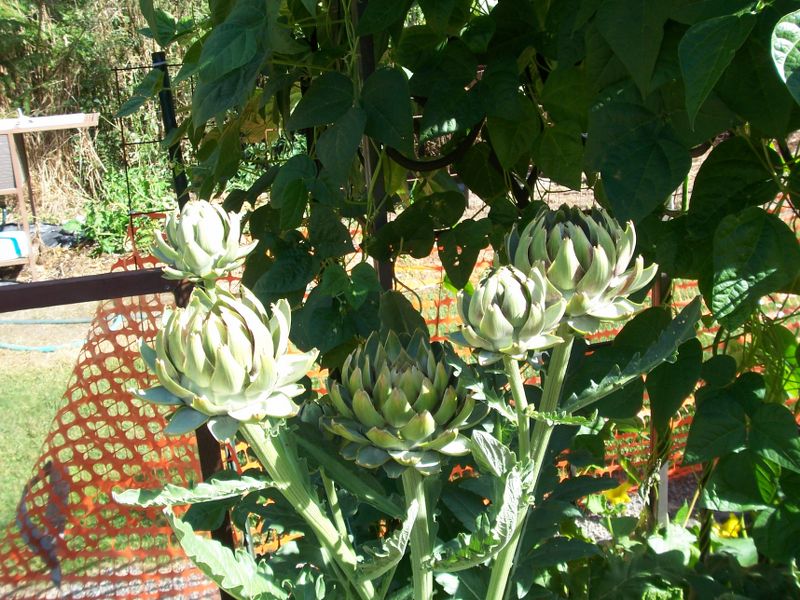 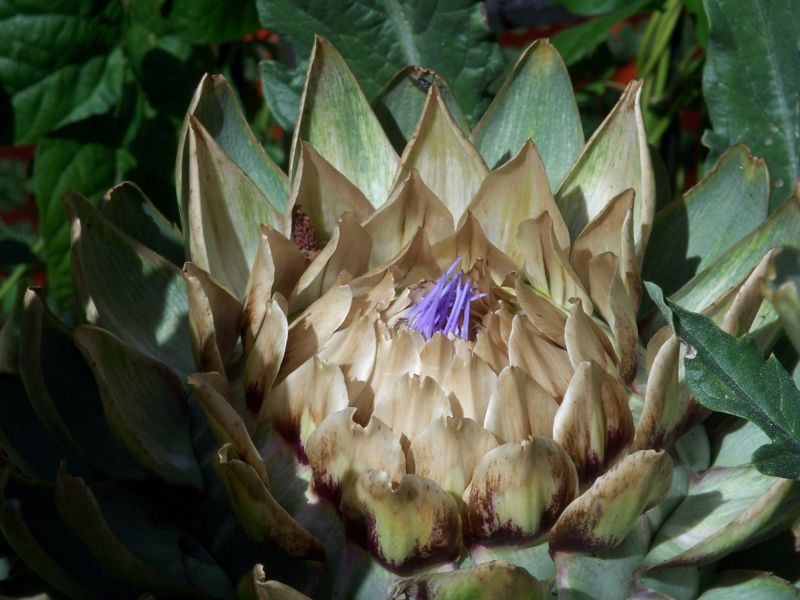 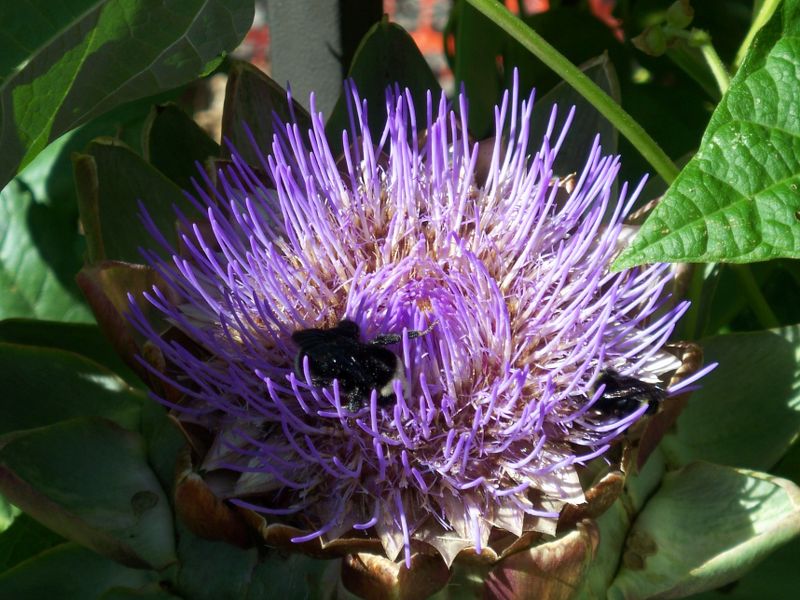 OK boffer, after seeing your pics, I'll give them a try...

Squat, my artichokes were from starts purchased at Territorial Seeds in Cottage Grove, OR, I live close enough (80 mi or so) that I go by there a couple time a year. I planted my starts in early May. These are Globe Artichokes.

I also ordered some seeds from them just recently to try. The variety is Violetto, which has purple bracts and a small oval head.

The package says "Direct sown plants may not mature the first year in zones 6 and lower" So, the recommendation is to start seeds indoors in 4 inch pots in late January or early February,(10 - 20 days for germination) transplant outdoors 8 weeks later, when soil has warmed. Also states "Due to genetic make-up, about 20% of artichoke plants from seeds will be useless, so cull smaller and albino plants at the time of transplanting.
Glad you are going to try them Squat.

Camprn, perhaps you could try from seeds. If you are frost free from sometime in April through mid to late September, they might work. These are considered perennial, but I am not sure through what zone. You could try to overwinter by cutting back after the first frost and mulching with a good layer of straw.

Boffer, I love artichoke flowers, but I am too anxious to have really fresh artichokes for the table. I don't want to miss that treat and leave them on the plant to flower.