October Avatar: Fall Gardening!! (click this)
Welcome to the Official SFG Forum
!!! Happy Gardening in 2021 !!!
Search
Latest topics
» The SFG Journey-Johnson Su Bioreactor for composting, No turning
by has55 Today at 5:24 am

Potatoes...Any idea what I did wrong?

(sorry, these will have to do-every dancing potato that I've seen looks like a dancing do-do)

congrats-I know they'll be good-my cousin in Boise swears they ship the good Idaho potatoes out of state!

Potatoes and other root type crops like carrots and beets, don't really 'ripen'...they can be eaten at any size.

Thanks boffer....I"ll git'em in a pot right now! My daughter is jumping up and down with glee over purple mashed potatoes! I am so excited....this whole gardening thing makes me feel 10 again....I so cannot wait until next year...prayerfully summer will not take it's sweet time arriving and then book it before Sept 1st like it did this year!

WOW, those look fantastic Middlemama.... well done!!! I bet they will be ever so delicious, too. That harvest thing makes me feel 10 again too. Enjoy your taters! I can only hope my harvest will be half that good.

Megan, I bet yours will be GREAT! 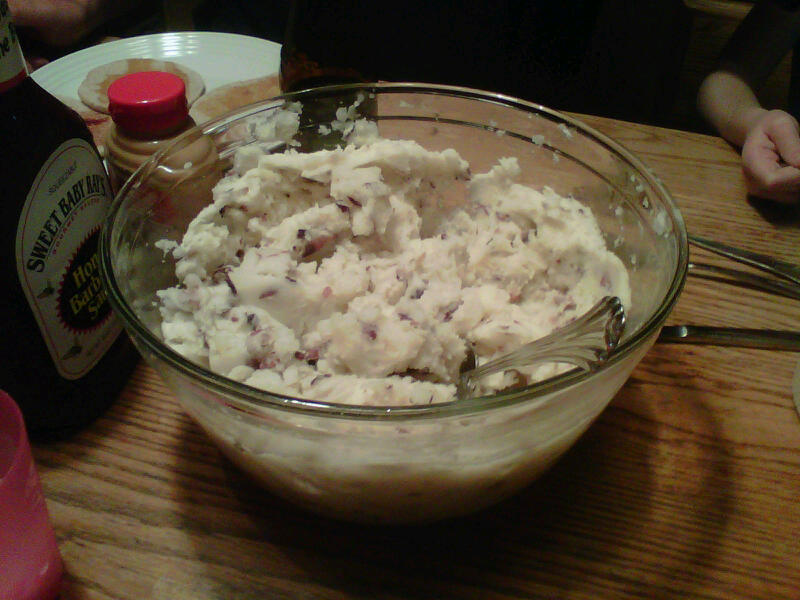 And they do have a pinkish tinge. Isn't it odd that all the containers looked the same and one just didn't pan out. I am sure there is a lesson here. I think it is: S**t Happens.

Oh my gosh, does that look completely delicious!!!

I hope mine look even half as good as yours!

One note while I am thinking about it, and you may already know this: If you are not going to eat your taters right away, don't wash them. Just tap off the excess dirt.

I was feeling guilty for having such a great harvest of potoatoes, we replanted and the second crop is growing good.

Wow, looks nice, Josh. When did you replant?

The first potatoes we planted on St. Patrick's Day and harvested the last of them at the end of June.
I replanted right away so it would have been around the end of June or first of July. I don't know how they will turn out but we still have some time left for them to grow.

Next time I am definitely planting more potatoes. I don't care how cheap they are at the store!

I'm back with more on the "no potatoes" problem

Thanks for all of the feedback on earlier posts about my very beautiful potato plants that produced next to no actual potatoes. Now, after more research, I have new questions.

1.) Although I had very healthy foliage, I had absolutely NO blossums. Does that help anyone with what might be the problem?

2.) I used Mel's mix all the way, with very nitrogen-rich compost. I'm told that might be a real problem. (stand by for related question)

3.) I'm also told that I should not plant potatoes in the same soil two years' running. Does that apply when I never actually produced any potatoes?

If my Mel's mix being too nitrogen rich was a problem AND I'm not supposed to use the same soil twice does anyone have any recommendations on how I might treat the Mel's mix to get a better product? What I mean is this. These were "build a box" planters. Once the potato foliage got to be 3-4 inches high, I'd add more Mel's Mix. Once each 2x6 was full, I'd add another. When I "harvested" (bah, hah, hah), I took apart the bins one level at a time and stored the Mel's Mix in a big dark plastic container. Is it possible that I could use that same soil, but mix it with something else to make it less nitrogen rich and eliminate whatever the problem is with using the potato soil twice?

Sorry. That was a long one. Can anyone help? I'm determined to be ready when March rolls around to try again!!!

It's quite possible if your mix was too nitrogen-rich, your potatoes put all their growing efforts into tops rather than tubers.

What variety did you plant? When you grow in towers and continue to pile on soil, I have seen others here say that you should plant late-season varieties. Early varieties produce tubers only once and then no more regardless of how much soil you pile on top. Early varieties do better when all the leaves are allowed to remain above ground and perform photosynthesis.

The reason you should plant only certified disease-free seed potatoes, and why you should not plant potatoes two years in a row in the same soil is because you can perpetuate diseases. (It's not just potatoes, but growing any member of the nightshade family there should be avoided including tomatoes, eggplant, and peppers.) A four-year rotation should allow any diseases specific to those plants to disappear from the soil. If disease is introduced into your Mel's Mix I know of no way to make it disappear any faster than from regular soil. It doesn't matter whether your plant produced fruit or not. The disease can still be there just from growing the plants. For instance, late blight is caused by a water mold. It infects the leaves which in turn affect the entire plant, even the tubers. The mold releases spores which then fall onto the ground (or are washed down from overhead irrigation or rain), and any potato grown there within the next few years will likely be infected. You can also transfer the spores to other areas if you get them on your hands (while picking potato bugs, for example) and then next pick a tomato or pepper, or if you walk where the spores have fallen and get them on your shoe and then transfer them to another part of your garden.

If you saw no signs of disease, I doubt that was your problem. Most of the diseases are visible in some way - spots on the leaves, rot or scab on the tubers, etc. My best guess would be either you used too much nitrogen, or you chose the wrong variety for your growing method. If it was too much nitrogen, then the plant took up some of that nitrogen while growing so it shouldn't be as big a problem next time. To be safe you might want to grow a crop next that uses lots of nitrogen.

I had lots of flowers, but still no tubers. I think my soil was too rich??? Don't know. I will try again next year.

Plan ahead, and do not plant potatoes in soil to which manure has been added for at least six months. Based upon this information, it would seem that your soil was too nitrogen-rich.

The two varieties that I tried in the towers were Fingerling and Russets. Maybe not good ones for towers? I'll have to research that.

Another question about the soil that I used last year for the potatoes. First, thanks so much for the explanation of why it shouldn't be used one year after another. This is likely to come across as a really stupid question, but here goes just the same. Is it that NOTHING should be planted in soil following a nightshade veggie or is it just that a nightshade veggie shouldn't be planted in it. I'm developing one big pouty lip thinking about those two 4x4x5 towers full of Mel's Mix going to waste for several years. But if that is what I need to do, then by golly I'll do it!!