» Using misters
by OhioGardener Today at 7:32 am

» What are you eating from your garden today?
by OhioGardener Yesterday at 6:03 pm

» Winter ponderings about my Mel's mix
by sanderson Yesterday at 12:52 pm

Aside from plopping a few tomato plants along the south side of our house last summer, this is our first attempt at a real vegetable garden. Back in February, I picked up Mel Bartholomew's book at Lee Valley, and couldn't wait to get started (granted my patience were tested because gardening season was still MONTHS away here in Alberta). We took it upon ourselves to make this a "freecycling" project as well, partially for the challenge, and the other part necessity.

So, while it doesn't follow the exact rules of the SFG formula from the book, it is heavily inspired by it!

The project began in April. Our boxes are actually re-purposed shipping crates from my boyfriend's work. They are 3'x4' boxes made of quarter inch plywood, with fairly heavy duty hardware. They are approx 2 feet deep (I haven't actually measured this). These crates came with a pallet lid, so that is what they are sitting on. We lined the boxes with discarded silage plastic from the family farm, and brought home 3 truck loads full of the finest buck skin/soil the farm had to offer. 1" holes were drilled in the boxes/plastic for drainage before we put the soil in. We also drilled holes in the sides at 12" intervals in order to weave the rope we used for our square foot markers.

So aside from the gas used to transport the boxes and soil, to this point our project had been FREE

These photos are from the beginning of May, and I will post some current photos later on today, after I get outside to take them!! I am definitely open to any and all advice or opinions you seasoned SFGers have to offer. Thanks for having a look! 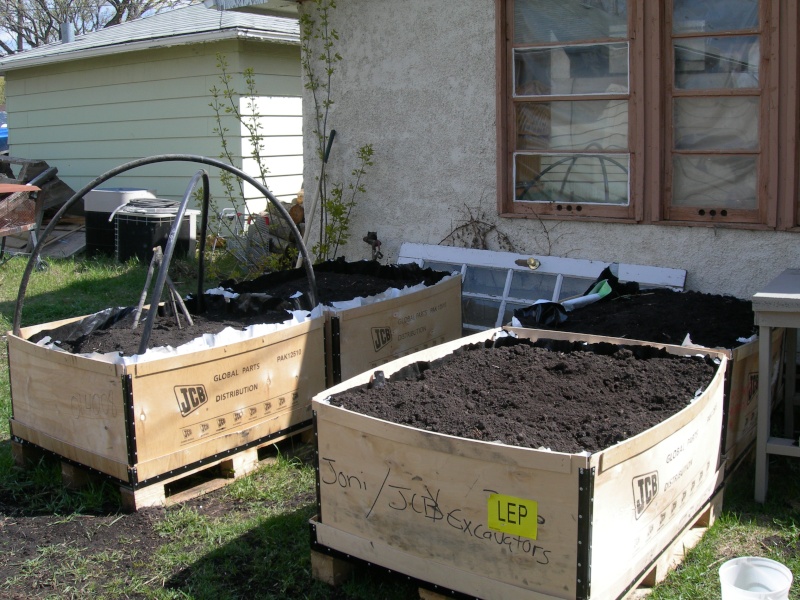 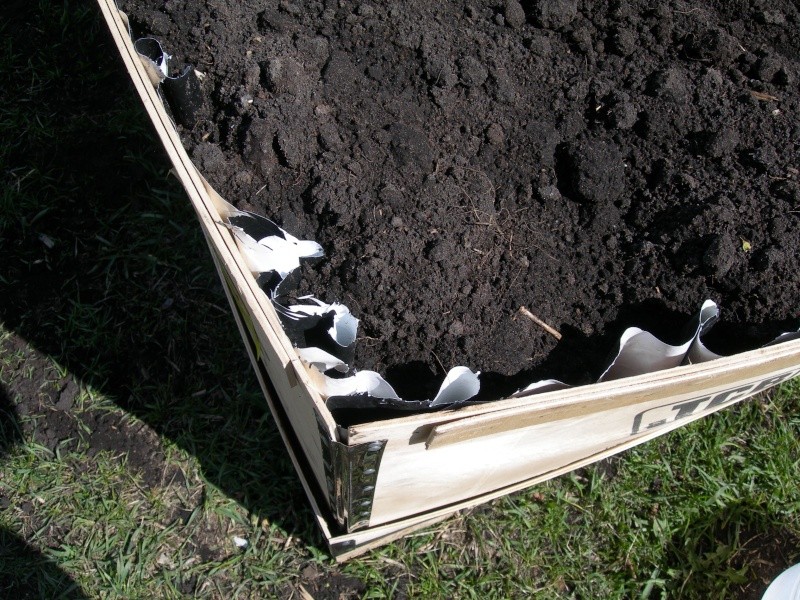 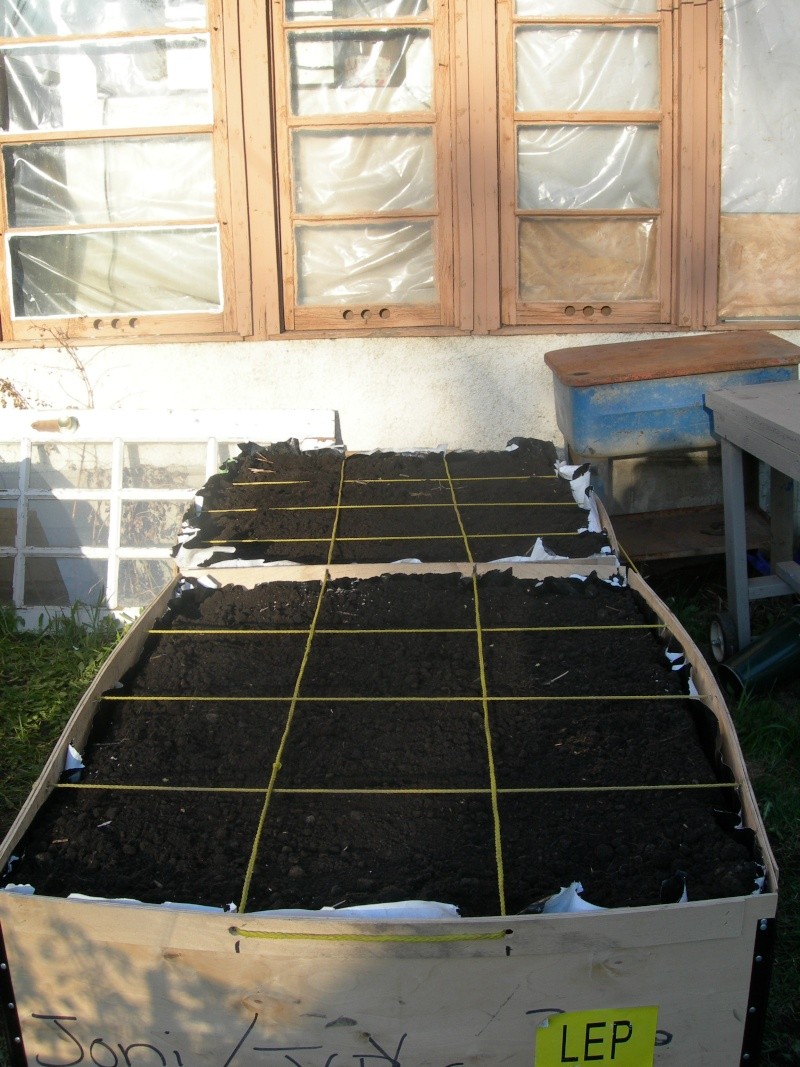 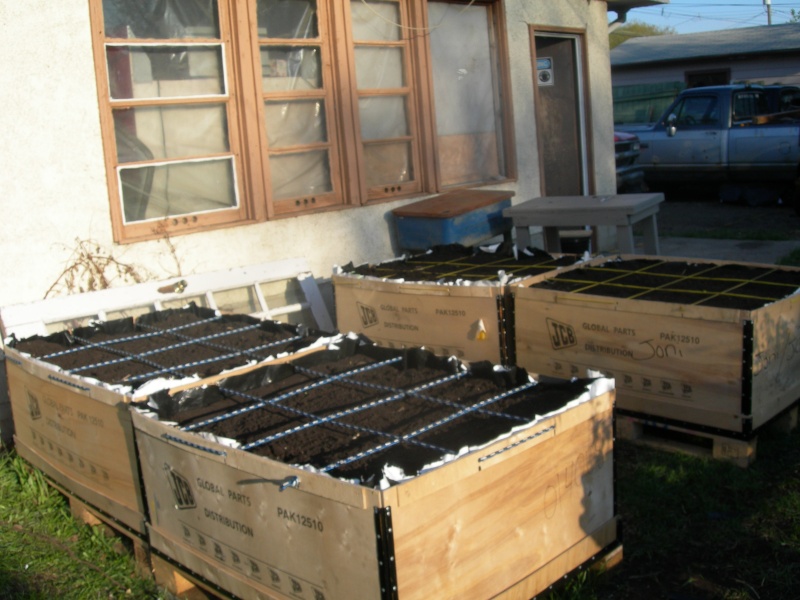 So here it is today! 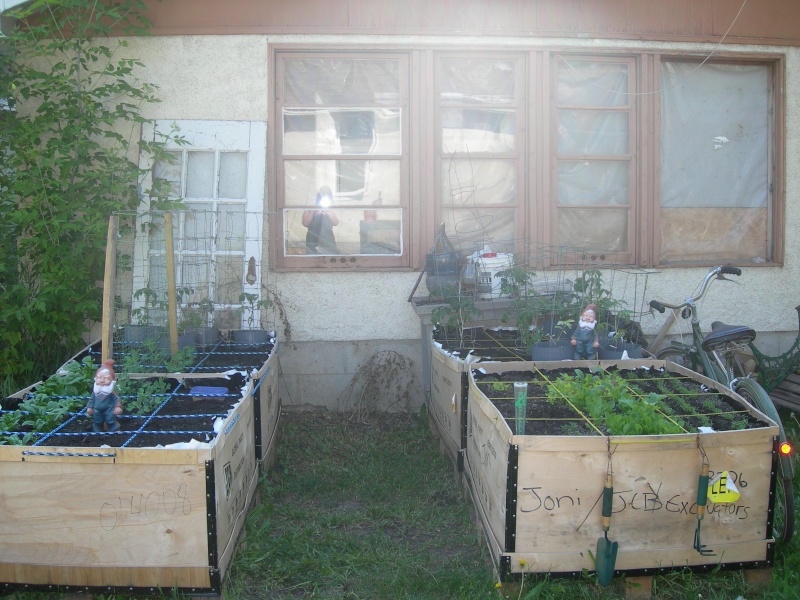 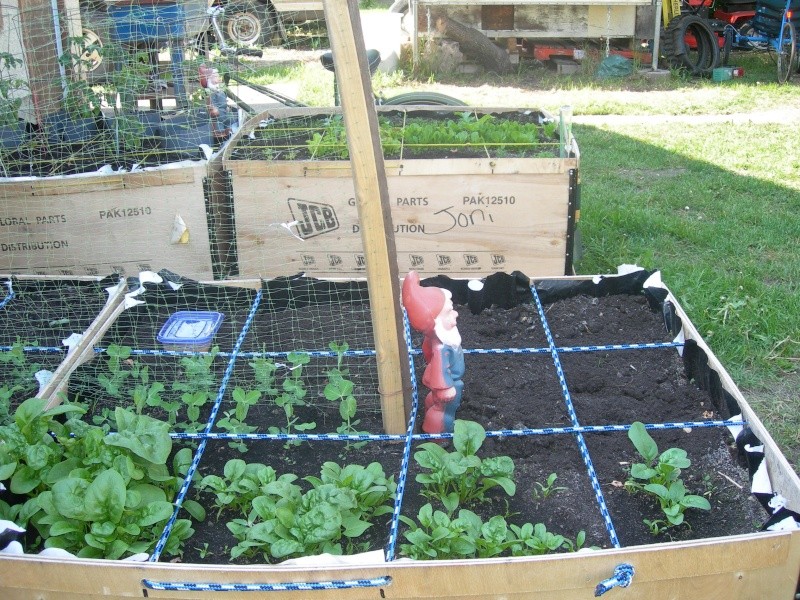 Spinach and peas, and some yet to be determined empty squares. 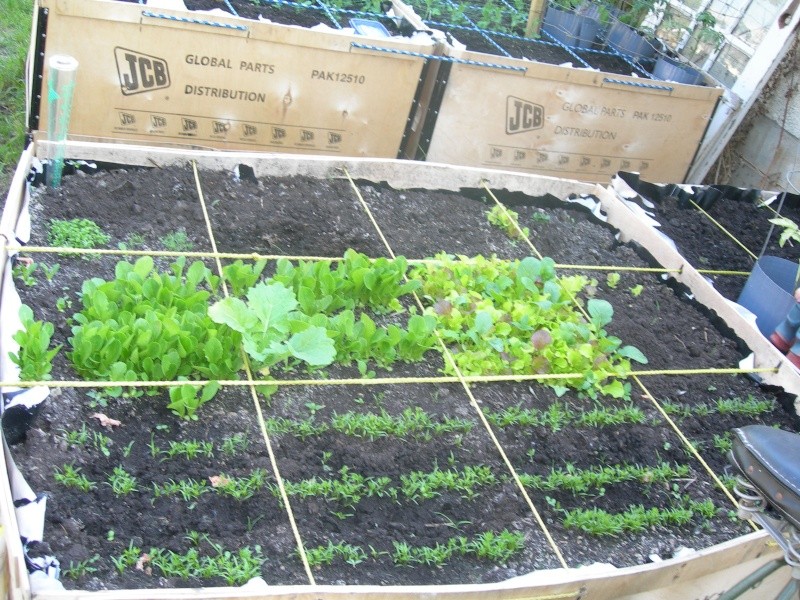 A few varieties of lettuce and carrots. Herbs coming up slowly in the background (behind schedule, they're our second crop...the first ones were put in too early and lost to Jack Frost) And a few potato plants...although I'm a little wary that they might grow TOO big for my boxes. I won't count my chickens before they hatch though, as they're just starting to come up. 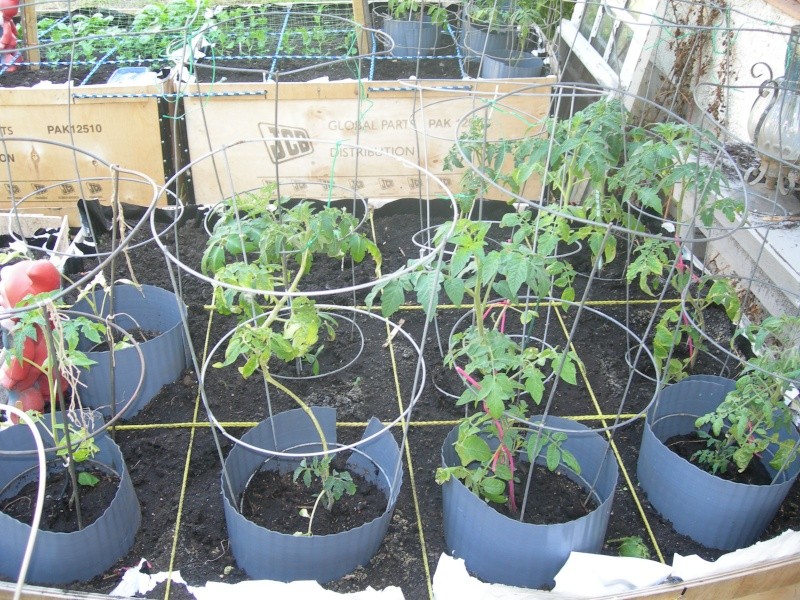 Tomatoes (I'm not sure which ones are which type, as I had a small disaster when I started them from seed...the trays I started them on were tossed over by a very curious dog) 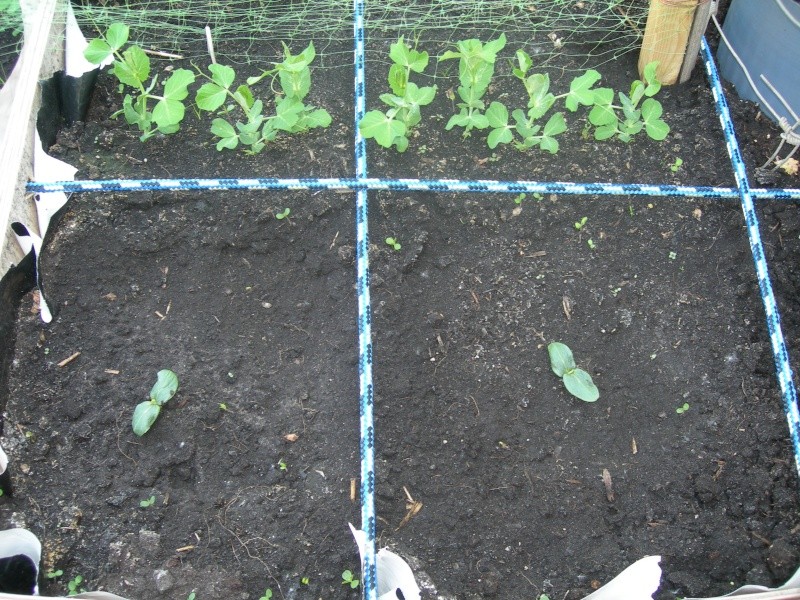 My little cucumbers that could (again, the second round of seeds, lost the first ones to late May frost) 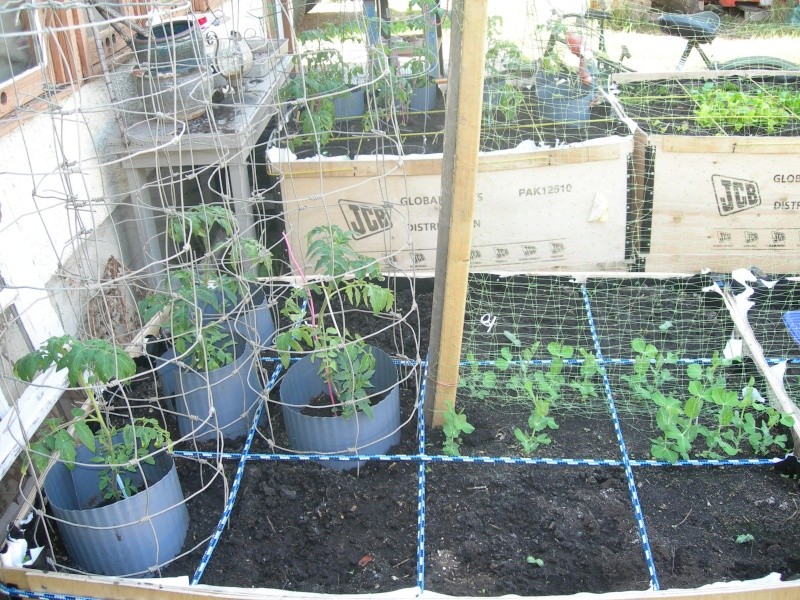 Some more tomatoes in our home made cages 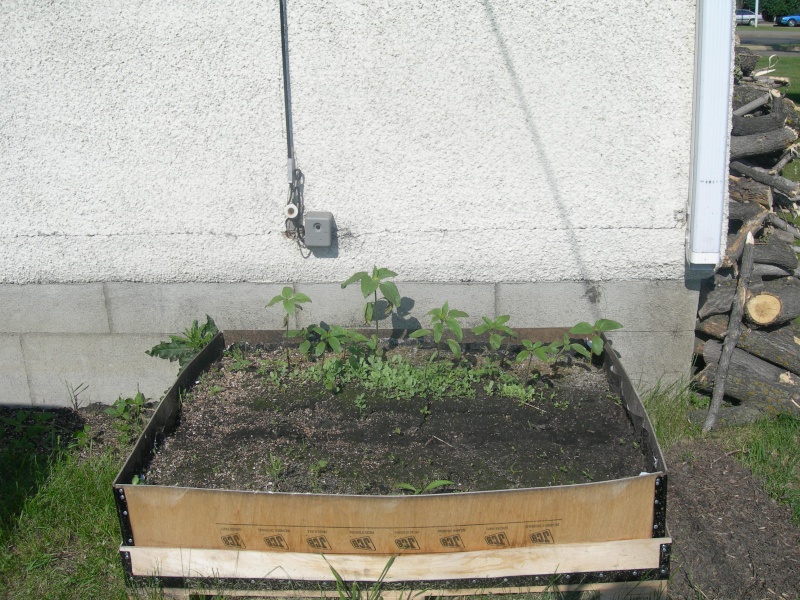 This little SFG was an afterthought. We threw in a variety of sunflowers and poppies, and are hoping they will take the attention off the unsightly cable lines going into the house.

So to keep with our freecyling theme:
*The netting for our peas was left behind in the garden shed by the previous owners. It's a little worse for wear, but still doing its job.
*Some of the tomato cages are my Grandma's leftovers and generous donation!
*The rest of the tomato cages are home made from page wire fencing we found at the farm.
*Even our garden gnomes were free (can you imagine?!?!) Somebody tossed them away in the parking lot at Costco. Tacky yes, but we couldn't resist.
*We spent about $15 in seeds

So we still have some empty squares. I plopped some zucchini seeds a couple yesterday, but I wonder if it's too late already? We might bite the bullet and purchase a few plants from the greenhouse to fill up the rest of our empty squares. Maybe some peppers!

Now that everything is starting to come up, I'm realizing our boxes are somewhat of an eyesore (putting it mildly). I'm hoping to give them a coat of paint in order to pretty them up just a little!

I love this garden!!! Look at all that soil for your root crops.
I also like freecycle. Almost all of my garden is made from leftovers and donations to the cause.
I just harvested my worm farm, and came up with over 10 lbs of vermicompost to add to my gardens. The worms were also from my local freecycle.
Great Job!
Happy gardening

I love your gnomes and I love your shipping crates! I was actually drooling on a couple crates like that last week as I drove by every day but never had a chance to stop and ask about them and then they were gone!

What a great garden story! I really like your bungee cord grids.

I tried my best also to freecycle where I could. It really is surprising at what things you can find out there.

Yeah I lost a bit there with the frost/snow and then all the rain mixed in there.

I can't believe someone threw out some gnomes... oh well your treasure now and they look great.

I just wanted to add, for those who may not know, that 'freecycle' is group on yahoo! - as well as a way of life lol.

It's a great place to find free stuff to make your SFG!

You can find your local group by doing a freecycle search at groups.yahoo.com, as well as entering your location information at www.freecycle.org.
It's easy, you can post a 'wanted' message if you are looking for something in particular, or an 'offer' message if you have something that you are trying to get rid of.
I have received a dog door, a starter set of red wiggler worms, several plants and tree seedlings. I 've given away old plastic easter eggs, packing peanuts and a bunch of other stuff that I didn't think had any value.

is made up of 4,810 groups with
7,245,000 members across the globe. It's a grassroots and entirely
nonprofit movement of people who are giving (& getting) stuff for
free in their own towns. It's all about reuse and keeping good stuff out
of landfills. Each local group is moderated by a local volunteer
(them's good people). Membership is free. To sign up, find your
community by entering it into the search box above or by clicking on
“Browse Groups” above the search box. Have fun!

For those of you that work in a large office or plant, you can use freecycle@work - "It's like carpooling for your stuff"

Thanks for the feedback!!
I'm hoping those crazy gnomes are going to help watch over our garden!

dmpower - Thank you for posting that freecycling info and websites, I did not know about that network at all!!! I just heard the term freecycling, and thought it matched the way we do things around here, but didn't know there was a whole network devoted to it! This may be a whole can of worms you've opened up at our house. (Maybe freecycled worms

Oh, and PeggyC...If you're looking for some shipping crates, stop by any mechanical or industrial shop's shipping and receiving department, you'd be surprised how often those things come in, and often they are more than happy to give them away to someone who can use them!

Thank you for the reminder of freecycle. I tried to join in the last place we lived and for some reason was denied, so gave up on it. Just tried here in our little town and got right in. Maybe I can expand my garden operation without spending another fortune!

That is awesome. I could totally work with only paying what you did for everything thus far. I'm already researching cheaper alternatives for next year, as I only found this book/place/SFG well after I had already been planning and had planted completely. I love the gnomes, awesome find, those things aren't cheap!

The gnomes are my favorite!!!! Great job. Never would have thought to use crates. Love it!

Some photo updates of our Freecycled SFG

I took some photos of our SFG this evening. I guess it's a bit over a month since I took the last ones. I love being able to see a timeline of how it's growing 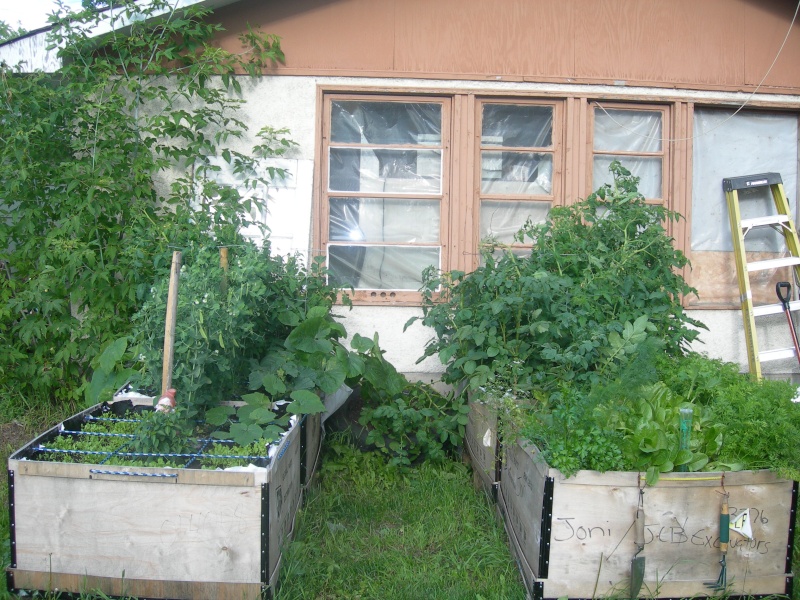 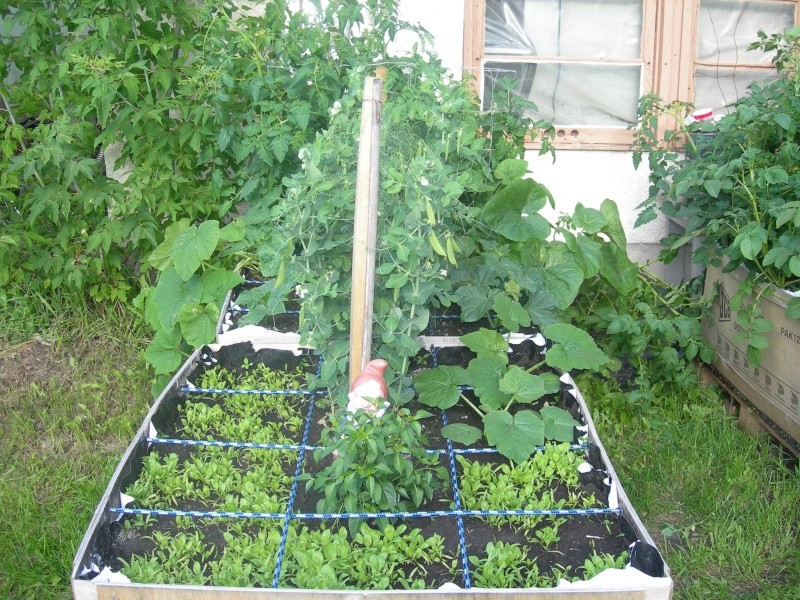 We are onto our second batch of spinach now. Next year I'm growing WAY more...half of it ended up on ONE SINGLE pizza. 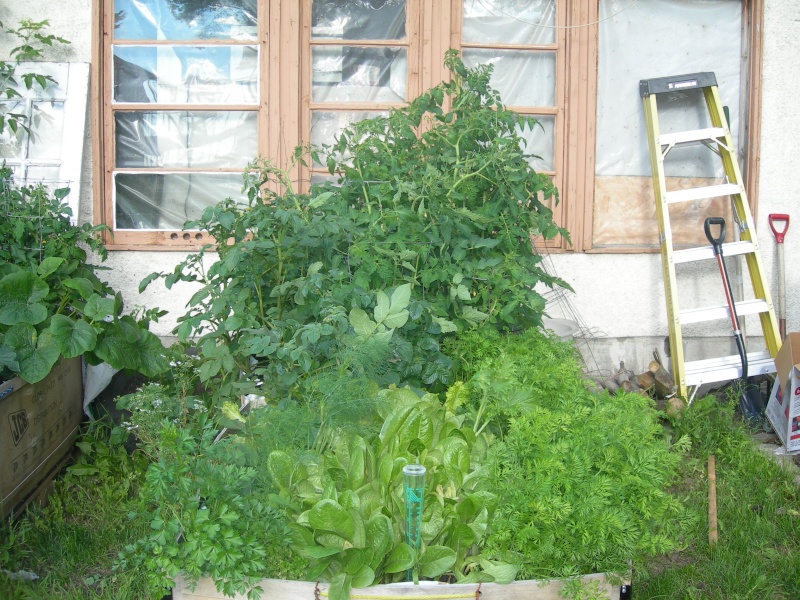 The tomatoes in the back are growing pretty wild. I will have to search for the fruit, but it's in there! 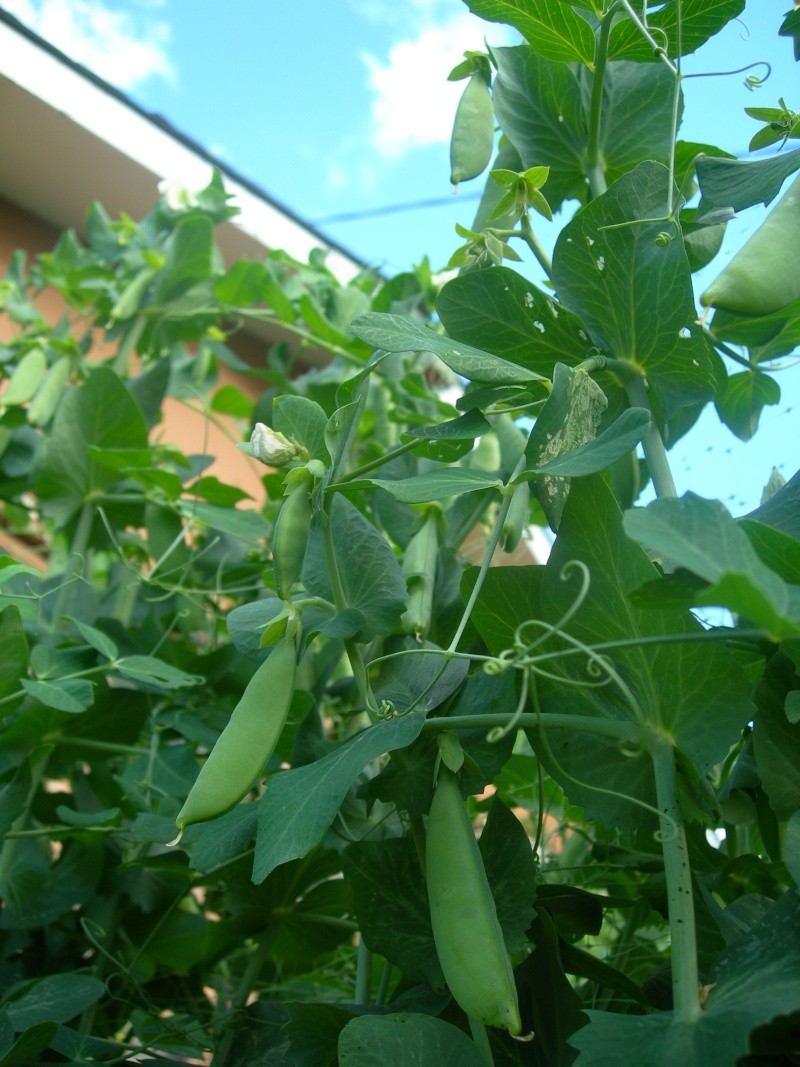 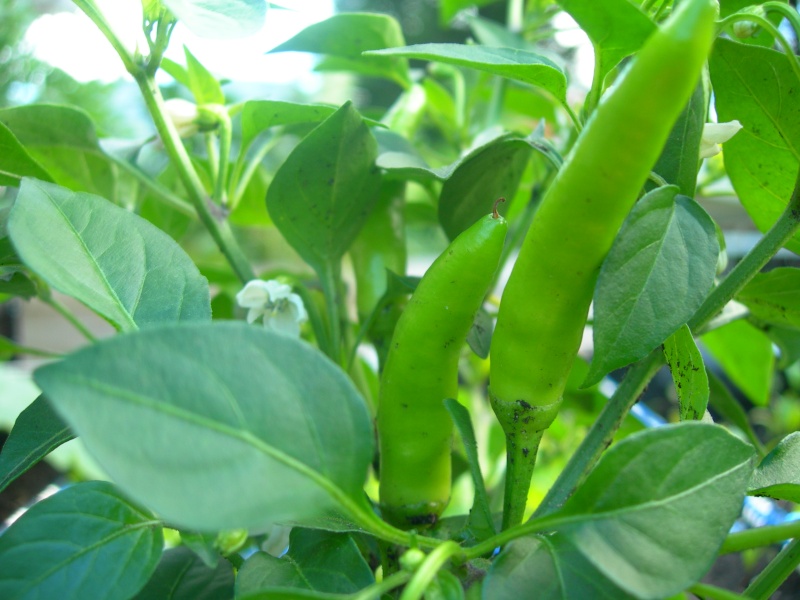 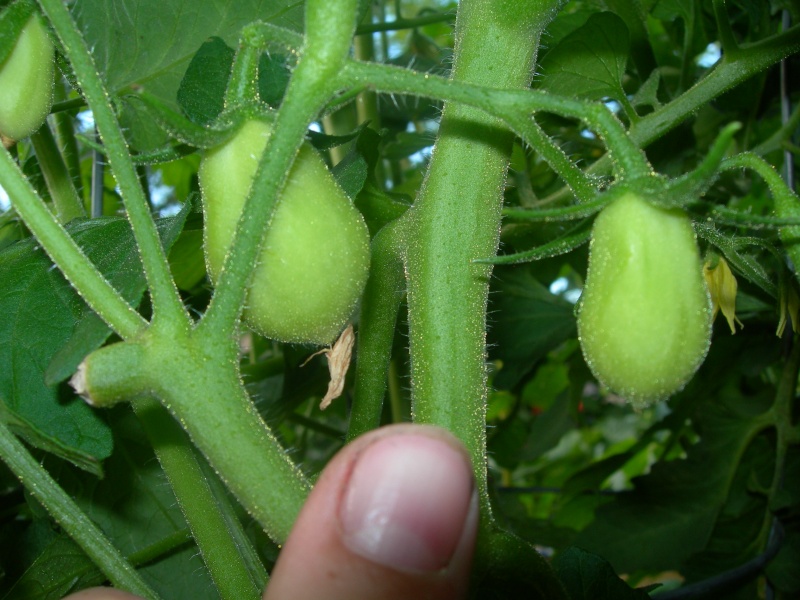 Roma Tomatoes (I'm only now learning which breed each plant are, since they got mixed up when I planted them. 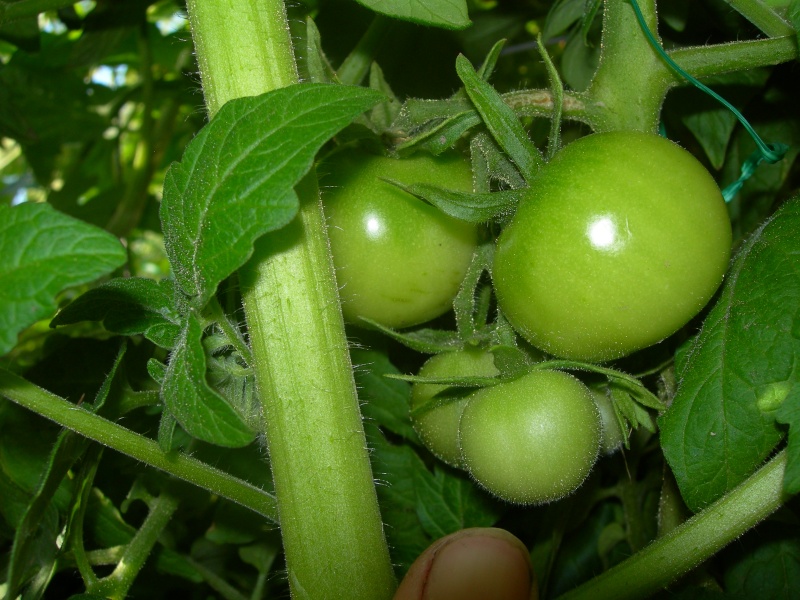 Another yet to be determined variety of tomato.
. 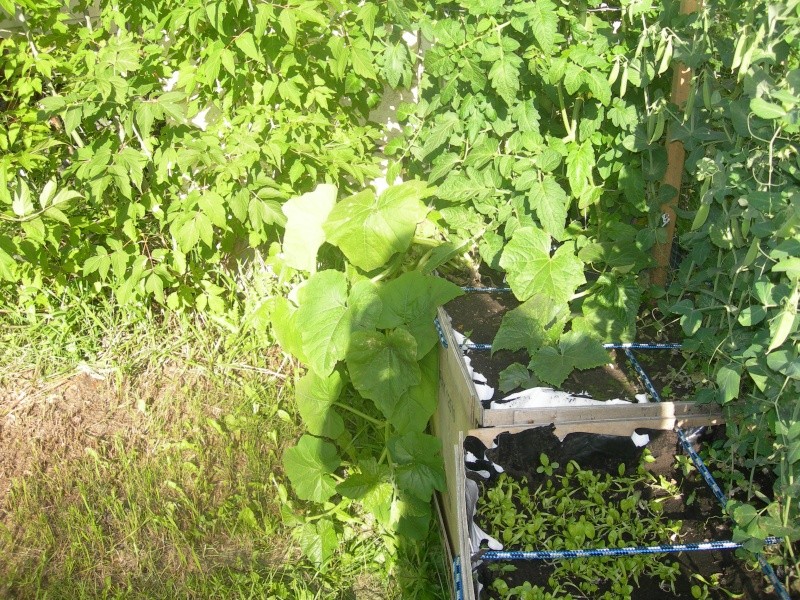 The pumpkin is quickly becoming a mowing hazard 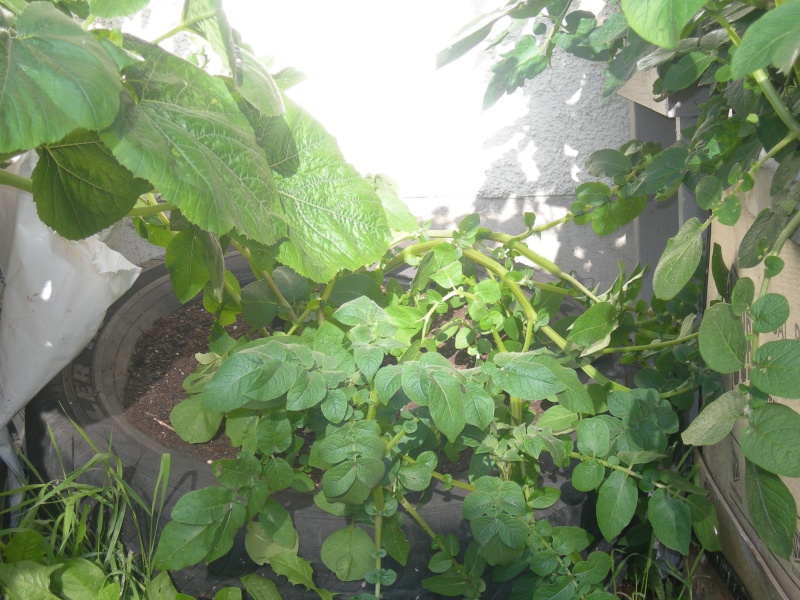 We had more potatoes to plant than square feet, so we popped a few extras in this old tire with some peat moss. 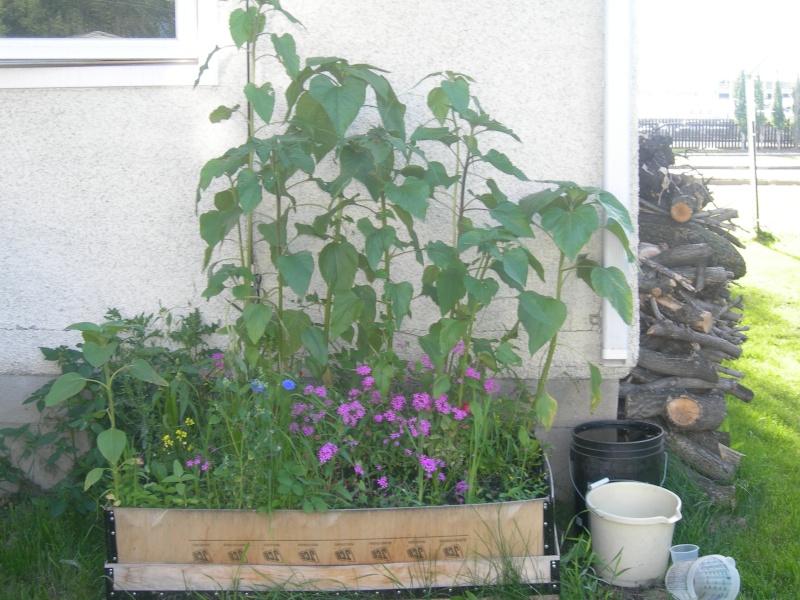 I can't wait for the sunflowers to bloom! There were some really pretty poppies in there up until a recent storm took away their delicate petals.

And even though it isn't SFG related...

...I couldn't help but post this photo I snapped this weekend.
Check out this beautiful Alberta sunset. 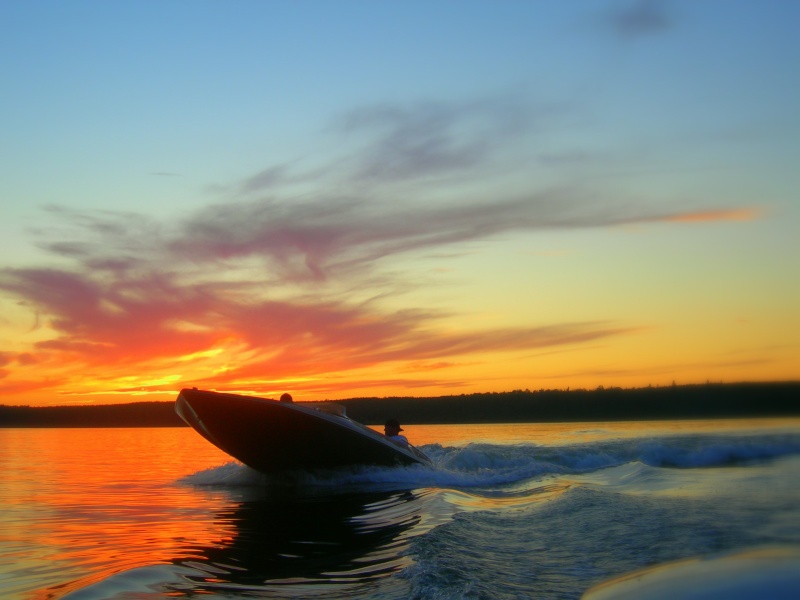 Wonderful garden !!! Your dirt is georgeous !! I bet you have bumper crops in there!!

The soil in the boxes has been fantastic. I have tomatoes along the side of our house too with just a little store bought top soil, and it doesn't compare to the soil we brought home from the farm!