My compost for next year isn't going to work out. So I would like a recommendation for a good store bought compost that I can add to my existing Mel's Mix. What type should I look for and what brand?

I have used Black Kow and worm castings in the past.  Can get expensive!

I like Harvest Supreme, as well as Whole Paycheck's organic compost.  It's sold in the spring.  You should also be able to find mushroom compost, but try to find one that doesn't contain peat moss.  A good chicken compost is usually easy to find, but again, try to find one without added peat.  Worm castings and bat guano are useful additions.  Steer compost is another possibility, although Mel did not recommend it.

Also, take a look at local nurseries, not just the big-box stores, and read all labels carefully.  You might be able to find composted, or at least partially-composted, manure on Craig's list.  Rabbit and llama are great, and can be used without having been composted.

@Scorpio Rising wrote:I have used Black Kow and worm castings in the past.  Can get expensive!

also black hen (labeled as a fertilizer, but is composted chicken manure and smells to high heaven)  and start your own worm composting bin.

If you have the time and inclination to drive to No. VA.  Veteran's Compost www.veterancompost.com/ out of MD has a VA facility for quality compost.  They actually makes the Mel's Mix in collaboration with Kim at www.sfg4u.com and also a member of this forum sfg4uKim,

I just got thru mixing up my spring batch of compost.  I purchase some bagged compost and then mix in my own compost. 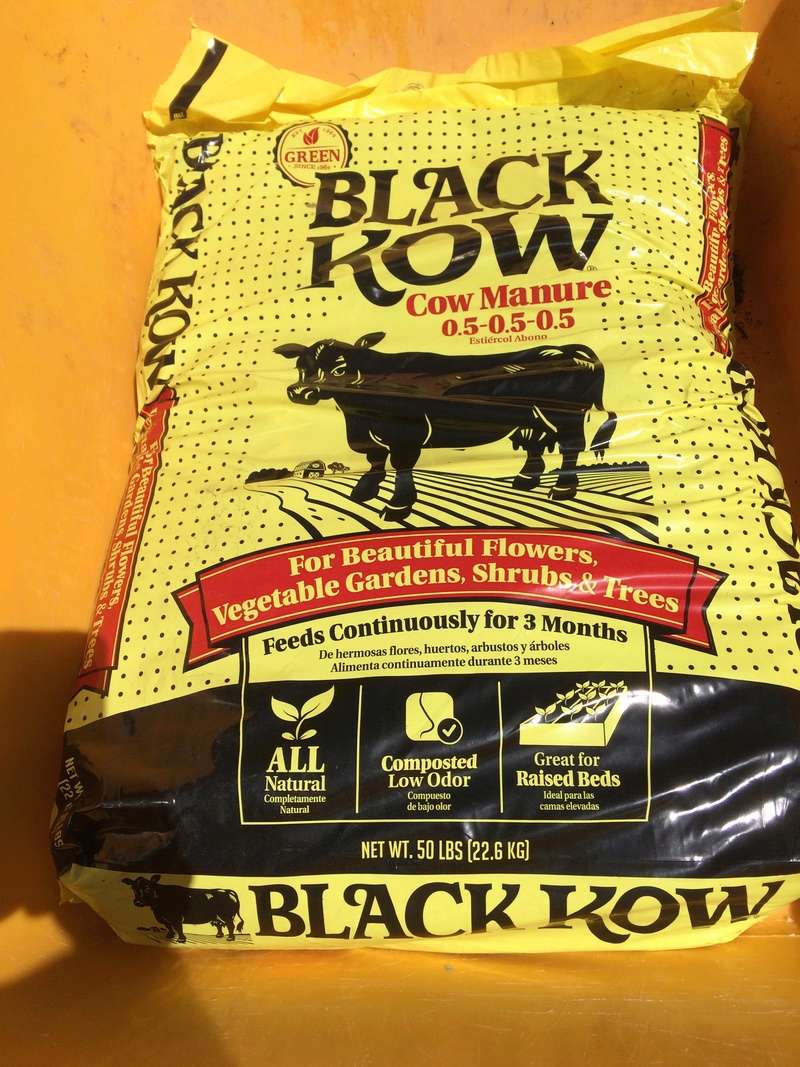 Evergreen Compost and Manure - This is my favorite because of the very small pine bark fines mixed in with the manure. It has a very nice consistency but am not sure about the nutrition.  Lowes is the only place I have seen this brand for sale. 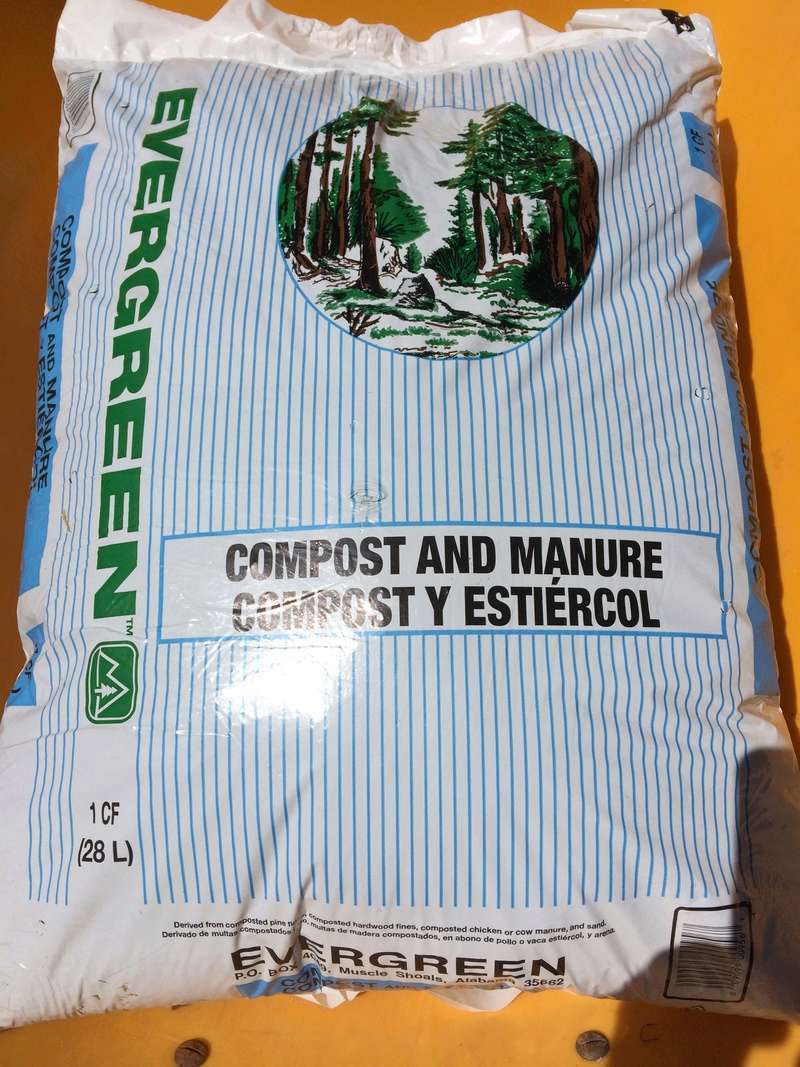 Cotton Compost - local Feed and Seed store.  Manufactured in Georgia so I doubt this particular brand is available anywhere else. 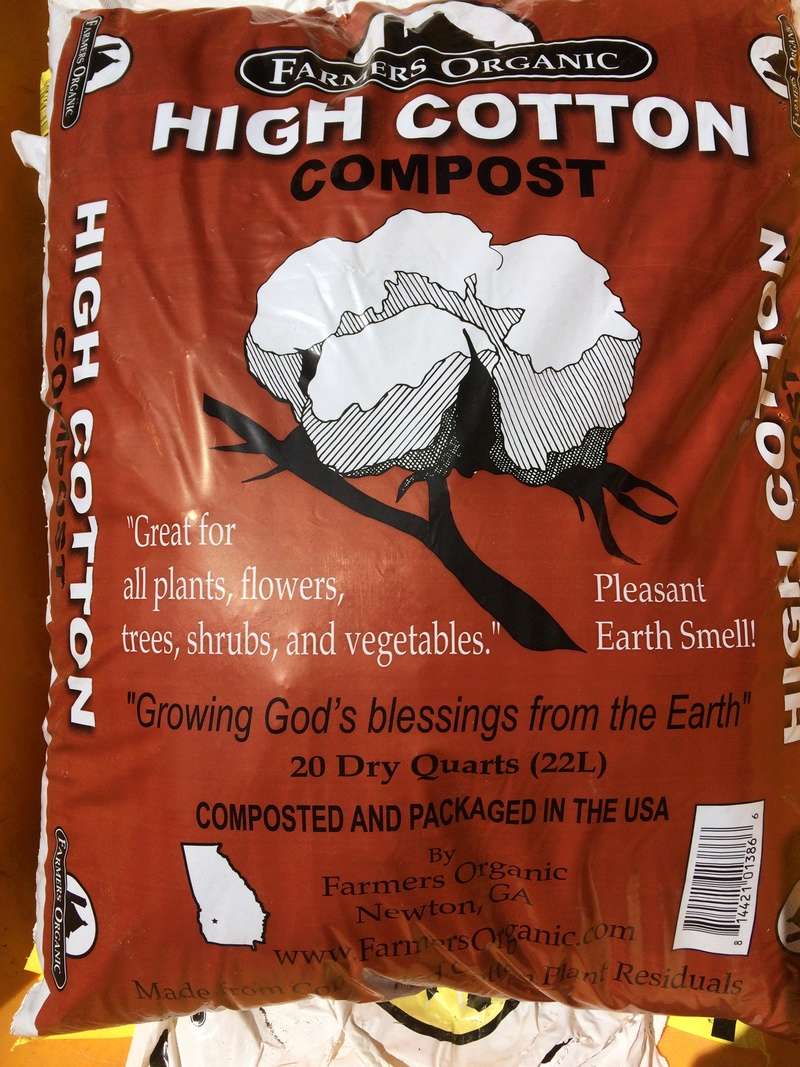 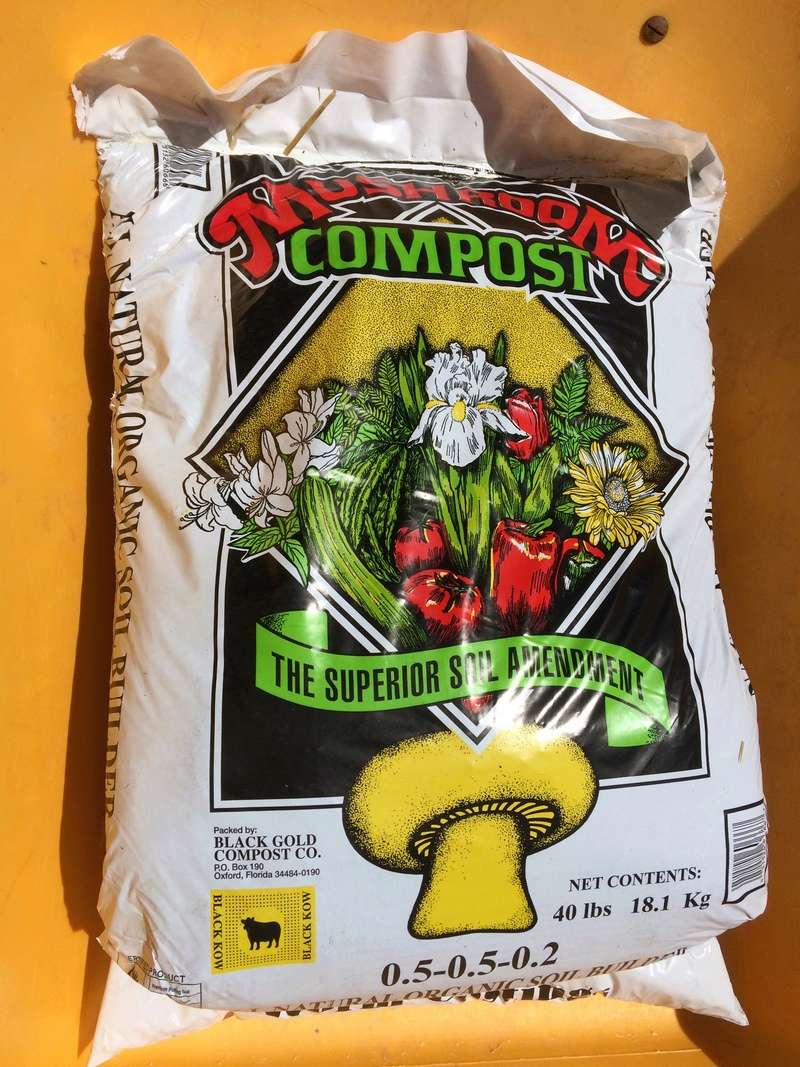 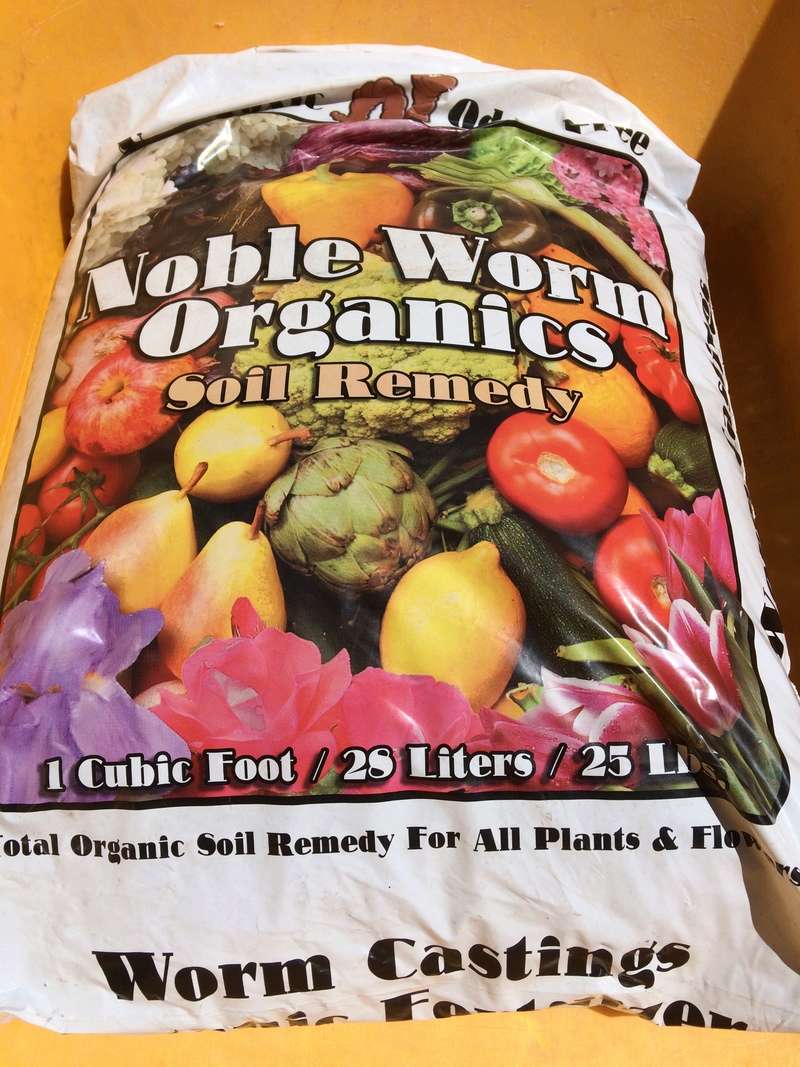 Chicken Compost - Feed and Seed store.  Manufactured in Georgia so is probably not available anywhere else. 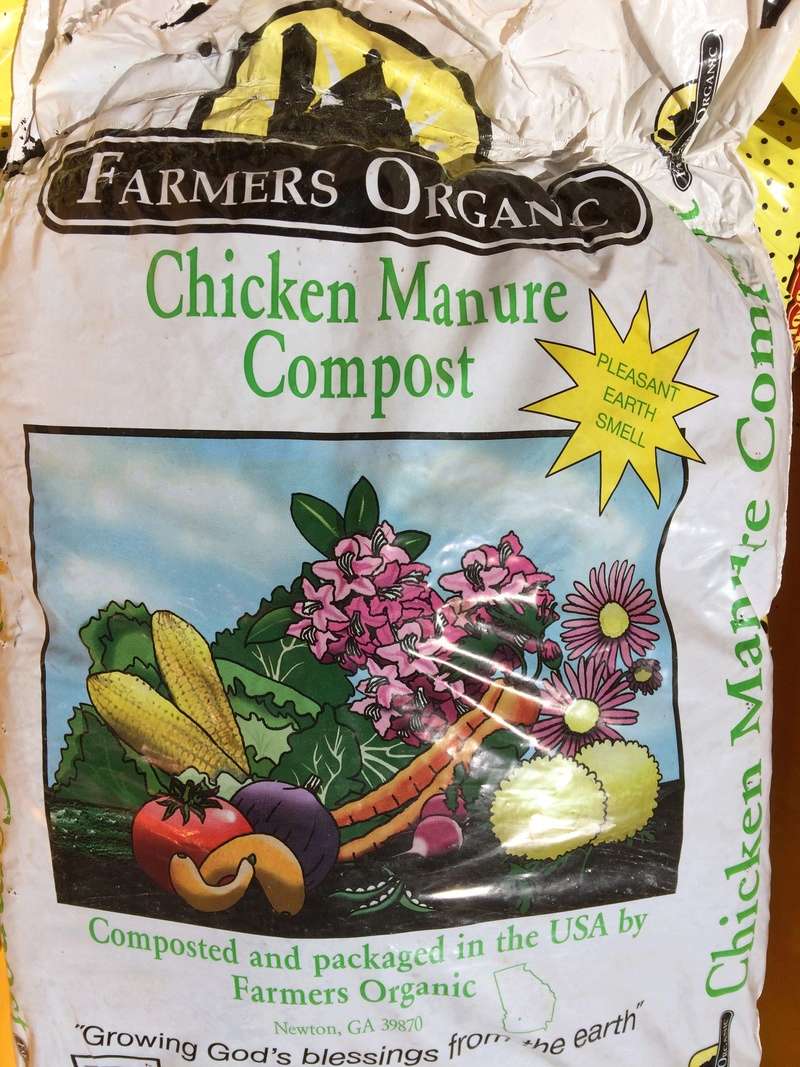 The most economical way to get compost is to make it yourself, using the quick/hot method.

You can purchase cheap compost components at Walmart and Lowe's, but you probably get what you pay for.  The really good worm castings are going to run you a pretty penny.

If you have a lawn, and it has not been sprayed with chemicals, you have an excellent source for compost.

Cut your grass and either rake up the clippings or cut with a bag to trap the clippings.  You can make decent compost with just grass, some kitchen waste, and if you want to get fancy, add a little alfalfa meal that you can buy in bulk cheaply.

There are many different ways that you can make finished compost in 3 weeks or less.

With Blood Meal and Bone Meal 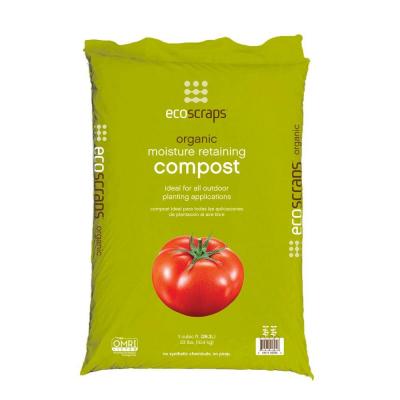 TNGeezer wrote:The most economical way to get compost is to make it yourself, using the quick/hot method.

I'd love to be able to make my own compost. Unfortunately, my yard consists mainly of weeds and pine needles. Going all kitchen scraps bring Solder Fly larva. I try adding cardboard, but it doesn't help.

My pile is going to need adjusting as well.  I was rushing to beat Ol Man Winter and just threw leaves, old hay and grass clippings layered in dirt in a pile and capped it with dirt.  I threw in some worms I found digging the soil layers and caps.  Couple of days ago I stuck a fork in the pile and the leaves didn't get broken down very well. Next chore is to turn the pile and introduce some O2.

The feed lot across and down the road a bit from my house moved the herd out and a front end loader pushed all this wonderful hay and manure into three big piles.  Been lusting over them for weeks, but I'm not sure where the lot owner lives and no ones been back to the lot in weeks.

On the Coast of Maine website, they have a "find a local garden Center" page.
They list Snow’s Garden Center in Charlottesville, VA as carrying some of their products. It did not list the lobster compost, but perhaps they can order it.

Thanks for the tip.

I don't know if this will help anybody outside our area, but....

The Mrs. and I just returned from a short sojourn to a nearby bedroom community outside of Nashville.  We went there because they have a great Farmer's Co-op in this county plus a couple of discount stores that we do not have in Nashville (and 3 antique stores that Mrs. Geezer usually finds vintage jewelry parts).

This co-op is definitely pro SFG.  They actually carry their own "Raised Bed Growing Mix."

I looked at the ingredients.  This is close enough to be Mel's Mix with the only differences being that they added a few extras.

It had Peat Moss, Vermiculite and Perlite, a blend of compost including worm castings, two types of limestone, and micorrhizae.

The only drawback is that it is in bulk, so you either have to bring your own bags or you need a pickup truck or something similar.

If this co-op has this stuff, then maybe others throughout the nation might have something similar?

They also carried Pro-Mix in 2 CF bags, but this was $17 and change per bag.

The assistant manager said that he uses Mel's Mix in his raised bed, but he adjusted the formula to 1 part Peat Moss, 1 part Vermiculite, and 2 parts compost.  He reminded me that after a couple years of adding compost every time you harvest, you are going to end up with 2 parts compost any way.

I'm supposed to be having the local nursery/garden store deliver five cubic yards of raised bed soil mix tomorrow to fill my beds. It's supposed to be very similar to the Mel's Mix. I plan to use a similar fertilizer outlined in the first edition SFG book for the heavy feeders.

However, and there's always a however in life, forecast is calling for 35-45 MPH gusts with scattered showers and a snow flurry or two.  Beautiful country up here but I still have 6 weeks to last (maybe) frost.  Last year I put plants in the ground over memorial day weekend and nearly lost them to a freak arctic blast wind, all the leaves looked freezer burned!  Most stuff bounced back. Sure hard to read posts about folks trellising up their zucchini already!

I too about lost all my spinach last year with the weird late arctic blasat, lasting for a week!

This year, I am having to replenish my boxes, settling, root bundle loss, whatever.  I agree; as years go on, you will lose some of the bulk agents.  Compost will be there...but you do lose the peat and vermiculite....volume loss.  I see it.

My compost for next year isn't going to work out. So I would like a recommendation for a good store bought compost that I can add to my existing Mel's Mix. What type should I look for and what brand?

100% hindsight. But last spring I wanted to do a potato tower.  Not having mix or compost to fill it, I picked up bags of the Kellogg's organic plus raised bed potting mix.

Never got past the first tier. It was as bad as the 1 star reviews now say.  Best described as just smelling raw and unfinished of waste.  Much like their bags of gromulch for the lawns.

I left two 3 cf bags sitting by my planting table, unopened.  Eventually used one to fill a giant pot for flowers.   I opened the other this spring.  Wow, what a difference. Rich , loamy, crawling full of earthworms.   No bugs, no stink.  The bag was sitting on concrete a good 5 feet from the nearest dirt.

Topped off the tower bed and spuds are doing great. Of course that has yukons in it.  Started a second tower.  Filled tier one and waiting.  Not sure what I'll do for filling upper tiers. This one is French fingerlings which should tower well.

I was in the store looking what I'll do for my potato tower, when did the stores get filled with $20/bag 1.5 cf bags of compost, potting store and soil amendments?

Even the anything saying organic starts at $9.99 for cruddy stuff. 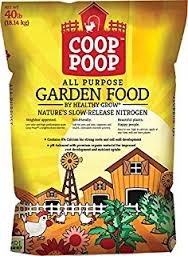 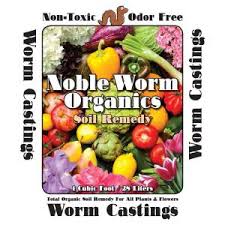 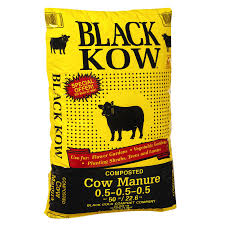 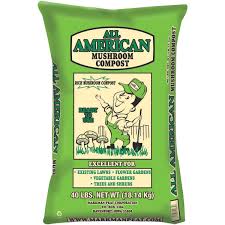 I was wondering how these will be for my 5 compost any suggestions. looking at doing my new boxes with theses and freshen up my boxes from last year. 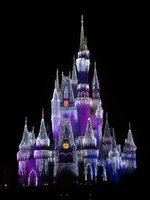 Sanderson or anyone else that can help I know what I need to fill my new boxes and old ones .WITH the old boxes I need to add about 3 inches in each I know I use the 5 compost but do I mix it into the whole bed or just leave on top