My first square foot garden is looking pretty good at this point. The bugs are no longer eating everything and thanks to some bird netting, I "might" get some corn and my sunflower is growing. I have read a lot of threads about mulch and am not sure what to do. So far the Mel's Mix has lived up to its promise and is AMAZING at keeping the soil moist. However, it has already gotten up to 90 degrees and we will reach temps over 100 many days. I am not concerned about weeds (I have a few but they are easy to pick with this new "clean" way of gardening!) but I do notice that the surface gets dry so more for moisture retention, I am wondering what to use. Sounds like compost is the best bet, but I just started my first batch ever, and it isn't even hot. So, can I use any bagged compost? Or is shredded bark better - but then I have to remove it? Also, I have some red material meant for mulching tomatoes..can I use that around them? I have spent a lot of money on this garden - I know it will pay off in the long run but was wondering if I can use what I already have. Also, I read that coconut coir was a good mulch - what about peat moss ?(I still have a lot left over from making my original Mel's Mix). Thanks - sorry so long

Today I finally finished mulching my potted plants (peppers, eggplants, tomatillos, herbs and flowers) with over-sized circles of tulle, hole in the middle and sliced on one side to fit around the single plants, then covered with plain wood chips. For the beds, I'm trying chopped bedding straw this year. The straw will be a lot easier to remove when it is time to replant. The straw stalks are chopped/cut into 4-6" pieces.

What ever mulch you use, it has to be removed when you rip out a plant, remove the roots, replenish with new compost and replant.

Yes, you can use compost as mulch on top of the irrigation lines, but I save compost for topdressing for nutrition and replenishing when replanting, not as a mulch. Peat moss, no. How will you remove it from the top to add new compost? Bark is fine, as are pine needles. No redwood bark or gorilla hair (shredded redwood bark). The Red Tomato Mulch sounds interesting for single plant/square. Perhaps multiple plants but then the oversized holes have to be located appropriately (2, 4, 9, 16). If you use it, keep us posted!
____________________________

I use wheat straw on my garden, then throw it in the compost at the end of the season.

For individual pots, like house plants, I use... sand.

My wife had a plant from her grandma's services several years ago, and had kept it in her office. She finally had to bring it home after some weird change in rules at her job. Well it had a problem with those little gnat things, and we hoped that as it spent the summer outside they would vanish. No such luck. That winter out house was almost overrun with those little buggers. We would sit out cup after cup of apple cider vinegar and collect hundreds of the things. It didn't even make a dent. We tried Bayer and other products. Nothing.

Finally, after a lot of digging around, I came across someone somewhere that explained the cycle of those little bugs. The lay lots of eggs in the nice potting soil, and spread like mice. Then they mentioned that they absolutely will not lay eggs in sand.

That was 3 years ago, and I haven't seen one of those things in the house since. The plants look great, and it seems they couldn't care less that there is a little sand on the dirt.

As an added benefit, I've also noticed that the moisture retention dramatically improved. This makes sense as it's tough for the water to evaporate through the sand.

That's a good question. I can't answer that one though.

Where the sand comes into play is they apparently hate the sharp edges of sand and will not lay their eggs in it. Guess it cuts them up or something of the sort.

Either way, however it does it, it works fantastic. My initial concern with it was whether it had the possibility to make the soil anaerobic, or create that condition between the top of the soil and the sand. It hasn't yet, and I water mostly from the bottom. I do on occasion use a few dippers of water on top, so maybe that's helping.

One less pesticide to use, at least. Me personally, I don't necessarily mind them if I have to, but I'd prefer not to use them. The two I tried would knock the gnats down, but wouldn't do anything for the eggs. So within a week or so, they would be back stronger than ever.

The sand stops the reproductive cycle by taking away their egg laying grounds, and poof they were gone in short order.


I've often thought of trying to work in some sand as a mulch in the garden, and wondering how/if it would have any effect on similar pests. Haven't really figured out a good way to do that one yet. Especially with MM and how it's so friable.

Sure would lock sun out from the weeds, and be a nice asset in controlling evaporation. I think I water my houseplants once every 3-4 weeks, where it was every 4-7 days depending on the heat.

Momvet, I've used grass, pineneedles, woodchips, seaweed and leaves.  I always come back to pine needles.  But you could use shredded paper if you don't have a wind.

Vortex, that is some fantastic news about the sand, especially since I live on a sandbar.  I hate those little gnats.  I wonder if it would work to keep aphids & fruit flies from breeding. I'm not sure where they come from but I'll try it this winter on my indoor veggie garden that always ends with aphids.

I believe Turan uses sand in her mix.

sanderson wrote:    Today I finally finished mulching my potted plants (peppers, eggplants, tomatillos, herbs and flowers) with over-sized circles of tulle, hole in the middle and sliced on one side to fit around the single plants, then covered with plain wood chips.  For the beds, I'm trying chopped bedding straw this year.  The straw will be a lot easier to remove when it is time to replant.  The straw stalks are chopped/cut into 4-6" pieces.

Thanks for all the info. I am still a little confused. Is the tulle to keep the wood chips from mixing with the Mel's Mix? Also, where do I purchase the chopped bedding straw? I looked on the Home Depot site and Amazon and am not finding it. I think I will try the red fabric on my tomatoes. All my tomatoes are doing well, but the ones in my raised beds aren't even close to the ones I planted in bags from the 99 cent store!

I mostly use mowed grass for mulching.  Sand helps make something inhospitable for slugs.  I use it over carrots because it is so easy for them to push through.  Vermiculite would not work, does not have the sharp edges.  Diaometious earth has similar properties but more so and can help against aphids and other soft bodied things.  Grass is nice because it will slowly sheet compost as well.  You just keep replacing it as the summer goes on.  I do not recommend straw, slugs love it here.  Pine needles are really nice when you can get them. Bagged compost would work well, it would slowly become part of your mix.  Do not use peat or coir, they add no nutrients and will mix with hte MM.  You get straw at the feed store or pet store.
____________________________

momvet wrote: Thanks for all the info. I am still a little confused. Is the tulle to keep the wood chips from mixing with the Mel's Mix?

Also, where do I purchase the chopped bedding straw?

I am posting this just in case other newbies read this thread. Not happy with the straw mulch at all! I was out of town for 10 days (DH taking care of garden, but it was cool and rainy so he really didn't have to do much). Came back today and there are weeds all over my previously weed-less boxes and containers. Apparently the straw has quite a bit of seed in it. I spent 2 hours pulling most of it out but probably won't use straw in the future!

Momvet....That's strange.  The year I used hay for mulch I got tons of weed seeds and their next generation of weeds.
The year I used straw for mulch, no problems.  I get my straw at Blue Seal Feed and Grain.

I have used straw for three years.  The first year I had a few wheat plants germinating in the isles but they were growing on top of the newspaper so they came right up.  The next year I got the prettiest stand of wheat straw growing in all my compost piles.  This year so far I have not had any wheat straw germinating.  And have never gotten any other kind of weeds from the wheat. 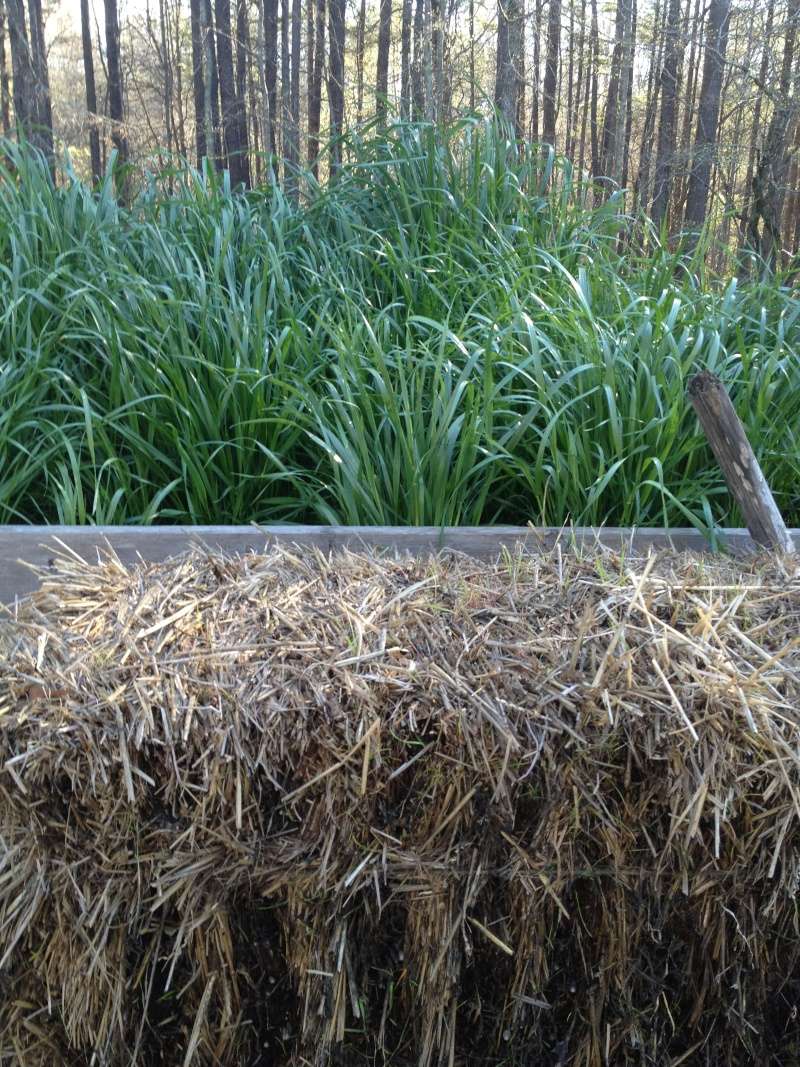 MomVet, I'm so sorry you are having a bad experience with the Bedding straw. I noticed that there were wheat heads (grains) in the straw I used. I thought I picked them all out as I cut up the stalks. A few grains germinated but they were easy to pluck. Next time I will only cut up the larger stalks and leave the finer stuff for composting.
____________________________

Thanks everyone, after a heavy de-weeding, there are some new stalks but not as many as before. I got my straw off of Amazon because I didn't need a large bale.