May Avatar: Not Just Veggies! (click this)
Welcome to the Official SFG Forum
!!! Happy Gardening in 2020 !!!
Search
Latest topics
» What new seeds are you saving this year?
by plantoid Yesterday at 4:59 pm

Hi there! I'm new to gardening and have already built our boxes and am putting together our plan now. Could you please take a look and give me any critique, advice or help

Oh and we're a family of five (if that helps).

First I was going to suggest that you switch the tomatoes with the peppers and garlic, because (indeterminate) tomatoes will grow tall, and need trellising. Then I realized you also have cucumbers shown, on your south side. They, too, will likely overshadow other veggies, as the tomatoes do.
Is it possible to turn your vegetable box sideways, so all of the above can form the tall, overshadowing, trellis-needing "wall" that they need? (Of course, I see 10 squares of that type, and only 8 actual squares available--maybe some of your tomatoes are the non-jungle-ish, determinate kinds?). But then there's the corn to wonder about. I hope to see others' ideas and suggestions later.
I only have 2, 4x4 boxes next to each other, so maybe I'm just overwhelmed with your plans. I've never even thought about raspberries and the like in a SFG, either. My strawberries are in a "strawberry planter" in the front yard--at least for now. Maybe a pyramid box in the future

Welcome to the forum.

Tall vining plants, like tomatoes, cucumbers and sugar peas and pole beans should be in the north rows, whether they are trellised or staked, so they don't shade out the other plants. In Zone 4 you are going to need all the sunshine you can get. Unless you are going to allow your cucumbers to lay on the ground and trail off the bed, they need to be moved.

That goes for your sunflowers as well. Don't place them where they will shade other plants.

It depends on where you are if it matters because the summer sun is so high in the sky all growing season. I do this with no problems, the only shade in my garden is on the west in the morning and the east on the afternoon.
I would suggest grouping the pole beans together. Maybe use a tipi to trellis them in a 4 square block? You need to be able to reach into the center of the bed to harvest bush beans and greens. The cherry tomato plants might get in the way of that, especially if there are bean trellis on the other side. Garlic can be put in the center because it does not need much fussing with. So maybe switch it to where the spinach is, put the spinach where the cherry tomatoes are and the tomatoes together on the end.

My only other consideration would be that it is nice to put cherry tomatoes and peas near major pathways so the family snacks on them as they go by. I figure any vegtable that gets in a kid is good and if I do not have to prep/cook that much better

Thank you for the feedback. Made a couple changes to the plan, but have a few questions:

Can the carrots stay with the corn and potatoes or should I move it to the other veggie box?

I wasn't sure how many tomato plants to plant for our family. I'd like to make salsa and possibly pasta sauce. Also our three kids all love tomatoes. How do I know how many each plant will yield? (in terms of quantity, not weight) Do you think I have the right amount or too many?

Are the cucs and peppers okay next to each other? Would appreciate any input on how the plan looks now or suggestions. 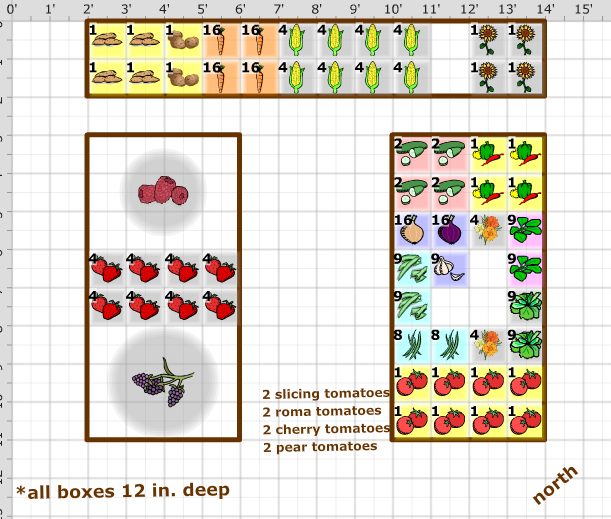 I have a thought about the fruit SFG. The raspberries and blackberries will usually become a big bush overtime which might make it difficult to get into the middle strawberry plants to pick the fruits eventually. I don't have any real experience with these in a SFG, just past experience with berry bushes.

My thoughts: skip the perennials in the bed and put them in the ground. Yes, they will grow(and they may even grow better), but they do just fine in a regular bed. If you're heart is set on growing the canes and strawberries in an SFG environment, then I'd probably space the strawberries out a little further to allow them to send out runners for new plants. This is assuming that strawberries are perennials in your area. I'd check the amount per square also, 4 seems a lot.

The cucumbers will vine out a lot. I personally prefer them on a trellis. You probably won't have a good harvest with 8 tomato plants so close together either. I like to give mine space, and that usually means leaving the squares surrounding it empty.

Save yourself some money and go 6" deep only. I grow my potatoes in 6" of MM and they just mound up naturally(it's quite fun to watch actually, and at least I know that the tubers are forming).

If that were my garden, that slim bed would be on the opposite side(the north side) of the 2 regular beds and would hold my tomatoes and cucumbers.

I would move the carrots to your empty spots in the main bed. Then maybe fill in with more corn or a summer squash. Yes the tomatoes are a lot for the space, they will need pruning to stay in that space but it is well doable, which is why it is what Mel recommends.