October Avatar: Fall Gardening!! (click this)
Welcome to the Official SFG Forum
!!! Happy Gardening in 2021 !!!
Search
Latest topics
» Hello from Howe, TX Zone 8a
by wpsnts Today at 10:33 am

» The SFG Journey-Johnson Su Bioreactor for composting, No turning
by has55 Today at 8:16 am

» My SFG journey- using hanging clips on cucumber and tomatoes
by has55 Today at 8:06 am

My first 2 SFG boxes with vertical supports were installed spring 2009. I had a pile of fun reading about SFGing on this site and in the book last winter. Buying seeds and planning the crops for the season was also enjoyable as I has something to do while I was waiting for spring to come.

We have a yard surrounded by trees so I watched the sun / shade tracking throughout April and May so I could choose the sunniest location with a south-east exposure. Late April and early May had been fabulous and warm but turned cool again after May 24 planting weekend. These photos were taken June 11, 2009 after having to cover the plants after a series of late frosts -- I had to use a variety of pots, buckets, and plastic containers to cover the transplanted plants and seeds that had sprouted. 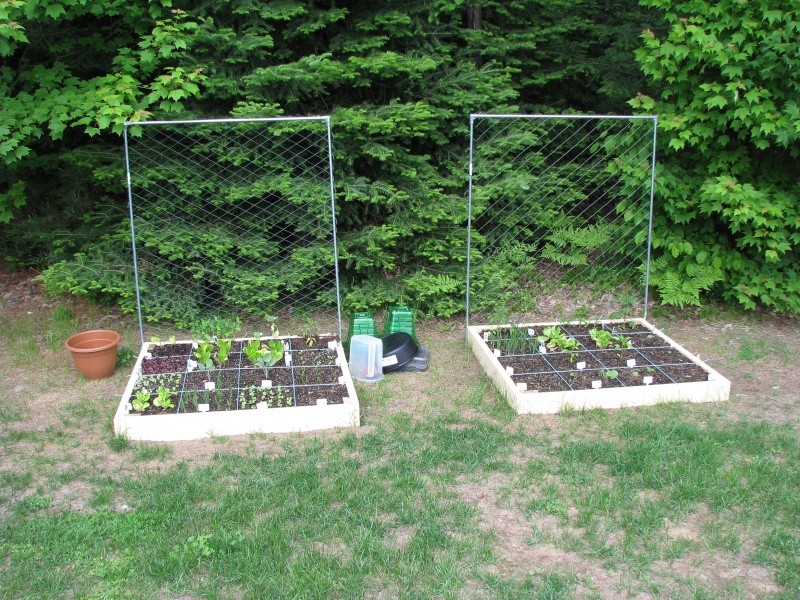 By the time I built and installed my boxes it was almost time for frost-free planting so I bought pre-started romaine lettuce, broccoli, snap peas, cucumbers, 2 cherry tomatoes (1 sweet millions and 1 juliet), butternut squash, peppers, great lakes head lettuce, onion sets, and strawberry runners. I also planted seeds for carrots, radish, beets, snap peas, cantalope, spinach, and white turnips. I had some garlic in the fridge so also planted a plot of garlic too. 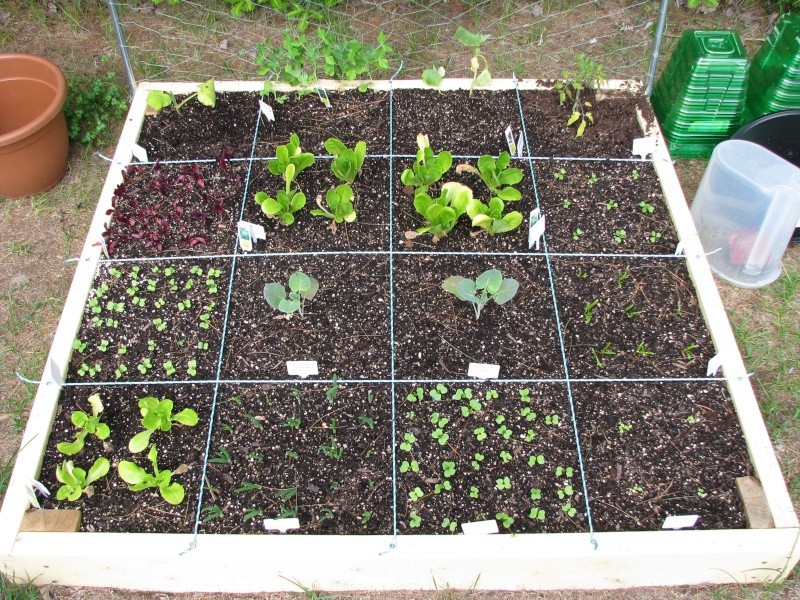 Once the garden made it past the late frosts in late May / early June things were looking pretty promising as seen here on June 11, 2009. I had my husband water while I was away for a week mid-June. I picked my first plot of radishes late June and planted another. The lettuce was starting to get quite big and almost ready to start harvesting. I had fun replanting the onion sets and garlic cloves back in the ground every time a silly chipmunk dug them up and left them on top every other day. He never ate them so I just replanted them until it eventually started to grow and the chipmunk started remembering he didn't like them. The garlic never amounted to much so I left it planted so it can grow next year.

The weather in June was nice and warm, everything was growing well. Unfortunately I didn't get any pictures before the deer found my gardens early July. The deer grazed the tops off the peppers that had just begun to flower, ate all the lettuce before we harvested any, snipped the snap peas back to the ground, ate the beet tops off, and ate the leaders off the tomatoes. The deer pretty much cleaned out the garden over 2 nights. I seeded everything that was eaten again and added deer mesh enclosures but the weather was overcast and cool the rest of the summer -- most of the long season plants never amounted to anything. 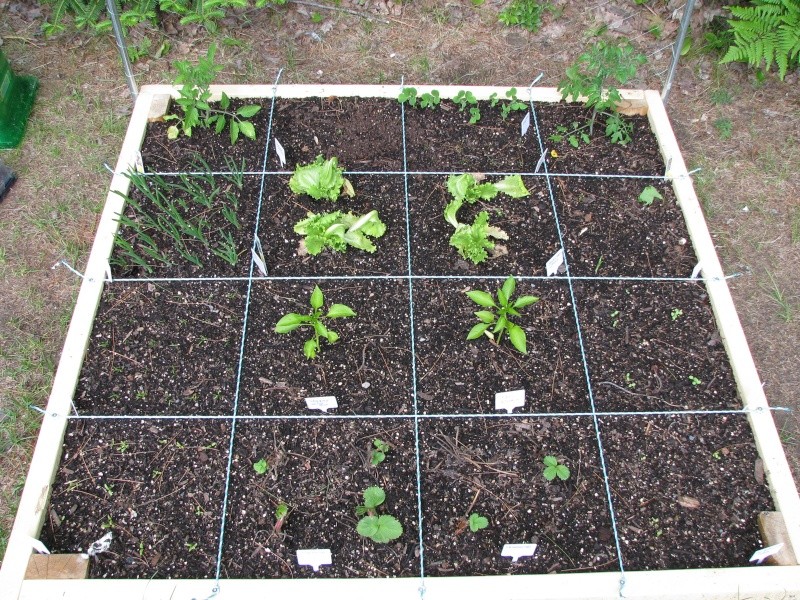 The broccoli was the only transplanted veggie that the deer didn't eat but they didn't thicken up, only growing heads that were smaller than loonies (I won't waste space on broccoli again). I did get some white turnips, something I had never tried before, they are eaten uncooked and were a bit like eating sweat radishes. Spinach didn't do well and some of the radishes only produced leaves. The snap peas were really crunchy and sweet but I should have planted more of them.

I did finally get a crop of various lettuces: buttercrunch, grandrapids head, leaf, red butterworth, and romaine. We enjoyed fresh salads late August. All the beets grew tops and no bottoms so we added them to our salads. Nice green onions that were quite sweet. A total of 3 small crops of snap peas. The cucumbers, butternut squash and cantalope really didn't grow well -- the weather wasn't sunny and warm enough for them, they only grew about 6", flowering just before the frosts came near the end of September (earlier than usual). The tomatoes, both small varieties only started ripening late August -- definately delayed too by cool weather and the pruning job the deer gave them. The Juliet tomatoes were really tastey so I saved seeds to use this year. The carrots that I planted from seed back in May were really delicious but they took all season and weren't big enough to pull until after heavy frosts in Oct. The batch I planted in July didn't amount to much.

I found the SFGs were very easy to care for and I never had to pull any weeds. I see that this technique has a lot of potential but this was just a cool season and the deer enjoyed the main crop before we did. My friends that have gardens had similar challenges so I am certain it was mainly the cool weather that caused the growing problems. The growing season was barely 4 months this year between frosts, overcast most of the summer, and cooler than usual. I am an avid perennial flower gardener and my monkhoods didn't bud until October so I had to cut them and let them open in a vase in the house or the frost would have killed them before they flowered (very unusually late).

I am already planning to add a couple more SFG boxes with vertical supports to increase our chances of getting produce this year. The deer won't get any nibletts this year and I found the chipmunk was too lazy to crawl under the deer mesh. I will be starting a bunch of seeds shortly to give them a really good head start before they go into the garden. I can hardly wait for the snow to melt so I can start playing in my gardens again!

Hi Bullfrogbabe,
Great story and pictures. It is really nice that you shared that information because we all can learn things from each other even over here in Australia in a different climate.
We don't have chipmunks but do have fun with the blackbirds digging the seeds and plants up before they get going. They like the fresh dirt to scratch in.
You certainly tried lots of things.
We are really fortunate that we can grow veg's all year round without much trouble so just planting all my winter things now as the summer ones finish.
Broccoli, cabbage, lettuce, broad beans, leeks, onions, silver beet, spinach etc.
Cheers Ray

ray, you're making me more and more envious!!! and reinforces that i need to seriously pursue 4 season gardening - i found a neat book by eliot coleman that i read in the last month that makes it seem possible to do - even in zone 5 - where the author also lives. . .

someday i want to visit australia - and live there for about 3 months to get a small feel for the area. it's on our list of long term goals.

All that and you are still itchen to give it a go this year! You have got it bad.....just like most of us.

You seem to have the heart of a teacher. I will probably read this post again and follow your garden hi's and lows.

Well your garden looks great, it's a shame the deer got to it. They do sell a critter cage here for your sfg, you might want to check it out. Here is the link.
critter cage

@happyfrog wrote:ray, you're making me more and more envious!!! and reinforces that i need to seriously pursue 4 season gardening - i found a neat book by eliot coleman that i read in the last month that makes it seem possible to do - even in zone 5 - where the author also lives. . .

someday i want to visit australia - and live there for about 3 months to get a small feel for the area. it's on our list of long term goals.

Hi Happyfrog,
Australia is a great place to live just a long way to anywhere. We come to US every year to visit my wife's family in Pittsburgh and I love visiting the East Coast as it is beautiful. We are coming over in September and intend to tour up to Canada to look at the trees in the fall which I havn't seen.
We are having huge rain storms at present with a lot of flooding but normally a dry climate. It is great for growing vegetables. Planted lots of winter veg today.
Cheers Ray

Great post & description, thanks for sharing! Too bad about the evil deer.

thanks so much for your post. I really enjoyed reading it and seeing your pics. Sorry the deer enjoyed the garden more than you had a chance to.

I have some deer fencing now and this growing season will hopefully be sunnier! Well it can't be any colder, rainier or darker than last year!

I am planning my gardens and will be starting seed indoors to get a head start this year. Once I get my SFGs planted I'll post a picture of my deer fencing set up.

It has been pretty mild that last couple weeks and the snow is melting fairly quickly -- lets hope winter goes out like a lamb! I can see some of my perennial gardens showing through out front now and may be able to cut them back in a couple weeks when they dry up a bit.

My husband is itching to get our motorcycles out, while I can't wait to get into the gardens!