I'm a little different. I start thinking about Christmas gifts in the middle of summer, and start either making them or collecting them.

Well, I was thinking recently about how cool it would be to give my mom and mom-in-law some dwarf tomato plants just on the verge of ripening for Christmas. How fun would that be?! But I have no experience with dwarf tomatoes and was wondering what everyone thought. I know I'll need to start them relatively soon if I want them to be ready by Christmas!

I'm thinking something exceptionally small and compact. I've heard about Red Robin and Florida Petite tomatoes, but I'm having a really hard time finding seeds. Any other thoughts?

Tomatoes really like lots of light and heat. I really don't have experience with dwarf varieties, but wanted to sound off on another idea I saw for christmas... it was a rosemary tree. Someone took rosemary bushes and pruned them in the triangle christmas tree shape. Very cute, and my rosemary has lived through the winter before (cold tolerant).

Hey SJ, thanks for the tip. I've actually seen those rosemary Christmas trees being sold at local shops in winter. They're very cute! I'm not a big fan of rosemary, however.

I've read up a little bit on red robin tomatoes (as much as I could, anyway; there's not much info on them out there), and a lot of people have had success growing them on a window sill through the winter. They're apparently tolerant of cold temperatures. I figure it's worth a shot to try, and if they're a total flop, well, I can try again in spring and give out seedlings as mother's day gifts.

I've never seen a dwarf tomato, but I've got some very small determinate ones, Sophie's Choice and they only grow 18-24" tall and only need a short stake. The tomatoes themselves, tho, are large. 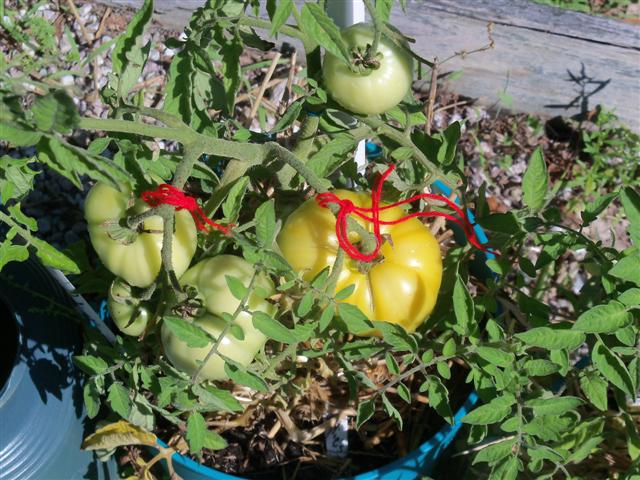 Here's one of my three Sophie's plants.

I transplanted this to its pot 6/8 and on 8/2 I harvested my first one. 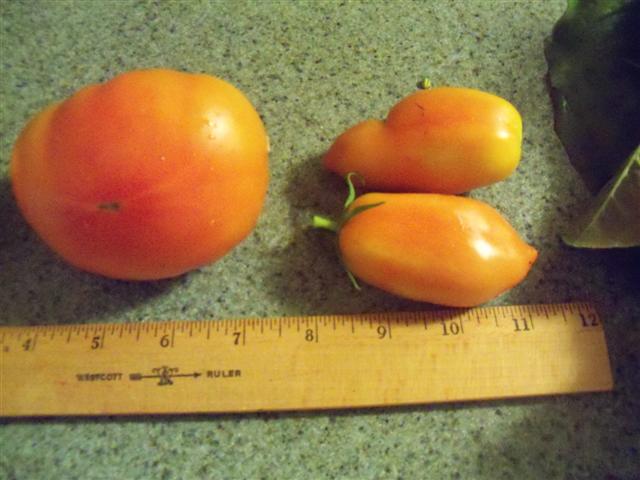 On the left is my first Sophie's Choice with some San Marzano Nano toms picked 8/2.
Mine have only produced 4-6 toms per plant, but they are good-sized toms.

I have never seen a dwarf tomato before, nice looking fruit. Very interesting, thank you for the pictures!

Littlesapphire, I have a tiny Red Robin dwarf tomato plant. I bought mine at a nursery in May. At that time, it had about six cherry tomatoes at various stages of ripening. I planted it in MM. After those tomatoes ripened, it did nothing until August. It is now giving me fruit again. The tomato taste is not as desirable -- to me -- as my Sweet 100, but I am fond of this little guy and will plant it next year if I have luck starting it from seed. I found a source: http://www.reimerseeds.com/red-robin-tomato.aspx

It is very tiny and compact, which is perfect to give as a container plant. I have mine in one square of my SFG, but I could easily plant 4 per square. It is a determinate and does not require pruning. However, I do trim the dead leaves and stems closest to the ground.

Thank you, Mijejo! I'll check into that website for sure! I figured they wouldn't be as sweet tasting as some of the larger plants, but if I can get them to produce toms in the winter, they'll sure taste better than what you can buy in the store