Well I was out taking pics of my garden progress a while ago, and I came across a plant in the back of my yard that, with the blooms it was putting out, I could swear was identical to the raspberries I bought and potted. Could it be that I have wild raspberries growing in my backyard? I can't imagine how I wouldn't have noticed them last year, but on the other hand I can't imagine that it could be anything else. Check out the pic: 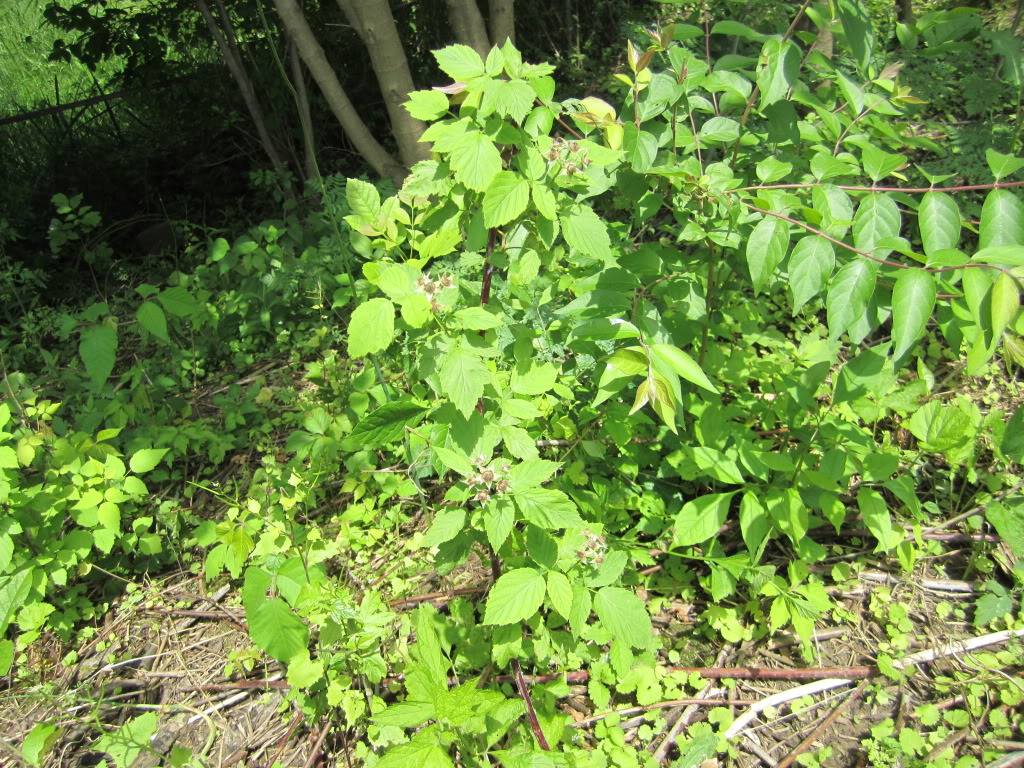 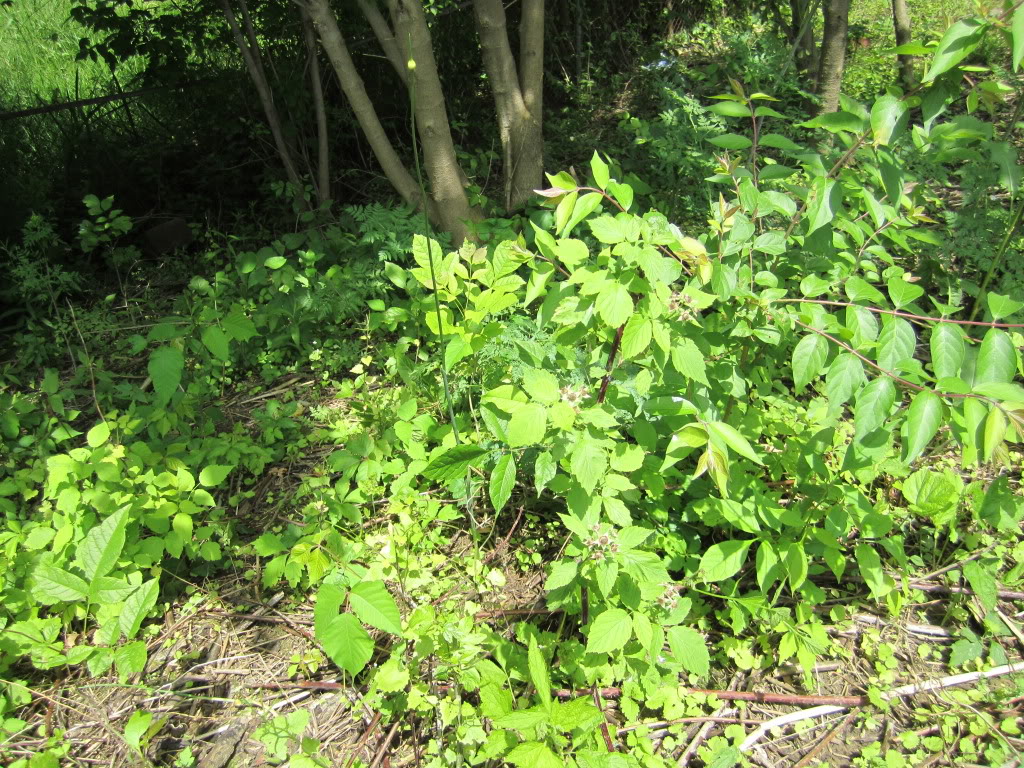 What's more, if you look a little behind and to the left of the plant, there is what I could swear is an onion growing!

Anyway, if anyone could chime in on this I would really appreciate it. It would be a really cool experiment to try to cultivate these wild varieties if that is what they are!

Mike, it looks like it could be a wild raspberry. Do you also have wild blackberries in your area.
The only way I know to tell them apart before the fruit is ripe is
Raspberries - round canes
Blackberries - block (squared) canes.
At least that is what they taught in Girl Scouts, way, way back in the middle of the last century.

OMG is that really when I was in the Girl Scouts?

Yah they are round canes so I guess if anything they're raspberries. Hmm I guess I'll just have to wait and see. I'll shoot myself in the foot if they grow raspberries, because I pulled out and burned probably dozens of those plants when I was clearing out that part of the yard for future garden space...

Anyway I'll keep an eye on them and let you guys know if anything edible grows off it!

It looks very much like my purposefully-planted raspberries....you may not have noticed them last year because they fruit on last year's canes....so you want to be sure not to pull up the new canes because those are what will bring next year's fruit. I wouldn't stress too badly about pulling the plants up. I've all but forgotten about my raspberries in the past - they've been mowed over, had a tree limb fall on them, etc. They are pretty good at coming back! You should start to see new canes coming up all around fairly soon!

Ah that's good to know! I did see plants that had the same leaves but a nice green stalk instead of the woody one nearby so those must be new canes.

So when you say last year's canes, do you mean they fruit from the 2nd year on, or that they only fruit the second year and then die, or what? I ask because I had been planning to ask in a new thread if I should cut the new canes coming up in my potted raspberries to avoid overcrowding. If the canes that are producing this year are going to die afterward, obviously I don't want cut the new ones, lol.

You are right. Those green canes are new ones and will not fruit this year. The ones from last year will get fruit on them this year and then die so you will want to cut them out in the fall or perhaps next spring. I do mine in the spring. Raspberries are kinda like rhubarb.......almost impossible to kill.

Ah ok. Thanks a lot for telling me, I would have been pretty ticked at myself if I'd taken the initiative and cut them out!

Now I just hope they both put up new canes...the smaller of the two I bought has two or three coming up already but the bigger one hasn't put up any! I guess I can always transplant if need be.

Some of the plants in the front left of your photo, low to the ground look like poison ivy too me? Three leaves, green and shiny.....be careful! The taller one in the middle does look a bit like raspberry, does it have prickles on stem?

Ha yah you're right there's poison ivy (or maybe it's poison Oak? I can't remember anymore) all over the far end of my back yard...fortunately, I'm not allergic and I seem to have passed that immunity onto my kids. xD

What I thought were onions turned out to be wild garlic! I harvested a nice handful of seeds and intend to cultivate it in my garden next year to see if they grow a little bigger and are worth using.

I still think the other plants are some kind of raspberry, but they never fruited...the flowers just died and nothing more ever happened. Idk if the soil isn't fertile enough or if it's just a raspberry-cousin that doesn't fruit.

Incidentally, I also found a vine on one of my trees back there that grew clusters of what looked exactly like young grapes (the leaves looked dead-on too) but the berries never grew bigger than maybe half-marble size and remained very sour...they finally turned purplish but by then they had become hard and gross. Oh well it was fun to hope!