Growing up we had a huge patch of rhubarb. As we picked it out in the garden we would cut off the leaves and put them around the base of the rhubarb plants like a mulch. Not sure why we did it,

but we always had bumper rhubarb plants. This year is the first year I am able to harvest from two of my plants, and was actually able to plant two more after dividing off some side shoots. I was debating doing the same thing with the leaves this year as a natural weed barrier around the rhubarb plants. There are no other seedlings around to be bothered. Any thoughts? I know it can go directly into compost, but do you think there is any harm in putting the leaves around the plants?

Are rhubarb leaves poisonous, or can they be useful in any way?

And this link also http://www.doityourself.com/stry/make-natural-pesticide-from-rhubarb-leaf

I have a huge rhubarb patch. Each time we pick we shuck the leaves right there and put over any bare spots. Yup, great weed barrier and composts itself! I have never used them around tomatoes. humm..will have to research more..would be great if I can use them for mulch everywhere.

I learned to do this from my parents and grandparents. Sure cuts down on the weeds. This patch has been here since I bought the house 15 yrs ago. Next spring I am going to practice dividing. I took up a couple of small areas that had always been in the yard. The roots are huge! I bet these plants have to be 20 yrs old or more! There are still starts coming up lol...

I gave the divisions to several people and they started growing right away! My neighbor planted his right across the street from me. His have already started seed heads. I would have cut them off this year to give roots more growing time. But his wife KNOWS EVERYTHING. She is always trying to tell my to cut and mulch and compost. He just tells her I do just fine rofl..wouldn't want to say different!

Cindilu, glad to hear someone else learned to use the huge rhubarb leaves as "mulch." Your neighbor may not know there are several varieties of rhubarb, some that are wont to bolt earlier than others. We have two varieties, one that bolts like a quarterhorse, the other (with brilliant red, sweet stems) is more sedate, on for the long hall, and delicious! A couple of years ago, I divided the big red plant (later named "Big Mama") into three pieces. All divisions grew well. This spring my sister wanted a start of "that good rhubarb you have." So I dug up one whole--I thought--offspring from Big Mama and it went to live it northern Washington State. Got a call from sister saying, "You gave me twins! The plant we got has two heads forming great stalks." In the place the former Big Mama offspring came from, I cultivated and placed a 4x4 raised bed, filled it with Mel's mix, then planted strawberries. Last week I noticed a strange, bright yellow wrinkled leaf poking its head above the MM, right next to a lovely strawberry plant. Examination showed the twins I'd sent my sister were actually triplets, and the leftover root was erupting amongst the strawberries. Now my husband calls that raised bed the "Pie bed"--he loves strawberry rhubarb pie. Next fall when the rhubarb goes dormant, we'll see about redoing the Pie Bed to move it south so the insistent rhubarb plant will be the focul point between the two strawberry beds. Or, I'll dig it up and send it north to live with its twin siblings. We'll see.

Nonna, my rhubarb has huge leaves and the tartest sweet stalks! I make a
lot of rhubarb crisp in the microwave and strawberry/rhubarb pies. I am
going to try to can some this year. I don't like the way it is when I
freeze it. It gets to watery. I found out I can water bath can it with
or without sugar. My grandma's notes say sugar makes it more watery but
you can use as is later. 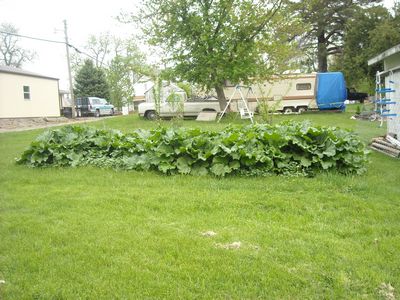 Thanks, CindiLou, for info I didn't know. Ain't this forum great? Your rhubarb patch is beautiful! Big Mama is envious, though this past weekend I harvested two stalks as big around as my wrist and made a rhubarb strawberry compote to serve over the shortcake featured in the current Fine Cooking magazine. Oh, mmm-mmm-mmm.

What I love about my patch is that after I am tired of rhubarb (you can pick it all summer, it is the bugs that make you want to stop lol) I let the seed heads bloom. They are so pretty. I will try to remember to take a picture of that later this summer. Otherwise I cut off the seed heads so the rhubarb puts all its energy into growing.

I just made hubby dig out a huge rhubarb like that and toss it in the compost pile to make room for my SFG expansion.

I hate rhubarb, never developed the taste for it. Maybe I should have sent mine to Washington! LOL

Now here's something to do with the largest leaf your rhubarb produces, make a sand cast bird bath from the leaf. Big Mama certainly is producing some BIG leaves, so think I will see if I can do this. Will keep you posted. Y'all wanna try it too? http://www.gardengatemagazine.com/extras/53birdbath1.php

Yup, have that idea from several magazines (that is one of my fav mags!)! I want to make a couple this year. I want one on a pedestal and one on the ground. And hubby came home with a gnome for me for mother's day. I think that would be cute sitting on the edge of one!

Ah, CinciLou, the instant mind picture you generated (gnome on leaf) made me smile! One of our existing bird baths is finally cracked and on its way out, so give me a good sunny day and I'd like to try it, too.

@CindiLou wrote:What I love about my patch is that after I am tired of rhubarb (you can pick it all summer, it is the bugs that make you want to stop lol) I let the seed heads bloom. They are so pretty. I will try to remember to take a picture of that later this summer. Otherwise I cut off the seed heads so the rhubarb puts all its energy into growing.

I love them too. They look so exotic!

The other thing about rhubarb, it seems to grow no matter what you do to it. Of course, if you treat it good it grows better, but it is one of those things that is almost impossible to kill. Drive by abandoned prairie farmhouses in summer and you will often see those gorgeous flower spikes.

Nonna, I love the name Pie Bed, it would go so well with my "salad bar" where my broccolli, cabbage, califlower, brussels sprouts, lettuce, and spinach are growing.

Gives me an idea for a new bed. The Pie Bed. Red rhubarb in the center and strawberries all around it.

I wonder what else we could combine?

Gwynn, If your strain of rhubarb is anything like Big Momma, it will fill a 4x4 bed all by itself, and even dandelions shun the shade of Momma's leaves. The left-over, overlooked crown from the small rhubarb I sent to my sister has already filled more than one square of the Pie Bed. Being big was not a problem with our original kind of rhubarb, it bolted earlier, the stems were more sour, and it didn't have the brilliant red of Big Momma's stalks. But it's tough, still living without attention out near the pasture, sending up its flower stalks and daring the deer to take a bite....but they know better.

I LOVE rhubarb. But I knew someone who would pick it from the garden and eat it raw - not even dipping it in sugar.

Probably sucked on lemons, too!

No, let me change that to

Martha, we must know someone in common. A good friend of ours also will eat rhubarb raw. All I know is, some varieties are sweeter than others, and it was Big Momma's stalks she would eat. She also would take stalks home, mix them with blueberries and make a pie. That was new to me.

and I do love to lick lemons! LOL!

Fortunately it is possible to be

! (Otherwise, I would be very lonely, even though I don't suck lemons!

rofl..I always pick from the bed and eat the first stalk without anything! It is soooo sweet/tart and juicey! 4 yr old grson thought I was nuts. Oh and he can NOT be from my line! He doesn't like rhubarb! How rude! :!:

This is the biggest thing that makes me jealous of northern gardeners. I've tried multiple times with rhubarb and still haven't gotten a single plant through our sweltering summers. I'm trying again this year, but I'm not going to get my hopes up until I see plants make it through a full year or more. I am another that will eat that plain stalk (a little bit, it really is tart

@Odd Duck wrote:This is the biggest thing that makes me jealous of northern gardeners. I've tried multiple times with rhubarb and still haven't gotten a single plant through our sweltering summers. I'm trying again this year, but I'm not going to get my hopes up until I see plants make it through a full year or more. I am another that will eat that plain stalk (a little bit, it really is tart

Odd Duck....I used to live in Dallas (lgrew up in many places in TX from El Paso to Galveston lol) ...grrr...brother is in Justin (moved there from Irving last year) ...sister in Wylie..

I haven't been back since my brother's wedding in 1982

I so catch heck from my family but I love Iowa. Our extended family are from here! Family was in this area since early 1800's.