Hey everyone...I was wondering if anyone has ever grown celeriac?

I love celery, but rarely ever use a whole bunch before it gets tossed...and I looked into growing it but it doesn't appear to be like lettuce that you can pull a few stalks off at a time and let the rest continue to grow...or am I wrong?

I wondered if celeriac was a good alternative to celery...

Celeriac has become one of our favorite veggies, as it's cheap and plentiful over here. I don't grow it because it's cheap enough I can't be bothered! It's called celeri rave here, and it's delicious.

Here's an NPR article about it: Celeriac on NPR

It's a root vegetable -- when it's ready to dig, you'll have a big knobby-looking ball about half the size of a basketball. You cut the knobbly-looking peel away, and you're left with a big ball of white root.

You can grate it and substitute it for cabbage in your favorite coleslaw recipe, and call it celeri remoulade (celery rem oo lahd) - it's a French favorite all year round.

It goes nicely into salads when raw, too.

You can cut it into big chunks (carefully, as it's hard like a sweet potato when it's raw) and roast it like potatoes (or with potatoes) I toss the chunks with other root veggies (potatoes, turnips, parsnips, carrots, and leeks) and some olive oil, salt, and pepper, and put them under the roasting rack when I roast chicken or other meats. It's nice in soups and stews, too, as it adds tons of flavor.

You can also boil the chunks with an equal amount of potatoes, then mash it all together like mashed potatoes when it's all tender. A dash of grated nutmeg is a great complement to the celeri. Really delicious, as it adds nice flavor to the great texture of the mashed potatoes. (you can also make just mashed celeri by itself, but we don't care for the texture as much)

If I get one in the market that has stalks, I use those anywhere I'd use regular celery (it's a kissing cousin, anyway, so no one will ever know any different)

It's very high in Vitamin C, calcium, potassium, and fibre, and very low in calories and almost carb-free, so it's a great option for all the Atkins and South Beach folks, too.

Jen, I bought an herb called Par-Cel this spring, from an herb nursery. I have to admit I haven't used a whole lot of it, but it's a fascinating plant. It looks a lot like parsley, but when you taste it, it imparts a very strong celery flavor. If you can find it, that might be an option. Mine still hasn't bolted and since it's November, I am probably out of luck for saving seed.

Not my photo, but here you go: 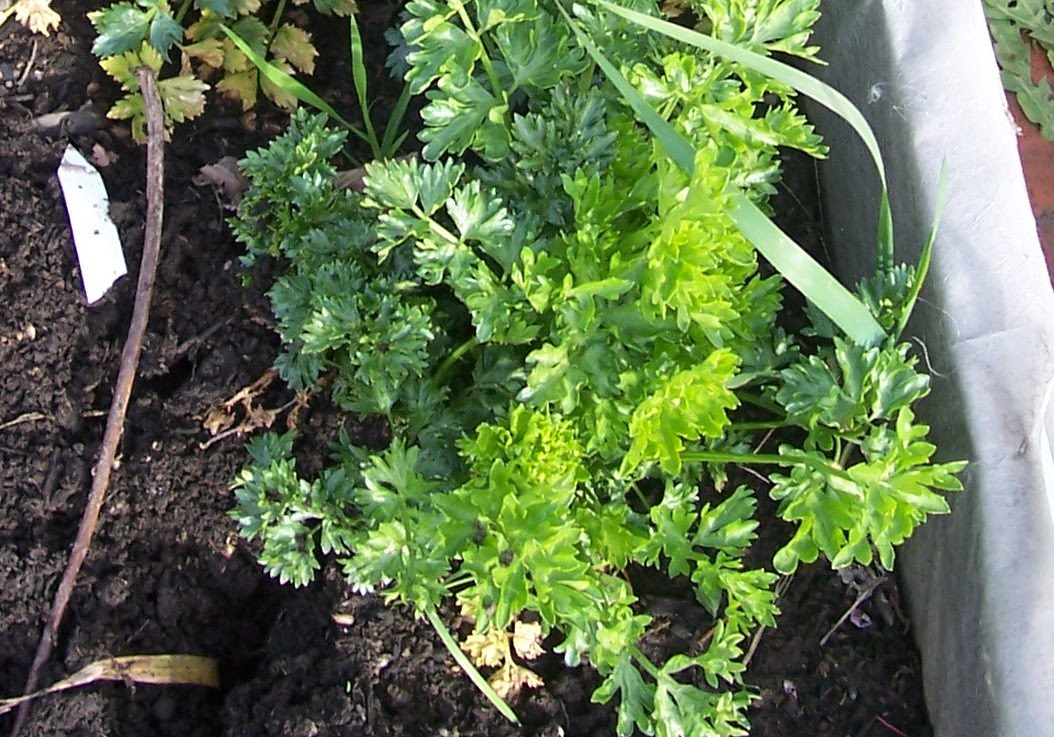 I've used celeriac a time or two, LaFee, but really wasn't sure what to do with it. Great ideas!!!

ohhhh megan that sounds great...wonder if a cutting would root? hmmm.....

I've been very curious to see what sort of root it has, whether it is a tuber (right word? rhizome?) like parsley is, or something else... but haven't tried poking around to see what's under there.

La Fee, Thank you for all that wonderful information!

I too love celeriac and got a great recipe from an old French teacher. I have not found it to grow it but I would if I did.

Aha! I searched and searched! Thanks!

Megan wrote:Jen, I bought an herb called Par-Cel this spring, still hasn't bolted and since it's November, I am probably out of luck for saving seed.

Megan, perhaps if you mulch it it will make a comeback in the spring. :?:

That's a thought. I've had herbs come back in containers before, but they're usually the woody ones. Still, worth a try!

I grew celeriac for the first time this year. I purchased the seed last year from Baker Creek and I started the transplants indoors. I transplanted nine plants to my first SFG box but I didn't have good luck with them. A few died right after transplanting because I didn't water them enough. They need lots of water to get established, then they don't have to be watered as often. Over the summer a couple more died. Now I have only three left growing in their square, one fairly large one and two small ones.

During growth they put out side shoots. You are supposed to pull those off. I'm so dense I didn't realize you could eat the leaves (head banging against wall.) I've just been throwing them away. Their leaves could have been going into soup.

One other problem I've had is my MM sunk during the summer well below the level of the box. My celeriac is planted in a corner square, and the largest root is growing right next to the edge of the box where it is difficult to get to it to pull off the side shoots. If I grow them again I will plant them in the middle of the box where they will be easier to work with.

Everything I've read says they will take a light frost but to harvest them before a heavy frost. I covered my box during our first freeze and they are still growing fine.

I love celeriac and use them in much the same way as LaFee suggested. Ina Garten has several good recipes for them. I decided to grow my own because they are so expensive in the stores. I haven't had great luck with them but I hope I learned enough this summer to be more successful with them next year.

Megan, I know nothing about Par-Cel, but your photo and description indicate that it is a celery flavored parsley.

Parsley is a biennial, so the plant comes back the second year and then produces flowers and seeds.

Copied from The World's Healthiest Foods
Parsley is the world's most popular herb. It derives its name from the Greek word meaning "rock celery" (parsley is a relative to celery). It is a biennial plant that will return to the garden year after year once it is established

Thanks ander for telling me those tips! Hopefully I will have some luck with this..got some seeds last night...from baker creek as well.

You could also try Celery Afina, which is the opposite of Par-Cel - a celery that grows like parsley.

I've just planted this (literally, last night) for my indoor container garden; research says the stalks are a little too bitter for salads but good in soups and stews. The leaves, however, are said to be great in salads.

I chose it because it doesn't need as much root space as traditional celery varieties and so is more suited to an 8" pot. And you really plant it like you would parsley, which makes handling the tiny, tiny seeds less frustrating. Germination rates are also higher than for other kinds of celery.

Best yet, it performs well as cut-&-come again, apparently, as long as you harvest from the outside in like with most other c&ca vegetables.

El wrote:And you really plant it like you would parsley, which makes handling the tiny, tiny seeds less frustrating.

What do you mean here?

I mean, you don't have to worry so much about trying to space the seeds relatively far apart and get them into neat-ish rows as you might want to with celery plants that get bigger - you can sow them more like sowing an herb, a little more randomly.

Jennie, are you asking about celeriac because you want it for the roots, or are you just wanting something to give you leaves that have a celery flavor? Celeriac (also known as celery root) is planted for its edible roots. (To me they look something like a cross between a turnip and a pineapple.)

If you just want something with a celery flavor to use in cooking, one of the other plants mentioned here would probably be easier to grow.

I was looking into celriac for a couple different reasons...I was hoping to grow celery but from whaat I read it sounds high maintanence:I was lost when they started talking about blanching etc. And I thought I could grow it and maybe harvest a stalk at a time and it could keep growing, but it didnt sound like that was possible either.

So in the same catalog next to celery was the celeriac, it seemed easier to grow that celery.

The other reason is I just kinda want to broaden my vegetable horizons. I have never had fennel, or celriac, or turnips or beets...just thought I would have a for fun, new stuff to try box.

I am going to try the Par-cel too though..the seeds are on the way!

I have no growing experience since this will be my first garden, but this is from "The Vegetable Gardener's Bible" by Edward Smith (2nd best gardening book ever!): "The key to growing good celery is organic matter. Celery has a small root system and grows best in soil rich in organic matter. Before planting, add plenty of compost or rotted manure to the bed. Add some compost to the planting hole when transplanting, and sidedress with fish emulsion during the growing season....HARVESTING & STORING: Begin harvesting stalks from the outside of the plants whenever they are big enough to suit you. You can harvest whole plants when you want to; even small ones taste good. Celery can survive light frost if covered. For best flavor and longest storage, water plants the day before harvest. Celery will keep in the refirdgerator for a couple of weeks or longer in the root cellar. SPRING CELERY BONUS: Before the first frost, dig plants and replant them in buckets (w/ drainage holes) and place them in the root cellar and water whenever they begin to droop. You can enjoy crisp, tasty celery all winter long and into the spring."

The book also mentions a bit about Celeriac and says that it's not as fussy as celery and should be grown the same way. Also, during the winter you can plant a celeriac root in a large clay (not sure if it has to be clay) pot in damp sand. Place it in a sunny window at room temperature and keep the sand moist. In a little while you'll have small celerylike stalks and greens for fresh winter salad.

Thanks Lemonie...I have wanted to get a few more books like this one you mention....just haven't lucked out on finding any used and new they are just so expensive.

Similar topics
» celeriac
» Celeriac
» What are you eating from your garden today?
» celeriac spacing
» Update and thanks