My broccoli and cabbage have survived the first wave of caterpillars. They were those green fuzzy ones. They weren't to bad just go out and squish them 2-3 times a day. Now I have a new caterpillar crop. These are tiny green and black. They seem to colonize together. How in the world do you keep up with those? I really don't want to use anything in the garden that will effect our dwindling bee population ( we are 50+% down from last year in my area). I love brassicas but it is looking like I may never grow them again. I grew collards almost all year last year with very little problems.

This is my first time growing cabbages and broccoli. Are there any Brassicas that these caterpillars don't like? Spring vs fall?

I have also seen a tiny black fly on my tomato plants. It doesn't fly away it just sits there. Is that a goody or a bady? My camera takes horrid pictures and wouldn't focus on it.

I don't know it is me or not but this year already feels like a battle out there. 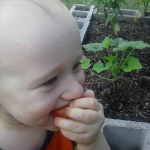 Swilliams, sorry to hear about your caterpillar problem.  The very best thing I've found to take care of caterpillars (and squash vine borer for my squash plants) is to cover them with tulle from the craft store.  It's very cheap, usually about $1 a yard.  I got enough to cover most of my garden a few years ago for $10.  Then I bought some hula hoops and some hardware and made this: 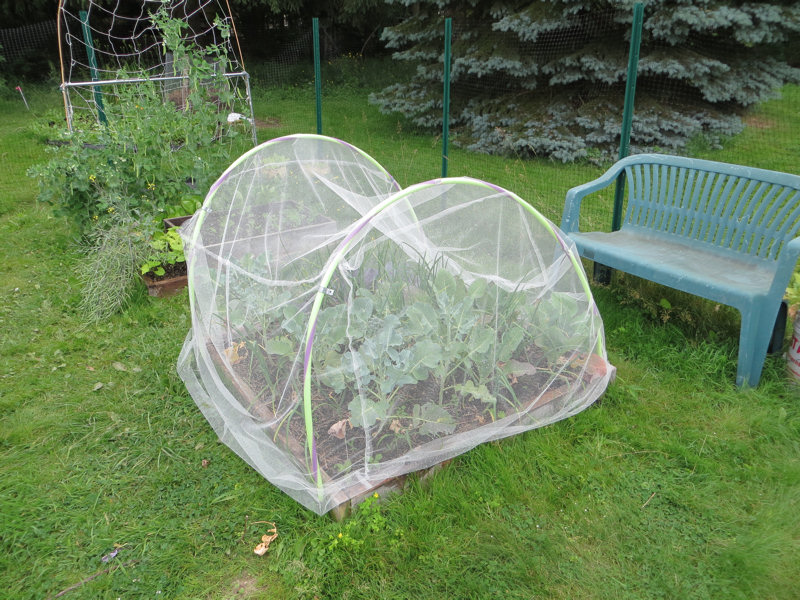 Don't give up on cabbage and broccoli

You just have to outsmart the bugs.  It's funny that you ask if there's brassica that the bugs don't like, because collards are brassica too, and yet you said you had no problems with them.  Also, I've never had problems with turnips, kale, or rutabagas for some reason.

I am no stranger at the fabric store! I would have never thought to use that in the garden!

If they are cabbage worms...

If the pests in question are cabbage worms, you can use a safe alternative that works quite well.  We take cayenne pepper-infused water and add drops of eucalytpus oil to the solution and then spray our greens after the sun sets and when the wind is not too strong.

I advise to wear protective eyewear and surgical gloves when working with cayenne pepper oil.

I am not comfortable with BT.  It is the BT GMO product that is bringing Monsanto a lot of their negative press.  The BT is showing up in toxicology reports in pregnant women, and it is killing human embryo cells.  Not enough studies on the BT itself have been conducted for my liking.  Take a look at the peer-reviewed medical literature I have posted below:

Pesticides associated to genetically modified foods (PAGMF), are engineered to tolerate herbicides such as glyphosate (GLYP) and gluphosinate (GLUF) or insecticides such as the bacterial toxin bacillus thuringiensis (Bt). The aim of this study was to evaluate the correlation between maternal and fetal exposure, and to determine exposure levels of GLYP and its metabolite aminomethyl phosphoric acid (AMPA), GLUF and its metabolite 3-methylphosphinicopropionic acid (3-MPPA) and Cry1Ab protein (a Bt toxin) in Eastern Townships of Quebec, Canada. Blood of thirty pregnant women (PW) and thirty-nine nonpregnant women (NPW) were studied. Serum GLYP and GLUF were detected in NPW and not detected in PW. Serum 3-MPPA and CryAb1 toxin were detected in PW, their fetuses and NPW. This is the first study to reveal the presence of circulating PAGMF in women with and without pregnancy, paving the way for a new field in reproductive toxicology including nutrition and utero-placental toxicities.

I have officially removed all the brassicas from my garden. I am feeling very defeated at the moment. Now my 4X8 bed is half empty and I am struggling to decide what to plant in there. I already have 12 tomatoes, okra, some peppers, summer and winter squash, beans, and cucumbers planted. Tomorrow I am going to add some compost back to the bed along with more peat.

Time to plant sweet potatoes!
or peanuts or Yard long beans or any of those other love the hot steamy South plants that I (in Montana) can only day dream about.

It is late season for your cool weather plants and time for me to go plant them.