Globe Artichoke
The globe artichoke Cynara cardunculus var. scolymus is a perennial thistle of the genus Cynara originating in Southern Europe around the Mediterranean. It grows to 1.4–2 metres (4.6–6.6 ft) tall, with arching, deeply lobed, silvery, glaucous-green leaves 50–82 centimetres (20–32 in) long. The flowers develop in a large head from an edible bud about 8–15 cm(3.1–5.9 in) diameter with numerous triangular scales; the individual florets are purple. The edible portion of the buds consists primarily of the fleshy lower portions of the actual artichoke and the base, known as the "heart"; the mass of immature florets in the center of the bud is called the "choke" or beard. These are inedible in older larger flowers.
I have chosen this topic because it is my real challenge this year, moving from an area that they almost grow wild, to an area that they do not grow at all, I have had to learn a lot about them.
They are a perennial plant that flowers in their second year. The flower is very beautiful and many people grow them just for the flower. (but it is inedible)
The plant takes up a lot of space and so in some areas they also make great landscaping plants, much like having shrubs. I grow them for the fruit.
They grow best in well drained soil, and very nutrient rich, they are heavy feeders. The best crop I ever had was when I added chicken manure around the plants. They also prefer a low nitrogen soil.
They grow best in cool climates 55-65 degrees F (13-18C) and they do tolerate mild to medium frosts. (zones 7 and 8 ) However this is the kicker for me, in that they do not tolerate frosts below 10 degrees farenheit, and only flower in the second year. So the conundrum is how does someone in one of the colder climates grow artichokes?
One method is to grow them from seed, early in the year, and then stratify them, by putting them outside as early as possible even before the last frost to essentially “trick them” into thinking that they have survived a winter. They SHOULD then fruit.
There are other options.
One is to grow them in containers and bring them in to a cool room for the winter (some people dig up the tubers and store them in cool room)(sort of like one would with their bulbs in cooler areas)
I covered mine with several layers of straw and then a tarp, and a few overwintered. They do not like their roots to be dried out in the summer or waterlogged in the winter.
In the spring you can divide the tubers making sure that each tuber has at least 2 shoots and good roots.
When harvesting be sure and pick before the scales open, or leave them to flower. (very beautiful)

The way I cook them, is to boil them in large pot with salt and lemon, for about one hour.
I then use this recipe for a dip.
balsalmic dip


Aphids and ants seem to infest artichokes and suggestions are to grow marigolds around them. Another way I have used in the past to get rid of aphids is to wash the plant with a hose frequently and basically just wash off the bugs. Artichokes can survive a heavy scrub with a hose
Here are a couple of pictures of my artichokes 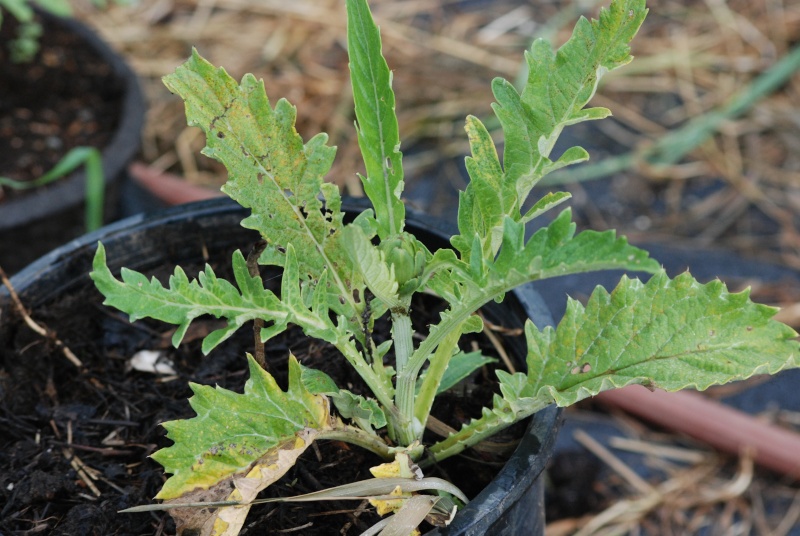 Thanks for great, and very informative Rookie Topic Gwn

This is my first shot with artichokes, and mine were germinated indoors in soil cubes. Two sprouted in mid-February, 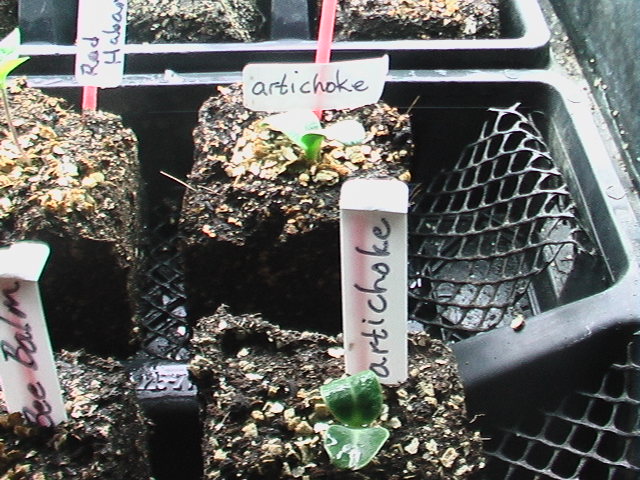 and two in late-February. 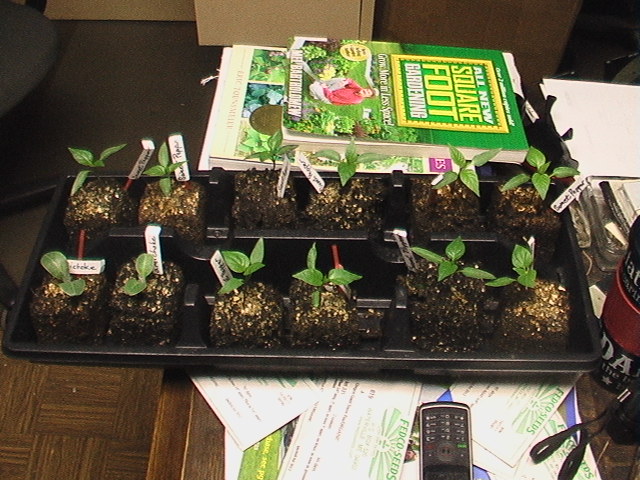 They were acclimated on my basement stairs
and further in my hoop house... 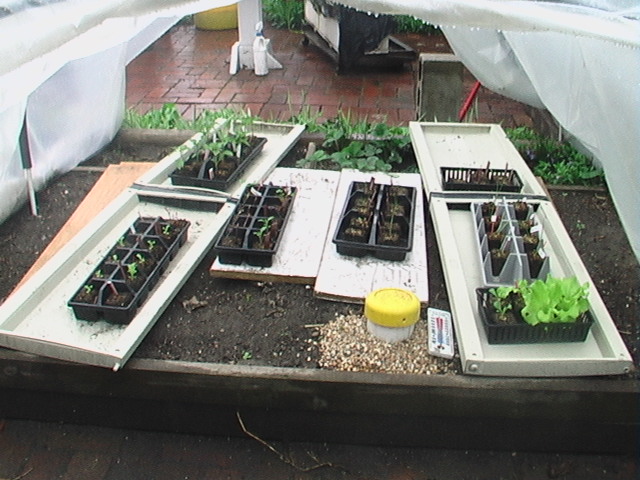 In mid-April (I think!) they were all planted outside. Here's what they look like now! 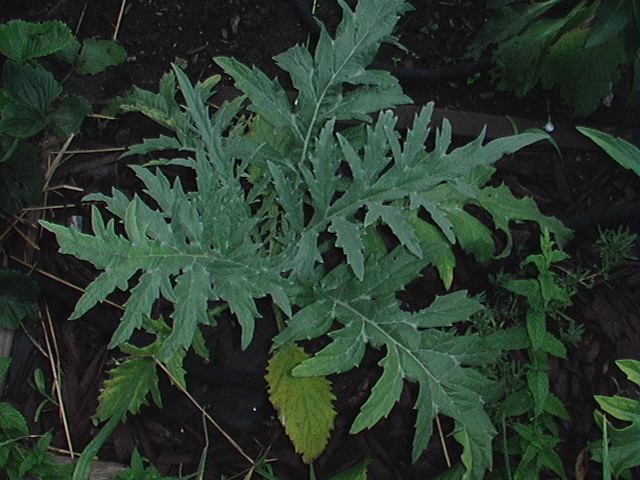 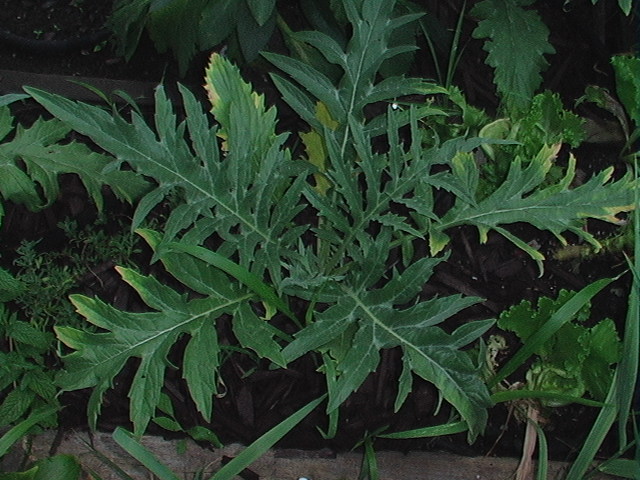 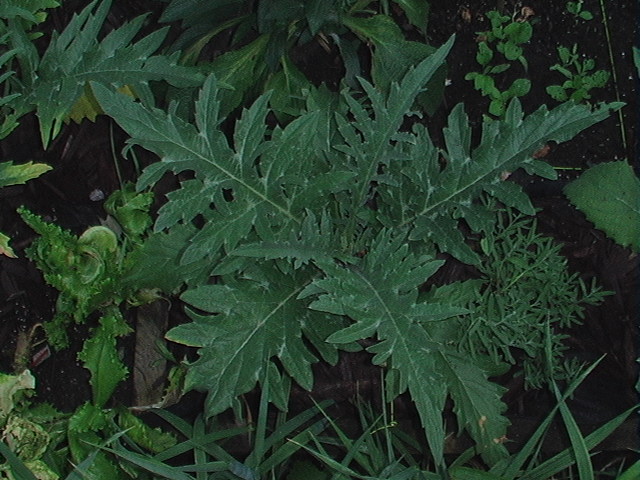 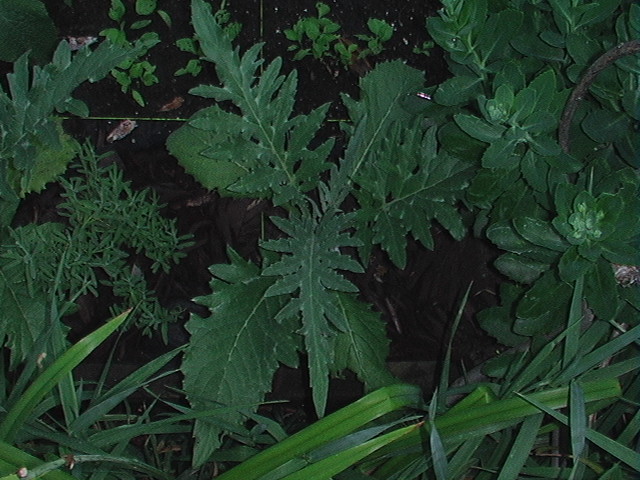 Don't see any buds, though!
I hope I can grow them through 'til next Spring. 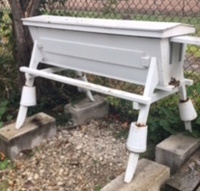 My favorite recipe for artichokes is from Gorden Ramsay Braised artichokes, OMG divine! here are a few other recipes.
http://www.lifestylefood.com.au/recipes/collections/artichoke-recipes.aspx
____________________________
43 years a gardener and going strong with SFG.
https://squarefoot.forumotion.com/t3574-the-end-of-july-7-weeks-until-frost

Love the pictures WP! Good luck with the artichokes and as always, great to see you on the forums

I have about 20 plants, some look much better than those, but those are the first artichoke buds. We really have not had any warm weather yet here, so I am expecting them to just take off as soon as better weather comes

I hope I can grow them through 'til next Spring.

That was me last year, I got one flower/bud and that is all.
So heavy duty protection in the fall winter, we had a lot of freeze thaw etc etc, so finally on a warm day in the spring I dug them up and put them back into pots.
I had read that they do not like the really wet of the spring. and indeed, the plants that did not make it was basically rotted.

we started them by seed indoors and transplanted them into large pots....they grew wonderful.....then someone let me know that their roots can go deep.....like 5 feet....so we transplanted them into the ground.....the roots looked pretty good...didnt look to root bound....but...they are still young and i can see how they would not like living in a pot for much longer.....

when i get a chance i will also take some pic's of plants that i see growing around our city....they are HUGE!.....there is a wonderful plant at our school garden too!....i will try and get a pic of that

....its so neat to watch my kids point out plants as we walk or ride around town.....they come home from going with dad and tell me they want to show me someones garden......this last time it was a really big artichoke.....they said * you gotta come see this mommy...you wont believe how big it is!*

he would have never wanted to try it...if it wasnt for the fact that we planted some and he is watching it grow and decided he would try some that we found at the store....we steam ours and dip in butter.....yummy!!

Two days ago we spotted a bud on one of our artichoke plants!

Here are a couple pics. 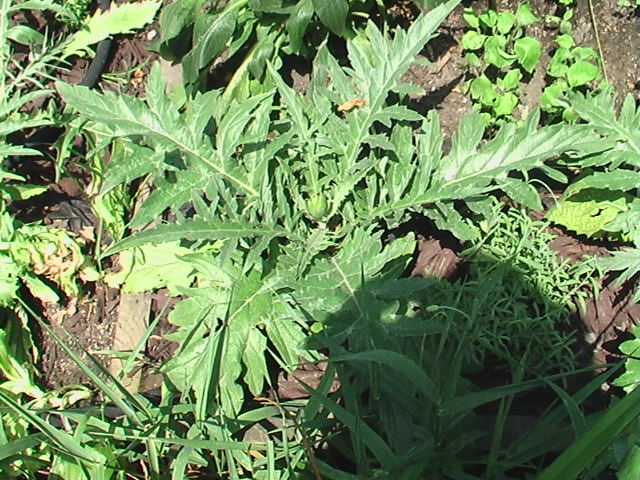 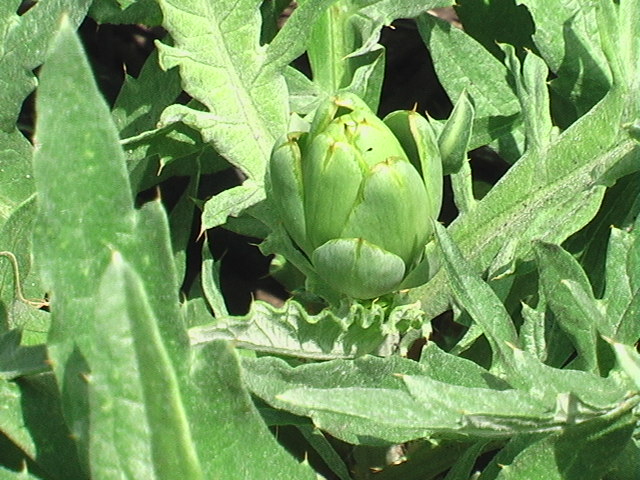 here is our two plants

they were in pots and now in the ground and doing very well!..very cool windsor that you have a flower 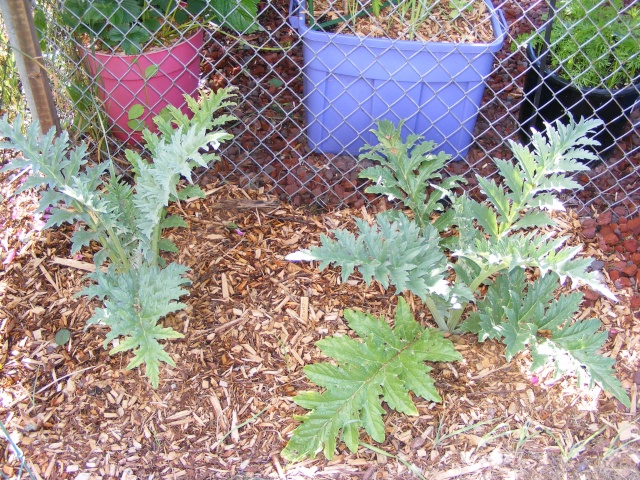 Maybe third time is the charm.

mine are doing remarkably well, they are not really big leafy plants however I now have several that have buds coming up.
A couple I am watching we could be eating soon.
BAD time to go away for a week

First year to grow artichoke, it seems to be doing good.

I have gotten worried that mine might flower so we are going to be eating them tonite. In the past I have found that when I harvested some, then cut back the plant, it came back and grew a few more in the fall

we have a baby 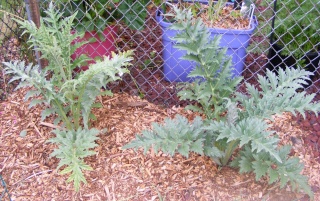 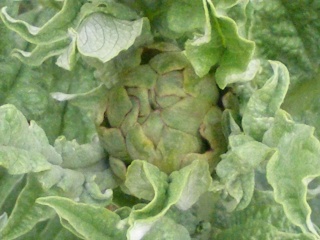 congrats....
When are you going to eat it? We made a small meal of 6 of mine, they were small but the centres were very very good.

I love artichokes! All your plants look so good!

We've decided to let our only bud, thus far, flower! We have three other plants, but no more buds yet.

this is our first year

......we have two plants and so far only one has a flower

.....we had a really warm May and then it cooled down in june and then warmed back up again in july.....that might be why our first year artichoke flowered

its not big enough to eat just yet

since this is the first time to ever grow an artichoke and it being their first year we decided not to eat them and watch them flower..... :drunken:

here are our two plants.....one gave us two flowers and the other one has no flower...... 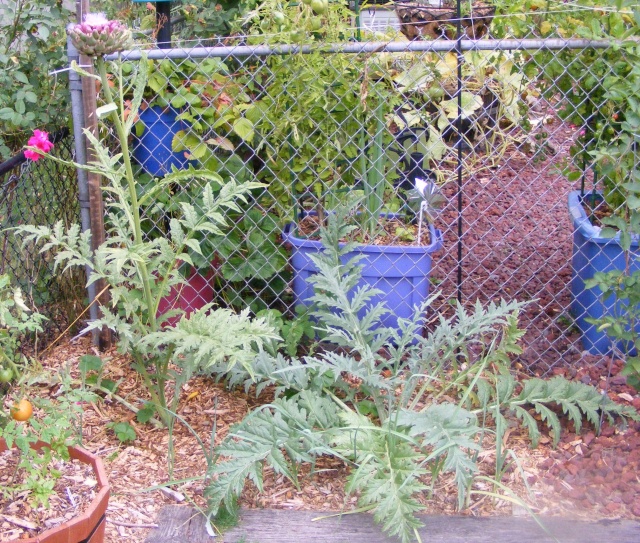 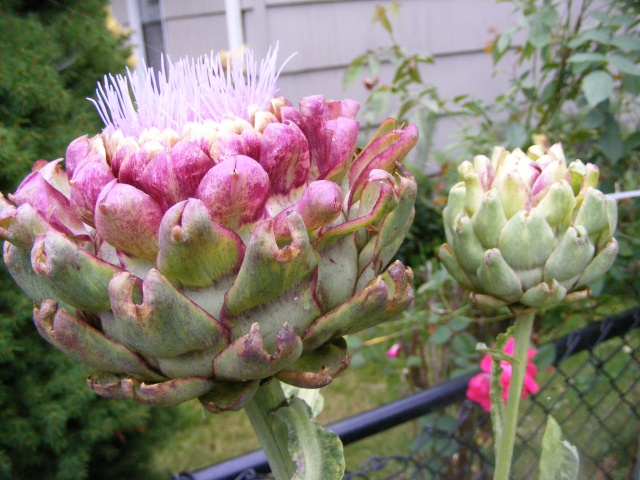 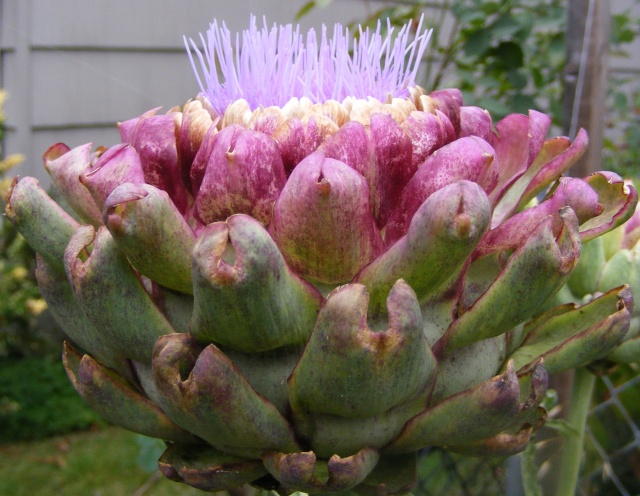 so surprised to find this purple center 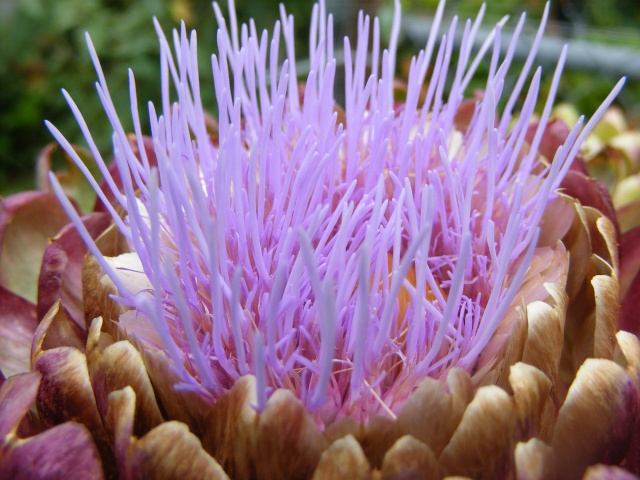 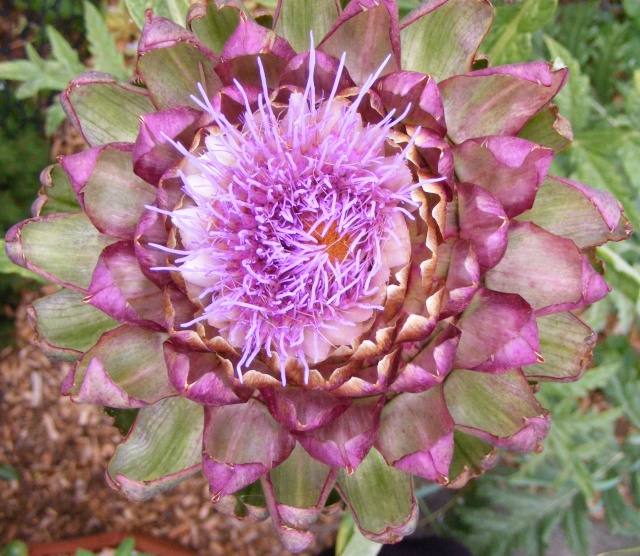 how are your artichokes doing?.....would love to see pics!

wow those are beautiful, I have never let mine go to flower.
I have lots and lots of artichokes, I am thrilled with how the crop went.
Unfortunately we have eaten them all, however lots more coming on, and so I will be sure and take some more pictures.

Thanks for sharing.
Janet

thats awesome GWN that you have been able to harvest and eat so many!!

Is there a secret to getting artichoke seeds to germinate. I love artichokes. Last year and this year I tried to germinate the chokes in soil cubes (with a heat mat) but none seem to germinate. Any secrets to germination. My seed variety is Emerald from Ferry Morse.

I bought two young artichoke plants from Lowe's today because I can't get them to germinate. The variety is Green Globe from Bonnie. The label says the maturity is 120 days after planting so I asssume they are 2nd year plants.

The secret is Patience
They are slow to germinate. But not that slow. I did nothing special and I grew several varieties last year.
My latest way to germinate has been to lay out a piece of wet paper towel and lay the seeds on it, fold up the paper towel, stuff it in a baggie, label it and put it on top of the hot water tank
Works like a charm. Just check every day to see signs of rooting and ASAP put them in potting medium