Hubby had the brilliant idea to convert the existing raised non-MM bed into a SFG. I wanted to expand boxes, and he felt the rhubarb and compost bin 'wasted' the existing raised bed. The rhubarb in it will be moved closer to the house as landscaping and the bin will move between box 3 and 4. North is the long side where the worm tubes are. 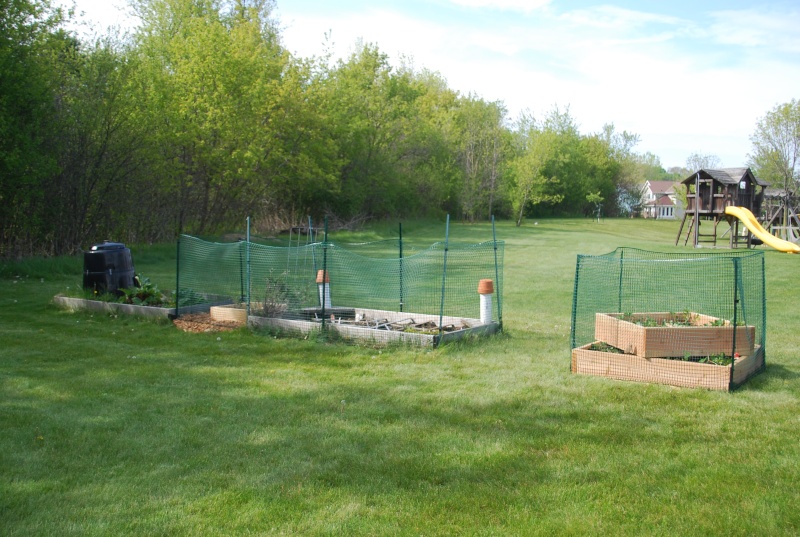 The plan is to build 2-4' long trellises as directed in the book for the new bed. The 3rd box has a 6' trellis, pic taken before trellis.

The Jack Be Little mini pumpkin variety packet says to thin to 3-4". So that's 9-12 seeds per square?!? I attempted regular pumpkins in a traditional garden many years ago. The vine was huge, and that was my only other time to grow any kind of squash.

Should I plan to plant mini pumpkin in 1 square but leave a 2nd open, as suggested for winter squash? 9-12 in one square, really?

Somewhere I read here that Jack Be Nimble gets 5' tall. I don't know the size of a piece of cattle panel, so I don't know how tall that trellis would be.

Cattle panels come in sections 4 feet by 16 feet, so you can cut them whatever size you want them to be.

I have strawberry popcorn and pole beans as companion plants planned for this new bed.

Could I plant the mini pumpkin in this as a 3 sisters planting, let it spread on the ground, then grow it vertically on the north trellis?

I got some great information from another member on here about those Jack Be Little mini pumpkins that she grew with her son. She had a 4x4 bed. She planted two vines on the north side of the bed. That's one plant per two squares, like the squash spacing recommended in the book. She trained them up a trellis - if I recall, she built the conduit trellis just like in the book.

I am hoping to grow Kakai Pumpkins up a trellis (cattle panel) this year. 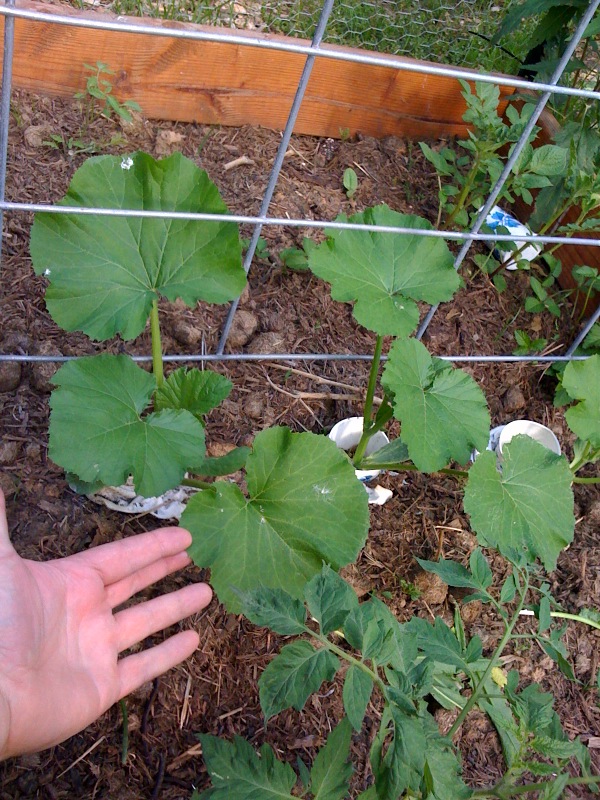 picture of full cattle panel in place between two tabletops.

I'm growing watermelon and cantaloupe over on side and tomatos over the other. Be interesting to see what happens when they meet in the middle.

Beds are about 4'apart

this fall i'm planning to cover my back garden, which is fenced, and make a greenhouse. if i used cattle panels, i could have a greenhouse in the winter and a trellis in the summer! i could probably grow cool-weather crops underneath it in the summer too!

i'm so excited, and i just can't hide it.

THANK YOU FOR POSTING THAT PICTURE!!!

Photo credit goes to member mschaef. You can see she has a 4'x4' box and the classic conduit trellis from the book. She has two mini pumpkins planted in the back that she trained up the trellis. You can see the leaves do indeed get huge and she trimmed them whenever they got in the way of another plant. She got a bunch of little pumpkins. I think she said ten on each vine. 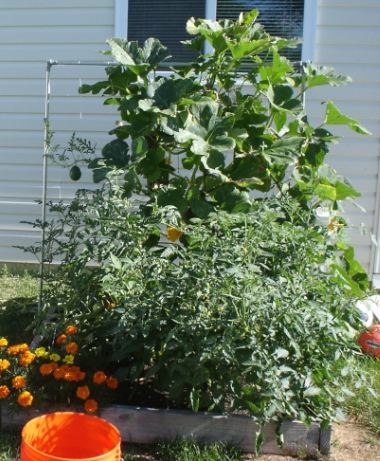 I'm using cattle panels for most of my trellises. Should I weave the vines of tomatoes, squash, etc. or tie them to the panels. Thank you!

Don't know that it matters, but I'm tying the tomatos and allowing the melons that have tendrils to curl and catch to just do their thing. Although I am trying to direct the tendrils to a rung.

rowena___. wrote:
this fall i'm planning to cover my back garden, which is fenced, and make a greenhouse. if i used cattle panels, i could have a greenhouse in the winter and a trellis in the summer! i could probably grow cool-weather crops underneath it in the summer too!

When I was at Tractor Supply buying my cattle panel the guy who was helping me cut them to length said someone had come in earlier and bought them to do exactly that. They used them to make a greenhouse.

If I had the space, it is what I would do as well.

When I was at Tractor Supply buying my cattle panel the guy who was helping me cut them to length said someone had come in earlier and bought them to do exactly that. They used them to make a greenhouse.

that's good to know. thank you! now all i have to do is sweet-talk a friend into letting me use his truck. LOL

...i'm about to lose control and I think I like it..... made me laugh Rowena, Great foot stomping song!