My Matt's Wild Cherry has the first baby tomatoes of the season! Yay! Lots of flowers starting to open on other plants, so I'm hoping for more and more over the next few days!

Here's a few pics of how things are growing here. 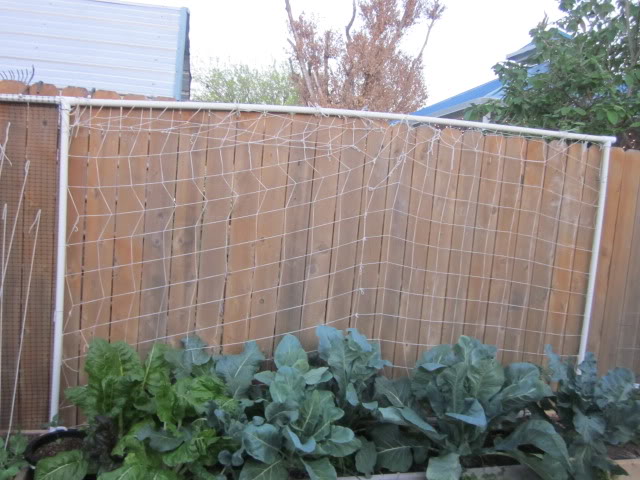 This bed is still mostly filled up with winter stuff. Lots of huge broccoli/cauliflower plants. Really getting too hot for them, but I've got a couple of them working on secondary shoots and the first cauliflower head is forming (finally!). Afraid it'll just "button" with the heat we're having. Swiss Chard is going absolutely crazy and I've not found much to do with it that anyone in our family will eat. 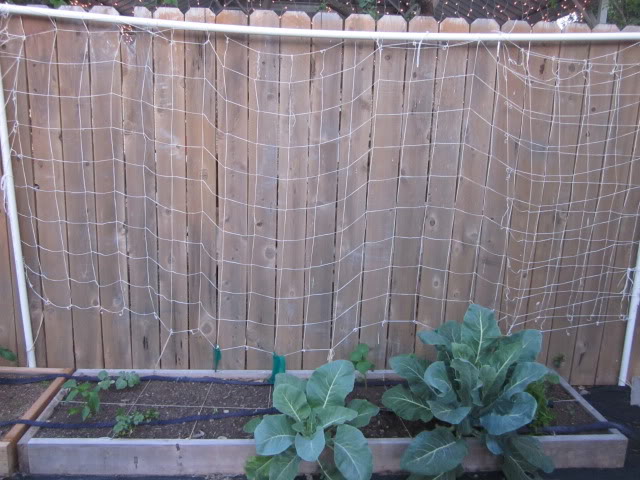 Most of the winter stuff is done here. Got a lot of good broccoli and peas out of this bed! A few new things getting started: Pepper, cilantro (regular and slo-bolt planted in adjoining squares), melons, and okra. Still some squares to fill in. 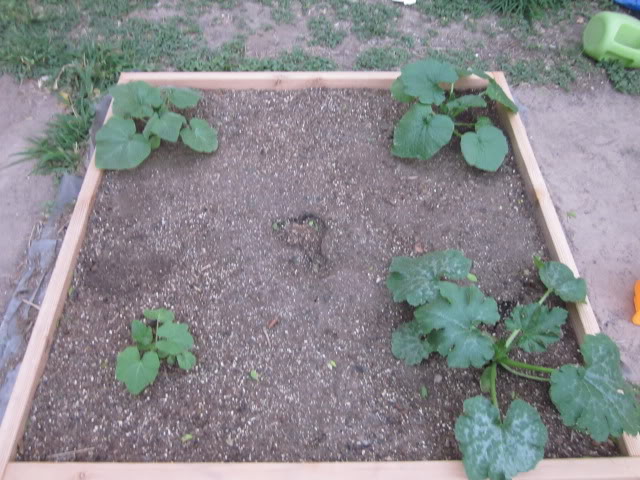 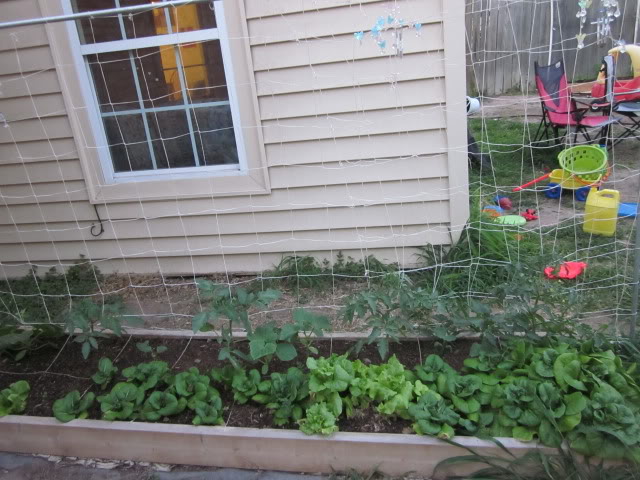 Lettuce still going from winter. One day last month I went to thin some of the lettuce and ended up sticking it in squares where I'd had poor germination. It was over 90 degrees that day, I plopped them in during the heat of the day, and somehow they survived! Tomatoes, cucumbers, and a vining squash going in the back. 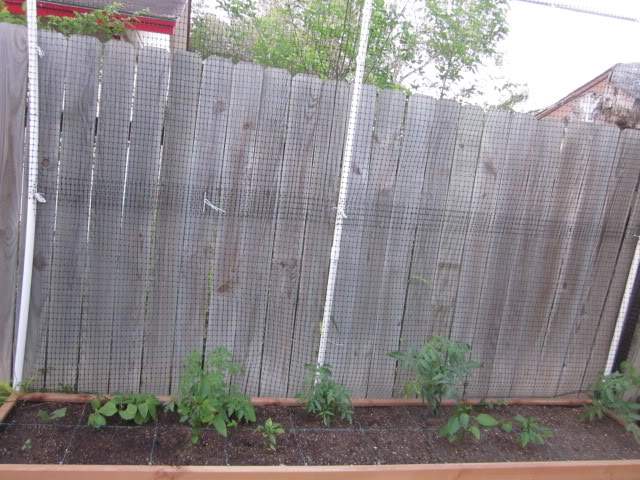 New bed with tomatoes, vining squash, okra, peppers, pole beans (not many coming up...need to replant)...still some squares I need to fill in. The one eggplant seed I finally got to germinate will probably go in here. 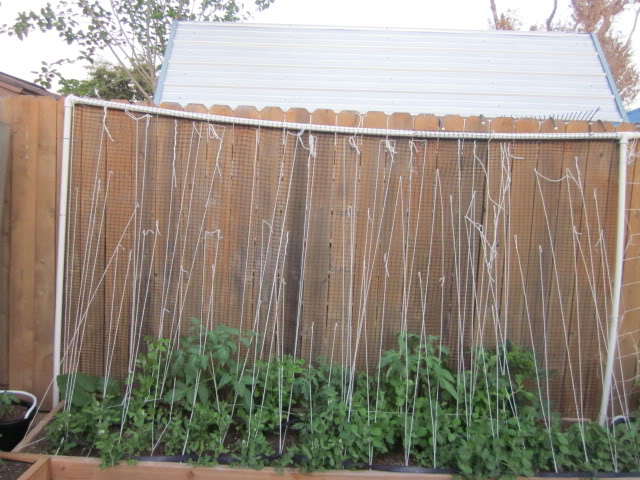 This box is the battle of the tomatoes and the peas. The front boxes are dwarf varieties, the peas in the back are Golden Snap Peas. Oh, and there's also a vining squash in the corner. I think I'm going to have a bit of a mess on my hands, but the peas will be gone before the tomatoes are too terribly wild. 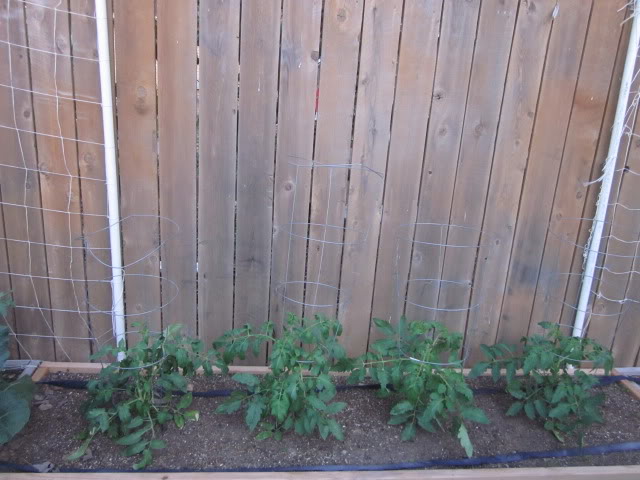 Rio Grande paste tomatoes (determinate) with carrots and onions planted along the edges of the bed just for fun. 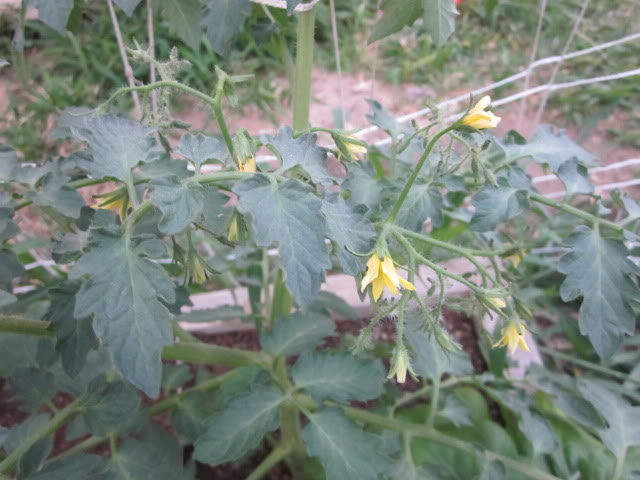 Riesentraube blossoms. I thought these would be the first when I took the pictures yesterday, but Matt's Wild Cherry surprised me today.

How exciting! Great pictures of all your plants. They look so healthy.

Congrats..... MWC's have been one of my favorites over the years (and thats saying alot from a "slicer" guy.

I usually keep a red cherry and yellow cherry going year-round (my wife likes the cherry tomatoes better than the slicers). MWC is usually my preferenve on the red cherries & honestly, I'm usually disapointed when I stray from MWC's & try another red cherry variety (out of boredom).

Yea! And I hope you love those golden peas as much as I did.
I'd post a pic of my first tomatoes, but none of the plants have a true leaf yet.

Debs....not sure if it ever actually got up to 90 in the PNW last year.

In Maine we're still in dreamland with snow covering our gardens.
Its nice to see greenery elsewhere. It gives one hope.

Matt's Wild Cherry is a favorite of mine as well. Its one I planted for the first time last year and one of the first to produce. I could count of getting a handful or two a day to nibble on while I checked out the rest of my garden plants. Mmmmm good. And it was one of the last to produce before frost. A good plant. 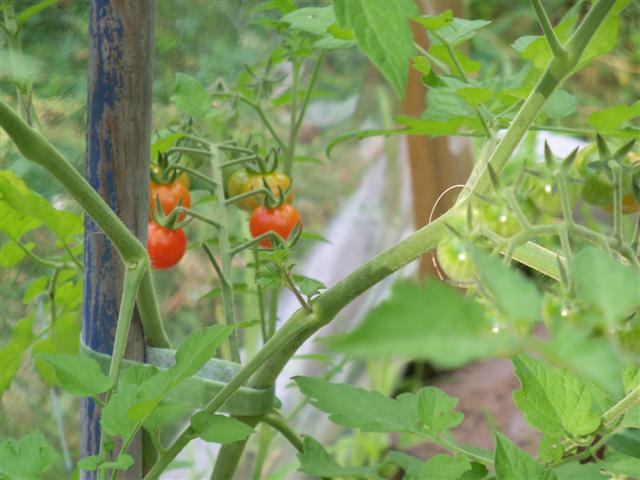 You must have brought us all good luck ..... got 'mater sightings here too !!!

Yellow Cherry (another frost damaged plant that I didn't expect to recover)...

Yay! Kinda makes me wish I'd left in the one plant I had left after our freeze at the beginning of February, but I decided to just start fresh and ripped it out. This is is the first time I'm growing tomatoes from seed and I'm loving every minute of it. All my plants are right at the point where they are taking off and it's quite the challenge to keep up with the suckers. I need to improve my pruning skills or I'll end up with a jungle like last year!

@elliephant wrote:Yay! Kinda makes me wish I'd left in the one plant I had left after our freeze at the beginning of February, but I decided to just start fresh and ripped it out.


I think yr better off doing that. Usually post-frost damage production is just a tease (for tomatos). Fruit is typically smaller & the plant bears much less. Of course there are exceptions to every rule.

Honestly I noticed the fruit on the cherry tom's while I was canibalizing trellis pieces, prior to tearing out the bush & didn't have the heart to rip it out with fruit on it.