SFG book says 8 per square for Pole Beans and 9 per square on the snap peas....

Have any of you actually done that many a square?

I have planted the pole beans at 8 per square. I have planted Rattlesnake (the best) and McCaslan in opposite ends of a bed. Per each square, I used a single 7 foot pole with 4 sturdy twine pieces coming down from the top to stakes at each corner of the square. I then planted two beans near the base of each stake. Worked fine for my first SFG Fall 2009. Problem was the vines were so close.
This past year I planted the beans in 2 squares at base of one of my arbor sides. I planted 8 per square, near the back edge in a staggered or zig zag pattern. They climbed well up and over the top! This was much easier to deal with.

I planted sugar snap peas at 8 per square. They were planted at back of square with a trellis in the zig zag pattern. They grew about 2 - 3 feet. They did well.

I think the 9 per square you mention is for bush beans. I did that, too, in 2009. They did well in 1 square and grew basically straight up. My only issue was they made once, and then not much after that. I think most bush beans work that way or could have been my heat. The pole beans planted in Spring 2010 produced in the spring, went a little dormant during high heat and then produced tons this past fall.

I'm going to try a bean from Native Seeds this year that may produce more into the heat.

Either type of bean was great, which one you use may depend on if you can let the bean go up (pole beans) or only can have room for bush beans. If you go with bush beans, then I would allow for successive planting in 3-4 squares over a 4-6 week period (1 square 1 week, another the next week and so on). That should help with stretching out your harvest.

I had two squares of pole beans (3 in one, 4 in another square), planted diagonally opposite in a 4x4. Each next to a trellis that I had something else growing on. Trust me that this is NOT a good idea. Pole beans do not share well.

More specifically, if the other plant(s) on your trellis finish out before the pole beans do, it's REALLY hard to get them off the trellis so as to start something else, with the thriving pole beans wrapped all around them.

Also, even though the 2 squares were diagonally opposite each other AND growing up different trellises, beans from one of the squares jumped trellises and then I had pole limas growing into the Cherokees. Gah!

I can't imagine 8 or 9 to a square, having seen what 4 does. But obviously lots of people have done it.

Even with just 4 plants, you will be playing "hunt the ripe ones" quite a bit when the plants get nice and lush.

I have only done bush beans before this year BUT for all of my peas (including snap) I did 16 (4 x 4) per square. They did fantastic.

Deborah....who remembers people asking if I was going to thin them at all.

I used trellis netting between 7" tall fence posts and planted sugar snap peas in 2 'train-track' rows toward the northside of 4 square foot blocks about every 2" apart. Mine did well growing just beyond the top of the trellis and produced all summer long as long as I kept picking them daily before they got too large. 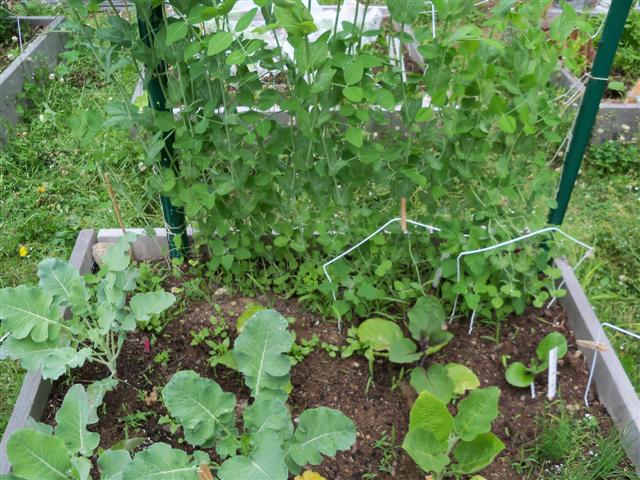 This year I plan to sow pole beans but have never done so before.

Pole beans (in my vast, one year experience of two varieties!) start out all innocent, and then then get to the top of the pole or trellis and bust loose branching out every which way. The blooms are really pretty, though, and you don't have to worry about pollination. The blooms are pollinated before they open, from what I've read.

They will wind really, really hard around a trellis and several beans will wrap around each other given the chance. They do not seem to strangle each other, but if you have a nylon trellis (as I did) it will take you quite a while to try to salvage the netting when the season is over. My Cherokees set beans in clusters of 5 and a very specific pattern....and I think the limas did so in a different set number... I'll have to go back and see if I actually wrote down what they did do. Different blossom colors, too.

My apologies to any experienced gardeners who have grown pole beans for decades....just hoping that my first year's observations may help someone else out.

Here are cherokees in late June of last year. They are still in their "innocent" phase: 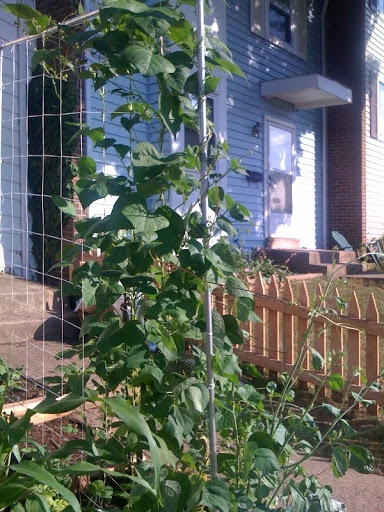 Fast forward to the end of September. This is a different angle, the cherokees are on the trellis closest to the camera, and have already died back a fair bit. (At full bore, you could not see the trellis supports they were on, at all.) They got into the trellis to the left and tried to jump beds to the SFG behind them, but I stopped that one. 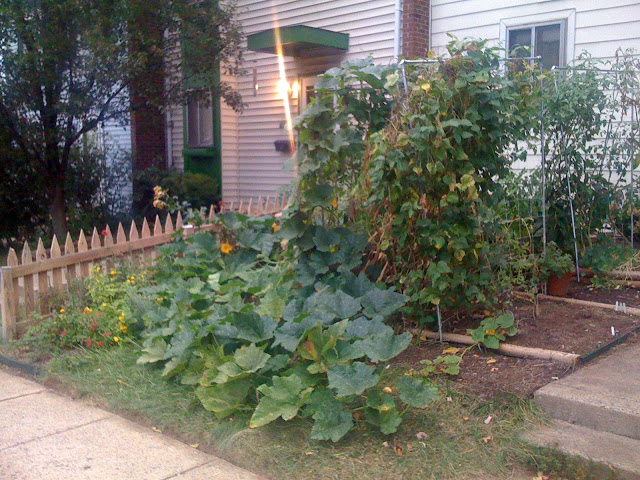 thanks everyone! Camp what did you grow them up?

Megan and quiltbea, thank you for the pics!

Jane! Thanks for the great detailed explanation...it is ALWAYS nice to hear from you!

I see the disadvantage Megan to the netting the way you describe...I did a tee pee style trellis last year for 4 plants I think I may do that again just with more poles and the twine like you described Jane....thanks for all the help everyone!

Camp I would love to see some pics of those!

These are our current sugar snap peas.( Love these!!) We harvested our first pea on thanksgiving and they are still going crazy! My hubby made a bamboo trellis.... not sure what he was going for, but sometimes they just have to do their own thing. I have had to add some added support on the sides to get us through! Will be using the conduit trellis in mels book. We planted 8 per square. I do have to hunt the peas out. Sometimes I find a monster that was missed. My nephew is out there everyday after school picking peas and eating them! they are at least 4 feet tall now.

My trellis set up was similar for both peas & beans, a steel conduit frame with jute twine. Quite sturdy! During garden clean up, instead of fighting the tenatious vines I was able to cut the twine and compost all. 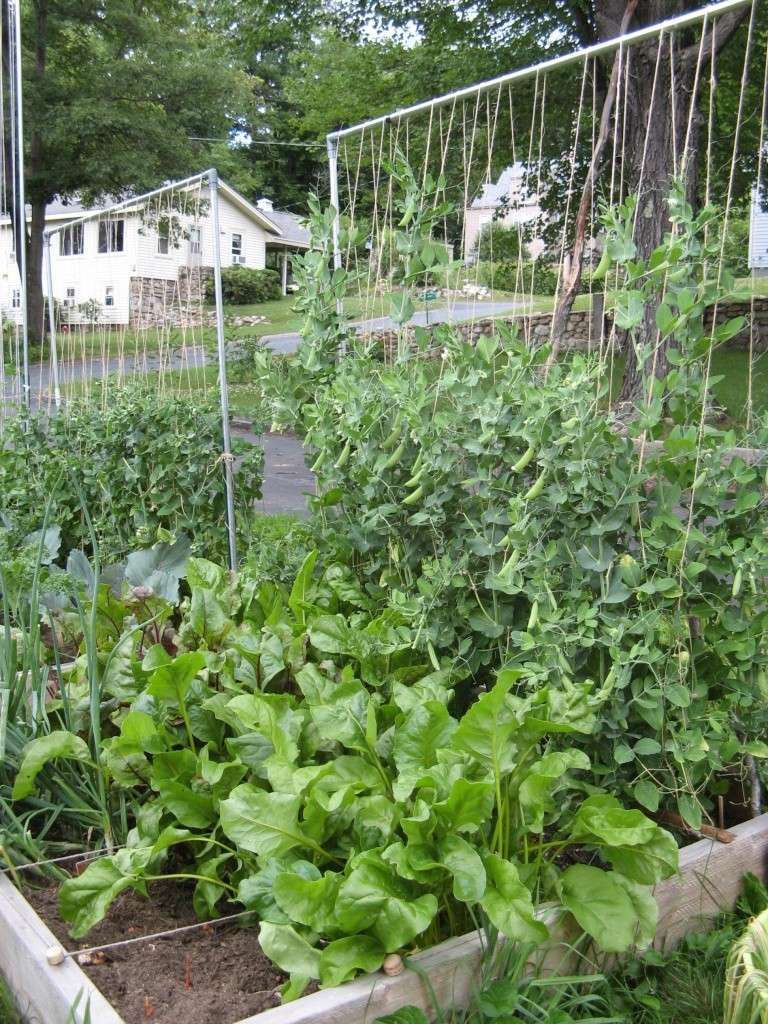 We always made tepees in our old garden from either cane poles or saplings we cut in the woods. We never added the cross pieces as in the tuteur plans I found. I planted around six to eight plants at the base of each pole. They worked fine, but I think it's much easier to train them to trellis strings. I planted mine last year 2" apart in two staggered rows at the back of two squares in a 1' x 8' box next to the trellis fence. They didn't do well in my bad batch of MM, but some of them grew to the top of the strings - they just didn't make beans. I tied the strings two inches apart for the pole beans and trained two plants to each string. If my plants had grown well I'm not sure spacing that close would have been a good idea. I think this year I might set the strings four inches apart and train four plants to each string to give more room for the leaves when training them to the strings - does anyone have an opinion about that?

I do like the looks of the tuteur and I might try making one just for the heck of it to free up some trellis space.

My early bush beans didn't do well, either, I think because of the heat, but the ones planted in August did great. Some varieties just don't like 100+ degree days. In my old garden my pole beans nearly always lost most of their leaves in the heat of summer, but they kept right on producing beans. They're ornery old things. (Like me.)

Mine went up my trellis, which had upright strings 4" apart, and it worked well. I ended up with 1 or 2 vines per string and for 2 plants it seemed like a good spacing. I think maybe I will do a 1x box (1x4, maybe) and run the strings straight down the middle, then bring the seedlings up on either side of the string. Which now begs the question of what is going to hold up the strings.... hm.

In my limited experience, peas will climb anything. I grow my peas in a long narrow bed in a single row on either side of a rigid cattle panel. I planted my pole beans 9 to a square and got a TON of beans!

I put a spiral support in each corner of the bed and connected them at the top, then I used string to train them across to my clothesline, which they happily decorated. And the beautiful flowers are wonderful too! Different color pole beans seem to have different colored flowers. Runner beans look gorgeous, but I haven't grown them because my husband loves pole beans

My big dream is to come up with a round bed that's open in the middle, and grow a teepee of beans for my son.

here is picture from the book the 1981 edition of Mels book showing the 8 per square foot spacing.

@miinva wrote:I grow my peas in a long narrow bed in a single row on either side of a rigid cattle panel. I planted my pole beans 9 to a square and got a TON of beans!

I can second your observation that different pole beans have different color flowers. My two were creamy white and pink.

Do you have any other pole types that are good for pod-eating?