May Avatar: Not Just Veggies! (click this)
Welcome to the Official SFG Forum
!!! Happy Gardening in 2020 !!!
Search
Latest topics
» What new seeds are you saving this year?
by plantoid Yesterday at 4:59 pm

It was a tomato soup kind of day.

Cold, windy and rainy weather sends me to the kitchen in search of comfort food and what better than tomato soup. Having an abundance of tomatoes stored away in my over packed freezer from my summer organic garden adventures, I decided I would make some room by using some of my supply.

Started out sauteing a big onion and 10 cloves of garlic (also from my garden). Dumped in a huge amount of tomatoes and added some balsamic vinegar, salt and pepper. Brought it all to a boil and let simmer for 2 hours or more. When done, I added two heaping table spoons of basil and some brown sugar to taste. Put the boat motor mixer in the pot and worked until it was blended and smooth and then strained it into a very large SS bowl. Yielded about 1 1/2 gallons to put back into the freezer for even colder days ahead. We love having food stocked away for quick easy meals. 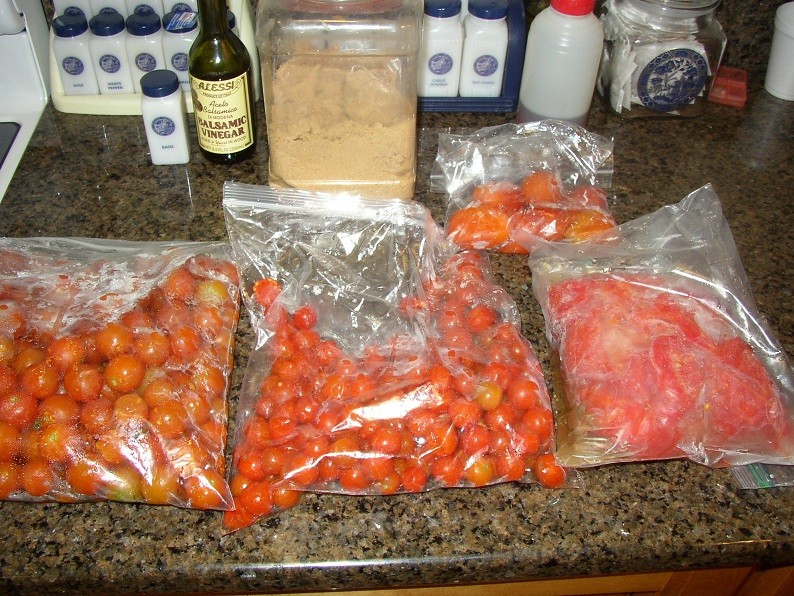 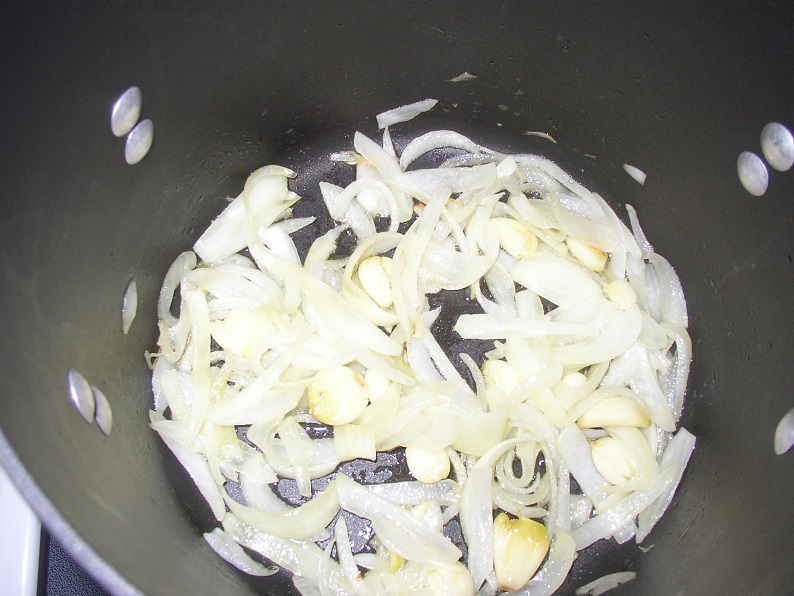 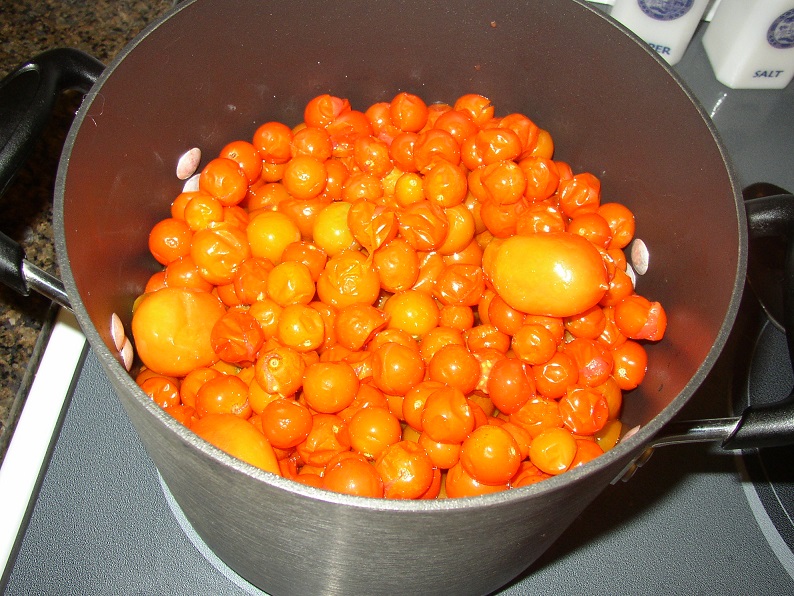 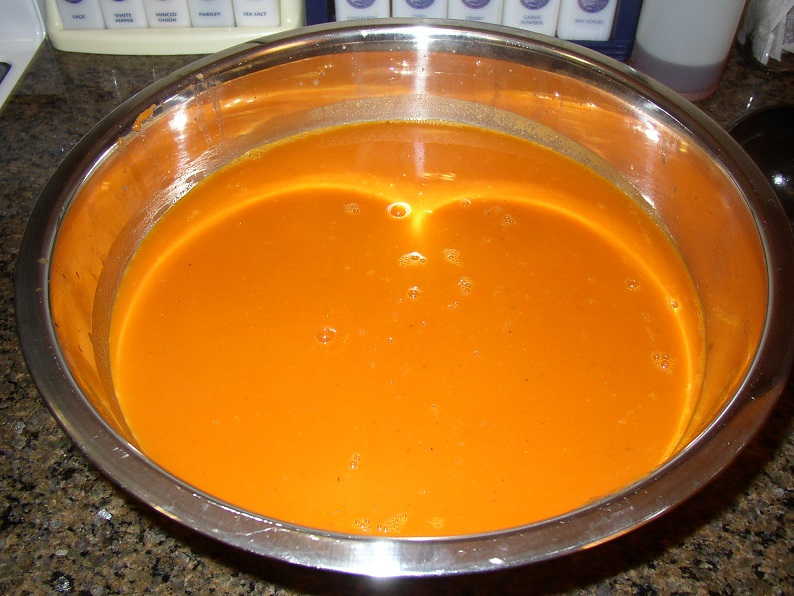 I've not yet been able to get a  colour like yours .

It seems that I've also  tended to undercook by about an hour as my tomato soup looks like dirty dish water .

Have you also added cream or  milk to it to cream it ?

I've not yet been able to get a  colour like yours .

It seems that I've also  tended to undercook by about an hour as my tomato soup looks like dirty dish water .

Have you also added cream or  milk to it to cream it ?

No milk/cream added on this batch David, it was good without it.

Very pretty soup. Never thought of putting balsamic vinegar into it, though I have put vinegar and lemon into some soups to brighten them up. Lentil soup especially seems to benefit.

I roasted one acorn squash and three butternut squashes yesterday; two of the butternut were the biggest I had ever seen. Store bought, as mine were a complete bust this year. Scooped out the smushy innards and put them into two large containers that went into the freezer for butternut squash soup sometime soon.

Speaking of lentil soup, this is the perfect time for it. Think I'll make some.

I nearly broke down and cried tonight

Earlier today we defrosted the deep chest freezer out in the garage ..first time in three years so it's not that bad


Lurking within the depths of the freezer  I found the following vac packed heat sealed  packs of 8 July 2011 parsnips , 2 pints of chicken stock going a decidedly orange colour dated  23 March 2012 . a pint of chicken stock dated ??  March 2013 , a 1/4 pound of carrots baton August 2013 and some unknown undated  broken up herbs ( don't think it was cannabis

I dropped the lot into a big heavy saucepan , added the juice off the lunchtime roast ham joint , the  4 ounce remains of the ham chopped up fine, two large fine chopped onions, three out the  garden  medium fine chopped carrots . two cloves of chopped garlic ,1/2 pint of fully skimmed  milk ,. 1/5 pint of double cream & a pint of water .

Got it all boiling , turned it to a simmer for 2 hrs. it reduced by about 2 inches down the pan.  Then I hit it with the hand held electric whizzer for 30 seconds or so  and turned it into one of the finest soups I've ever produced.


We had a delicious evening meal of this home made soup with fresh home baked crusty bread rolls.

After the tea meal I started to put the excess soup into two vac pack bags , 3/4 of a pint in each bag .
Filled the first bag , stood it up against the wall by the sink and filled the other . I started the heat sealing was pressing the heater bar when the first bag slid over open end onto & down  the draining board , the soup came out all over the draining board and behind the tap pillar .

A few mild cusses here and there then started laughing at an idea .....that started to grow inn my mind ..the more it grew the more I laughed ...
So .... I got a drinking straw and had some cold soup off the draining board

, couldn't reach the back of the board and was unwilling to wipe it away down the sink as it tasted so good . .

" Merle , here boy, Merle come here... "  Made him sit whilst I arranged the dining chairs so he could stand on them on all fours and lap up the soup . Then told him it was OK to HUP and walk to the soup .
He was having none of it,  as he knows dining chairs , kitchens and our food is VERBOTEN . So I dipped my fingers in the soup gave him a lick of my fingers and told him " Yes" .

That's the fastest I've ever seen him move .. up onto the two chairs like a flash and cleaned half the sink , but as you know most dogs are stupid,  he couldn't reach the back of the board no matter how hard he pushed against the draining board . I touched his right front paw to get his attention , tapped the edge of the board and said Yes .. he quickly put both front  feet on the drainer and got the last of the soup .

Once it was all " doggone " I told him to leave  and get down " go out kitchen " .. .which he did ..,  fine I thought job well done  as I cleaned the few remaining traces of soup up and poured a bit of bleach in the rinse water to do the job properly .

Suddenly I found a big black dog head butting me , wagging his tail like mad .. reckon he likes my soup as well.
He stayed close to me for a good hour , often giving me the little nuzzles and grrrrr's of happiness.

Cute story, thanks for sharing.

Great experience with bow wow David and thanks for sharing. I love making soup and the possibilities are always endless.

It was a soup knid of weekend! I made minestrone on Fri and chili on Sun!

WOW! That takes tomato soup to a whole new level and sounds wonderful. You have once again inspired me and will be trying this out.

Bob,
I have this crazy thing for tomatoes at the moment and can't get enough. Been having that soup for 3 days.  Then at a Bob Evans restaurant today went and ordered a large glass of tomato juice with the meal.

Heheh! It's really hard to get enough. Last growing season we ate a lot of our own, and baskets worth of maters from a neighbor's garden, too. And when we were done eating all the ripe ones, we couldn't get enough of the green ones, either fried up or turned into apple-tomato chutney. Don't feel alone -- there's almost no limit to the tomatoes I can eat either!

I'm pretty much the same with citrus. I could easily eat a half dozen oranges per day, if not more.

Today made the weight watcher version of vegetable soup.  Some of the ingredients were used from the garden such as garlic and green beans.  Unusually cold and snowy around these parts so hot soup is grrreat.

@llama momma wrote:Today made the weight watcher version of vegetable soup.  Some of the ingredients were used from the garden such as garlic and green beans.  Unusually cold and snowy around these parts so hot soup is grrreat.

I remember that recipe.  Zero points!

That's the one!
Unlimited portions allowed, or until the digestive system revolts.  I like to add a little protein to it like grated cheese and a little slice of cheddar.

@llama momma wrote:That's the one!
Unlimited portions allowed, or until the digestive system revolts.  I like to add a little protein to it like grated cheese and a little slice of cheddar.

Does it make the digestive system

I think cabbage is a common cause of digestive upset for people.  I've been blessed with an old fashion constitution as the grandparents might say.  Some classy topic eh?

Done!  Let me know if you have any questions.  The measurements are all US where T=tablespoon, t=teaspoon, and c=cup.

Done!  Let me know if you have any questions.  The measurements are all US where T=tablespoon, t=teaspoon, and c=cup.

ohhhhh.... thanks herblover, I'm going over there to snag a copy for myself.