While we dream of lush vegetable gardens next year, we look thru our seed catalogs and make plans to set up seedling nurseries and plan for light, water and starter medium.

I guess what I am saying is I am ready to start planning my indoor plant nursery.

I actually need to start my Artichoke seeds in December or January.

I remember a post about air pruning starter pots and can't remember where I saw it or who wrote it. Search feature not so much help this time.

Any suggestions for successful seed starting are welcome.

Is this the thread with the pots Furbalsmom?

Thanks, that is exactly the one I was thinking of.

I started seeds indoors last year, and some were successful and others not.

This time I want to plan things out and have a procedure in place instead of winging it like it did before.

ooooh, Artichokes? Do you have a line on a short growing variety?

The artichoke variety I am planting is Violetto from Territorial Seeds in Cottage Grove Oregon. Violet bracted choke has a small oval slightly elongated flower head 3 X 5 inches. New variety to me. Hardy in zone 6 and above,
They specify may not mature the first year in Zone 6 and lower if seeds are direct planted in the ground. Matures later than Green Globe

They recommend Imperial Star for plants grown in lower zones to be grown as annuals because they may not perinnialize (is that a word?) in zones lower than 7. Imperial Star grows 6-8 bracts per plant, 4 - 6 inches across and is nearly spineless. Good flavor, I have grown these. Earliest maturing.

Green Globe mature earlier, but again is not hardy in zones less than 7. Lower zones, grown as an annual with 3 - 4 heads, 3 - 5 inches across with nice thick hearts.

Indoors, plant seeds in late January or Early Feb transplant 8 weeks later when soil has warmed. Here the ground doesn't hit 65 degrees until May or even later

Furbalsmom- So I understand correctly....

I am 5b, so that is a lower zone right? And the artichoke that would work best fro me would be Imperial star?

I make my own air-pruning pots.

Its very easy to make your own. Gather those 2-liter plastic soda bottles.
Cut them down to 4"-6" tall.
Hammer holes with a Phillips head screwdriver in the 5 lowest lobes of the bottles. (I take mine outside and hammer on the lawn)
With a sharp scissors, I cut a slit from the bottom holes up about 3 inches that is about 1/8th" or so wide.
Its ready.
Fill with your favorite growing medium, transplant your smaller transplant into this larger one, set it under lights and watch them grow for another 5 or 6 weeks into strong healthy seedlings.
If you are moving tomato seedlings to the larger pruning pots, bury the seedling deeper in this pot to strengthen the main stem.
When you transplant, water them first and they will slip right out of the pot when you turn it over with the stem braced between your fingers.
The root is not disturbed.
I washed my pots well with detergent to use them again next year.
If you are worried about transmitting diseases, you can wash with a bleach and water solution. 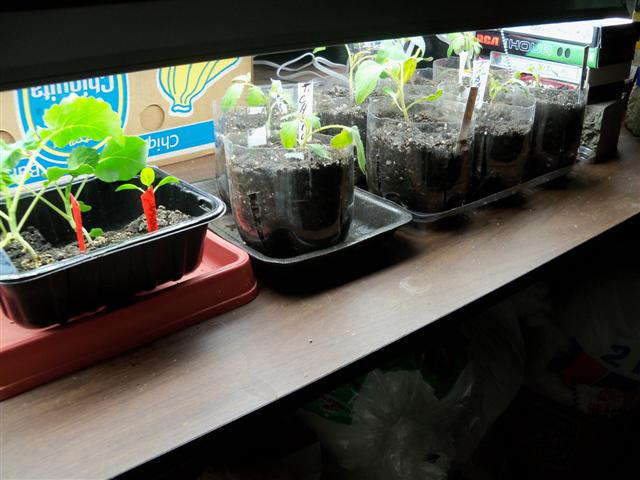 The air-pruning pots are the clear ones on the right.
You can remove the labels on the bottles or not. Its up to you.
I used 2" soil blocks after the seeds germinated and then transplanted those blocks into the air-pruning pots after 2-3 weeks.
When the roots of the plants reach the air, they stop growing around in a circle so you don't have that girdling problem when transplanting.

Jennie, From what I have read, Imperial Star is better for lower zones like 5, but it will not grow back a second year, you have to treat it like an annual. You do need to start your seeds indoors beginning in January or February, according to the package.
I am all excited about starting Artichokes from seed. (by the way the seed life is only one year, so you have to buy new seeds every year. The germination rate is only 70% and then you have to cull up to 20% of your baby plants because they are useless due to being too small, albino or other non productive plants) But I don't care, I want to grow them from seed.

QuiltBea, thank you so much, this air pruning pot is exactly the one I was talking about. Did the the bottles work just like you thought they would? Did you have much transplant shock when moving plants into the garden?

I just want this coming year to go well as I am building my first New SFG and using complete Mel's Mix this time around. The last two years were using amended soil in an exisiting raised garden bed and the weeds almost killed me and my plants too.

Furbalsmom...what does cull up mean?

Thank you for answering all my questions!

To cull plants is to take out and remove the less desirable ones. Kind of like thinning the ones that are not the best.

So, up to 20% of your seedlings should be pulled up (culled) because they are not good plants. (albino, small underdeveloped, etc)

If you are moving tomato seedlings to the larger pruning pots, bury the seedling deeper in this pot to strengthen the main stem.

We were having this discussion in another thread & I didn't know why the transplants were partially buried each time.... just knew that was how we were taught.

So it's for the stronger stem??

Acara, stronger stem and more roots. Roots will grow along any portion of the tomato stem that is in the ground. All those little fuzzies on the stem are potential roots.

@Furbalsmom wrote:Acara, stronger stem and more roots. Roots will grow along any portion of the tomato stem that is in the ground. All those little fuzzies on the stem are potential roots.

Just one of my many hang-ups .... always like to know "the reason behind the rules"

Furbalsmom......I had no trouble with the plastic bottle pots. And no trouble getting them out of the pots so no transplant shock to the roots.

I now like to cut my bottles about 6" deep for the tomato plants so they have room to grow more and stronger roots before going into the garden.
Cutting them 4" for other plants is fine, like broccoli, cauliflower, peppers, etc.

This was only my 2nd year at SFG and I learned from errors I made the first year.
You, too, will learn what works best for you.
A little experimentation now and then doesn't hurt. Things that work for me may not work for another person.

Do you trim the section that your going to bury while transplanting (how I was taught), or do you just bury it, horizontal stems, leaves and all ??

And of course ... the obligatory (why) ,,,if you know/suspect, have an opinion

I snap off the foliage on the main stem that is going below the soil. Rationale: so it fits better in the hole.

I always leave the leaves (sorry! silly English language) on when I bury them... I'm always hoping they will somehow turn into roots.

put your zip code in the box for your local dates.
Best Planting Dates by the moon

When transplanting tomatoes, I always remove any leaves that would be coverd by soil. The instructions say to do it and I assumed it was just like when you put flowers in a vase of water, you remove any leaves below the water line so they won't rot.

camprn.....thanks for the site. I printed one for my area. I'll keep it as a reference for next year.

Quiltbea, thanks for the response yesterday re Air Pruning Pots. I will have to find a source for those 2 L bottles since I use canned sodas. How do you think a half gallon plastic milk jug would work using the same principles of holes in the bottom and slits up the sides? The only difference I can figure is that the jugs are not as clear as the 2 L bottles and the shape is a little more squared. Don't see how that could be bad.

Furgalsmom......The milk jugs should also work because the containers do not need to be clear. Any color will work. They'll just be a bit wider but that's not a problem except it uses more starting soil.
One must make use of what's available and I'd use them if I didn't have 2-L soda bottles.

I've even used the 16 oz soda bottles to start seeds for plants that won't need to be around long, like cukes and melons, since I only have them around one or two weeks before setting them outside.

That's a good idea to use the 16 oz bottles, I always have 1 L water bottles available. I'll just have to remember to use them for planting the big seed items that get transplanted outside after just a short time.

I've been looking for this thread for an hour now. Amen, I was starting to go cross-eyed.

Questions I have (please forgive me if you've stated it before, I tried to read every post fully) for quiltbea (mostly):

1. Do you start your seeds in some of those planting soil things? Like the peat moss disks, or do you make your own. I know you've said something about soil block you move them too when they germinate, but I'm still a little confused. About the first and second step and what your using.

3. Just asking anyone's opinion on this one. We don't usually drink from 2-liters, but I do drink about 1 Diet Dr. Pepper a day from their 16.9 fl oz bottle (six pack size). I also don't keep anything bigger than a half-gallon for milk, and I don't go through it fast because I don't use it that often (cheese makes up for the milk

), so does anyone have a recommendation that I could use instead of the 2-liters? The dollar store I know has the plastic cups that you reuse (not like the solo cups, like the heavier duty ones). Do you think those would work/be big enough?

4. When you start your seeds, do you start more than one in the same piece of soil and thin them out when you're putting them to the second stage or do you just start only one seed at a time and make up for a few not sprouting by starting more than you need?

5. Do you soak any seeds you start, put the chill on, anything like that, or do you just take them out of the packet and start them? I know some seeds your suppose to chill them because you have to trick them into thinking it's fall/winter, and I've read a few places that soaking the seeds for about 30 minutes before you direct sow or seed start indoors is suppose to help.

I think that's all. I ask because since going through my seeds I'm just determined to grow my tomatoes and peppers that I have gosh darn it, I picked em for a reason, and it would be cheaper to just pick up the supplies I need I'm sure. I already have a small grow light, and an aero garden I can utilize for it's light, plus gurney's has their $25 off a $50 purchase again and I've been wanting to get another grow light anyways. Blabber blabber blabber. Sheesh I just don't shut up sometimes.

(seriously) I am sure I will find something in that catalog that I just cannot live without.


Years ago, before I had a greenhouse business, I used the 2 liter cola bottles too and I loved that they were clear so I could watch the roots grow.

I miss that. Now all my plastic containers are green or black.

(i could do just one or two---for old time sake)