I am new to SFG and I was planning on buying a few tomato plants for the garden. I will be putting in a trellis like the one in the book. My problem is that places around here only sell bush-type tomatoes, but not any vine ones. If I use a bush tomato, what's the best way to support it?

A tomato cage works for me. They don't grow very big usually. Of course, it depends on the variety but most are from 2 1/2 to 3 1/2 ft tall. 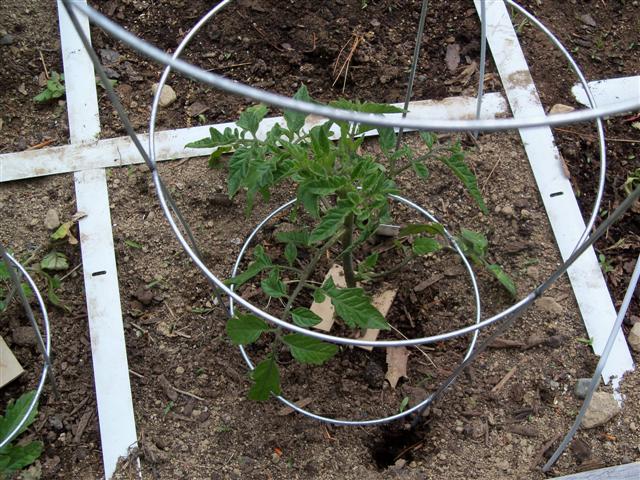 here's one of my Oregon Spring toms last May with its tomato cage. It worked well all thru the season.

This is my first time growing vine tomatoes. Last year I grew bush varieties. Any advice, suggestions? How do I get them to grow up the trellis? Right now they seem to be going straight up.

@buttaflie143 wrote:This is my first time growing vine tomatoes. Last year I grew bush varieties. Any advice, suggestions? How do I get them to grow up the trellis? Right now they seem to be going straight up.

buttaflie,
When the tomato vine gets tall enough to bend through the bottom spaces of your trellis netting then reach through the space and gently pull it through. You can tie it loosely to the trellis if you like, but I never found it truly necessary. In two or three days the vine will adjust itself to its new angle and the top will start growing upright again. It is important to remove the suckers in the leaf axils as this will make training the main vine through the trellis much easier. If you let the suckers grow, you'll have one big bushy mess on your hands! If you accidentally break the top (been there, done that), let one of the suckers grow!

I found a couple of pictures to show you. You can see the bottom curve of the vine hangin over the back of the trellis. In the first image I drew a yellow line over the vine so you could see how it winds over and under the trellis netting. These were my Opalka paste tomatoes and those are 6-foot trellises! The photos were taken in September, so at that point the tomato vines had already topped the trellises. I did eventually cut the tops off. Any tomato that comes on that late in the season is not going to mature anyway. 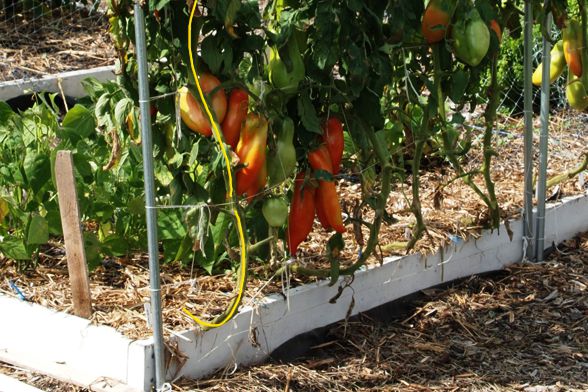 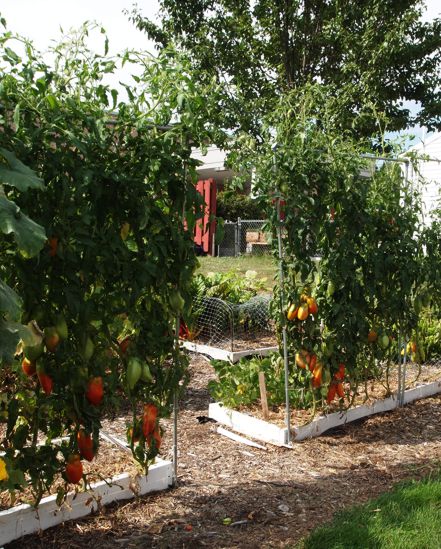 These Opalka tomatoes have very wispy-like leaves and they grow REALLY fast when the weather stays hot. One week away and many of the suckers were ahead of me! We had drought conditions last summer, but that didn't seem to bother these tomatoes. I did add straw mulch around the base to help retain moisture.