» Panic Buying due to Cornavirus Pandemic
by sanderson Today at 5:54 pm

POLE BEANS: I screwed up....now what?

POLE BEANS: I screwed up....now what?

I guess I am a very literal person...

When the seed package said plant at the base of a tripod shaped poles....well I made a tripod with stakes and planted....I've got plants running up the poles now and I am realizing...there probably should have been cross bars between the poles? I don't even know if there is anything I can do now....any suggestions?

I feel like a complete idiot. I've never seen a fresh bean or plant for that matter. I really wish there was a gardening for really really really big dummies book, that didnt assume that you knew anything.

middlemama I planted pole beans and I thought that they were bush beans so when they started to grow I seen they were climbing beans so I stuck just one pole in the ground and they grew up it and then I had to use something to prop the pole up cause it started to fall over,finally it reached a trellis on the SFG next to it,the beans are doing fine,it might not look great,but I bet the beans will taste just as good. So I don't think you can mess it up,I bet they will grow on what you have for them.

Middlemamma, I think you are fine. You don't need crossbars for beans. Unlike tomatoes which need some help, pole beans will grab on.

This is my first year for pole beans too. I wanted to grow them in a "Three Sisters" configuration, where they grew up on cornstalks instead of poles, but I messed up by planting the beans and the corn at the same time, which resulted in the corn not being big enough to support them at the right time. They happily grew up my trellises instead, but they would have done fine on poles also. The only thing I wish I did differently was to have the trellises be taller... as what has happened is the beans got quickly to the top (6.5-ft trellis!) and then sort of coiled back and forth on top of each other. (Long story... I do have a pole extension on one side of my trellis!) But they have been happily blooming and making little beans ever since, so no harm done.

One thing that alarmed me a little was that a few of my beans seemed to be following the same path... 2-3 stems that would go upwards in the same route and twisted all together. If that is happening for you around your poles, don't worry about it.... they do not seem to choke each other out. You are probably going to see that happen when your beans reach the top of the tripod -- you will have more plant material packed in closely.

The other thing I realized while my pole beans were growing is that while the main plant goes straight up, they also send out side runners which will hang loose and sort of float around with the breeze until they find something else to latch onto -- and that 'something else' can be themselves, making beany runner tangles. Or corn, or whatever other tall plants you may have nearby. I am starting to have everything grow into everything else.... a bit confusing, but it seems happy enough. 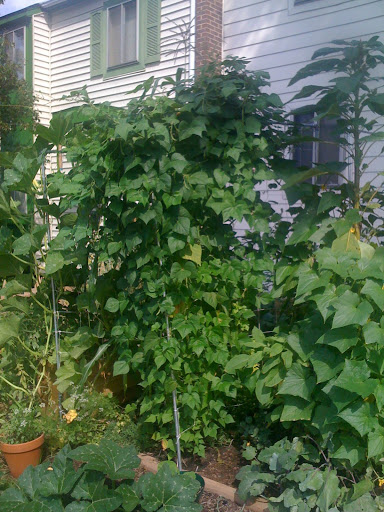 I planted mine around poles too. Beans will simply climb, they don't need no stinkin' crossbars! LOL. I echo Josh and Megan. No worries. It looks messy and disorganized, but it works.

The ones climbing up my corn are just starting to produce. My only problem is finding all the vines and then being able to see the beans. I may have to start freezing soon. I am not prepared to can non-acid foods at this point.

Middlemama, I've never placed crossbars on my bean teepees. The beans just grow off the top and sometimes fall back down, and usually stop growing at some point. As Megan said, they will wrap around each other and give additional support.

I planted what I thought were Roma II bush beans this year, but they started putting out runners. I wasn't sure if my beans were mislabeled, or if that was normal for Roma II bush beans, so I emailed Randel at Baker Creek Heirloom Seeds (rareseeds.com) where I purchased the seed to see if anyone else had reported similar behavior with their Roma II beans.

In his very nice reply he said it would be better if I could give the runners some support, but he went on to say, However, if that is impractical, it won't hurt the vines to sprawl, although a few pods might get spots or mold from being in contact with the ground.

Runner beans are grown on support to save space and make them easier to pick, but apparently it doesn't matter to the beans whether they are supported or run on the ground. So I'd say whatever you can do will be fine.

My bush/runner beans have spread on the ground in their bed and snuggled up with my nearby sweet potato vines, and both seem quite happy. It's more difficult to harvest the beans, but they're nearly ready to pull up anyway. I plan to pull the plants and place them next to the sweet potatoes as mulch, rather than try to untangle them.

(BTW, Randel offered me a replacement pack of seeds or a refund but there is no need since I'm harvesting a tasty bean from these vines, even if I'm not sure what variety I have. Still, I thought it was nice of him to offer.)

I did the opposite....I have a nice trellis but planted bush bean!

Thank you everybody....I feel much better.

Glad to know at least they aren't picky plants lol.