» Panic Buying due to Cornavirus Pandemic
by sanderson Today at 5:54 pm

Weather tonight - supposed to get down to 32* F for 2 hours.  So I put my Christmas lights out and covered this bed as much as I could.  This 4 x 8 bed has a trellis down the middle so trying to cover it is a pain.  The temperature inside the hoop house is 55* F and it is 37* F outside.  So they should be okay today.  These  peas can easily withstand the lower temps except the flowers and peas will be damaged.  I have a lot of English Peas (Strike Bush) setting on and want these to mature in the next few days. 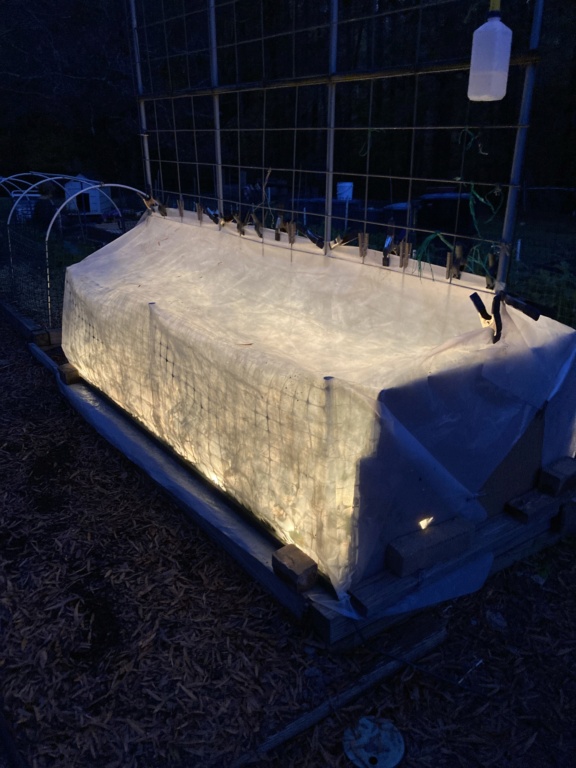 @sanderson wrote:That's a nice cover you have designed.  Gable roof for shedding rain.  Did you use 3 or 4 mil plastic?

6 mil.  Did you ever grow Strike Shell Peas.

Yes.  After I ran out of the seeds you sent me, I bought a big pack from Territorial Seeds.  I have two 2' x 4' beds growing now.  I would have planted more but that was all I could get going after being incapacitated for 3 months this year.  Dang, I wish I had more beds.

I spent the last few weeks rebuilding and adding compost bins.  Trying to organize my composting and storing operations.  I had a very well built 3x3x3 compost bin but had to empty the contents on a tarp and then mix them up and add back to bin.  So I built a 3x3x3 hardware cloth bin next to it to make it easier to turn the compost.  I then added two more compost bins to hold leaves and turn them when necessary.  The bin on the right is the well built compost bin with slats in the front that can be removed as the level of the compost goes down.  Then next to it is an empty bin that can be used to turn the compost.  Then to the left of that, another empty bin that can be used to turn the leaf bin.  Then to the left of that a bin full of shredded leaves.  I had to add a cardboard extension to the top of it to make it 4x3x3 because I had so many leaves. 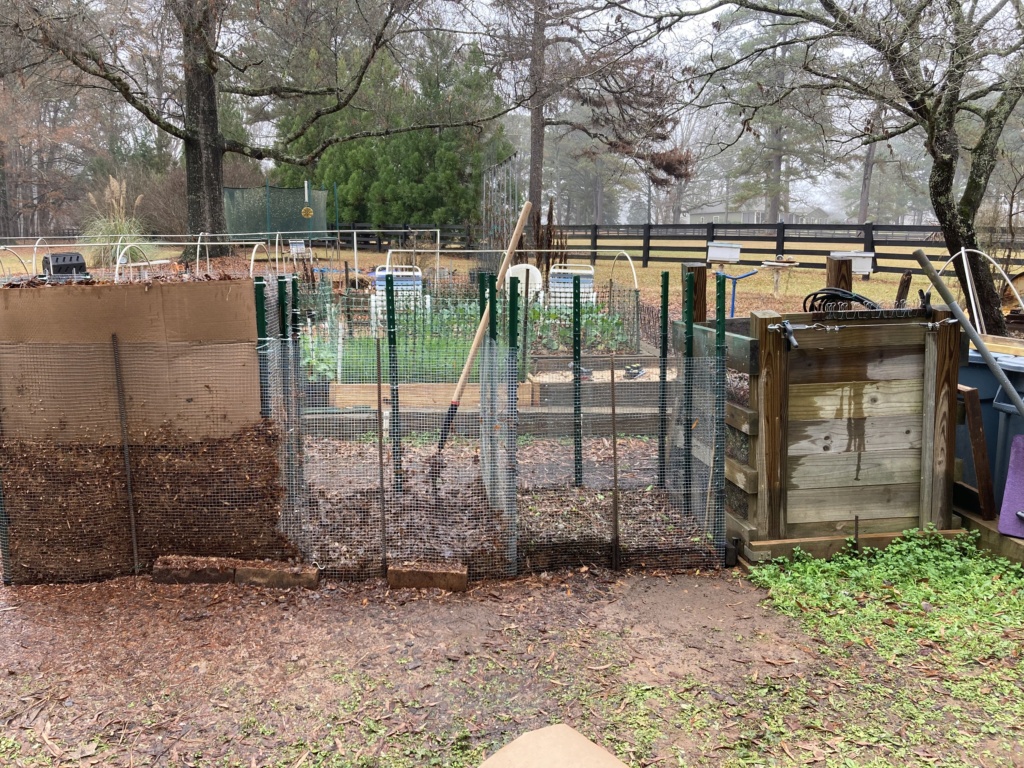 These are my leaf bins.  I eventually combined them into 1 bin so now I have one bin overflowing and one empty bin. 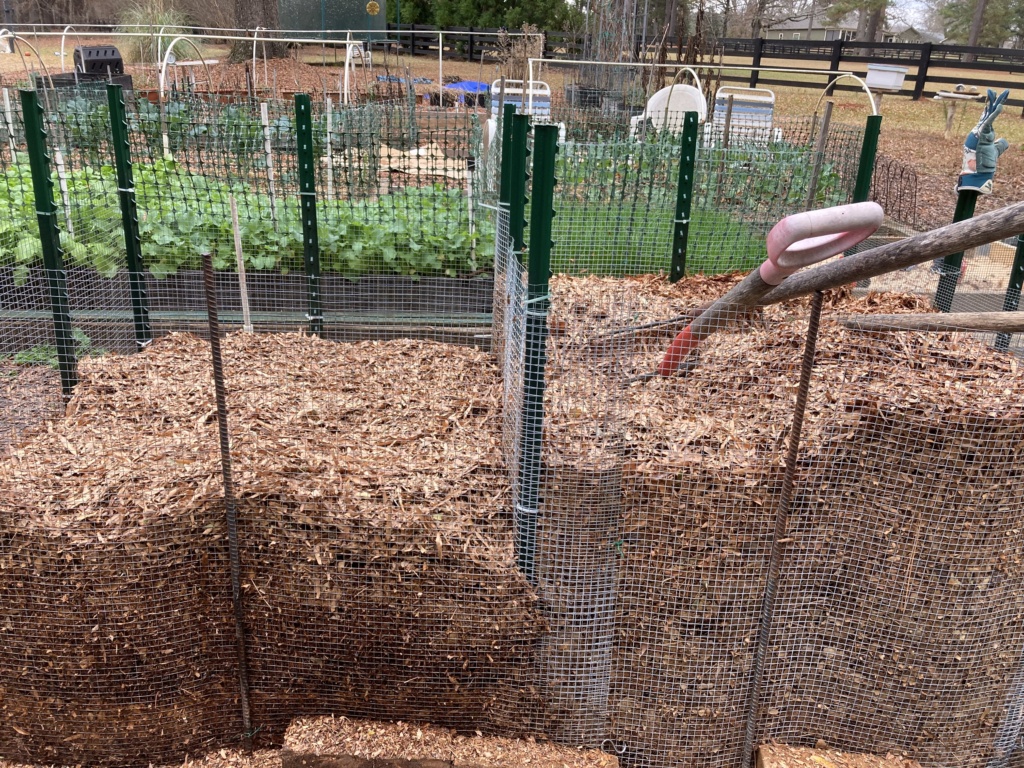 Final leaf bin.  I added hardware cloth extension to three sides and then a cardboard extension in the front which I will remove when the pile shrinks. 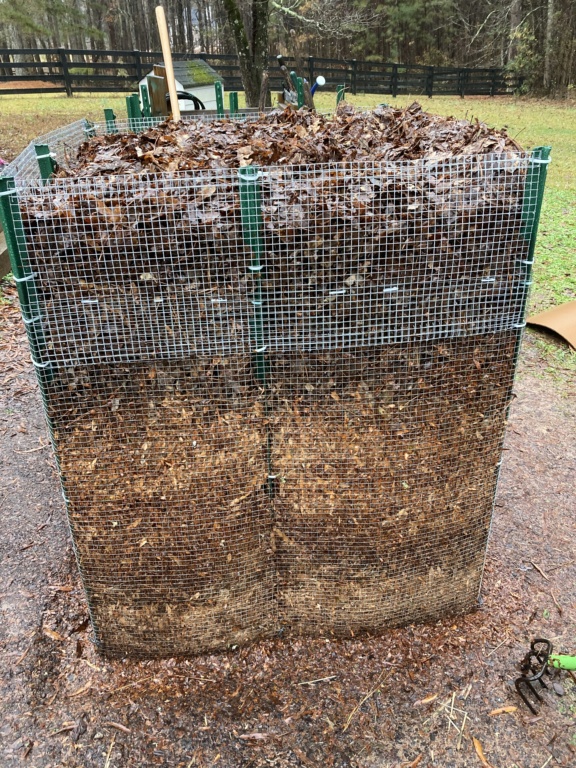 Then I organized most of my storage bins (garbage cans).  I have been purchasing one Brute Garbage can every year and I now have a good number of cans for storage (still need a few more).  In the two largest cans I am storing my finished compost.  Then in the next bigger cans I am storing finely shredded leaves in one and soil in another.  In the two smallest cans I am storing dechlorinated water and coffee grounds.  I still have a few more cans in other areas for wheat straw and vermiculite and pine bark nuggets and peat moss and purchased compost etc. 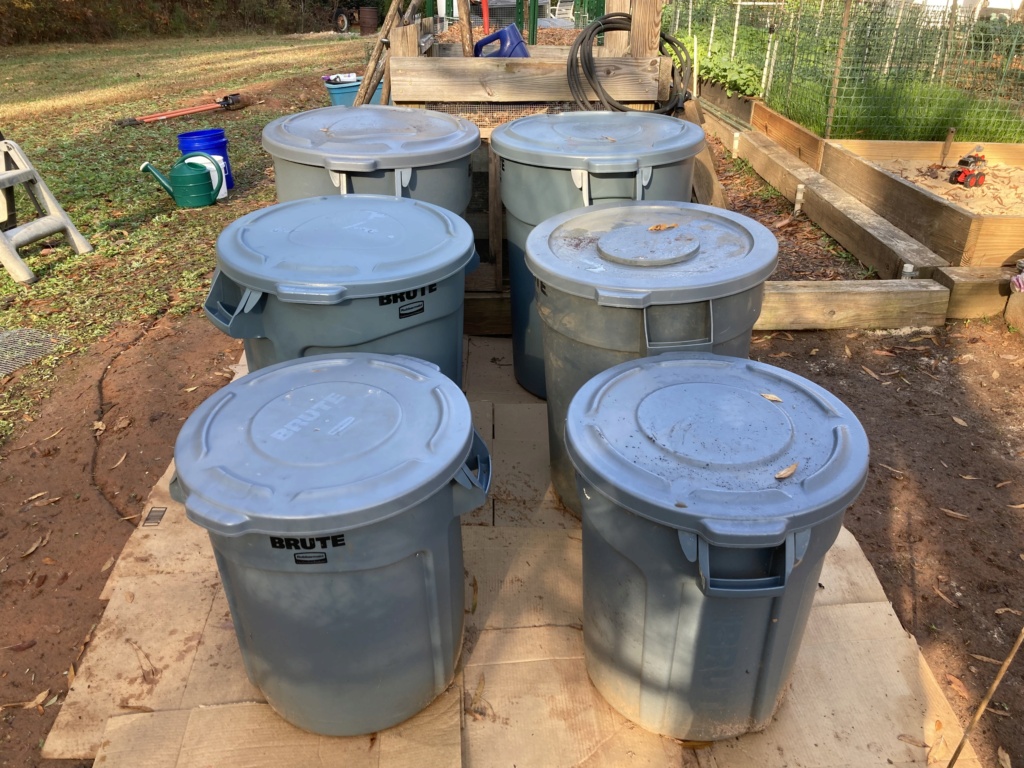 @sanderson wrote:You did a wonderful job expanding and organizing your compost operation.  Question:  Do the new wire cages have one side that opens for ease of turning?

Yes the wire bins have one side that opens for ease of turning.  One wire bin has one side that is split into 3 different pieces of hardware cloth so I can open the top 1/3 then the next 1/3 then the last 1/3.  That one is real easy to turn.  The other two wire bins have one side that can open but only a single sheet of hardware cloth on that side.    My intention is to split the front of these two bins so that you do not have to open the entire front.  I will do this when they are turned.