We are using 6" pine to build our boxes and have some concerns about them breaking down too fast do to surrounding grass and a sprinkler system. Anyone have any experience with the life of there boxes untreated?

Before I knew about square foot gardening, I had built a 40 foot long 12 inch high box out of untreated 2x12 Douglass Fir against my back fence. It was filled with the topsoil I dug out of my back yard to put in a patio. That was 4 years ago and I am just starting to see signs of rot this year.
You did not specify the thickness of the pine you used. 2 inch (actually 1.5) thick will be fine for years if left untouched. I am not sure about the .75 inch stuff though.

I made 7 (so far) 4x4 boxes out of 2x6 untreated wood this year to start my first square foot garden. I expect them to last at least three years.

I don't use a sprinkler system, but I used 1X6 pine last year and all my boxes are completely usable this year. Last year I had no choice but to pick immediate cost vs. longevity. But who knows -maybe I'll get three years out of them.

Some of my beds are made from used 1x8s that had been sitting outside for 2 years. I'll get at least 2 years out of them, perhaps more. One thing you can do to help them last an extra year is to paint them. That way any rot will only eat away at one side, not two.

I too am curious as to how long pine would last. I plan to build a 2X8 made out of untreated pine. I plan to paint the outside of the box to protect it from the elements.

I'm sure pine will rot from the inside but how many years until it starts to rot?

I used pine and I don't recommend it. I chose it based on price and if I had to do it over again I would still use it because it made the difference between being able to start a garden and not. But that being said, if you can afford better wood, like cedar I would suggest it.

I have an auto sprinkler and live in the desert. Which means we waist a lot of water watering the lawn for a very long time (otherwise it reverts back to a desert quickly.) The wood gets pretty soaked. If you can keep the grass around it cut very low it wouldn't be such a problem but for some reason not only do my plant in MM do so well but apparently the excess nutrients draining out are also enjoyed by the surrounding grass, which grows thicker now around the boxes and more quickly. The long grass also helps keep the boxes moist and wet. I made my boxes in March and I can see signs of deterioration already. I think they will work for a few more years but they don't look very nice. So.... in short, if you suck at regular yard maintenance like myself, go cedar.

How long does pine last.

I used a 4" x 4" fir post one time for a mail box post. Lasted about 2 years. What a waste of time. Composed into the ground just great.

I have used 2x Lumber for years, untreated, whitewood from the big box stores. My location (Michigan) doesn't get a ton of terrible abuse from the sun, unlike other locations. The UV rays do a fair amount of damage but nothing too critical.

The last boxes were used for 4 years... I ripped them up from the ground, because I was doing pure Mel's Mix this year, and there was some rot on the bottom of the box, but the majority of the box was fine. I figure I had about 4 - 6 more years on them before they would be unusable. The inside of the boxes were fine, just the bottoms were rotted. I figure in my climate, 1x lumber would give about 4 - 5 years total before they should be replaced. After all, they are just there to hold in the Mel's mix, most of the box has virtually no structural load of any kind.

I happen to like the weathered natural silver grey look of old wood left exposed to the elements, so I refuse to paint it. My trellises (made of 1x wood) I have used for 4 seasons, and I have only retired one of them (one I left uncovered outside in the winter - I think the freezing ripped the joints apart), they're not in contact with the ground much, but they have held up better than I thought they would.

The only issue I've ever had was when I built a sandbox for my kids under a tree. Turned out the tree had carpenter ants in it. The boxes still lasted a couple of years, but quickly deteriorated to mush. Just make sure you don't have termites and/or carpenter ants nearby and you should be fine.

However, when I replace my wood (and we will all have to eventually), I plan to use the landscaping timbers. They hold up much better than straight wooden 2x4's, etc.

This is my second year with my boxes built from pine 2x6x8, and all seem to be doing very well. I see very little damage to them, though of course they've greyed a bunch. I bet they'll last me for a long time to come before I need to rebuild them.

I'm thinking about building some new boxes in the spring, though, and I'm wondering if it'll be worthwhile to use composite wood. For how well my pine boxes are doing so far, I don't think it will be.

Here is a picture of a 3X3 box I made out of redwood plank from a big box store. It's untreated and was only in use for about 6-7 months. I also have a 4X4 box that was in use during the same timeframe that held up much better. I was surprised to see that redwood would deteriorate so quickly. 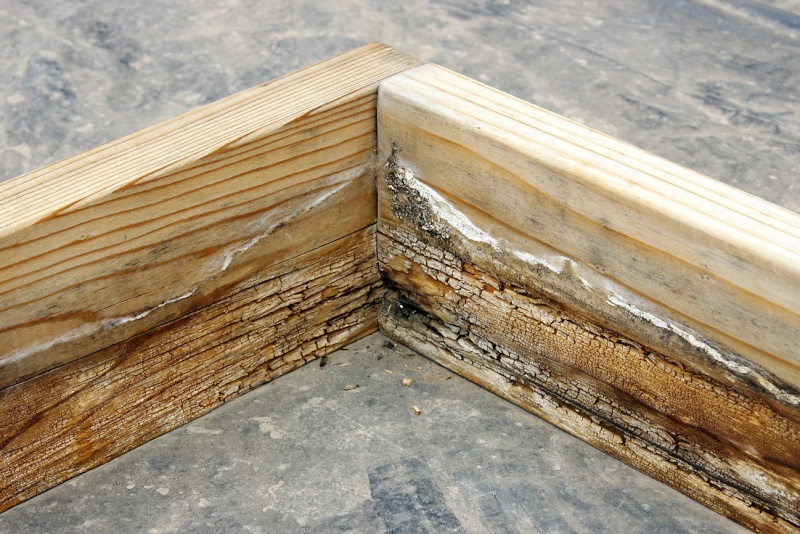 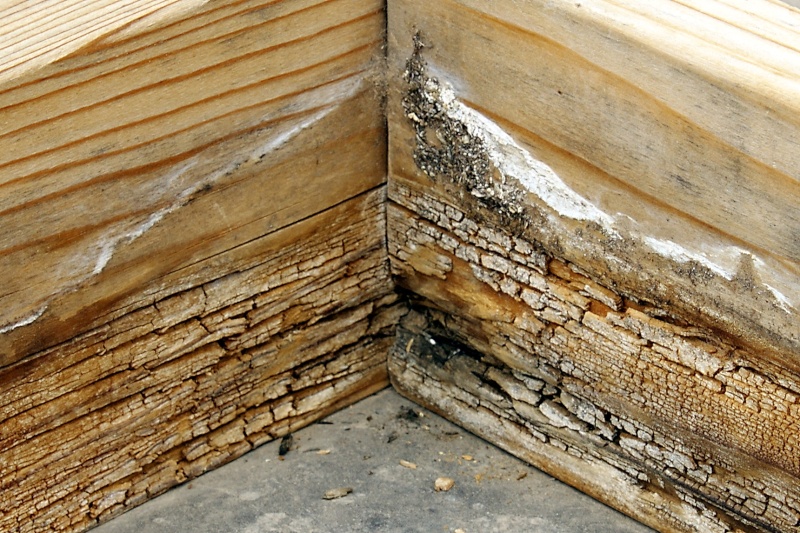 AZDYJ2K wrote:Here is a picture of a 3X3 box I made out of redwood plank from a big box store. It's untreated and was only in use for about 6-7 months. I also have a 4X4 box that was in use during the same timeframe that held up much better. I was surprised to see that redwood would deteriorate so quickly.

I'm curious to see that the redwood did so badly, I was thinking redwood, but if it's only going to do well for a year that makes me nervous. What are the recommendations for wood to use if budget isn't so much of a concern, or what should one do to treat the wood to keep it working for longer period of time. Sprinklers will undoubtably get my box under the CA sun since I have some and the lawn does have to be kept (at least for now).

By the looks of the wood, there are some pretty noticable white lines from the water. I recall that there were many times where the box was in standing water even though it was on top of gravel and raised several inches from any soil. Like I mentioned, my 4x4 is in much better shape with very little (if any) signs of rot. I'm hoping to get at least 5 years out of my boxes.

There are composite raised beds at the big box stores. They are more expensive than redwood or cedar but I'm sure they would last the longest. sfgteachers also sells them on her website. PM her to find out more info.